The box office receipts for ‘West Side Story’ and ‘Spider-Man: No Way Home’ show a worrying trend by Keith Garlington Special to the Democrat -Gazette | December 31, 2021 at 1:32 a.m. 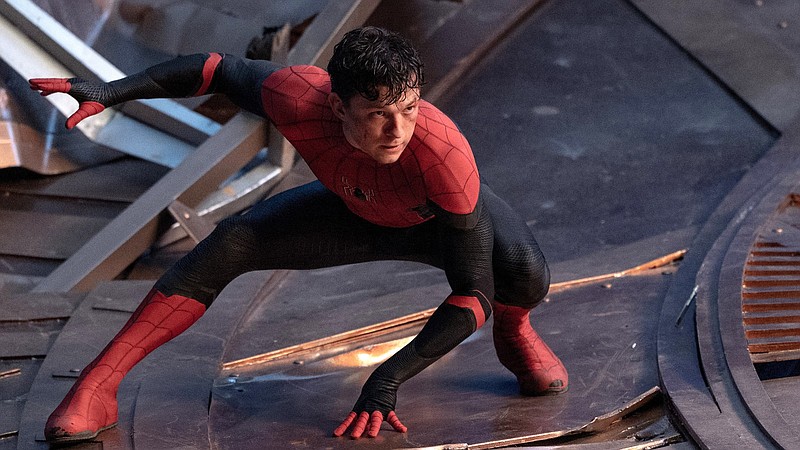 Despite not being released until Dec.17, “Spider-Man: No Way Home” — the seventh film in which Tom Holland has portrayed the post-adolescent web-slinger, and the third which revolved around the character — was the year’s biggest box office hit.

I'm not sure the movie business has ever been in a weirder place than it is right now. Watching movies has never been easier than it is today. Streaming services have literally put entire catalogs of feature films right at our finger tips. We can watch them on our big screen televisions, on our tablets, or on our cellphones. We can watch them in the comfort of our living room, on an airplane, or in a hospital waiting room. Streaming has changed the way movie lovers consume content forever.

But what about the way we once watched movies? What about the movie theaters? It goes without saying that streaming has cut into the movie theaters' business. Just how much is hard to say and it usually swings on a variety of factors (ticket pricing, size of markets, etc.). Yet while many movie houses and theater chains are feeling the impact, they are kept afloat by a select group of movies that fans will flock to no matter what. And while this steady trend helps theaters, it highlights a bigger concern -- one that could have a far-reaching effect on the kind of films being made.

Last week, filmmaker Steven Spielberg's sparkling "West Side Story" hit theaters. It's the latest movie from one of the most renowned American directors. The man who directed "Jaws," "Raiders of the Lost Ark," "E.T. the Extra-Terrestrial," "Schindler's List," "Close Encounters of the Third Kind" and "Saving Private Ryan" just to name a few. Yet his critically acclaimed musical adaptation only managed a paltry $10 million at the box office on its opening weekend.

Considering the lackluster returns on other 2021 movie musicals like "In the Heights" and "Dear Evan Hansen," no one was expecting record-breaking numbers from "West Side Story." But for a movie needing an estimated $300 million to break even, it's safe to say expectations were higher than $10 million. Within hours after the disappointing numbers went public, articles began springing up citing the reluctance of audiences to go to theaters due to covid concerns. Sounds reasonable and it's an explanation that would be easy to digest if not for one thing -- "Spider-Man: No Way Home."

Only one week removed from "West Side Story's" underwhelming debut, "No Way Home" (the latest installment in the ludicrously lucrative Marvel Cinematic Universe) has shattered records bringing in an astonishing $253 million domestically during its opening weekend. To add some context, this is the third Spider-Man movie to star Tom Holland as the beloved webslinger. The first Holland film brought in $117 million on opening weekend back in 2017. His second "Spider-Man" film raked in $92 million back in 2019. Both were pre-pandemic releases.

Suddenly the pandemic hesitancy excuse being made for "West Side Story" and other films doesn't hold as much water. Clearly people will still go to the theaters. But they're not going to see "West Side Story" or Ridley Scott's "The Last Duel" or Guillermo del Toro's terrific "Nightmare Alley," which just opened and could only muster an abysmal $3 million in its first weekend. Without question there are variables at play. For example, there are older moviegoers who would likely go see those films if not for covid-19 concerns. But differences in numbers this massive seem to indicate something else is going on.

To get a better grip of the situation all you have to do is look at the 2021 box office numbers. Eight of the top 10 highest grossers of the year were franchise movies. The two movies that weren't ("Free Guy" and "Jungle Cruise") are essentially franchise starters as sequels for both have been confirmed. So it's not hard to see what draws the most people to the theaters.

Tentpole blockbusters topping the charts is nothing new and they happen to be an important part of the movie business. But with the infusion of huge crowd-pleasing interconnected moneymakers like the Marvel films (and we get several each year), they seem to have completely taken over. And there's no sign of that changing any time soon.

On the surface those may sound like internal issues for the studios to wrestle with, but they very well could affect the kind of movies we get going forward. Blockbusters are earning money (minus the occasional bomb) and independent films kinda operate in their own sphere. But could we be heading to a place where original midbudget movies are too big of a gamble to make it to the big screen?

So what's the cause? Are we finally reaching that point where the influx of big-budget star-studded franchises has diluted the tastes of audiences? Deep down I don't believe it's a clear black and white concern. There are a number of things that factor into the equation including the pandemic and the increased popularity of streaming platforms. But I also believe something has changed with a fairly large segment of moviegoers.

With the exception of cinephiles who more-or-less watch some of everything, it seems a large number of people simply have little interest in seeing movies that aren't franchise-connected. Sure there are a few exceptions, but the numbers are pretty telling and the potential consequences are concerning, especially for someone like myself who loves small and midbudget features just as much as the blockbusters. What will it take to get people to try other movies? I don't know, but studios are feeling it. And at this rate you can't really blame them if they decide to cut their losses. I hope we never reach that point.

Scarlett Johansson in the long-delayed “Black Widow,” which was the fourth-highest grossing movie of the year even though it was simultaneously released on the Disney+ streaming service.