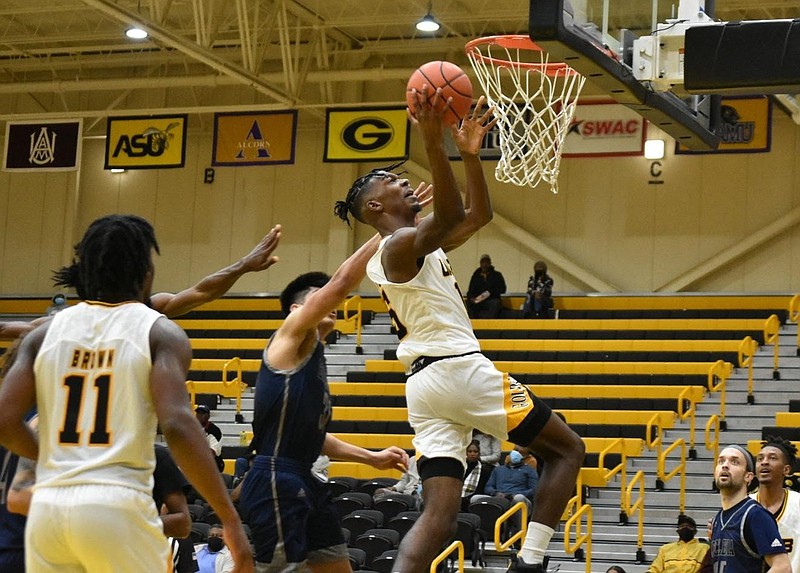 A.J. Stredic of UAPB scores a basket as he is fouled against Ecclesia College on Dec. 18 in Pine Bluff. (Pine Bluff Commercial/I.C. Murrell)

Southwestern Athletic Conference teams Thursday were informed of updated policies regarding men's and women's basketball games that cannot be played due to the covid-19 pandemic.

The conference announced a team must play if it has the minimum seven student-athletes and one "countable" coach. If a team does not have the minimum number of participants, the conference says, it can elect at its own discretion to play the game.

The SWAC will issue a loss in conference standings to a team that is unable to compete due to covid-19 issues, but the loss will not count toward a team's official win-loss record per NCAA policy.

"If two opponents are unable to compete due to covid-19 issues, both teams shall be deemed to have forfeited and each team will be charged a loss," according to a SWAC news release. "Institutions at their discretion can work with each other and the conference office to reschedule the conference contest."

The SWAC updated the policy amid a number of cancellations during football bowl season as a result of the pandemic.

The University of Arkansas at Pine Bluff will open conference play at home against Alabama A&M on Monday. The women's game will begin at 5:30 p.m., with the men's game to follow.

Covid-19 issues within the University of Central Arkansas women's program caused its Dec. 21 nonconference game against UAPB to be canceled.

UAPB played at Southern Methodist University in Dallas on Tuesday, but lost 86-74. Kaila Walker had 15 points, followed by Tyeisha Juhan with 13, Joyce Kennerson and Sade Hudson with 12 apiece and Zaay Green with 10 points and 10 assists.

UAPB trailed SMU 39-34 at halftime and tied the game at 48-all in the third quarter before the Mustangs pulled away.