Chiefs' Hill has matured into a star 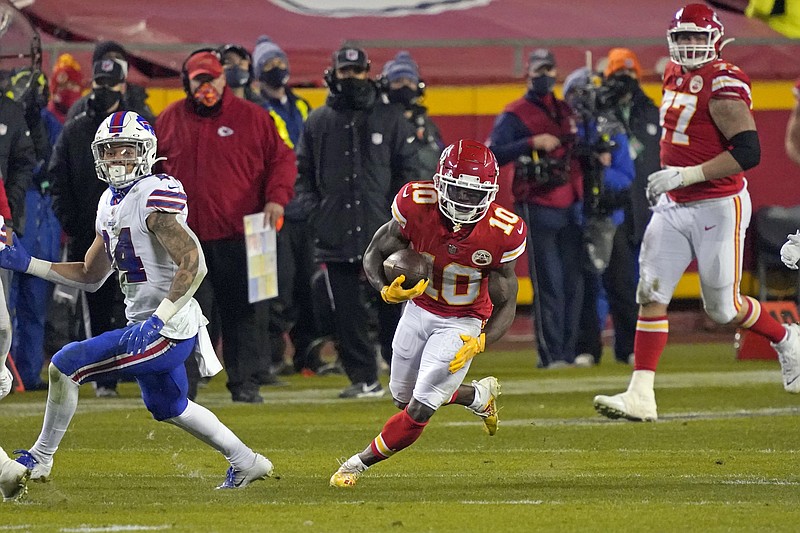 KANSAS CITY, Mo. -- Kansas City Chiefs wide receiver Tyreek Hill will be the first to tell you that he almost threw away his football career.

Twice, as a matter of fact.

The first time came during college, when he was making a name for himself as a standout at Oklahoma State, and a domestic dispute got him kicked off the team. He rehabilitated his image at tiny West Alabama, joined the Chiefs as a fifth-round draft pick, and was beginning to touch stardom when another off-the-field issue led to a long offseason suspension.

That issue was resolved without any legal consequences, though, and Hill returned to sign a contract extension with the Chiefs prior to last season. Then he proceeded to help them to their first Super Bowl championship in five decades.

One of the most dynamic players in the NFL has continued his upward trajectory this season. Hill caught 87 passes for 1,276 yards in the regular season, the third time in four years he's topped 1,000. He also had a career-high 15 TD catches, two more scores on the ground, and led the league with 14 yards per touch from scrimmage.

Now, after two big performances in the postseason, Hill has a chance to help the Chiefs defend their title.

"When it comes down to football, I just love competing," Hill said. "It's you against your man, man on man, and playing the wideout position -- he beats you one play or you beat him. It's just competing for the ball, being that dog."

Hill has spent countless hours with personal trainer Luther Glover at his sports performance facility in suburban Kansas City. He's logged hundreds of extra workouts with quarterback Patrick Mahomes, fine-tuning their timing and his route-running ability. He's pored over film of himself, his opponents, and the best ever to play his position.

"When I do something," Hill said, "I want to be the best at it. That's something that my grandparents taught me throughout my whole life. Don't be average at things. Just the fire in me."

That competitive streak might be why Hill shines when the lights are brightest.

He had nine catches for 105 yards in helping the Chiefs rally past the 49ers in the Super Bowl last season. And after a first-round bye this season, Hill followed with eight catches for 110 yards in the divisional round against Cleveland, then nine for a franchise-record 172 yards in the AFC Championship victory over Buffalo.

"The biggest thing," Mahomes said, "is just taking what's there, getting the ball to him in space."

Because Hill, with his otherworldly speed and elusiveness, can turn the most unremarkable play into something special.

The best example of that came against the Bills. Hill caught a slant over the middle and angled toward the Chiefs sideline, where three defensive players boxed him in. He stuck a foot in the ground, cut back to his left and turned on the jets, streaking in an angle all the way across the field. By the time Hill was finally tackled inside the 5-yard line, he had gone 71 yards for the second-longest catch in KC postseason history.

"He took a different direction. He went sideways," Reid said with a shake of his head. "It was probably double what the crow would fly, but he did what needed to do. The best part of it was that early part where he split those two defenders or three defenders and headed to the left side. There's not a lot of guys that can do that."

That's the kind of eye-opening play Hill has been making since he entered the league, the ones that cause defensive coordinators nightmares and leave opposing players -- and fans -- out of breath.

It was after the play, though, that his growth and maturity the past five years was on display.

"He he came over and apologized for not scoring. He said he's getting slower in his old age," Reid said with a good-natured laugh. "I said, 'Yeah, OK.'

"But he just loves the game. That's what I love about him." 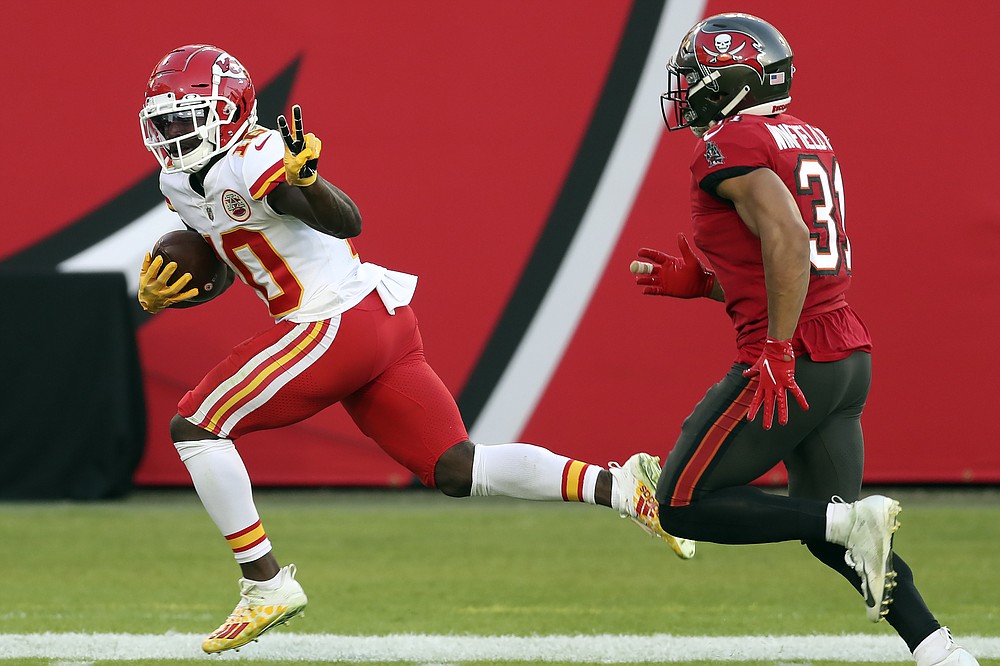 FILE - In this Nov. 29, 2020 file photo, Kansas City Chiefs wide receiver Tyreek Hill (10) reacts as he beats Tampa Bay Buccaneers strong safety Antoine Winfield Jr. (31) on a 75-yard touchdown reception during the first half of an NFL football game in Tampa, Fla. Hill was unstoppable against Tampa Bay in late November. The speedy Kansas City star caught 13 passes for 269 yards and three touchdowns in the Chiefs' 27-24 victory that afternoon. Tampa Bay gets another shot at Hill and the Chiefs in the Super Bowl on Sunday, Feb. 7, 2021. (AP Photo/Mark LoMoglio, File) 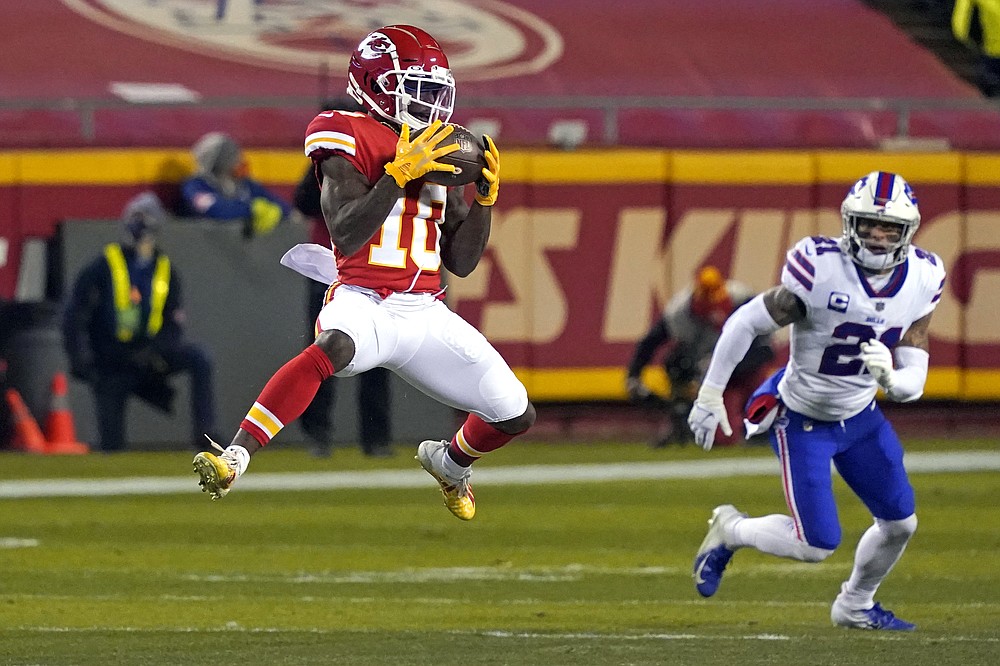 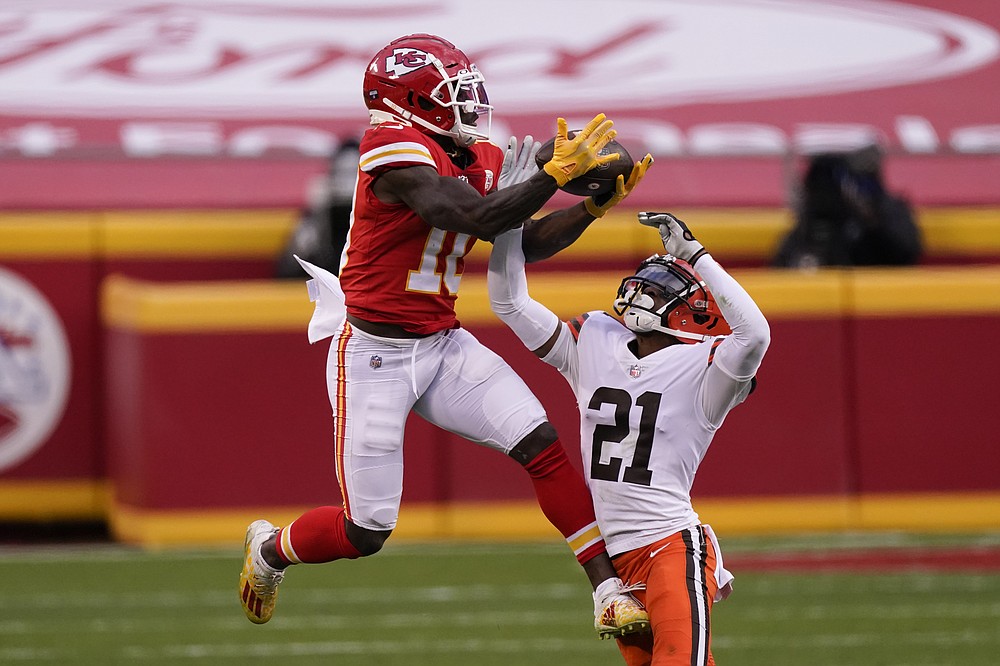