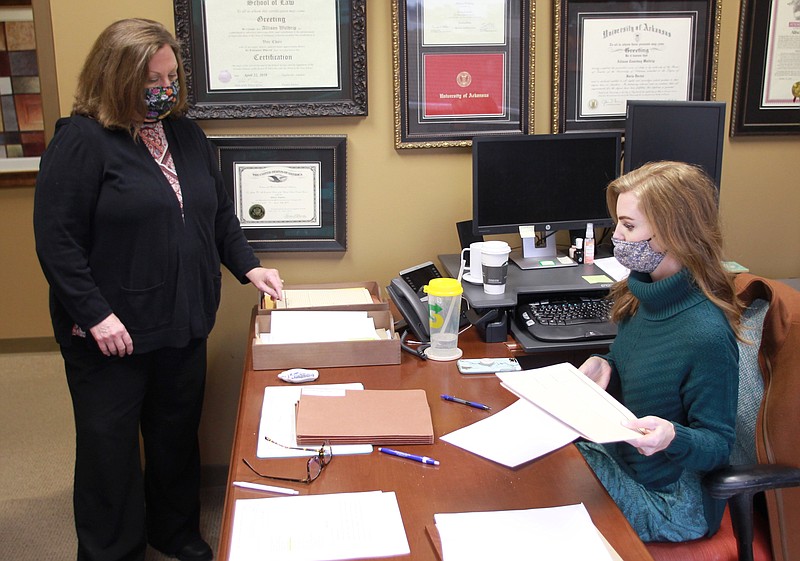 Valerie Andrews, left, a paralegal in the office of the U.S. attorney in Little Rock, talks to Assistant U.S. Attorney Allison Bragg. Acting U.S. Attorney Jonathan Ross said the office has been observing precautions designed to minimize the spread of covid-19, including requirements that everyone in the office wear masks, observe social distancing, minimize face-to-face contact wherever possible, and allowing as many attorneys and staff as possible to work remotely from home. (Arkansas Democrat-Gazette/Dale Ellis)

Last March, as the covid-19 pandemic began to upend life around the globe, federal criminal justice officials in Arkansas had to face the problem of how to navigate the pandemic without creating chaos throughout the system and without trampling the constitutional rights of defendants and petitioners to the court.

Although some court proceedings had to be delayed and rule changes had to be put into place to allow remote proceedings in some hearings, the Richard Sheppard Arnold Federal Courthouse in Little Rock has continued to stay open and to operate.

Between March 13 and Dec. 31, 2020, Chief U.S. District Judge D. Price Marshall Jr. issued 10 administrative orders dealing with court operations during the covid-19 pandemic, directing which court operations would continue and what precautions should be taken to ensure the safety of participants.

Jury trials and grand jury proceedings were suspended in March but resumed in June and continued through October before being suspended again as the result of rising numbers of infections. Currently, jury trials are scheduled to resume March 23, although that could be pushed back once again depending on the pandemic.

Jim McCormack, court clerk for the Eastern District of Arkansas, said for the majority of the court's business to continue uninterrupted required innovation and the ability to adapt.

"We've spent 11 months finding new ways to conduct old business using whatever resources were available that day," he said. "I know that's kind of global but that's the magnitude of the impact of covid on the courthouse. Every interaction with other personnel, we're wearing masks, we're maintaining social distance, every conversation with every visitor, with jurors, with attorneys, involves covid protocols as far as circulation, reporting, have you been infected, do you have a fever, I mean, look at the signs, how do you feel?

"And there's cleaning, protecting the environment, and all of it requires an almost immediate response in an up-to-date consistent manner because the protocols have evolved since March of last year," McCormack continued. "It's been incredibly complicated but we have kept the doors open and we've managed the court's docket."

Many criminal hearings are conducted by video conference with defendants appearing via video either from a holding cell in the U.S. marshal's office located in the courthouse or from one of 14 federal holding facilities located in the region. Inside the courthouse, social distancing and mask requirements are rigidly enforced.

Transporting defendants being held in federal custody requires escorts provided by the U.S. Marshals Service, a practice that carries significant risk of infection, and which requires close adherence to safety practices. Chief Deputy U.S. Marshal Jay Tuck said so far, although there have been some U.S. Marshals Service personnel who have been exposed to the virus, none of those exposures were work-related, which Tuck attributed to a combination of luck and planning.

"It helps that the amount of transports we do have been cut drastically because we have the ability to do video," said Thadd Baird, supervisor for operations with the U.S. Marshals Service office. "I'd say 60 to 75% of our normal transports are being done via video so they remain at the jail."

Baird said in a normal year, the U.S. Marshals Service office has about 3,500 "prisoner productions," which he said are appearances by federal defendants for any court appearance.

"We're doing about the same volume but before we didn't do video so we had to transport all of those," he said.

Tuck said he split his people up into two teams that work different shifts and never interact with one another so that if an infection happens in one team and some have to quarantine, he'll have another team ready to step in. Baird said prisoner transports are arranged to avoid mixing of prisoners from different facilities.

"We just followed a methodical process to get everything working," Baird said, "and it's still working. Everyday we're experiencing new things but it's just adapting to whatever happens, that's how I look at it."

At the U.S. attorney's office, Acting U.S. Attorney Jonathan Ross said the most immediate change affecting his office was the suspension of grand jury and jury trial proceedings in April and May.

"I went to Michael Gordon, our criminal chief, and I told him we need to have a plan to make sure that when grand juries are allowed to happen again that it actually works," Ross said. "Just because the chief judge says we're going to have a grand jury and we send out the notices, that doesn't mean they're going to come."

He said a large part of the process was making sure that those selected for grand jury duty were assured that their health would not be at risk.

"We approached it from the perspective that if we took all of the reasonable care that we'd want someone to take for ourselves or our family members, that we'd have a quorum show up," Ross said. "If people hadn't been confident that we could safeguard their health, they wouldn't have come and it would have paralyzed what we do."

Local defense attorneys Blake Hendrix and Erin Cassinelli agreed that the pandemic has upended much of the traditional judicial model.

"Obviously, the biggest difference right now is the delay in trials," Hendrix said. "On this end, oftentimes, clients aren't that anxious to go to trial but the problem is with clients who are detained. Not being able to schedule trial for those folks has put a burden on them."

Keeping adequate contact with clients has presented challenges, Cassinelli said, often depending on where they are held.

"A lot of our federal clients are detained in local jails that contract with the federal government," Cassinelli said. "Depending on the county they may or may not have that technology and they may not have sufficient staff to manage attorney calls... They tried, I don't want to give the impression they just said forget it, but they hadn't planned for [a pandemic]."

Over time, she said, the situation has improved at most locations. Greene County, she said, has a conferencing system that enables attorneys to log in and automatically be connected with a client. At some jails, such as Pulaski County, Cassinelli said a point person is in charge of keeping track of court dates and attorney visits.

"Unfortunately, in our universe there's emergencies sometimes," she said. "Something would happen and I've got to get the judge an answer and I've got to get in touch with my client on fairly short notice and that obviously is made a lot harder with covid."

Cassinelli said a few jails balked at making changes initially but she said most eventually got on board after receiving stern warnings from the court.

"That was troublesome for a while," she said. "You can't just lock people up and not give them access to anybody."

Hendrix pointed out that prohibitions on sending copies of discovery documents has created a barrier to serving the interests of clients.

"To get discovery in federal cases we have to sign an agreed protective order that says you can't make copies of paper discovery or copies of digital material and send it to your client," he said. "You can share it with them but you can't send it to them which obviously puts us in a huge bind dealing with clients remotely. How can I share discovery with a client in a zoom conference and the client can't have the paperwork with them?"

Not all of the changes have been negative, Hendrix said, and one big advantage of Zoom conferencing has been the ability to spend more time with clients housed far from Little Rock.

"When it works out technologically and logistically I've found myself in more contact with detained clients during covid than I did before," he said. "Now, I don't have to pack everything up and take a full day off to meet with a client. It's like hey, let's meet for an hour today and set another one up for next week, too." 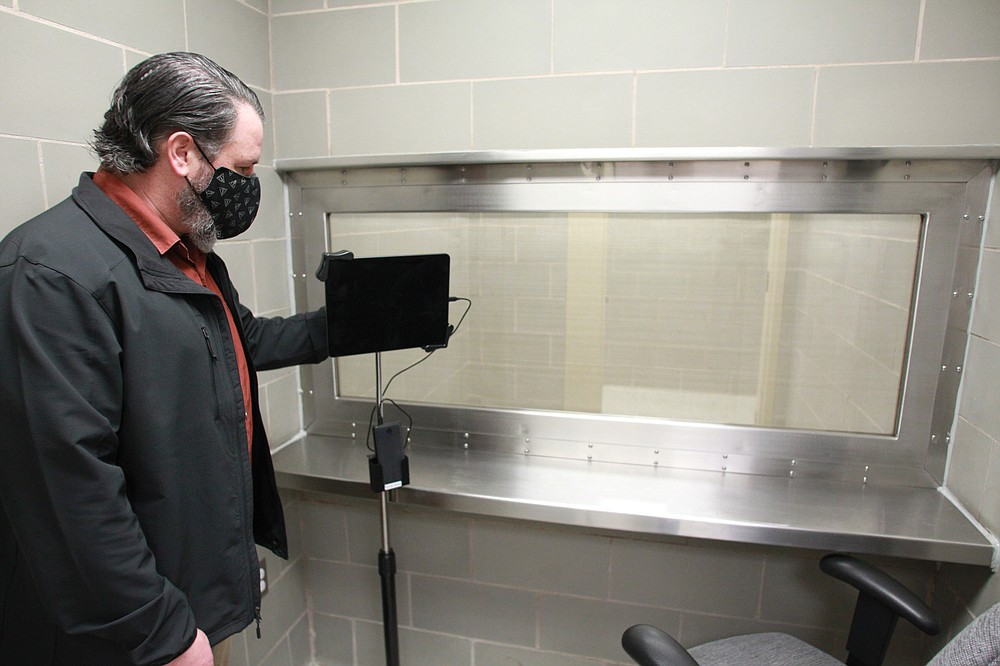 Chief Deputy U.S. Marshal Jay Tuck, currently the acting U.S. marshal for the Eastern District of Arkansas, stands in a holding area where federal prisoners transported to the federal courthouse in Little Rock can meet with their attorneys and a tablet makes it possible for them to appear in court via a video conference link. The tablet is supplied by the court clerk's office which also provides technical assistance. (Arkansas Democrat-Gazette/Dale Ellis)