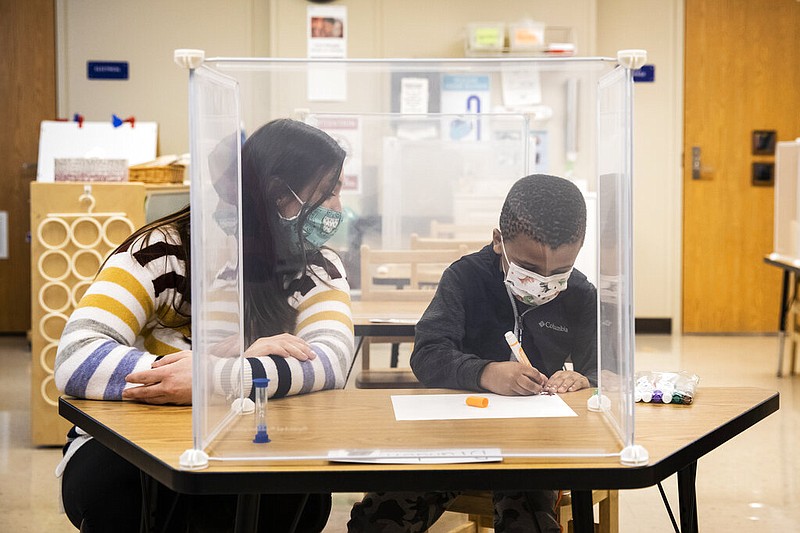 Pre-kindergarten teacher Sarah McCarthy works with a student at Dawes Elementary in Chicago on Monday, Jan. 11, 2021.

President Joe Biden's push to reopen most schools serving kindergarten through eighth grade by late April is likely to leave out millions of students, many of them members of minority groups in urban areas, according to education officials.

"We're going to see kids fall further and further behind, particularly low-income students of color," said Shavar Jeffries, president of Democrats for Education Reform. "There's potentially a generational level of harm that students have suffered from being out of school for so long."

Like some other officials and education advocates, Jeffries said powerful teachers unions are standing in the way of bringing back students. The unions insist they are acting to protect teachers and students and their families.

Plans to reopen Chicago schools remained in limbo as last-minute negotiations over covid-19 safety measures with the teachers union stretched into Sunday, amplifying the possibility of a strike.

In a call Thursday evening with teachers unions, Dr. Anthony Fauci, the federal government's top infectious-disease expert, said the reopening of K-8 classrooms nationally might not be possible on Biden's time frame. He cited concern over new variants of the virus that allow it to spread more quickly and may be more resistant to vaccines.

Biden is asking for $130 billion for schools to address concerns by unions and school officials as part of a broader coronavirus relief package that faces an uncertain fate in Congress. If his reopening goal is realized, millions of students might still have to keep learning from home, possibly for the rest of the school year.

California was an epicenter of infection in the first part of January, and public health officials say many of the state's districts are in areas where transmission remains too high to reopen. But a statewide group called Open Schools California is pushing for reopening as soon as public health standards are met.

"I think that data will bear out that the children who have been most disadvantaged are going to be low-income children, Black and brown children, children with special education, learning differences, homeless and foster youth," said Megan Bacigalupi, a mother of students in the Oakland public schools and one of the organizers.

By early January, about a third of students in a sample of 1,200 U.S. school districts were in schools where classes had been held exclusively online since last March -- many of them in cities. By last week, more than half of students were enrolled in schools where in-person learning was at least an option, according to Burbio, a data service tracking school-opening policies.

For the first time since shuttering schools in March, Atlanta began returning the youngest and special education students to some in-person learning last week. Other districts planning to reopen by early March include Clark County, Nev., which includes Las Vegas; Kansas City, Mo.; Boston and the big Ohio school systems.

Jeffries acknowledges that there are reasons it's harder to open schools in cities: They're more densely populated, meaning the virus can spread faster; more people rely on public transportation, a potential hot spot for contamination; and more parents have front-line jobs that could expose them, and, in turn, their children, to the virus.

But he said the major obstacle to reopening city schools is political. "The teachers unions tend to be pretty obstinately opposed to going back to school," Jeffries said.

In Chicago, only pre-kindergartners have been in school so far. Last week, the Chicago Teachers Union voted to teach online only in a showdown with the district over plans to bring students to school starting today. The union has authorized a strike if school officials retaliate, but negotiations are continuing.

Roughly 62,000 students and about 10,000 teachers and staff in K-8 were expected to start school today as part of the district's gradual reopening, plans Mayor Lori Lightfoot insists will take place. The Chicago Teachers Union has fought returning to classrooms in the nation's third-largest district, defying orders to come to class ahead of students. The union has said that if the district locks teachers out of email and teaching platforms, which it has done previously, teachers will picket.

Chicago Public Schools officials and the union reported weekend progress, with talks continuing into Sunday. Both sides have been fighting for months over issues including vaccinations, metrics used to gauge infections and special accommodations for employees who have concerns, such as a high-risk family member in their household.

Union leaders did not come to the negotiating table Sunday, Lightfoot said during a news conference later in the evening, adding that she still believed a deal could get done within hours if they did: "[Chicago Teachers Union], please come back to the table -- today."

Asked about reports it was the city, not the union, that refused to come to the negotiating table Sunday, Lightfoot responded, "That's nonsense. ... We are here, night and day, to get a deal done."

Lightfoot said she was going to "have to take action" against teachers who didn't return to work. She declined to specify what that could entail.

The district's CEO, Janice Jackson, took to national television Sunday to insist it was safe to reopen Chicago schools with proper protocols. The district, which requires masks for students and teachers, has purchased thousands of classroom air filters, deep-cleaned schools and rolled out a voluntary testing program.

"We believe that we have to reopen schools. We've been closed for almost a year now. And as a school system, we're starting to see some of the effects of schools being closed," Jackson told CBS' "Face the Nation."

District officials said Black and Hispanic students, who make up the vast majority of the roughly 355,000-student district, have been especially hard hit since going fully remote last March. Pre-K and some special education students returned Jan. 11, but went back to online classes amid the escalating fight with the union. District officials haven't said when high school students will return.

Claiborne Wade, 31, has three children in the Chicago Public Schools system, ages 10, 9 and 7. Wade believes the district is not quite ready to reopen schools, and he favors distance learning for now.

Even so, he said minority students in large urban districts have fewer resources for online learning. He's seen students from more affluent schools get a laptop and a tablet, and even a desk, while his kids only have a laptop to work with. Having both a laptop and tablet helps because the students can see their teacher on one screen and follow along with instruction materials on another, he said.

"It's been going on for years, even before the pandemic hit," he said. "We've always been at the bottom of the totem pole, in receiving resources that we need."

Public health officials increasingly say that virus transmissions in schools are low, so long as measures such as mask-wearing and social distancing are in place -- even if teachers and other school staff have not received vaccinations.

On Jan. 21, Maryland Gov. Larry Hogan, a Republican, declared: "There is no public health reason for school boards to be keeping students out of school. None."

This past week, Maryland State Education Association President Cheryl Bost wrote to Hogan, saying his statement "would be laughable if it were not so dangerous." She said the coronavirus is not predictable and that dangers are heightened with the spread of new mutations. Infection risks increase when people gather indoors for long periods.

Randi Weingarten, president of the American Federation of Teachers, said it could be safe to return to schools in the spring semester with rigorous testing programs in place and the option for students and educators to remain online if they choose to.

"Teachers know how important in-person instruction is, but we have to make it safe. Testing and vaccination, as well as masking and distancing, are crucial, as are accommodations for educators at risk," she said in a statement last week.

Keith Benson, president of the Camden Education Association, which represents teachers in a New Jersey city with a long history of poverty, crime and high dropout rates, said conditions are different in the city than outside it. The schools there plan to keep buildings closed until at least April.

"What keeps someone safe in a suburban area is not the same thing that would keep folks safe here," Benson said, adding that while remote learning is not ideal, he believes students will be able to catch up eventually.

Information for this article was contributed by Sophia Tareen, Collin Binkley, Jennifer Peltz, Brian Witte and Larry Fenn of The Associated Press. 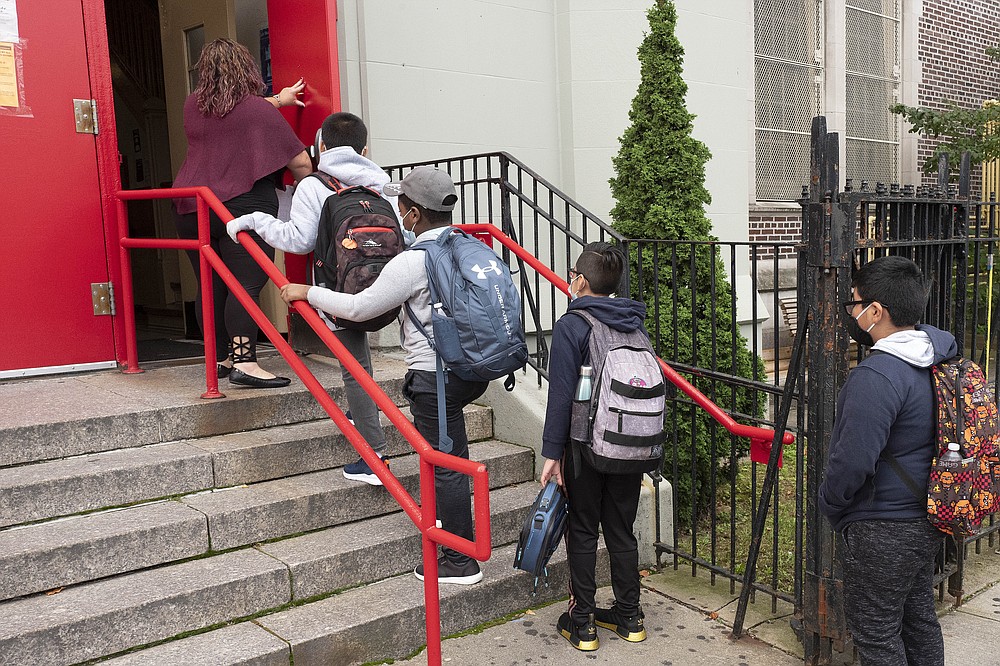 FILE - In this Sept. 29, 2020, file photo, a teacher leads her students into an elementary school in the Brooklyn borough of New York as hundreds of thousands of elementary school students are heading back to classrooms in the city, resuming in-person learning during the coronavirus pandemic. President Joe Biden says he wants most schools serving kindergarten through eighth grade to reopen by late April 2021. But even if that happens, many schools in urban areas that serve high concentrations of minority students are likely to stay closed. (AP Photo/Mark Lennihan, File) 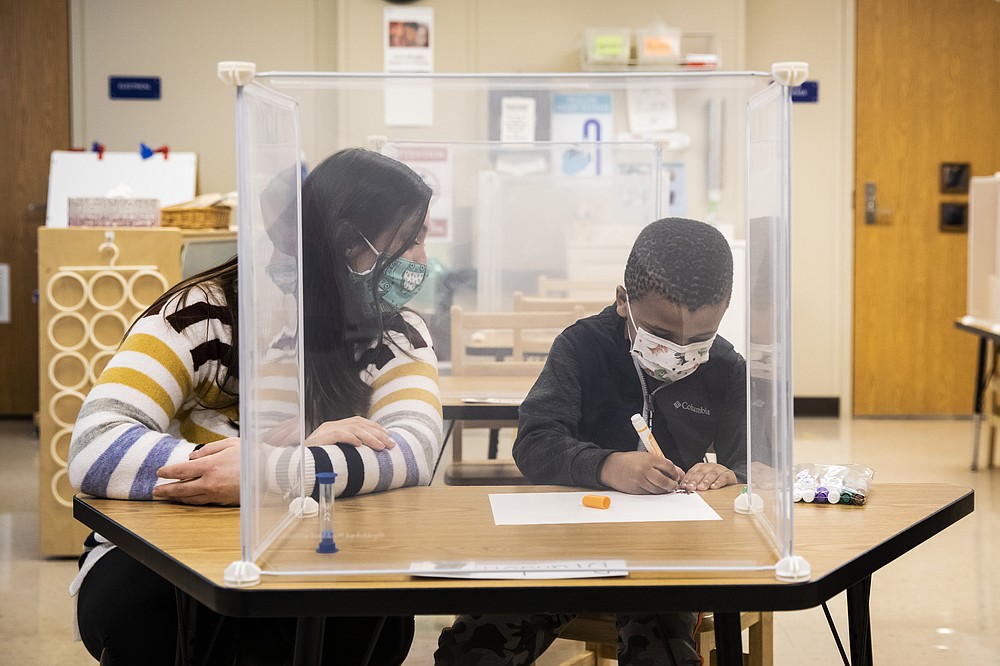 FILE - In this Jan. 11, 2021 file photo, pre-kindergarten teacher Sarah McCarthy works with a student at Dawes Elementary in Chicago. President Joe Biden says he wants most schools serving kindergarten through eighth grade to reopen by late April 2021. But even if that happens, many schools in urban areas that serve high concentrations of minority students are likely to stay closed. (Ashlee Rezin Garcia/Chicago Sun-Times via AP, Pool, File) 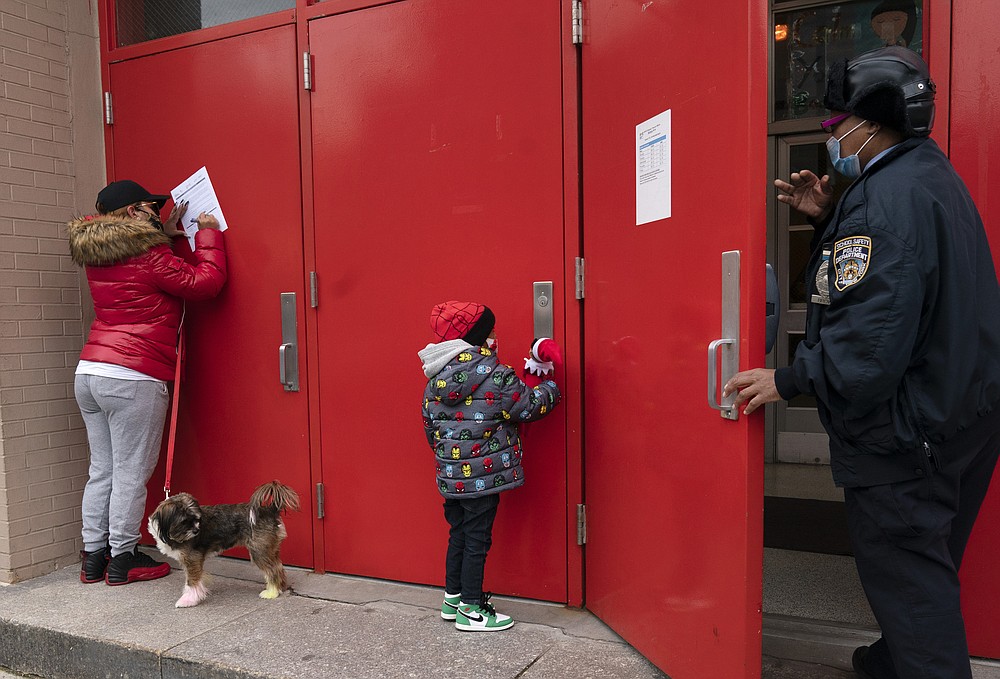 FILE - In this Dec. 7, 2020, file photo, Sheila Melendez, left, completes a form granting permission for random COVID-19 testing for students as she arrives with her daughter Jayceon, center, at P.S. 134 Henrietta Szold Elementary School in New York. President Joe Biden says he wants most schools serving kindergarten through eighth grade to reopen by late April 2021. But even if that happens, many schools in urban areas that serve high concentrations of minority students are likely to stay closed. (AP Photo/Mark Lennihan, File) 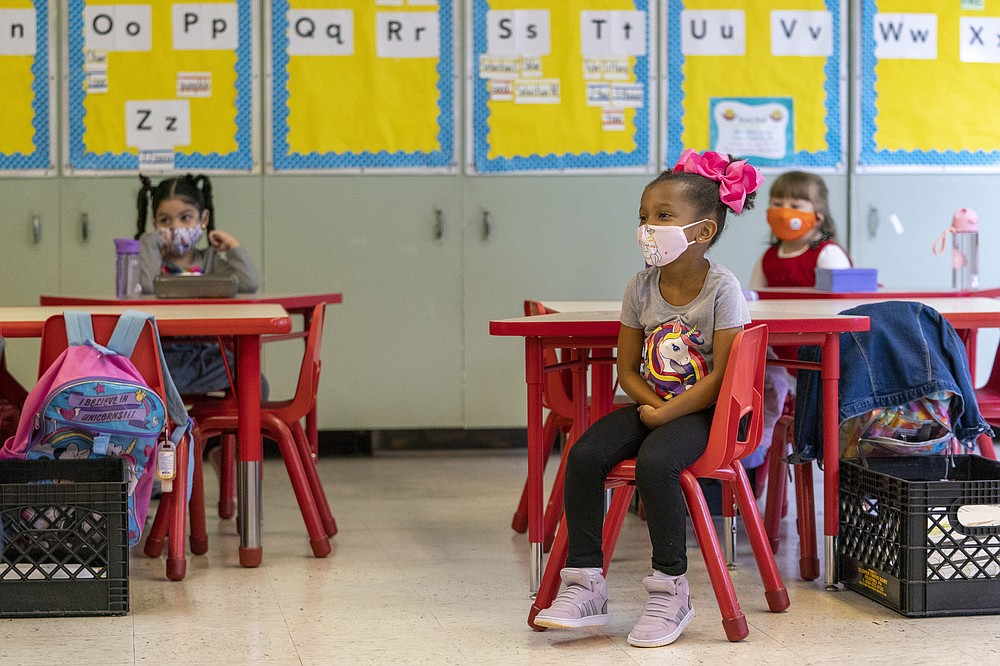 FILE - In this Oct. 20, 2020, file photo, students sit in a distanced pattern from their classmates during the coronavirus outbreak in a Kindergarten class at School 16, in Yonkers, N.Y. President Joe Biden says he wants most schools serving kindergarten through eighth grade to reopen by late April 2021. But even if that happens, many schools in urban areas that serve high concentrations of minority students are likely to stay closed. (AP Photo/Mary Altaffer, File) 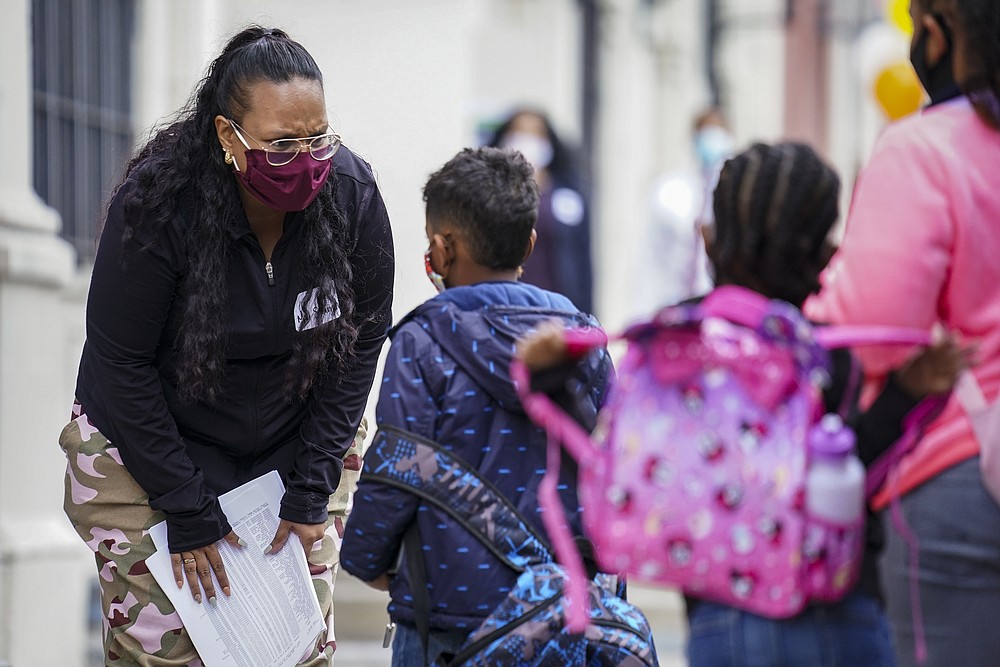 FILE - In this Sept. 29, 2020, file photo, school staff greet students as they arrive for In-person classes outside Public School 188 The Island School in the Manhattan borough of New York. President Joe Biden says he wants most schools serving kindergarten through eighth grade to reopen by late April 2021. But even if that happens, many schools in urban areas that serve high concentrations of minority students are likely to stay closed. (AP Photo/John Minchillo, File)
ADVERTISEMENT