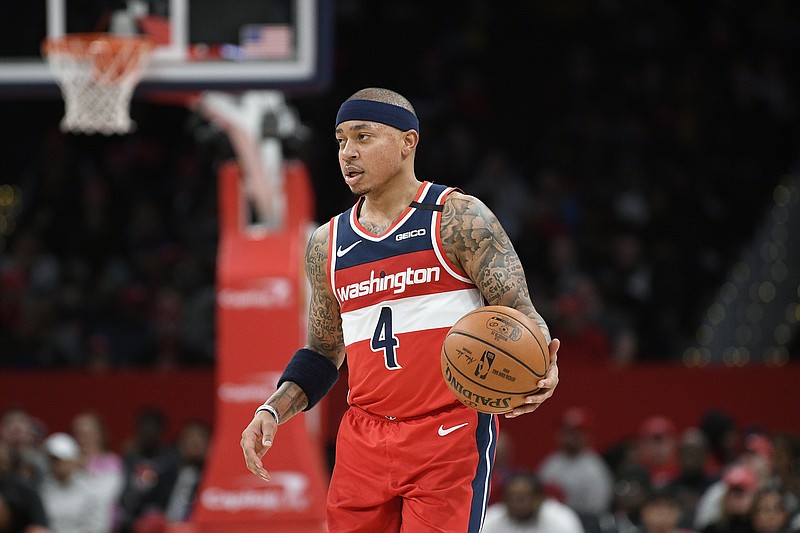 FILE - Washington Wizards guard Isaiah Thomas (4) dribbles the ball during the first half of an NBA basketball game against the Brooklyn Nets in Washington, in this Saturday, Feb. 1, 2020, file photo. USA Basketball has finalized the 14-player roster for the final round of AmeriCup qualifying later this month, a group led by NBA All-Stars Joe Johnson and Isaiah Thomas. (AP Photo/Nick Wass, File)

USA Basketball has finalized the 14-player roster for the final round of AmeriCup qualifying later this month, a group led by former NBA All-Stars Joe Johnson and Isaiah Thomas. Both Johnson (Little Rock Central, Arkansas Razorbacks) and Thomas have past USA Basketball experience. Johnson was a member of the U.S. team that won the bronze medal at the 2006 World Cup. Thomas was a member of the 2018 USA Basketball Men's National Team. The roster includes five other players with NBA regular-season experience: Josh Boone, Treveon Graham, James Nunnally, Dakota Mathias and Jordan Sibert. Also on the team that will compete in San Juan, Puerto Rico, are Paul Atkinson, Cat Barber, Chris Daniels, Will Davis II, KJ Feagi, Ra'Shad James and Tre'Shawn Thurman. Former Milwaukee Bucks coach and longtime NBA assistant Joe Prunty will coach the squad, with Othella Harrington and Yale Coach James Jones on his staff. The U.S. is 4-0 in AmeriCup qualifying and has already qualified for the tournament, which will take place in September 2022 and serves as the championship for the teams in the FIBA Americas zone. The U.S. and Brazil are the only teams to have clinched AmeriCup berths so far.

The SEC has postponed Vanderbilt's men's basketball game at Texas A&M for tonight, the second game between the teams postponed this season. The SEC said this postponement is because of a combination of positive tests, contact tracing and quarantining of people inside Texas A&M's program. No make-up date has been scheduled. The first game in Nashville, Tenn., between the teams Jan. 20 was postponed due to covid-19 testing, tracing and quarantining with Vanderbilt.

Mickey Callaway has been suspended by the Los Angeles Angels after allegations of inappropriate behavior toward several women who work in sports media. The Angels announced their decision Tuesday, a day after the allegations against the former New York Mets manager appeared in a report by The Athletic. The team "will work closely with MLB to conduct a full investigation," Angels spokesperson Marie Garvey said. Callaway joined the Angels in October 2019, three weeks after he was fired by the Mets after two years in charge. Before that, the former major-league pitcher spent five seasons as the Cleveland Indians' pitching coach. The five women who spoke to The Athletic on condition of anonymity gave detailed accounts of multiple instances of aggressive, inappropriate acts by Callaway over five years while he was employed by three teams. Callaway sent uninvited and sometimes unanswered messages to the women via email, text or social media, and asked one to send nude photos in return, according to the report. He often commented on their appearance in a way that made them uncomfortable and on one occasion "thrust his crotch near the face of a reporter" while she interviewed him.

Video game maker EA Sports announced Tuesday that it is bringing back its college football series, which was shelved eight years ago after the NCAA was sued for not sharing revenue from the game with college athletes. Though there is still much to be sorted out when it comes to whether and how college players will be permitted to profit from the use of their names, images and likenesses in the game, Electronic Arts has already taken steps to relaunch the popular franchise. There is no timetable in place for the next release of a college football game, the company said. But EA announced it has reached an agreement with College Licensing Company, which allows the game maker to use school marques and logos. The game was a big hit among players from 2005-13, but it was discontinued as part of the fallout from a federal antitrust lawsuit brought against the NCAA by former UCLA basketball player Ed O'Bannon. The NCAA Football video game did not identify players by name, but the game simulated teams and players as they played in real life. The video game was part of a broad legal challenge and a judge ruled the NCAA had been inappropriately using the names, images and likenesses of college athletes. The NCAA, through its licensing partner, pulled out of the game during the trial.

Hendrick Motorsports signed its first two sponsors for Kyle Larson, a promising sign as the driver attempts to rebuild his image after his use of a racial slur derailed his promising career. Cincinnati Inc., a machine tool maker, and heavy-duty truck manufacturer Freightliner will be the primary sponsors of Larson's new No. 5 Chevrolet for two races each in 2021. Both companies, existing Hendrick partners, will also be full-time associate sponsors for Larson. Rick Hendrick signed Larson late last year to give Larson a second chance. The driver was expected to be NASCAR's top 2020 free agent but lost his job and all his sponsors after Larson used a racial slur while racing online in April. Larson was suspended the remainder of the NASCAR season but used the time educating himself on racial justice, volunteering with various causes and rebuilding his career. Hendrick is willing to fund Larson himself but believes companies will realign with the driver once he's shown he grew from his error. "NASCAR has tremendous momentum going into 2021, and Kyle and the No. 5 crew will certainly be one of the most exciting teams to watch this year," the team owner said.

Roger Federer is aiming to play his first tournament after two knee surgeries and more than one year out in Qatar next month. Federer told Swiss radio station SRF on Tuesday he has targeted the Doha Open from March 8-13. The 20-time Grand Slam champion said he preferred a smaller tournament where he "wouldn't be in the spotlight too much and the stress is also a little less." Federer, 39, last played in January 2020 at the Australian Open, losing in the semifinals to Novak Djokovic while clearly struggling with injury.