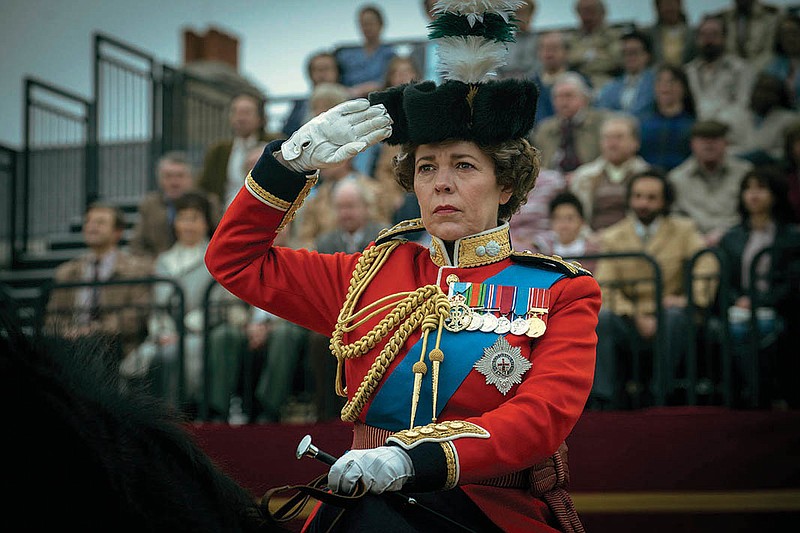 NEW YORK -- After a year where the pandemic nearly emptied movie theaters, Netflix dominated nominations to the 78th Golden Globe Awards on Wednesday, with David Fincher's "Mank" leading film nominees with six nods and "The Crown" topping all television series.

The Globes, delayed about two months because of the coronavirus, tried to muster some of the awards' usual buzz Wednesday in a largely virtual awards season bereft of the kind of red-carpet glamour the Globes annually feast on. And perhaps to account for the otherwise lack of it, the Hollywood Foreign Press Association heaped nominations on two lavish period pieces rich in royalty -- both the Hollywood variety (the black-and-white "Mank" dramatizes the making of "Citizen Kane") and the British kind.

"Sometimes you just have to think, what does it mean in the whole big scheme of things with this worldwide, global thing going on," Oldman said from London. "But you know, we want to kind of get back to some kind of normalcy. Life goes on."

Netflix, which topped all studios at the Globes last year, too, led with a commanding 42 nominations, with 22 coming in film categories and 20 in television. No other studio was close.

The day belonged to the streaming services. Disney+ ("The Mandalorian") and HBO Max ("The Flight Attendant") both notched their first Golden Globe nominations. Amazon, with Regina King's "One Night in Miami," about a meeting of four Black icons in 1964, and Steve McQueen's film anthology "Small Axe," landed 10 total nominations -- a total matched by the Disney-owned Hulu, including nods for the Catherine the Great series "The Great," with Elle Fanning, and the Andy Samberg time-warp comedy "Palm Springs." Apple TV+, too, scored several nods including the Jason Sudeikis series "Ted Lasso," the Irish animated film "Wolfwalkers" and Bill Murray's performance in Sophia Coppola's father-daughter comedy "On the Rocks."

Aaron Sorkin's "The Trial of the Chicago 7" -- also a Netflix release, about the countercultural clash and subsequent trial after the 1968 Democratic National Convention -- came in second among movies with five nominations, including nods for best film, drama; best director and best screenplay for Sorkin; supporting actor for Sacha Baron Cohen; and best song.

By splitting up films between drama and comedy or musical, the Globes gave a boost to an awards season wild card, "Borat Subsequent Moviefilm." Baron Cohen's "Borat" sequel -- one of the few nominees partially shot during the pandemic -- was nominated for best picture, comedy or musical, best actor in a comedy for Baron Cohen and best supporting actress for Maria Bakalova.

Also nominated for best picture in the comedy or musical category were: "Palm Springs," "The Prom," "Music" and "Hamilton." The film version of Lin-Manuel Miranda's Broadway musical isn't eligible for the Academy Awards but was for the Globes, which also nominated Miranda's performance.

Information for this article was contributed by Lindsey Bahr, Andrew Dalton and Brooke Lefferts of The Associated Press. 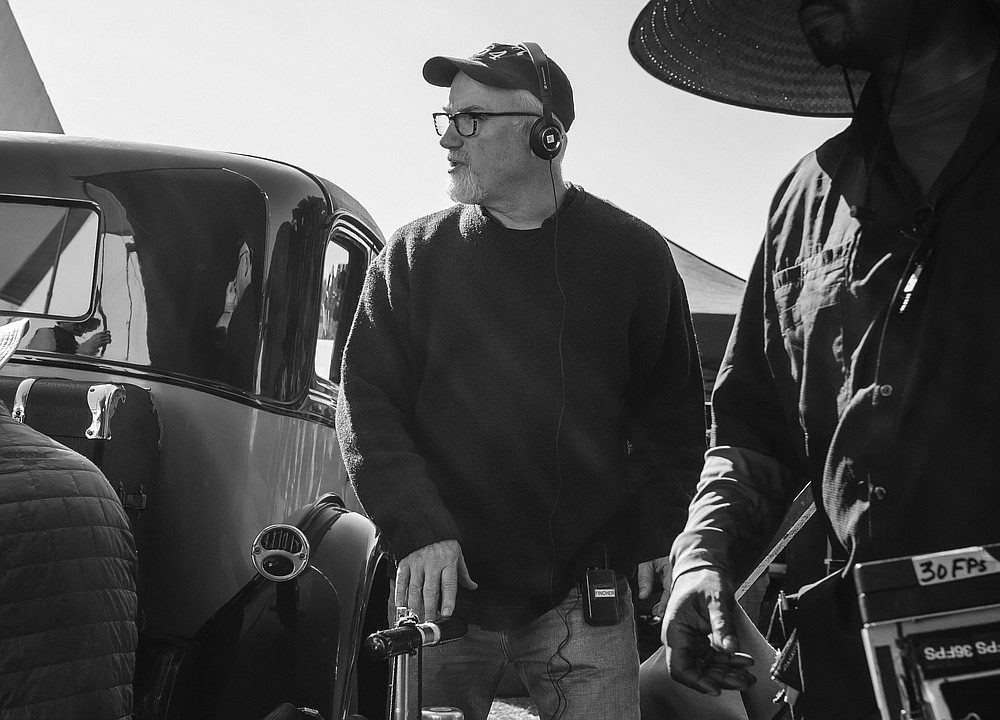 This image released by Netflix shows David Fincher on the set of "Mank." Fincher was nominated for a Golden Globe for best director on Wednesday, Feb. 3, 2021 for his work on the film. (Gisele Schmidt/Netflix via AP) 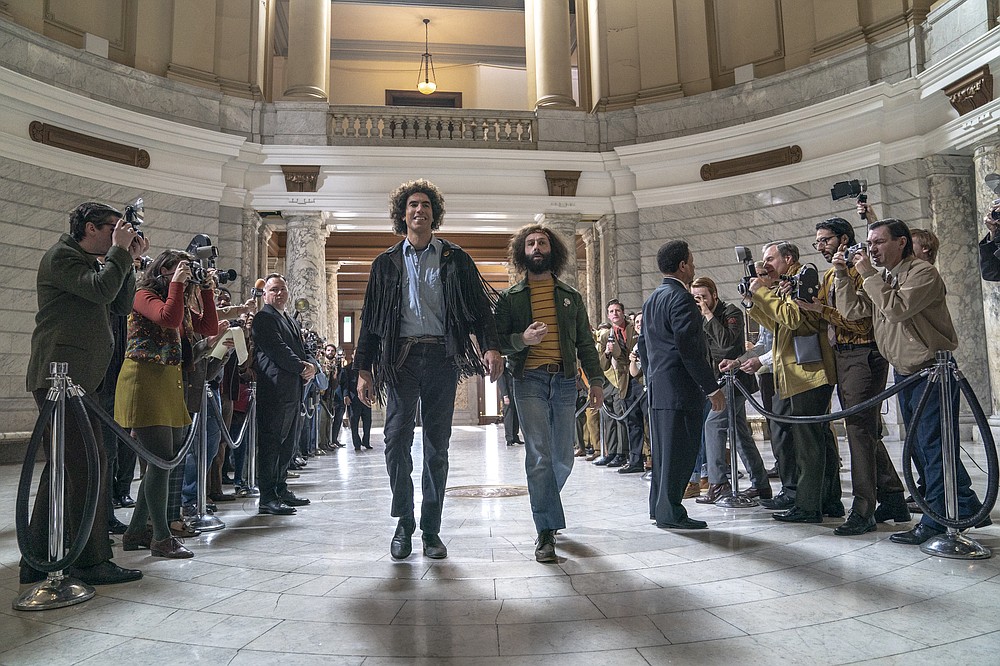 This image released by Netflix shows Sacha Baron Cohen, center left, and Jeremy Strong in a scene from "The Trial of the Chicago 7." (Niko Tavernise/Netflix via AP) 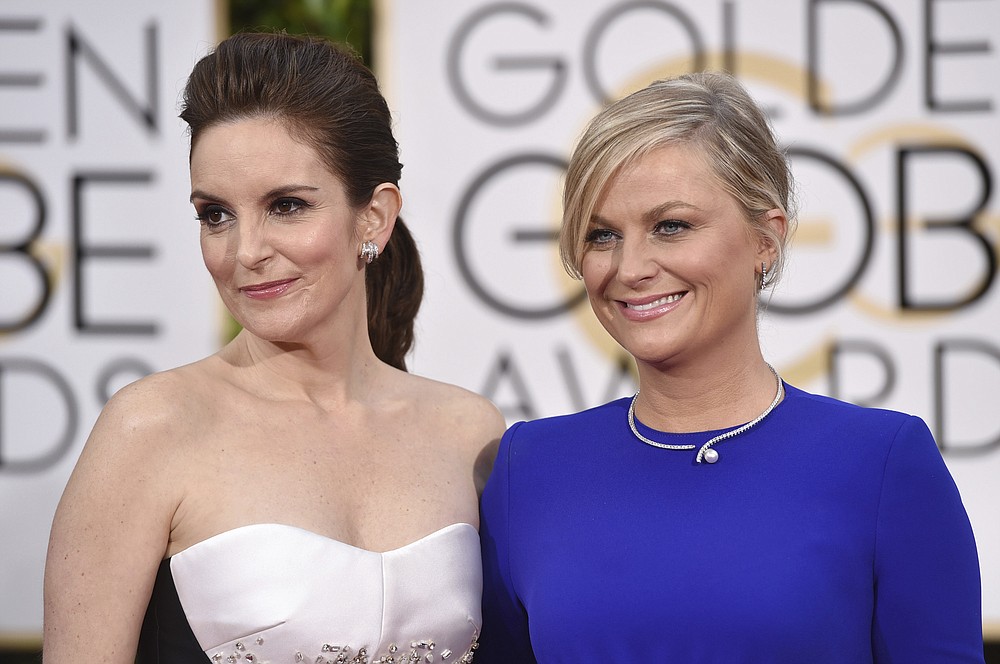 FILE - In this Jan. 11, 2015, file photo, Tina Fey, left, and Amy Poehler arrive at the 72nd annual Golden Globe Awards in Beverly Hills, Calif. The 78th Golden Globes will for the first time be held on two coasts, with Tina Fey live in New York and Amy Poehler in Beverly Hills, Calif., a person close to the show said Tuesday, Feb. 2, 2021, as the annual Hollywood ceremony adapts to the pandemic. (Photo by John Shearer/Invision/AP, File) 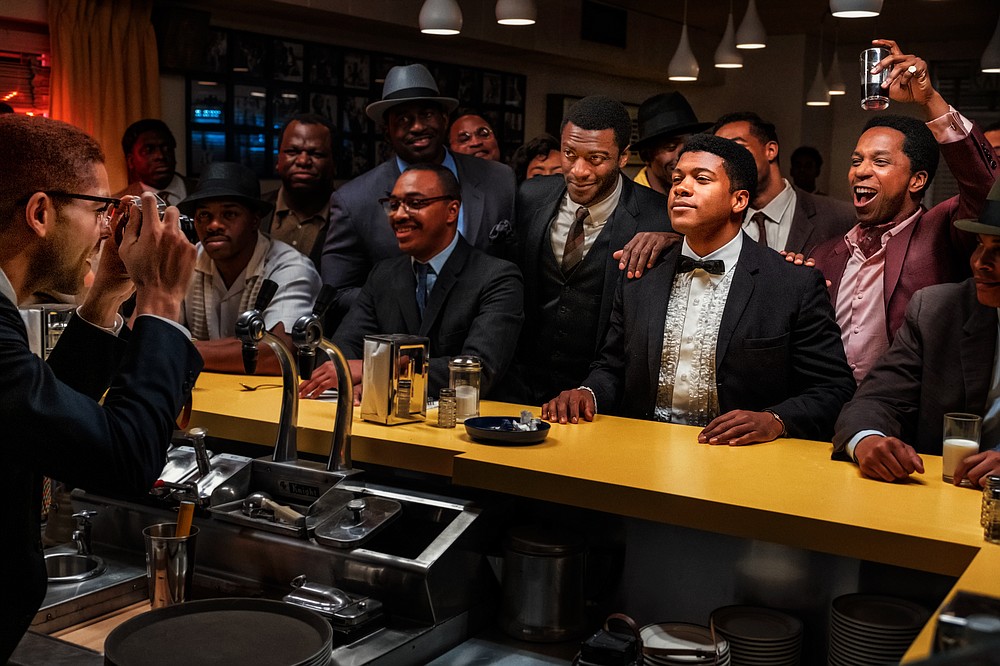 This image released by Amazon Studios shows, from right, Leslie Odom Jr., Eli Goree and Aldis Hodge in a scene from "One Night in Miami." (Patti Perret/Amazon Studios via AP) 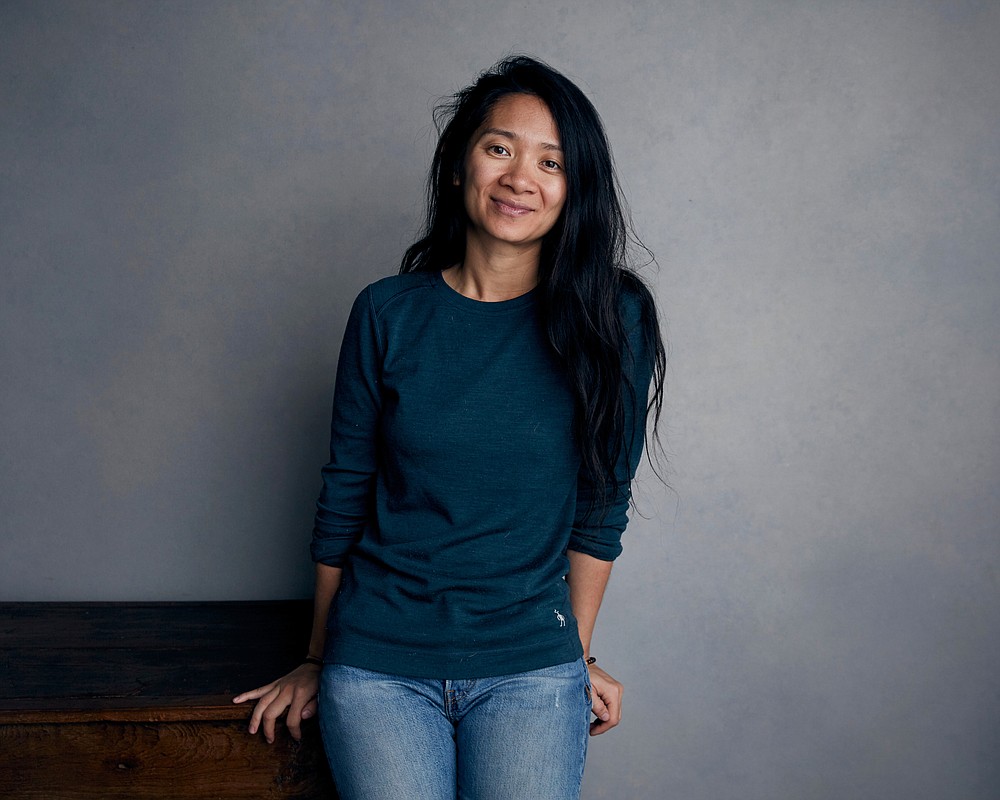 FILE - Chloe Zhao poses for a portrait during the Sundance Film Festival in Park City, Utah on Jan. 22, 2018. Zhao was nominated for a Golden Globe for best director on Wednesday, Feb. 3, 2021 for her work on "Nomadland." (Photo by Taylor Jewell/Invision/AP, File) 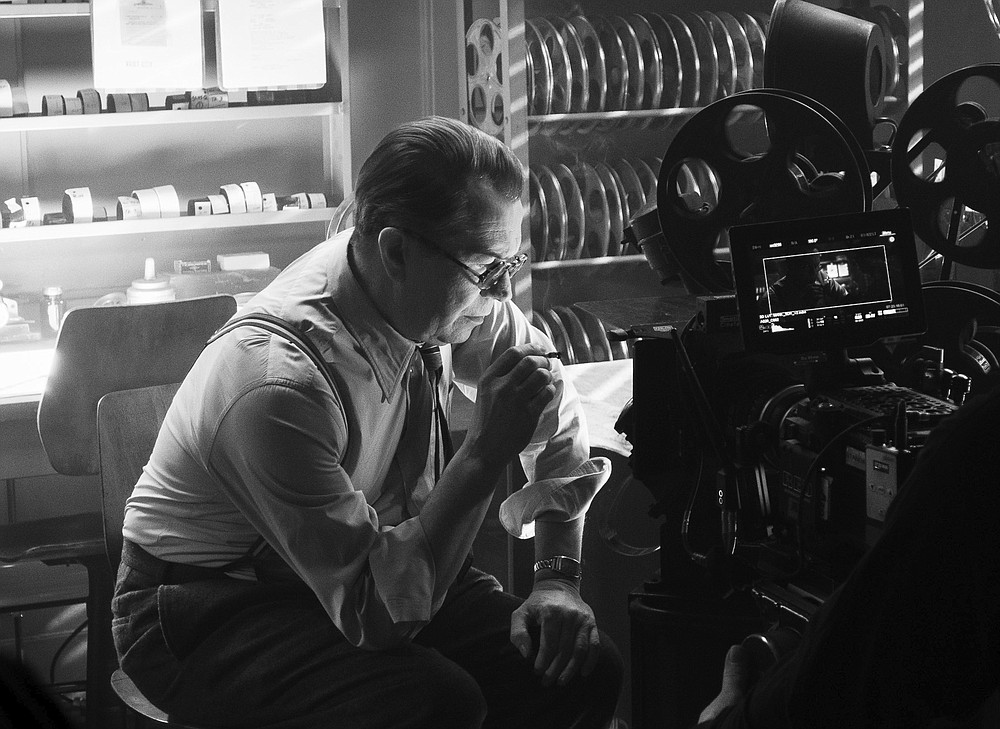 In this image released by Netflix, Gary Oldman portrays Herman Mankiewicz in a scene from "Mank." On Wednesday, Feb. 3, 2021 the film was nominated for a Golden Globe for best motion picture drama. (Nikolai Loveikis/Netflix via AP)

In this image released by Netflix, Amanda Seyfried appears in a scene from "Mank." Seyfried was nominated for a Golden Globe for best supporting actress in a motion picture on Wednesday, Feb. 3, 2021 for her role in the film. (Nikolai Loveikis/Netflix via AP) 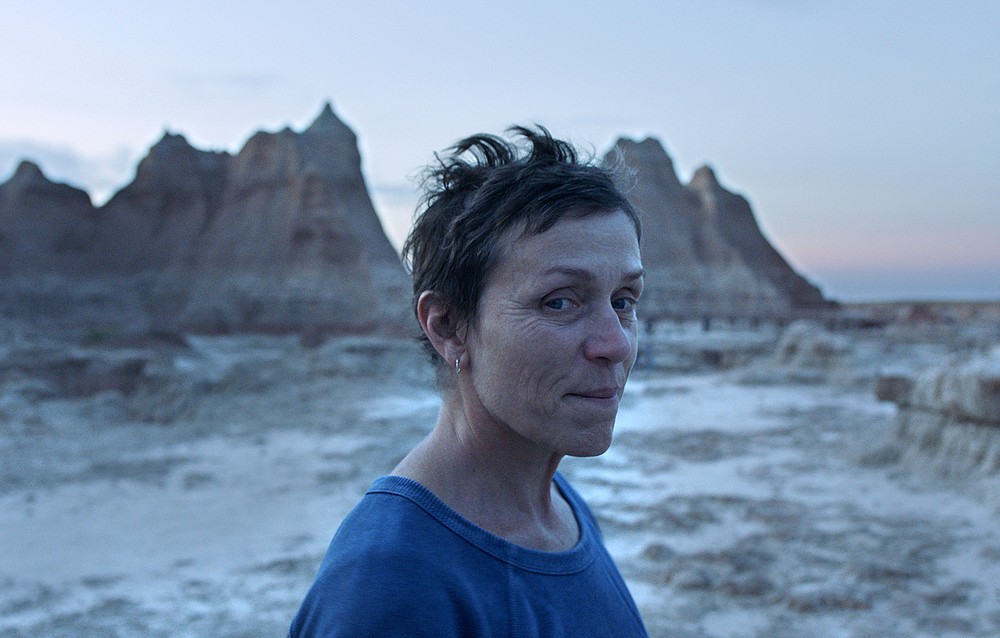 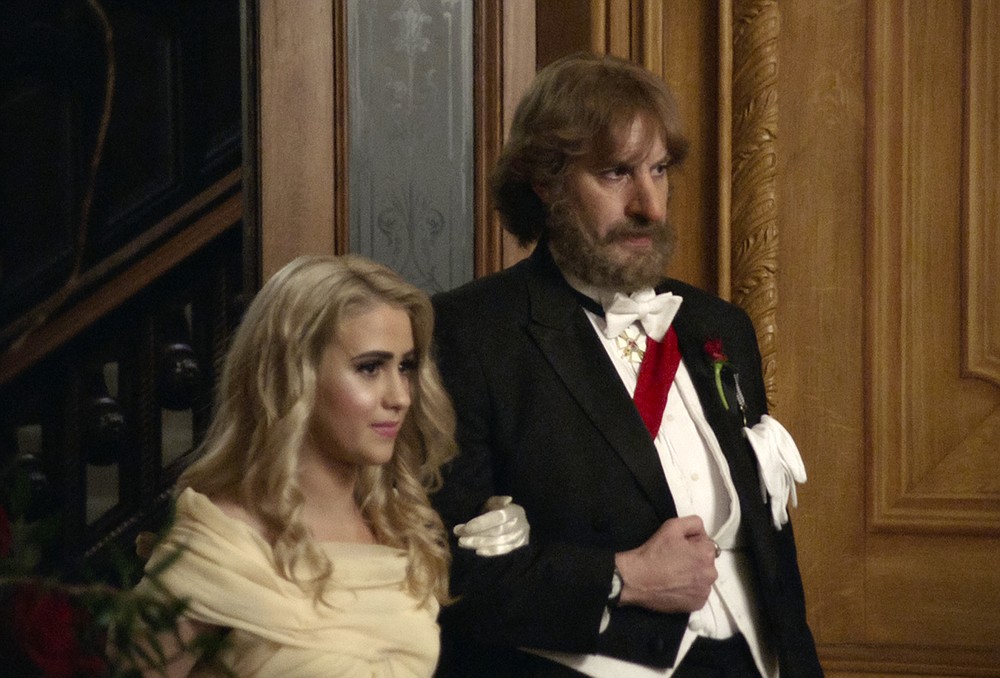 This image released by Amazon Studios shows Maria Bakalova, left, and Sacha Baron Cohen in a scene from "Borat Subsequent Moviefilm." The film was nominated for a Golden Globe for best musical/comedy.(Amazon Studios via AP)
ADVERTISEMENT