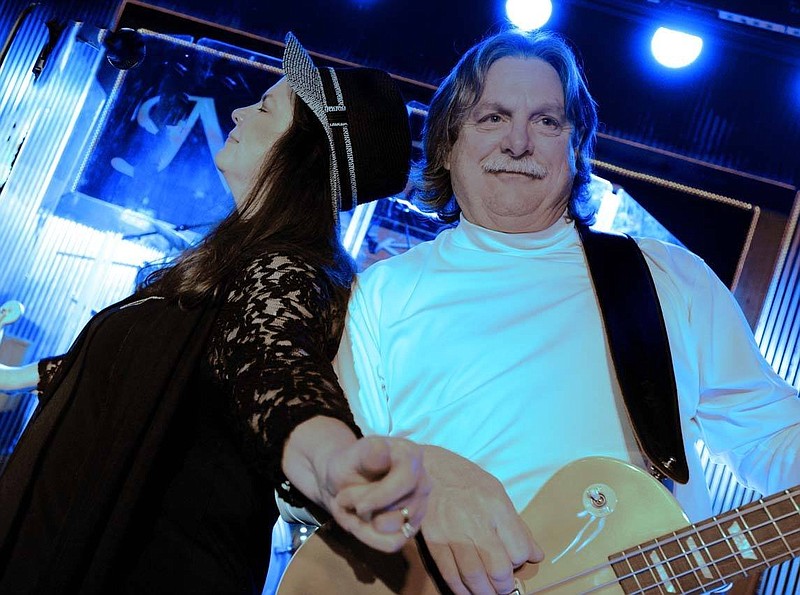 The Harrisong Duo will perform from 3 to 5 p.m. Saturday at the River Bottom Winery at BoBrook Farms, 13810 Combee Lane, Roland. Admission is free.

Harrisong is singer Karen Harris and her husband, Wightman Harris, on guitar and vocals.

"Karen's roots were with singing in a contemporary church ensemble for some 15 years," Wightman Harris says. "When that played out, she was introduced into performance of folk/rock acoustic music. I had dabbled with folk/rock classics from the '60s and '70s. My focus in music was more from a management perspective, most notably in assisting Michael Burks in becoming a beloved international blues star."

Following the unexpected death of Burks, Harris was relegated to breaking out his Martin D18 guitar and creating a duo with his wife, as they came up with a set list that included songs by Gram Parsons, Emmylou Harris, Bob Dylan, Jackson Browne, The Beatles and Linda Ronstadt. Two more noted local musicians — Bruce Hulsey on bass and Jeff Clanton on mandolin, guitar and slide guitar — came on board to flesh out the rock focus, but won't be playing with the duo Saturday.

"We added a few originals and turned it into a band format with Bruce on bass and Jeff on all kinds of instruments, but then the covid virus came along, so we've not had much playing or even rehearsing. We had a gig in September at the winery, and they are having us back this weekend."

The patio has heaters that will keep the outdoor temperature at 65 degrees, according to the winery's website.

◼️ Southbound Revolver, and opening act Carson Toland, will perform from 8 to 10:30 p.m. Saturday at Stickyz Rock 'n' Roll Chicken Shack, 107 River Market Ave., Little Rock. Admission is $5 per seat and all seating is reserved at tables for two. If any tickets remain on the day of the show, they will be available at the door.

Singer-songwriter Amy Rigby will perform a livestreaming show at 7 p.m. Friday from Arden Gild Hall in Arden, Del. Tickets, $15, are available at ardenconcerts.com.

Rigby's 2019 book, "Girl to City: A Memoir," is one of the more intriguing such books of recent years.

In 2004, Picott released the album "Girl from Arkansas" and years later opened a show at Stickyz Rock 'n' Roll Chicken Shack for his ex-girlfriend, Amanda Shires.

◼️ The String Cheese Incident's classic concert of Jan. 28, 2000, at Wool Warehouse in Albuquerque, N.M., will be broadcast at 7 p.m. Friday on nugs.tv. The streaming will be free.

◼️ The Jackie Venson Band will perform "Live at Purple Bee Studio" at 9 p.m. Friday. Tickets are $5, available at jackievenson.bandcamp.com.

Venson, a 30-year-old singer-songwriter-guitarist from Austin, Texas, released her debut album, "The Light in Me," in 2014. She began attracting national attention after a November performance on "Austin City Limits."

◼️ Singer-songwriter-guitarist Bill Kirchen will come to "Red Boots Roots" from his house at 6 p.m. Saturday on Facebook.

Kirchen was a founding member of Commander Cody and His Lost Planet Airmen in the 1970s.

◼️ Ani Di Franco will be a guest performer at the "Winter Hoot from Home" from 3 to 6 p.m. Saturday on Facebook, streamed live from the Ashokan Center in Olivebridge, N.Y. Admission is by donation; see hoot.love.

Barrett Baber, the Northwest Arkansas singer-songwriter who is now in Nashville, Tenn., has a lengthy Facebook post from Jan. 30 about his latest publishing deal, which was an answer to his prayers after the covid-related loss of his Sony Records contract.

◼️ Singer-songwriter Alejandro Escovedo, who recently turned 70, has been spending his down time writing a "mythical memoir," as he calls it in an interview with Canada's Calgary Herald, which notes that his contributions to a Calgary arts organization, The High Performance Rodeo — which was live on Jan. 30 on Instagram — is now available at hprodeo.ca.

Escovedo, notable for his stints in a trio of legendary rock bands, The Nuns, Rank and File and the True Believers, along with his solo career, delivered some of Central Arkansas' most memorable shows in recent years. (Check out his song, "Castanets," for a clue to Escovedo's power as a writer and a singer.)

◼️ Birds of Chicago will perform at 7 p.m. Wednesday as part of the 25 Years of Signature Sounds Series. Watch the livestream show at signaturesounds.com/homesessions, although a suggested donation is $25, on Venmo@signaturesounds

Melissa Carper of the groups Sad Daddy, The Carper Family and Buffalo Gals, has been chosen by Rolling Stone magazine as one of 10 country artists for its "RS Country Music Picks for the Week of Jan. 26th" for her song, "Makin' Memories." The magazine's website says: "Singer-bassist Melissa Carper sounds like a voice from a bygone era in 'Makin' Memories,' her first release from the forthcoming album, 'Daddy's Country Gold,' out March 19. Evoking the cool, smoky croon of a lounge singer, Carper gives some winking commentary about having a good time. 'I'm meeting new people, I'd like to recall/Some of their names, like Larry and Steve,' she sings, laying down a walking bassline that's accompanied by Brennan Leigh on guitar and Jeff Taylor on piano."

◼️ Wilco's richly melodic album, "Summerteeth," has a great, eminently timely song, "A Shot in the Arm" with its memorable lyric, "Maybe all I need is a shot in the arm." Listen to it at youtu.be/16wrXqunS8w.

Speaking of Wilco, if you go to the band's website, wilcoworld.net, check out the band's list of their favorite albums from 2020, including new albums by Fiona Apple, Bill Callahan, Bob Dylan, Will Kimbrough and Fleet Foxes, among lesser-known artists.

To have your live music event listed in Music Madness, email the information to jackwaynehill@gmail.com or jmcleod@adgnewsroom.com.