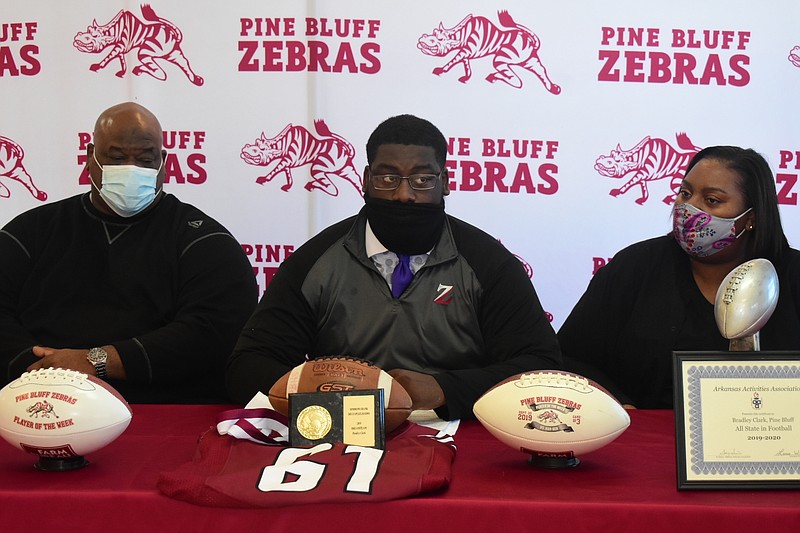 Pine Bluff High School defensive tackle Braylon Clark, center, finishes signing his letter of intent with the University of Central Arkansas on Wednesday at the high school's Student Center. He is flanked by his father, Richard Clark, and his mother, Loretta Givens. (Pine Bluff Commercial/I.C. Murrell)

The University of Central Arkansas garnered an All-State football player out of Pine Bluff for its fall 2021 season Wednesday.

Pine Bluff High School defensive tackle Bradley Clark signed a letter of intent with the Bears on the winter National Signing Day, and he hopes to start a family pipeline to the new Atlantic Sun Conference program.

"It's a great day," Clark said during a small ceremony inside Pine Bluff's Student Center. "I get to play on a higher level and my little brothers can play with me some day."

Brothers Braylon Clark finished his junior season with the Zebras, and Blake Clark is an eighth-grader who'll be on the Pine Bluff campus next season.

"He was that guy you could count on and depend on week in and week out, and that was from his 10th-grade year to his senior year," Stinson said. "You always want to have an anchor on that line, whether it's offense or defense. We knew defensively, with him in the ballgame, it gives us an opportunity every time, and that's all you can ask for, a kid who can go 100 miles an hour, is very coachable, will work his butt off. And the type of production he did from that position, he did a phenomenal job for us the past three years."

Pine Bluff finished the 2020 season 4-5 overall and 3-2 in the 6A East Conference, falling to Mountain Home in the first round. Clark's play did help the Zebras win three in a row to help solidify their playoff spot.

"We came together as a unit and decided to play like an actual football team and win games," Clark said.

Stinson said he believes Clark made the most of his opportunity in a season where covid-19 made a direct impact on the Zebras.

"The biggest thing was us quarantining and missing games," Stinson said. "That hit all of us. The biggest thing with offense and defense is having continuity, and you get that from playing. Us missing a few games early, we had a few guys who had the quarantine. That kind of hindered us a little bit, but that being said, we had an opportunity to play. We can't make excuses. We had an opportunity, and he did a great job for us, and I know he'll do the same at UCA."

Clark was one of 21 newcomers to sign with UCA, including White Hall wide receiver Kam Robinson (who officially committed in December) and Dumas running back Kylin James.

UCA, which announced in January it was leaving the Southland Conference for the Atlantic Sun, played nine nonconference games and went 5-4.