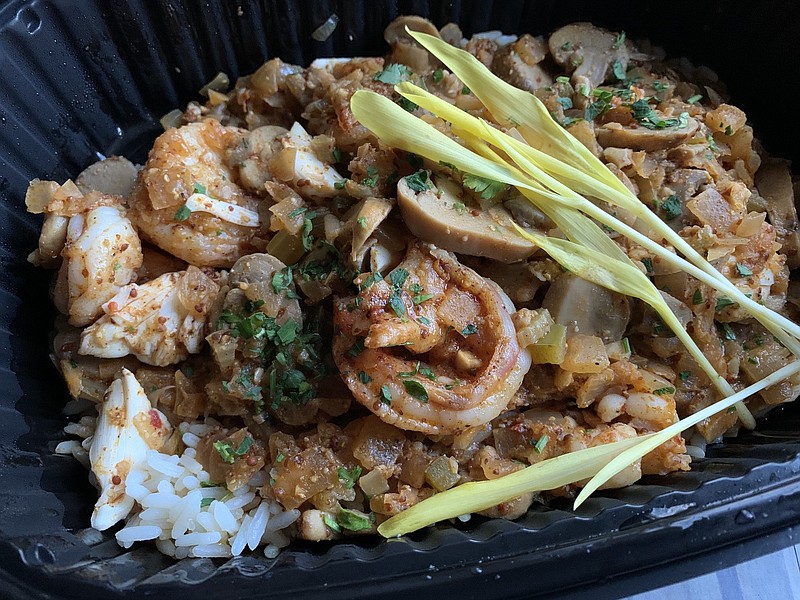 Our Redfish Pontchartrain from Cypress Social involved several layers of flavor and texture before we got down to the fish. (Arkansas Democrat-Gazette/Eric E. Harrison)

If Dr. Seuss had been toting up our to-go orders this week, our intro might read: "One fish, two fish, redfish, raw fish ..."

It has been another week of snatching up plastic bags full of food from local non-chain eateries (support your local merchants first, please, and remember to tip generously). We have striven to stay within a moderate "comfort zone" where that food stays hot or at least warm on its journey to our modest table. We pay for all our meals.

WHAT WE GOT: Redfish Pontchartrain ($28)

We've been seeking a way to finally try out Jim Keet's most recently launched restaurant venture, particularly after pleasant experiences with his Petit & Keet in west Little Rock. Cypress Social's upscale "Southern-inspired" menu includes this Creole dish, blackened redfish topped with huge, plump, firm shrimp; huge, plump, firm mushroom slices; crab meat (not a lot of crab meat, but enough to register), rice and "trinity." (Explaining that one required us to do a little research: also known as "holy trinity," it's the Cajun/Louisiana Creole variant of mirepoix. Whereas mirepoix is two parts onions, one part carrots, and one part celery, trinity is typically one part onions, one part green bell pepper and one part celery. Thus endeth the lesson.)

The fish was at the bottom of the plastic to-go container beneath a thick layer of flavors and textures that we had to work through. Luckily, we liked all of those flavors and textures, and also the fish itself, or at least its texture; although we couldn't really evaluate whether the blackening was successful, we did enjoy the mouth-feel.

HOW IT WENT: We perused the menu online and placed and paid for our order over the phone before the restaurant opened for the day; we waited in the front waiting area an extra eight minutes past the promised ready time. Curbside hand-over is available. Staying within our usual comfort zone in terms of distance was a challenge, but it actually took us longer to get there through just-before-rush-hour traffic than it did getting our food home, so we only exceeded our "limit" by about a minute.

HOW IT'S GOING: Ours was one of at least three to-go orders within a half-hour of the restaurant's opening. The phone rang more or less constantly with customers trying to make dine-in reservations. At one point, there was a large cluster of employees (at least half-a-dozen) around the hostess station, all of them wearing masks but hovering a lot closer to one another than the "properly" socially distant 6 feet. 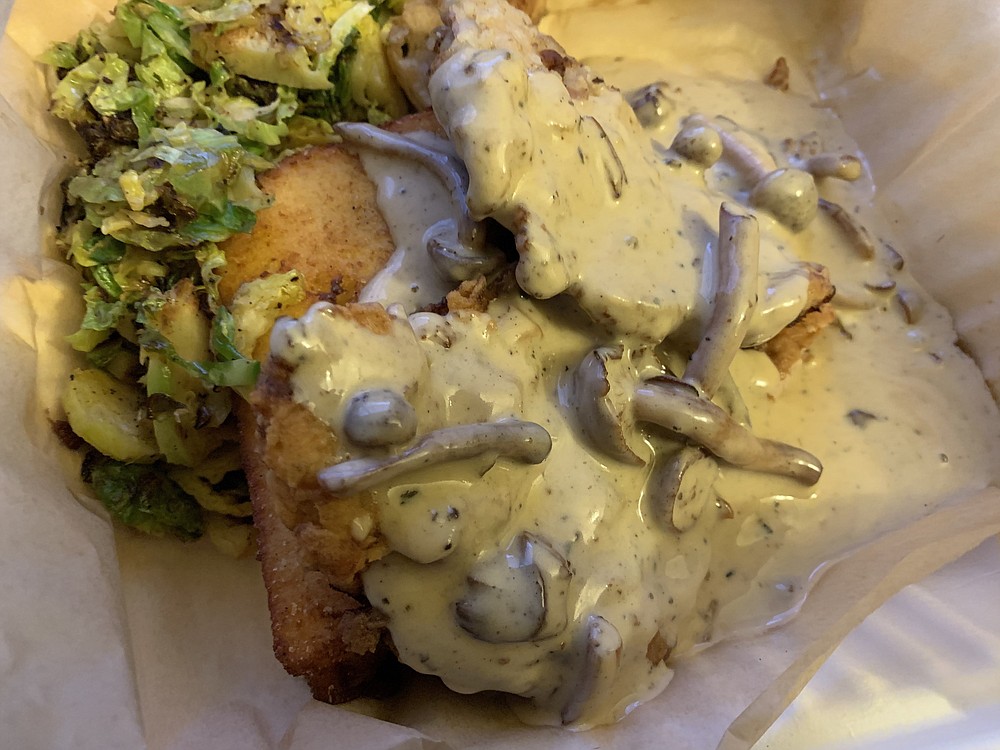 There are now actual mushrooms, not just hints of mushrooms, in the sauce for the Hog and Cake from Hill Station in Little Rock's Hillcrest. (Arkansas Democrat-Gazette/Eric E. Harrison)

We were very much impressed with this dish when we reviewed the restaurant not long after it opened and just before the pandemic made dine-in reviews impractical. We're equally impressed now, though its price has since gone up $4 — we're not sure if that's because of a higher cost for hog or cake or both.

The "hog" is two large and quite tender pork tenderloin medallions, lightly breaded and pan-fried and topped with a yellow-brown, somewhat mustard-y pan gravy. When we had this in-house, we discerned a possible hint of mushrooms. It no longer hints of mushrooms — they're actual, visible and plentiful. The grit cake used to be specked with spreadable goat cheese, though we didn't discern any in our to-go version; the sauteed spinach that was supposed to come on the side turned out to be pulverized brussels sprouts.

HOW IT WENT: We ordered online and paid on pickup, not at the front door, but back in the kitchen, where there is set up a to-go order station. Ours was just on the verge of being bagged up when we arrived, within the 20-minute promise time.

HOW IT'S GOING: The dining room is open and many tables were occupied; the heated outdoor patio was pretty busy as well. 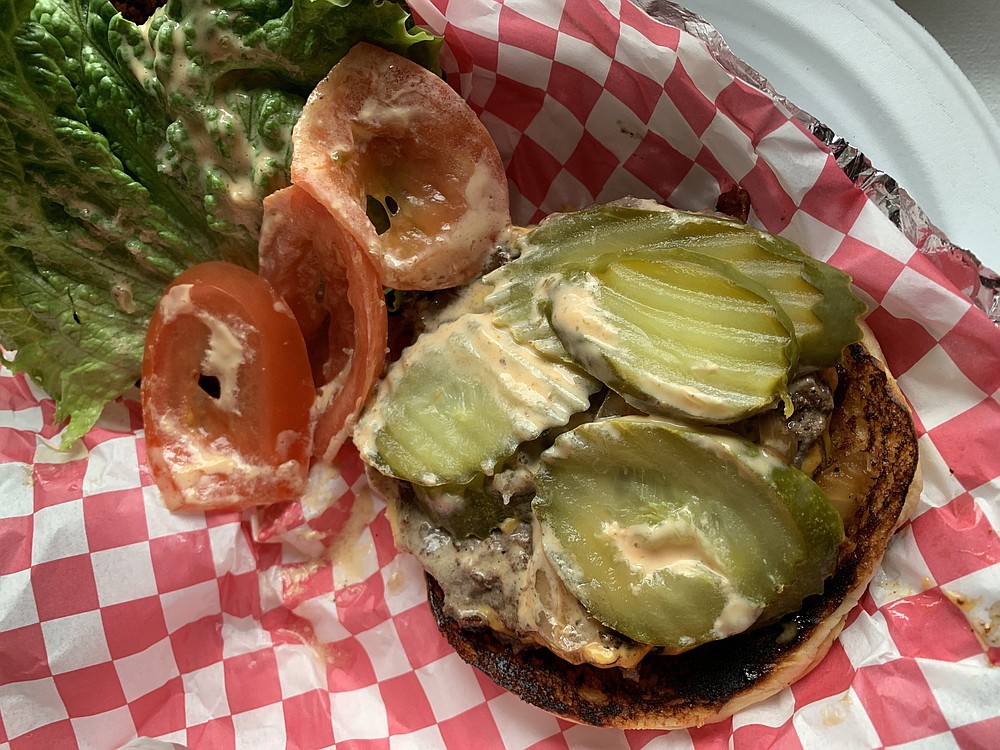 The Excaliburger food truck has been beta-testing vending its eponymous burgers via a modified "drive-thru" process. (Arkansas Democrat-Gazette/Eric E. Harrison)

We occasionally patronized Excaliburger when it was parked Monday nights on the lot of the defunct Hillcrest garage that Hill Station now occupies, but we confess we've never visited often enough. Nostra culpa. We reveled in being able to renew our acquaintance with the eponymous burger — two well-grilled patties topped with grilled onions, bacon, pickles, lettuce, tomato and a pinkish dressing, all on a somewhat squashy oversize bun. We shed the lettuce and the tomatoes, which we do not generally eat on burgers (the tomatoes we consumed separately); the online pre-order process didn't give us an option of having them left off at the source. The rest we ate with gusto and a touch of undue haste. (Can you say "wolfed down?" Sure you can.)

HOW IT WENT/HOW IT'S GOING: Owner-chef Kyle Pounders was in the initial days of a beta-test version of a "drive-thru" set up in which customers who had pre-ordered their burgers via the website drove their cars by the food truck, which has been parked on an office building lot. All went fairly smoothly except for the more than 25-minute wait, customers showing up more quickly than the folks in the food truck could churn out burgers. There were nearly a dozen cars ahead of us when we arrived shortly after that day's noon kickoff and another dozen cars in line behind us when we eventually got our burger. That we could stay in our vehicles listening to whatever we listen to while checking emails and social media or whatever we do on our phones made the wait more endurable.

Pounders checked in with the next three or four customers in line as they got near the truck to make sure their names were on the list and to confirm how many burgers needed to be in progress to fulfill their orders. Ours came in a paper-foil wrapper inside a brown-paper bag and stayed hot for the eight minutes it took us to transit Cantrell Hill to Stifft Station. At last check, Pounders has said he'll keep the "drive-thru" project alive and hiring more staff, opening as a "normal drive-thru" and turning it more into a burger-on-demand operation. 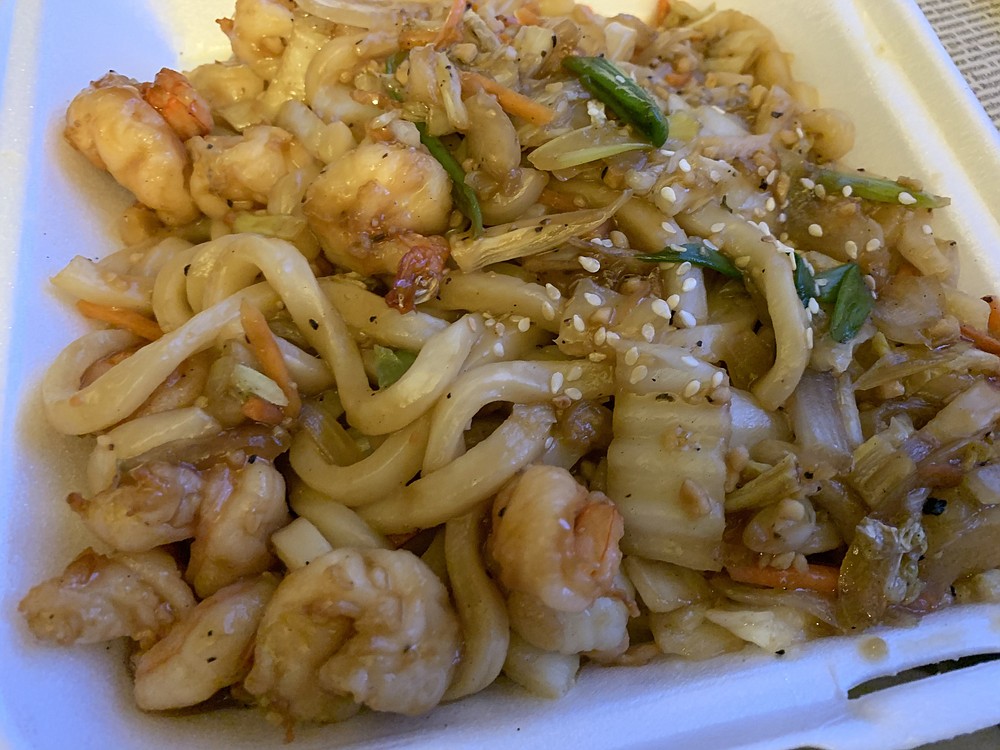 This is the sushi-hibachi place that replaced Oceans at Arthur's in the Village at Rahling Road space just off Rahling, which is just off Chenal Parkway. We veered away from hibachi entrees and opted instead for a dish with thick, chewy noodles at its base, dressed up with veggies and garnished with sesame seeds, plus a goodly quantity of medium-size grilled shrimp. The dish was certainly garlicky — bits of visible, mouth-feel-able garlic throughout, with a definite garlic odor infusing our car all the way home.

We also felt obligated to try a sushi roll; this one featured salmon and avocado with white tuna (more properly known as escolar) on top; it was supposed to come with ponzu sauce but that was apparently just a ponzu scheme. The roll was OK without it but probably would have been a good deal livelier with it.

HOW IT WENT: We phoned in the order and were told it would be ready in 10-15 minutes, but they were just bagging it up when we arrived 20 minutes in. The wait staff and bartender were being run a bit ragged, both by dine-in customers and answering the phone, which rang almost constantly, so it took a few more minutes for somebody to take and process our credit card.

Here, too, we decided to take a flier on a place at the very edge of our comfort zone; by bending the speed limit a bit, we shaved a couple of minutes off the estimated 18-minute travel time and the food was still hot — well, not the sushi roll — when we got it home.

HOW IT'S GOING: There were several tables' worth of dine-in customers; there was also a line of three or four others picking up to-go orders for themselves or for third-party delivery.