Turkey basics: Prepare now to bag a gobbler in April 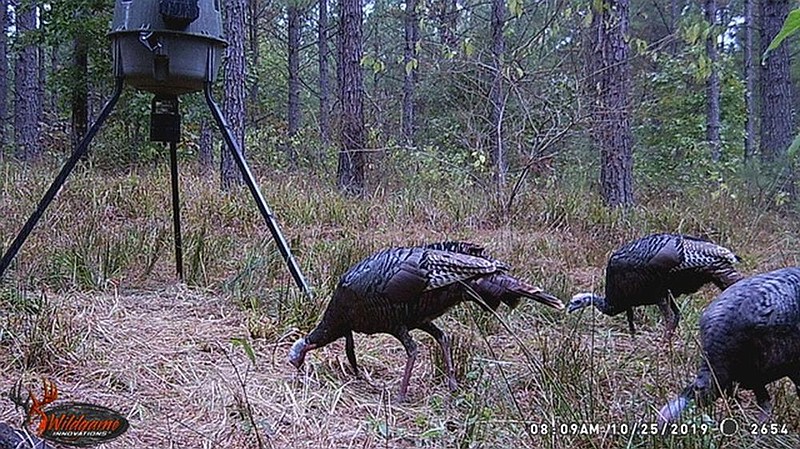 It’s exciting to see gobblers on your game cameras in the offseason, but they don’t guarantee those birds will be in the area in April, especially since feeders must be empty and deactivated well before the season begins.

The application for controlled spring turkey hunts on wildlife management areas will end Feb. 15, and applicants should begin preparing for success now.

Hunters should also prepare to hunt other areas if they do not draw a coveted WMA permit. Newcomers to turkey hunting have an even tougher course to run because they have so much more to learn, but preparing now can lower the hurdles.

Hunters are allowed to apply for two WMA turkey hunt choices. You can apply for single hunts on two areas, different hunts on one area or for the same hunt on the same area. Obtain maps from the Arkansas Game and Fish Commission for your areas and study them. Your primary objective is to get away from other hunters, most of which tend to hunt close to roads. By outdistancing the competition, you will improve your chances of working a gobbler alone, and you will reduce the chances of another hunter picking off one that you are working.

Gobblers often roost over water. Look for remote, hard-to-access areas along big creeks and small rivers and plot potential routes to ridges overlooking creek bottoms. In mountainous or hilly areas, beware of deep creek bottoms that appear to be far from roads but really aren't. Hunters often sit along roadsides or creep about with windows open listening for gobbles. If they hear one, they will often bail off down a hill to intercept a gobbler you're working.

Experienced turkey hunters often have favorite spots on public areas where access is not controlled. WMA permits are hard to draw, so newcomers are wise to identify such areas, as well. It disrespects the resource and it disrespects other hunters to direct anybody to a specific region or area. Suffice to say that ample opportunities are available in the 1.5-million acre Ouachita National Forest, in the 1.5-million-acre Ozark National Forest and in a myriad other WMAs with open access.

The Arkansas Game and Fish Commission's WMA managers are usually helpful, especially if you frame your questions thoughtfully. A cold call to an area manager is kind of like a job interview. If you start a job interview asking about benefits, paid leave and other perks, you won't get far.

Likewise, you probably won't get far asking an area manager, "Where can I kill a turkey on Cut-off Creek WMA?"

Instead, ask questions like, "Where are some of your most consistent roosting areas? Are there any open areas near cutovers? Are there any places that have been recently burned? What parts of the area get the most hunting pressure?" Questions like these reveal that you have a working knowledge of turkeys breeding, feeding and nesting habits. You're telling a resource manager that you're competent and that you are interested in more than just killing a gobbler. You want to hunt a gobbler, and you're looking to narrow options of where you can put your skills to work.

Last year, for example, I won a highly coveted controlled turkey hunting permit at Cross Timbers Wildlife Management Area in Oklahoma. I arrived three days before the hunt opened and began scouting. I was the only person that arrived before the eve of the hunt. The area manager, an avid turkey hunter, respected that and spent considerable time providing me with valuable information that ultimately helped me kill my finest gobbler ever.

Early February is too early to begin scouting intensively for turkeys because what they are doing now is not what they will be doing in March and April. Gobblers and hens are separated and there is no breeding activity occurring.

However, now is a good time to survey the woods you intend to hunt and identify the most promising areas. Familiarize yourself with your area. Find the best routes into your woods in the dark, routes that enable you to skirt roosting areas and minimize the chances of spooking birds on your way in. Memorize the route because it will look different in the dark.

If you hunt on private land, you might install remote cameras at promising areas to tell you if turkeys frequent them or even visit them at all. Photographic evidence in February is not particularly useful for hunting in April, but if you know turkeys are using an area, you can look closer to find out why.

Few things raise a turkey hunter's spirits more than game-cam photos of broom-bearded gobblers. Show them to friends only if there is no chance of them knowing where the photos are taken or if there is no chance of them hunting the property. A good friend would never encroach on your area, but a friend of a friend will. Turkey hunters become notoriously unsociable this time of year, and nobody takes it personally. We'll all be buds again when the season is finished.

My father didn't hunt turkeys, but he was a passionate duck hunter. He kept a duck call in his car and practiced whenever he was in his car. My uncle Jack Jernigan was his favorite hunting buddy. When they called each other, they began the conversation by blowing duck calls into their phone receivers.

Turkey hunters often start practicing right about now. If you're a newcomer, intensive practice now will make you competent on opening morning. A diaphragm call is a hands-free device, so it's versatile and enables you to practice in any situation where the task at hand requires both hands. If you can make turkey sounds with your own voice, you are well ahead of the game.

The diaphragm is so versatile that many hunters have eschewed manual calls in its favor. I am not among them. Aside from being collectible and artistic, box calls and pot (slate) calls diversify a hunter's sonic palette. It might temporarily strain some domestic relationships when you work calls while somebody is trying to watch TV, but the offended will get over it.

It is not enough to simply know how to make turkey sounds. Learn the art of conversation. You need to know what why and when turkeys say what they do, and you need to learn to converse fluently. I learn a lot listening to live turkeys and by calling to my neighbor's turkeys. If live birds are not available, there are many tutorials on YouTube that are very educational.

As Will Primos says, "Speak the language."

When you fit all these pieces together, you will have solved most of the puzzle.

Editor's note: Arkansas Democrat-Gazette subscribers are invited to join us by Zoom on March 6 at 10:30 a.m. to discuss turkey hunting in Arkansas. To register, visit arkansasonline.com/all-access, or call (501) 378-3871.