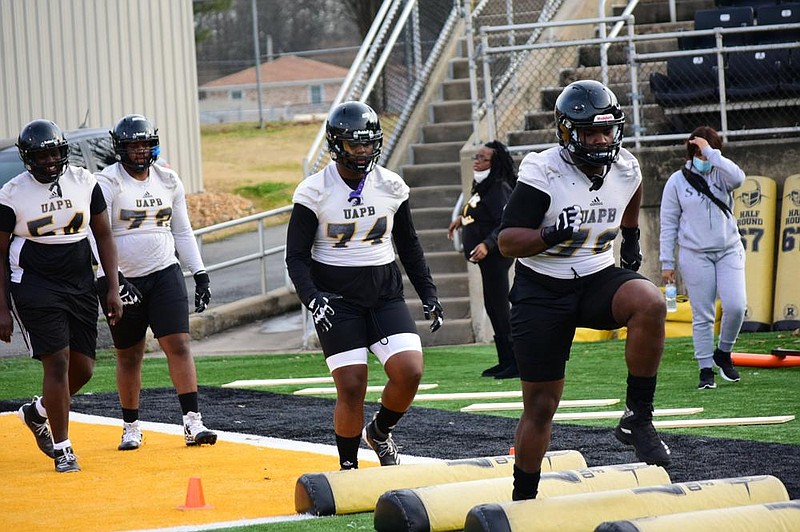 That's the first of two football games between the sister institutions to be played in the state capital, the UA announced Wednesday. The Golden Lions and Razorbacks will also meet Aug. 31, 2024, at War Memorial.

Fayetteville-based UA announced an extended agreement with the Arkansas Department of Parks, Heritage and Tourism through 2025, which also includes a game early that season against Arkansas State. The agreement called for Arkansas to move its previously scheduled games against UAPB from Fayetteville and schedule the Sept. 2, 2023, Western Carolina and Sept. 6, 2025, Arkansas State games for Little Rock in exchange for adding 2021 and 2023 games against Southeastern Conference foe Missouri to its Fayetteville slate, according to WholeHogSports.com.

The end result is a much shorter trip for Golden Lion fans from Pine Bluff.

"This is very big for [UAPB] and the football team," former Lions Coach Lee Hardman said. "To get a chance to play the Razorbacks, and we know the history on that, it's an opportunity, once in a lifetime. I know everybody is excited about playing the Razorbacks, but to move it to Little Rock, that made it even bigger."

UAPB and Arkansas will meet for the first time on the football field. The games are significant because Arkansas traditionally did not take on in-state opponents in major sports until Hunter Yurachek, who became Arkansas' athletic director in 2017, loosened the university's longtime ban against playing in-state teams. The UAPB baseball and women's basketball teams have taken on Arkansas in recent years.

War Memorial Stadium had been a home away from home for UAPB football in past years, but not since Nov. 18, 2017, when Texas Southern defeated the Lions 24-10 to end UAPB's 2-9 season.

"When I first got to UAPB as a football coach, we didn't want to bring recruits to Pine Bluff because of facilities," said Hardman, who coached Dollarway High School to four state football championship victories at War Memorial between 1988-92. "We recruited in Little Rock because that was a nice facility and to bring them down to Pine Bluff would make it hard on the players who would see other schools and facilities."

Hardman oversaw the Lions when they transitioned from National Association of Intercollegiate Athletics membership to National Collegiate Athletic Association Division I status in the late 1990s and moved from Pumphrey Stadium to Golden Lion Stadium (now Simmons Bank Field) in 2000. He said UAPB would usually draw big crowds to Little Rock while showcasing its program to fans from across the state.

Depending on fan restrictions, Golden Lion fans who attend the 2021 game against Arkansas will be treated to a facility that has undergone $2.1 million in renovations, according to WholeHogSports.com.

"If they don't put no restrictions on it, it'll be a packed house," Hardman said. "A lot of fans in Pine Bluff and Southeast Arkansas don't get to see the Razorbacks. To see the Golden Lions as well as the Razorbacks, I think that's outstanding."

In a news release, Yurachek called the in-state games historic and said he is grateful for the parks department and stadium to allow Arkansas to host Southeastern Conference games on the Fayetteville campus.

"Including U of A vs. UAPB and U of A vs. Arkansas State games beginning this year and through 2025 will present some exciting intrastate competition," parks department Secretary Stacy Hurst said in a UA news release. "We look forward to showcasing an improved venue and to welcoming people from across the state and beyond to historic War Memorial Stadium."

UAPB is playing a six-game Southwestern Athletic Conference spring schedule beginning Feb. 27 in Pine Bluff against Texas Southern. The SWAC and other Division I Football Championship Subdivision conferences postponed their schedules from the fall to the spring.

Eight high school players signed with the Golden Lions on National Signing Day, including the son of a former Lion who went on to the NFL.

Courtney Van Buren II of Stafford, Va., is a 6-foot-4, 300-pound offensive lineman whose father was drafted in the third round by the San Diego (now Los Angeles) Chargers out of UAPB in 2003. The elder Courtney wound up his career with the Detroit Lions in 2007.

Van Buren II played his senior season at Trinity Catholic High School in St. Louis after the Virginia high school football league opted out of fall competition, according to UAPB. Van Buren earned second-team all-state honors and was a region wrestling champion as a junior.

• Tavon Hardwick, a 5-10, 180-pound athlete from Dayton, Ohio (Belmont High) who played quarterback, running back, wide receiver, cornerback and free safety and is a track sprinter;

• Kameron Ingram, a 5-10, 185-pound running back from Fayetteville who rushed for 712 yards and seven touchdowns;

• Kaleb Knox, a 6-1, 180-pound defensive back from Alexander (Bryant High) who made all-state and is a two-time all-conference selection; Knox totaled 30 solo tackles, five pass break-ups and won three state titles at Bryant;

• Kaleb's twin brother Kyle Knox, a 6-1, 180-pound defensive back from Alexander (Bryant) who made all-conference twice, totaled 20 tackles and set a school record with a 106-yard interception return;

• Jalen Macon, a 6-5, 220-pound quarterback from Nashville, Tenn. (Hillsboro High) who passed for more than 1,200 yards and 16 touchdowns and is also a talented basketball player; and