Jefferson County Judge Gerald Robinson gave his third annual State of the County Address Thursday morning reflecting on the past to understand the present for a hopeful future. In front of a limited-capacity crowd, due to covid-19, Robinson spoke about valuable lessons learned from the past, which now guides him.

For Robinson, his term started with a vision and determination.

"When we started this journey in 2019...the county was in dire straits and financial ruins," said Robinson, who added that the county had a bad credit rating.

At the time that Robinson took office as county judge, the county, he said, was one catastrophe away from bankruptcy with $27,000 in the reserve funds.

"We were on a sinking ship without any life vessels to help us float if we needed to save ourselves," he said. "The vision was to get the county back on a financial status that we would be able to service the people of the county efficiently, effectively, and the most cost-effective way possible."

Robinson said he had to make some difficult decisions that many did not agree with but in the end, he has put the county in the best financial position it has been in a long time. County employee raises, he said, had not happened since 2011.

"It was shameful when I came in what some of the employees were making," Robinson said. "We had to do better and we are. We must be able to give employees a living wage in order for them to live."

Currently, the county has more than $3 million in the County General Fund, $953,000 in Public Safety Fund, $2.8 million in the Detention Center Maintenance and Operation Fund, and $523,000 in the Reserve Fund. By making drastic cuts to employees and inventory, the county, he said, was able to bounce back from an economic deficiency by working together with elected officials, mayors, community leaders, private citizens, and businesses that believed in his vision.

Robinson said those three areas were vital for Jefferson County to be able to move forward.

"Were we divided? I would say so because everybody was trying to make their own way," Robinson said. "We needed the vision so that everyone could walk in the same direction."

Currently, Jefferson County is seeing growth in business development despite the decline in population, which, officials are expecting, will change once several housing projects are put in place. While three county buildings are currently under construction, Robinson also spoke about other future projects that, when completed, will provide a plethora of jobs. The newly constructed Saracen Casino, once finished with the addition of the hotel, will employ roughly 1,100 people. A new Carti Cancer Center and Children's Clinic is being constructed, which will attract professionals to the area. The Pine Bluff Arsenal and The Cornerstone Processing Chicken Plant are also bringing in new jobs, some starting at $19 an hour, Robinson said.

Robinson said that under his leadership, there have been investments in technology and energy efficiency such as the solar panels located at the Juvenile Justice System. A $500,000 investment in the Road Department has allowed the county to give more attention to county roads.

"When they call in about a road that is all bumpy and torn up, we can go and grind up that road and resurface it just like it was brand new," Robinson said." We are moving forward so that we can be the most efficient to the people of Jefferson County."

The road to the future hasn't been an easy ride, though. Robinson said he faced many unforseen obstacles along the way that gave him him a rude awakening. From the flood, straight-line wind storms to the covid-19 pandemic, Robinson said he's had a fight on his hands.

"The one thing this pandemic has caused us to learn is that we were not prepared but it has also helped us to get prepared," Robinson said. "By going through these tough times we are coming out better on the other side."

Robinson said, had these catastrophes happened during the beginning of Robinson's tenure, the county would have had little ability to cope with them. And by making budget cuts and challenging his employees to find ways to generate revenue, Jefferson County is an example of what you can do when everyone works together.

Even the justices of the peace are active in the county, visiting various offices to better understand of the day-to-day operations of the county, he said.

"They understand the challenges that Jefferson County has," Robinson said, referencing the justices of the peace, who he believes have been very supportive of his efforts. "Never in my past dealings have I had quorum court members that are interested in what is going on in each office -- that's what we need because the goal is to be one Jefferson County."

Robinson said he would like to to set the county up financially with at least $12 million in reserve funds. He also said he wants to better serve the public, whether that be through online resources, in-person meetings or even visits to local shops where people buy medication. Robinson said he plans to invest in technology that will meet the needs of the citizens and to update the county website for a more user-friendly experience -- the website updates will provide transparency for everything from finances to county projects.

A county annex is also a vision Robinson said he would like to see come to fruition.

After the pandemic forced the judge to find innovative ways to keep his staff safe but still conduct the business of the county, he said he realized the courthouse wasn't sufficient enough to handle the task.

"The present courthouse we have today does not sustain the technology that we need, the space we need to operate, and the storage capacity we need," said Robinson, who added that most courthouses around the state have annexes.

The future growth of Jefferson County is anchored by the recruitment of new businesses and by creating employment and technology growth, the judge said.

Robinson said the growth of Jefferson County would not be possible without God, first and foremost, and the unity of everyone from top to bottom standing together and working together as one.

"I want people to understand that we have a lot to be thankful for," Robinson said. "Just a few weeks ago we saw something at our nation's capitol that we never thought we would see -- we didn't have none of that in Jefferson County."

Robinson said while other counties around the world were experiencing division among political parties, even when the decision was made to remove the confederate statue from the courthouse, there was no conflict, confusion, or division in Jefferson County.

The judge said that while much has been accomplished, there is more work to do.

"We are on the verge of becoming the apple of the eye of the state," Robinson said. "Believe me, all eyes are on Jefferson County." 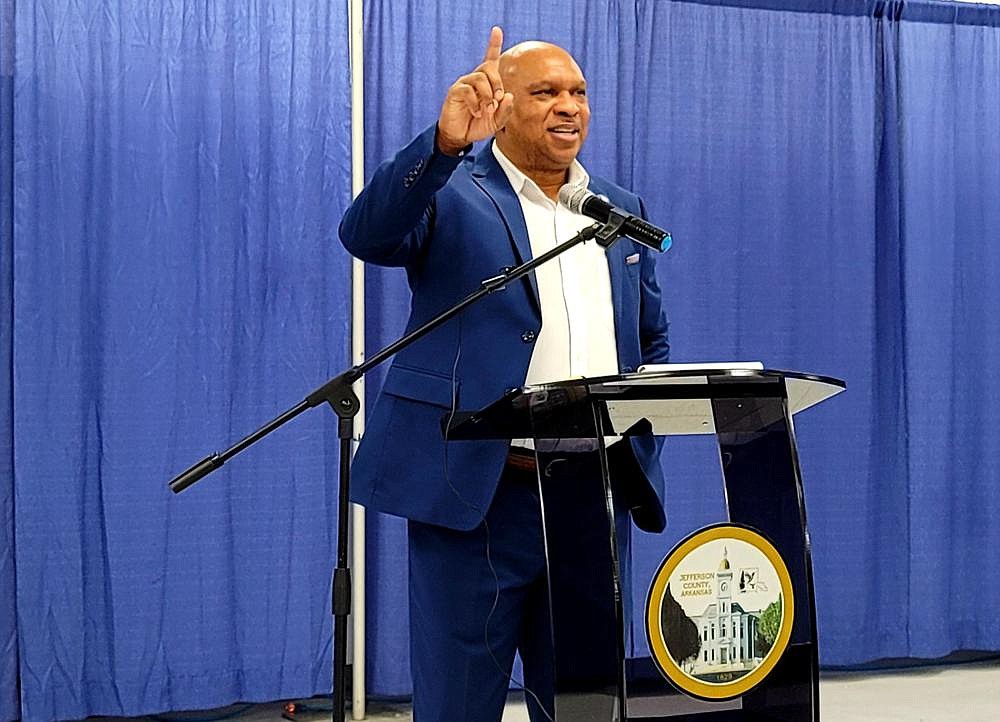 County Judge Gerald Robinson said during his State of the County address that his goal is to be "one Jefferson County.” (Pine Bluff Commercial/Eplunus Colvin)
ADVERTISEMENT