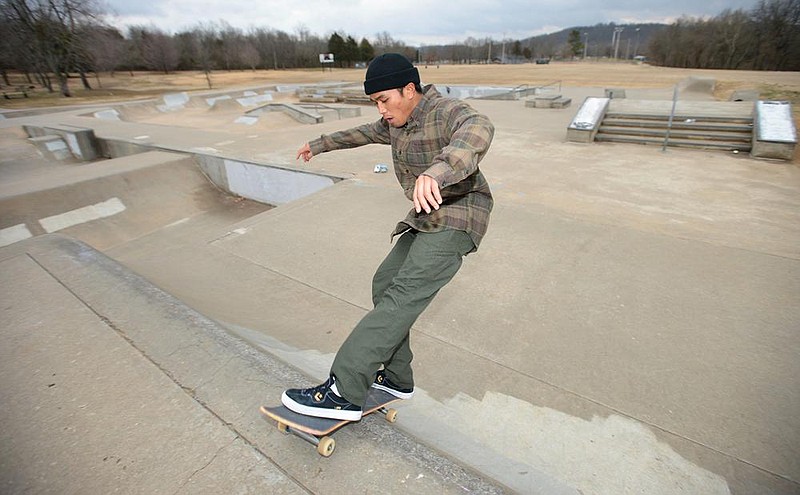 FAYETTEVILLE — The future is bright for the skateboard park at Walker Park.

The lights skaters, skateboarders and bikers have sought for years at the park should appear midway through the year.

The City Council on Tuesday approved a nearly $88,000 contract with Electrical Resources in Centerton to install lights at Grinders Skate Park at the southwest corner of Walker Park. The lights will be attached to 40-foot-tall poles, with two poles having four fixtures and four poles having three fixtures, Park Planning Superintendent Ted Jack said.

The city hired Engineering Elements in Fayetteville a few months ago for $4,500 to design the lighting. Total budget for the project is $98,000. The money is coming out of the capital budget for parks.

Lighting the park isn’t as simple as sticking a light on top of a pole, Jack said. Skateboard parks, with bowls and blocks and rails and hubbas — the ledges that angle downward — aren’t flat. Angles have to be accounted for with lights placed high enough so people don’t get a glare coming straight at their faces, he said.

“People doing these tricks don’t want to leave a bright area and have to land in a dark area where you can’t see well,” Jack said.

The lights will point straight down to avoid contributing to light pollution in the night sky. A switch will turn them on, but a timer will turn them off. They’ll also make for good lighting for videos, Jack said.

The skateboard park was built in 2003 and was designed by California firm Purkiss Rose with input from residents, according to the city website. Professional skateboarder Frank Hirata led several design meetings, and C-Tec contractors in Nebraska built the 18,870-square-foot course. Several grants helped pay for the park’s construction, including a $100,000 Arkansas Parks and Tourism grant, $5,000 from the Tony Hawk Foundation and more than $5,600 in donations raised by residents.

Wheel-sport enthusiasts have wanted lights at the park for years. In 2017, resident and BMX bike rider Connor Williamson helped circulate a petition that gained more than 500 signatures to illuminate the park.

Williamson moved to the city in 2015 as a freshman at the University of Arkansas. He said he would take his bike to the park after doing schoolwork and was quickly bummed once he discovered no lights came on at dark.

The park attracts skaters of all skill sets, Williamson said. The park has a group of dedicated users who visit almost daily even in colder months, he said.

“I really do think it is the best skate park in NWA, except for the fact that it does not have lights,” Williamson said.

Roy Rodezno is part of the Northwest Arkansas Skateboarding Association, a nonprofit group which launched in 2018 and is trying to get cities to invest more in skate parks. Skaters will skate regardless and will make the most of their surroundings, but an adequate course will always get their attention, he said.

Having lights at Walker Park will put the skaters there at night, rather than in random places throughout the city that may simply have a street light, Rodezno said. Adults skateboard, too, and the lights will provide a place for them to go in the evening, he said.

“To a city, it could be just a small thing like lights, but it’s going to have a major, major impact,” Rodezno said.

David Wright, Benton-ville’s park director, said people were asking for lights at the Walker Park skateboard park when he worked for the Fayetteville Parks and Recreation Department a dozen years ago. He said he wasn’t sure why they weren’t included but imagined it was a cost-cutting measure.

The skateboard park at Memorial Park in Benton-ville has lights that stay on until 11 p.m., although the park is much smaller than the one in Fayetteville, Wright said. Proper lighting adds a level of accessibility that simply won’t happen without them, he said.

Skaters can be found on any given night at Memorial Park, Wright said, especially with the pandemic restricting indoor recreational activities. Park and trail use was already high in the city but skyrocketed after covid-19 hit the region, and the skateboard park’s use is comparable, he said.

“Fayetteville will see its numbers double. It’s such a good investment,” Wright said. “I have witnessed it firsthand in our small skate park that is not even 50% what the one in Fayetteville is.”

The city may soon get a comparable skateboard park. The planned 8th Street Gateway Park on 100 acres west of Southwest Eighth and Southwest I streets has a skateboard park included among amenities. The project depends on the City Council putting a referendum to voters and voters approving it, providing $30 million for park projects within a $266 million bond project package.

Jack said he hopes to expand Fayetteville’s skateboard park. A conceptual plan for Walker Park created in 2017 shows an addition extending from the skating area to the Razorback Greenway to the west, creating a sort of entrance hub with a pavilion, lawn and amphitheater to the north.