Magic, slim plot in 'Earwig and the Witch' 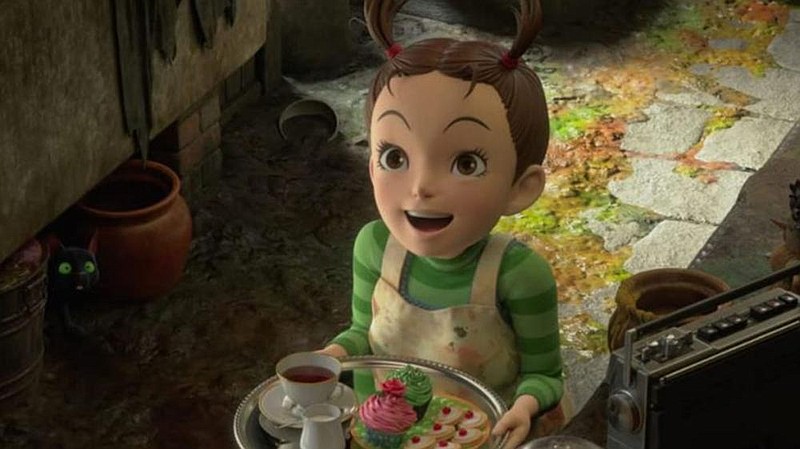 Plucky orphan Earwig (Taylor Henderson) is apprenticed to a stingy witch-for-hire Bella Yaga in "Earwig and the Witch,” now streaming on HBO Max.

Say the name, and you've got my attention. Hayao or Goro, I love talking about their movies. And today, folks have a chance to see a new movie from Studio Ghibli by Goro Miyazaki called "Earwig and the Witch."

This movie, in particular, marks a special occasion for Studio Ghibli, responsible for films such as "Spirited Away" and "My Neighbors the Yamadas." It's the first 3D Computer Generated Imagery animated film by Studio Ghibli. This is a studio that has turned out some truly beautiful traditional 2D animation through the years.

Its style is so iconic you know it when you see it.

So making the jump to 3D CGI left me a little wary. Companies like Pixar and DreamWorks turn out some really amazing 3D CGI art, but given the choice between that and a traditional 2D animated movie, I'll take the latter every time.

One of the things I like about anime, as a medium, is it still offers plenty of traditional animation. But I also know from watching movies like "Altered Carbon: Resleeved" and the "Dragon's Dogma" series that 3D CGI doesn't automatically ruin a show.

So keeping that in mind, along with the fact that we're talking about Ghibli, a studio that can do no wrong, I loaded up my review copy of "Earwig and the Witch," (courtesy of GKids) and sat through the latest offering from Goro Miyazaki, son of the legendary animator Hayao Miyazaki.

My overall impression is this was a fun movie, and it somehow, against all odds, dug itself a little nook inside my heart.

I didn't watch any trailers for this movie, but I'd seen some still images showing what looked like some kind of rock band performing on stage. That turned out to have a smaller role in the movie than I imagined.

The story opens with a red-haired witch, on the run from ... some other witches who are never really shown. She drops off her baby at an orphanage with a cassette tape, promising to return one day.

She names her baby Earwig, and the child grows up in the orphanage. Cut to present day (a small town in 1990s England), and Earwig pretty much has full control of the other kids in the orphanage. She's used to getting her way, and there's a little bit of a bratty tendency. But the film is careful to play her off as more of a young con artist than an annoying loser like Caillou (rest in pieces).

A grouchy couple (consisting of a witch named Bella Yaga and a demon named Mandrake) show up one day and adopt Earwig. Bella Yaga just wants an extra set of hands to do grunt work, helping her make potions. And Mandrake ... well he just doesn't want to be disturbed, ever.

Beyond all that, I really can't tell you too much about the story because there isn't much of one. The movie is based on a book of the same name by Diana Wynne Jones. The story mostly just follows Earwig trying to survive living in a house with a witch and a demon while doing all her chores. She eventually meets a talking cat named Thomas, and high jinks ensue.

All in all, it's a little low-key.

The movie's real strength is in its aesthetic and characters. While the plot is thin, it does slowly reveal who Bella Yaga and Mandrake were in the past and how they're connected to Earwig's mother. We also see why they're so bitter in the present day.

Earwig made me laugh a lot. I'm a sucker for tough and scary guys in movies that are actually big softies. That's pretty much Mandrake's whole character. He's got this awful temper. His glasses fill with fire, and things burn around him when he's mad. But he also takes a liking to Earwig and delivers her tea and treats while she brews potions. It's developments like this that endear.

"Earwig and the Witch" also has this aesthetic that combines rock music and spellcraft I fell in love with. There's a band in the movie that plays the main track of the film, titled, "Don't Disturb Me." We're treated to bits and pieces of the song through flashbacks and recordings. It mixed really well with the magic vibe of the movie.

Then again, I already knew rock music and witches were a great combination thanks to Scooby Doo introducing The Hex Girls in 1999.

"Don't Disturb Me" sounds like a wonderful cross between Kansas and Heart, lots of keyboard and electric guitar with Ann Wilson on vocals. That and the rest of the swinging rock score the movie had really helped make up for the story.

It's the plot that shows up as the movie's biggest weakness. While I enjoyed how the film took its time and revealed background information through flashbacks and things Earwig found in the house, that doesn't fill in all the holes left by the rest of the story.

The witches chasing Earwig's mother at the start of the movie are never seen again. And though some kind of witch council is mentioned a few times, the movie never really addresses who they are or why they're mad at Earwig's mother.

The audience is never shown Bella Yaga and Mandrake putting two and two together to figure out who or what Earwig is, and I'm left wondering if it's just pure coincidence they adopted her, or if they showed up at the orphanage to get her on purpose.

And the ending, while not the worst thing in the world, just left me feeling unfulfilled. Because I wanted more. Not, as in, that was so amazing I want more. But more, there's missing pieces to "Earwig and the Witch" that I need for the film to feel complete.

As for the animation, I have mixed feelings about it. "Earwig and the Witch" was made for television, so there were probably resource limitations compared to other feature films Studio Ghibli has made.

Earwig never looks bad, but Thomas the cat looks like a reject from "Paw Patrol." The detail given to Bella Yaga's curly purple hair is beautiful. But the food shown certainly lacked the signature Miyazaki yum factor.

It's a small detail, but typically, when you watch a Miyazaki film, the food looks delicious. Whether its bacon and eggs in "Howl's Moving Castle" or noodles from "Ponyo" or pork and vegetables in "Spirited Away," the animation of food is always something to write home about.

Then again, maybe it's unfair to compare Goro's work to his father's.

Maybe Goro Miyazaki isn't going to churn out epic adventures like "Princess Mononoke" or "Nausicaä of the Valley of the Wind."

He tried that with his debut film, "Tales from Earthsea," which wasn't awesome. It was lukewarm, which I think surprised a lot of people who expected more from a Miyazaki.

Instead, I think Goro's strength is with smaller heartwarming stories. His best work thus far is "From Up on Poppy Hill," which is a fantastic coming-of-age film.

"Earwig and the Witch" is a decent movie, and a prime example of style over substance. The music, the characters, and the aesthetic come together to outweigh the lukewarm animation and thin narrative.

My hope is Studio Ghibli looks at "Earwig and the Witch" as an experiment in 3D CGI. One that convinces them that while they can make movies this way, they probably shouldn't.