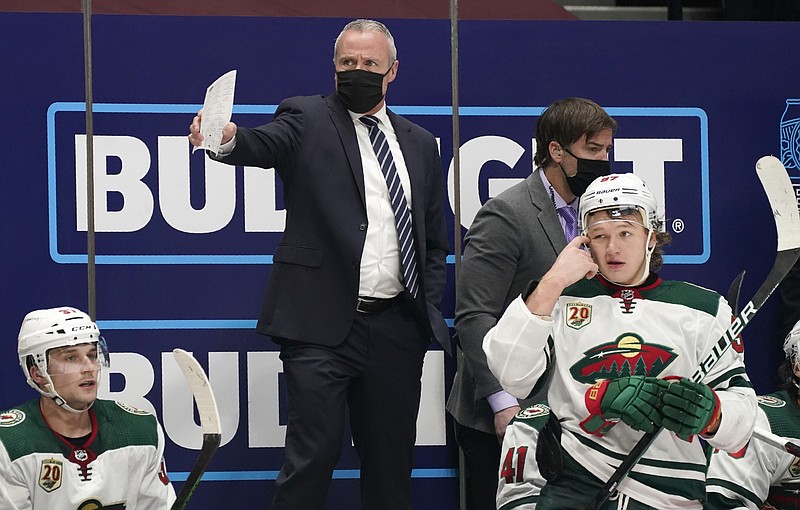 Minnesota Wild coach Dean Evason, back, directs the team during the third period of an NHL hockey game against the Colorado Avalanche on Tuesday, Feb. 2, 2021, in Denver. (AP Photo/David Zalubowski)

With covid-19 problems cropping up and four teams currently idled, the NHL has revised its virus protocols in a bid to keep the shortened season on track.

Glass panels have been removed from behind benches for better air flow, players and coaches are not allowed at the arena until 1 hour and 45 minutes before the game unless they're getting treatment for injuries and all meetings must be virtual.

Commissioner Gary Bettman said the league is mindful there might be "more aggressive transmission of the virus and will continue to make adjustments" to protocols.

"Every day things change, and you just go with the flow," 66-year-old Dallas Coach Rick Bowness said. "If there's no glass behind the bench, there's no fans back there, so it's not going to affect anything. It shouldn't at all."

The 31 teams were also told to space out locker rooms more to provide 6 feet of space between people. The league announced an updated protocol Thursday and said it was also considering portable air filters that would be installed by the benches.

The league is not yet considering adding a daily rapid test to go along with PCR testing, like the NBA did. PCR tests are considered to be more accurate, but there's a 12-24 hour turnaround on results.

The moves were made as the NHL sees some concerning trends, including 40 players on the covid-19 unavailable list.

In the first three weeks of the season, almost 100 players have appeared on the list, which can include a positive test result unconfirmed or confirmed, symptomatic isolation, high risk close contact or quarantine for travel purposes. Bettman said fewer than half the players in protocol have been because of a confirmed positive test and many of those were asymptomatic.

"The way I'm looking at it is it's hard to avoid anywhere, so we're doing the best we can," said Carolina Coach Rod Brind'Amour, whose team has had four games postponed because of an outbreak. "It's still hard to avoid. Do we feel safe? I think the good news from our standpoint is the guys that have come in contact with it, they've all recovered and really had no symptoms."

Vegas, New Jersey, Buffalo and Minnesota are currently paused with at least one player on the list. The Wild added another player to the list Thursday to get up to seven total and the Sabres said 61-year-old Coach Ralph Krueger had tested positive and will enter virus protocol immediately. Vegas had three coaches in the protocol last week.

"The league is reacting to what's happening right now, and it's normal," Pittsburgh defenseman Kris Letang said. "They're trying to find ways to make it safer and to just act and try and find ways that we can still get our stuff done but in different ways."

So far, 22 games have been postponed affecting 16 of the league's 24 U.S.-based teams. Only one of the 40 players currently on the covid list is from a Canadian team, and that is because Pierre-Luc Dubois is in quarantine after a trade from Columbus to Winnipeg.

The Jets' union representative, Andrew Copp, said he understands some of the changes but is particularly unhappy with later arrivals on game day, which he believes will be challenged in the name of preventing injuries.

"It's getting your mind right, it's getting your body right to put out the best possible product for the fans and trying to lower injury as much as possible," Copp said. "This is pretty much the only place we're allowed to come. ... I don't see what the difference is between a 5:15 and 4:15 entrance for guys."

Players, coaches and staff are also limited to the hotel and rink on the road.

"I think the protocols are appropriate," Philadelphia General Manager Chuck Fletcher said Tuesday. "You can do everything right and still contract covid. I think we're all trying to be careful. I think the players recognize how fortunate we are to be back playing games, competing for a Stanley Cup and earning a paycheck." 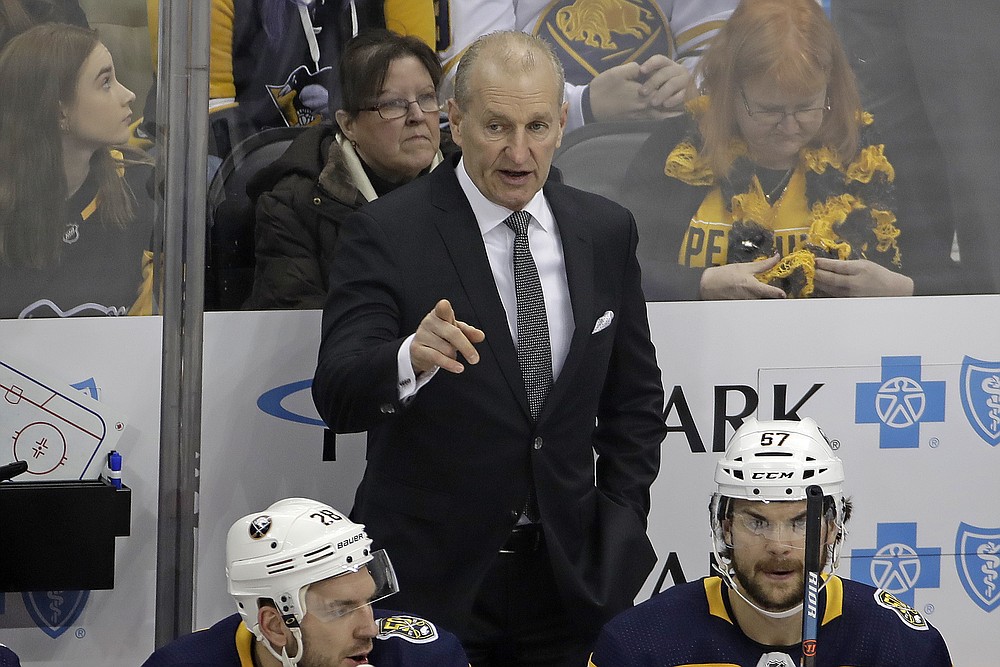 FILE - Buffalo Sabres' head coach Ralph Krueger stands behind his bench during the first period of the team's NHL hockey game against the Pittsburgh Penguins in Pittsburgh, in this Saturday, Feb. 22, 2020, file photo. Sabres coach Krueger prefers viewing the start of the 2021 shortened season as a continuation of the last one. If that's the case, the new-look Sabres, with the addition of Taylor Hall and Eric Staal, have plenty of unfinished business in attempting to snap a nine-year playoff drought, the NHL's longest active streak.(AP Photo/Gene J. Puskar, File) 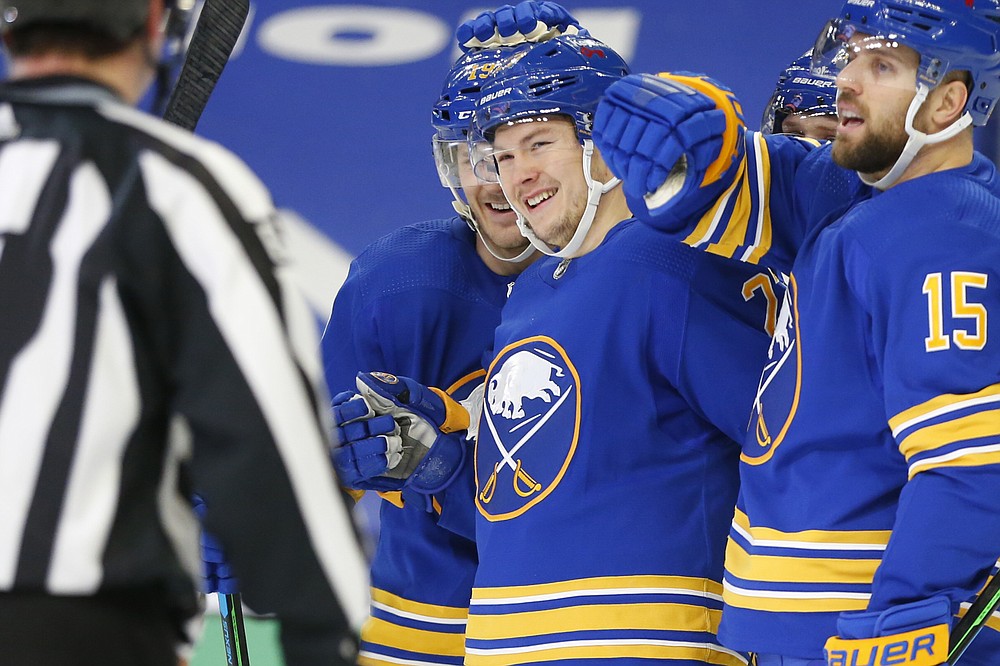