Schedule on mind of Pittman 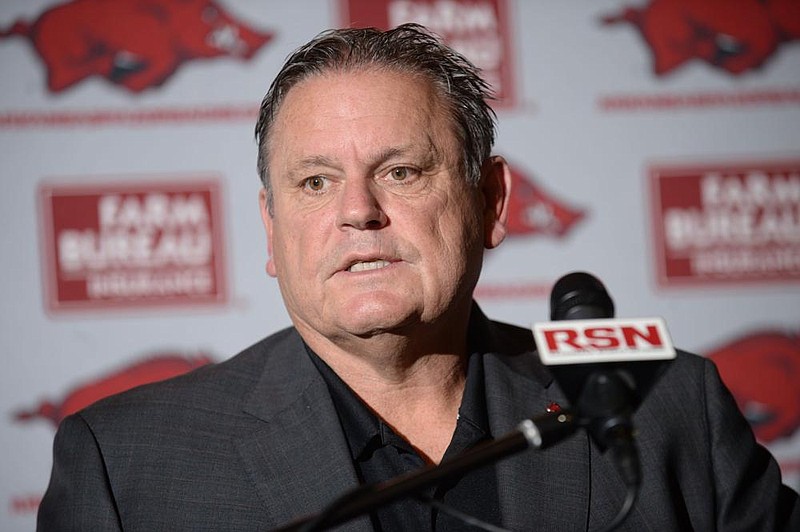 Arkansas coach Sam Pittman speaks Wednesday, Feb. 5, 2020, about the Razorbacks' signees with members of the media inside the Fred W. Smith Football Center on the university campus in Fayetteville. (NWA Democrat-Gazette/Andy Shupe)

He'd like to be in his current position when the Razorbacks make history by playing Arkansas State University in Little Rock on Sept. 6, 2025.

"Arkansas State, we're excited to have them scheduled," Pittman said on the conference to introduce new assistant coaches Jermial Ashley, Kenny Guiton, Cody Kennedy and Michael Scherer. "I want to be the coach at Arkansas when we go down there. I don't want to answer a whole lot of questions if I'm not the coach, we'll let the next guy do it. But I want to be the coach, and that's the plan."

If Pittman's program continues to show the improvement it did in 2020, he should be in prime position to lead the Razorbacks into their first game against the Red Wolves, which was revealed in an announcement on Wednesday.

Arkansas went 3-7 in Pittman's first year against an All-SEC schedule, and lost three other swing games that went down to the wire, including a 30-28 setback at No. 13 Auburn in which an improper officiating decision swung the outcome in the final seconds.

Pittman, who has recruiting on his mind 24/7, was a key figure in the ASU game coming to fruition in a kind of roundabout way.

It was Pittman's postseason discussion with Arkansas Athletic Director Hunter Yurachek about having as many conference games as possible on campus, to aid in recruiting, that started the ball rolling.

UA and state officials who oversee War Memorial Stadium agreed to relinquish scheduled games against Missouri in Little Rock this year and in 2023 while landing intrastate games against Arkansas-Pine Bluff this fall and in 2024, a season-opening game against Western Carolina in 2023, and the landmark ASU game.

"Obviously I want to play as many SEC games here as we can," Pittman said. "A big part of that is for recruiting, so we can get recruits in here. We play Missouri the last game of the year, we certainly wanted the opportunity to see the kids before we go out on the road recruiting."

The NCAA does not allow the Razorbacks to entertain recruits during games at War Memorial Stadium.

Pittman thought having a home game against Missouri in the season finale on the Thanksgiving weekend just before hitting the recruiting road was too big an event to let pass.

"I felt like we would lose a huge opportunity, and that's basically it," Pittman said.

Pittman also was asked what he thought of playing future games in Little Rock beyond the four games scheduled there the next five years.

"I'm going to kind of defer all that to Hunter," Pittman said. "Certainly we know that we have Pine Bluff, Western Carolina and A-State over there in the next three to five years.

"We'll see how it goes. I'm not the know-all of whether we should play five games over there or one game, all that stuff. I'm just a football coach.

"I just knew that going over there and playing an SEC school, I felt like it would hurt our recruiting because we couldn't see the players. I'm all for whatever the state and Hunter decides to do in the future of Little Rock."

Kickoff times to be announced