Prince of the Torah

Rabbi is Israel’s spiritual leader of ultra-Orthodox Jews, but to some he is the king of covid by PATRICK KINGSLEY THE NEW YORK TIMES | February 6, 2021 at 3:49 a.m. 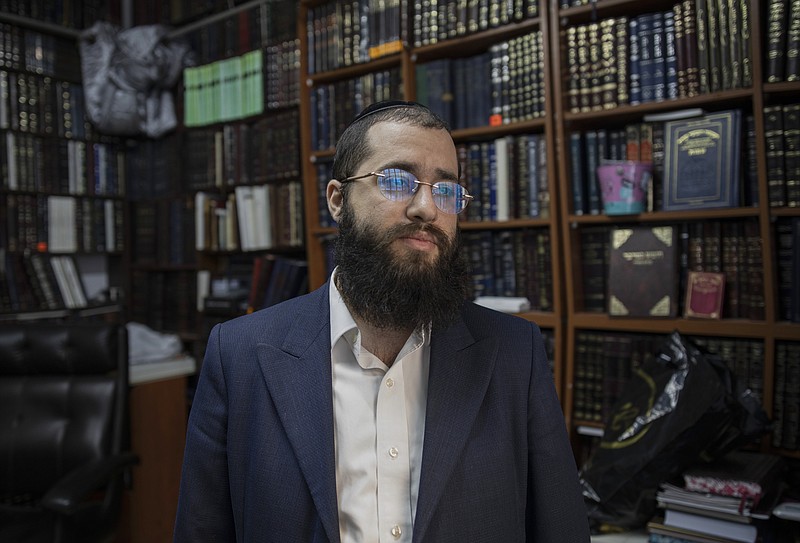 Rabbi Chaim Kanievsky’s grandson Yaakov Kanievsky, whose dominant role in the life of his influential grandfather has led to questions, at the Rabbi’s home in Bnei Brak, Israel, Jan. 24, 2021. Kanievsky denies that he exercises any undue influence over his grandfather’s pronouncements. (Dan Balilty/The New York Times)

BNEI BRAK, Israel -- Rabbi Chaim Kanievsky, 93, can't use a phone. He rarely leaves his house. His family says he has never been successful in making a cup of tea. His closest aides think he doesn't know the name of Israel's prime minister. He studies the Torah for, give or take, 17 hours a day.

Yet despite his seeming detachment from worldly life, Kanievsky has become one of the most consequential and controversial people in Israel today.

The spiritual leader of hundreds of thousands of ultra-Orthodox Jews, Kanievsky has landed at the center of tensions over the coronavirus between the Israeli mainstream and its growing ultra-Orthodox minority.

Throughout the pandemic, authorities have clashed with the ultra-Orthodox over their resistance to anti-virus protocols, particularly their early refusal to close schools or limit crowds at religious events. Similar conflicts have played out in the New York area.

RABBI AT THE FORE

Kanievsky, issuing pronouncements from a book-filled study in his cramped apartment in an ultra-Orthodox suburb of Tel Aviv, has often been at the fore of that resistance. Twice, during the first and second waves of the pandemic in Israel, he rejected state-imposed anti-virus protocols and would not order his followers to close their yeshivas, independent religious schools where students gather in close quarters to study Jewish scripture.

"God forbid!" he exclaimed. If anything, he said, the pandemic made prayer and study even more essential.

Both times he eventually relented, and it is unlikely that he played as big a role in spreading the virus as he was accused of, but the damage was done.

Many public health experts say that the ultra-Orthodox -- who account for about 12% of the population but 28% of the coronavirus infections, according to Israeli government statistics -- have undermined the national effort against the coronavirus.

REACTION HAS BEEN FIERCE

The reaction has been fierce, much of it centered on Kanievsky.

The rabbi "must be arrested for spreading a disease," blared a column last week in Haaretz, a liberal newspaper. "This rabbi dictates the scandalous conduct in the ultra-Orthodox sector," said an article in Yedioth Ahronoth, a centrist news outlet.

The backlash exaggerates the rabbi's role and that of the ultra-Orthodox in general. Ultra-Orthodox society is not monolithic, and other prominent leaders were far quicker to comply with anti-virus regulations. Ultra-Orthodox leaders say the majority of their followers have obeyed the rules although their typically large families, living in tight quarters under what is now the third national lockdown, have inevitably contributed to the spread of the contagion.

Born in what is now Belarus in 1928, Kanievsky immigrated to what was then Palestine before World War II. He has spent most of his subsequent waking life studying Jewish texts, gradually building a following among the so-called Lithuanian Jews, a non-Hasidic sect of ultra-Orthodox Jews with eastern European roots who form roughly a third of the Haredim in Israel.

When the sect's previous leader died in 2017, Kanievsky was one of two senior rabbis who filled the vacuum, which gave him considerable authority over the sect as well as an ultra-Orthodox political party that now forms part of the government.

His pedigree adds to his prestige: his father and uncle were legendary spiritual leaders. But it is his relentless Torah study that gives the rabbi his authority -- his followers believe his encyclopedic knowledge of Jewish teachings endows him with a near-mystical ability to offer religious guidance.

"They see him as a holy man," said Eli Paley, chairman of the Haredi Institute for Public Affairs, a Jerusalem research group. "They see their existence as relying on Rabbi Chaim and his Torah learning."

On a recent afternoon in his apartment in the ultra-Orthodox enclave of Bnei Brak, Kanievsky appeared oblivious to the controversy raging around him. He sat silently at a small wooden table covered in a silvery tablecloth, surrounded by religious books. His wrinkled and reddened hands gripped a white book of scripture. Since rising before dawn, he had been studying the Chullin, a rabbinical text on the laws of ritual slaughter, and would continue to study late into the night.

"He believes the Torah sustains the world," said Yaakov Kanievsky, his 31-year-old grandson and the rabbi's main mediator with the outside world. "Without Torah learning, we don't have any reason to live. It's written in the Bible -- if you stop learning, the world will collapse."

For a few hours each day, Rabbi Kanievsky stops studying to take questions from his followers, who either put their requests in writing or pose them in person during visiting hours. Since the rabbi is hard of hearing, the questions are relayed by his grandsons, who shout them in the rabbi's ear and, when necessary, contextualize the questions and clarify their grandfather's terse, mumbled answers.

A few such exchanges at the start of the pandemic quickly gained national notoriety.

"There is now a great epidemic in the world, a disease called corona, and it affects many people," one grandson shouted in the rabbi's ear last year, after a question from a visitor, according to a video of the conversation. "He asks what they should take upon themselves so this disease does not get to them and there are no problems."

"They should learn Talmud," the rabbi whispered in response.

"The question is," Yaakov asked his grandfather on a separate occasion, "if grandfather thinks that they should close the schools because of this?"

In an interview, Yaakov Kanievsky, better known as Yanki, said that these brief clips don't tell the whole story. The rabbi, he said, has long complied with government policy.

"There are things that get misunderstood," Yanki Kanievsky said. "He takes [covid-19] very seriously, and he takes the patients very seriously."

Several weeks into the pandemic, the rabbi ordered his followers to obey social-distancing guidelines, even equating scofflaws to murderers. In June, he said masks were a religious obligation. In December, he gave his blessing to the vaccine, not long after recovering from the virus himself. In recent days he condemned a group of Haredi young people who clashed with police officers trying to enforce coronavirus regulations.

And he ultimately reversed himself on closing the yeshivas, which remain closed or under quarantine during the current lockdown.

"If you look at the news tonight, there will be one Haredi school open, and people will say, 'Oh, it's all Rabbi Kanievsky's fault,' " Yanki Kanievsky said. "But it's really not."

Yanki Kanievsky's dominant role in his grandfather's life has led to questions about who is really in charge, and whether Rabbi Kanievsky is alert enough to judge matters of national importance. Critics say the grandson controls who can and can't reach the grandfather -- even Prime Minister Benjamin Netanyahu has not been granted the privilege of speaking with Rabbi Kanievsky directly.

The younger Kanievsky said that his grandfather is entirely his own man and that it would be impossible to influence him even if he tried. Everyone has the right to ask him anything -- they just have to line up and wait their turn.

"I can't tell the rabbi what to say," Yanki Kanievsky said. "If he thinks I'm trying to manipulate him, I am finished."

But without speaking to the rabbi directly, it is hard to know exactly what he thinks. As the interview with Yanki Kanievsky drew to close, we asked for a final audience with the rabbi. 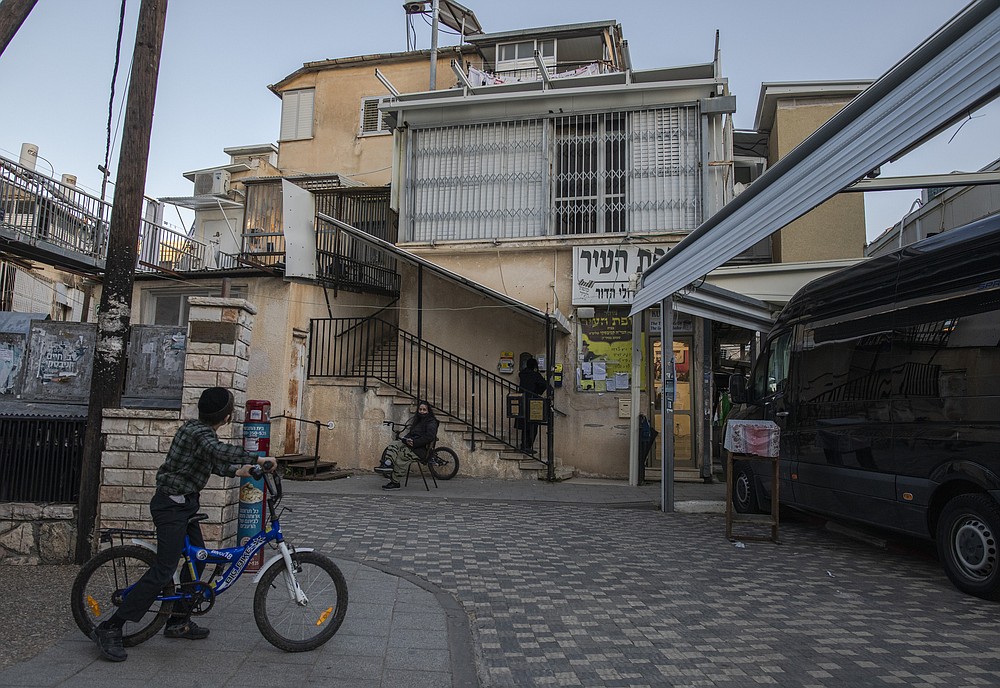 The home of Rabbi Chaim Kanievsky, whose pronouncements have made him one of the most controversial figures in Israel today, in Bnei Brak, Israel, Jan. 24, 2021. Kanievsky is the spiritual authority for hundreds of thousands of ultra-Orthodox Jews, but his pronouncements on the coronavirus have made him a villain to many. (Dan Balilty/The New York Times) 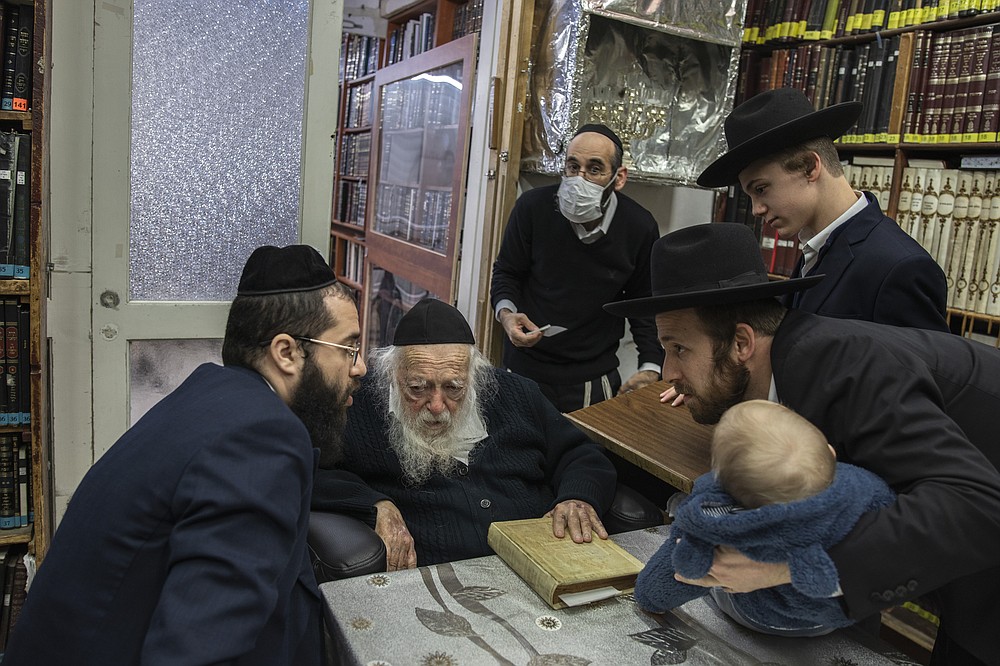 Yaakov Kanievsky, left, listens to a family’s request for a blessing before repeating it to his grandfather, Rabbi Chaim Kanievsky, at his home in Bnei Brak, Israel, Jan. 24, 2021. Rabbi Kanievsky is the spiritual authority for hundreds of thousands of ultra-Orthodox Jews, but his pronouncements on the coronavirus have made him a villain to many. (Dan Balilty/The New York Times) 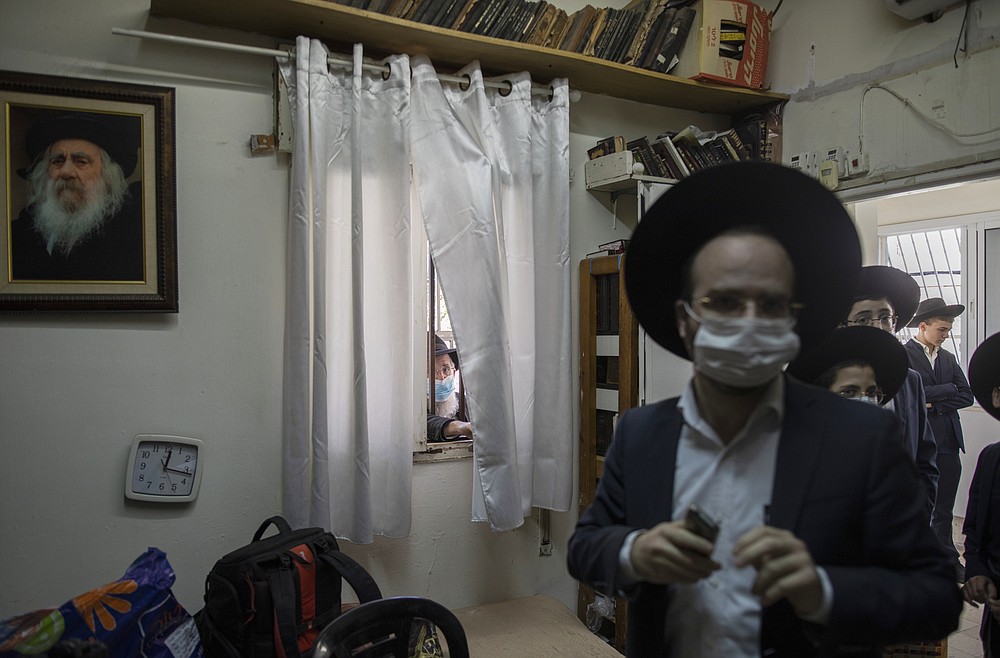 Followers of Rabbi Chaim Kanievsky line up at his home to receive a blessing or to ask questions, which he answers for a few hours a day, in Bnei Brak, Israel, Jan. 24, 2021. Kanievsky is the spiritual authority for hundreds of thousands of ultra-Orthodox Jews, but his pronouncements on the coronavirus have made him a villain to many. (Dan Balilty/The New York Times) 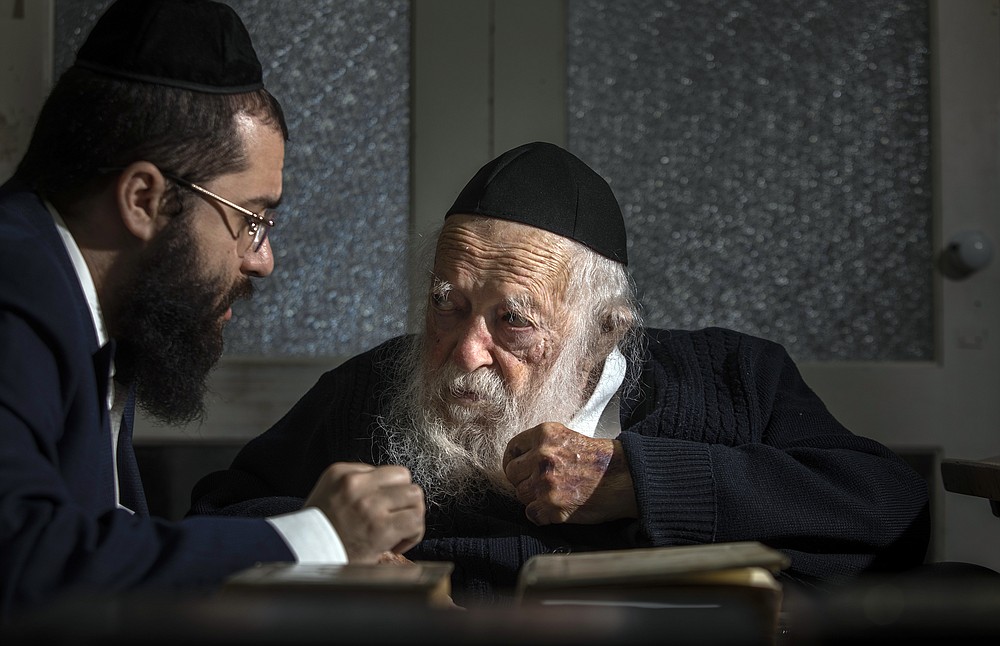 Rabbi Chaim Kanievsky, center, whose pronouncements have made him one of the most controversial figures in Israel today, with his grandson Yaakov Kanievsky, at the rabbi's home in Bnei Brak, Israel, Jan. 24, 2021. Kanievsky is the spiritual authority for hundreds of thousands of ultra-Orthodox Jews, but his pronouncements on the coronavirus have made him a villain to many. (Dan Balilty/The New York Times) 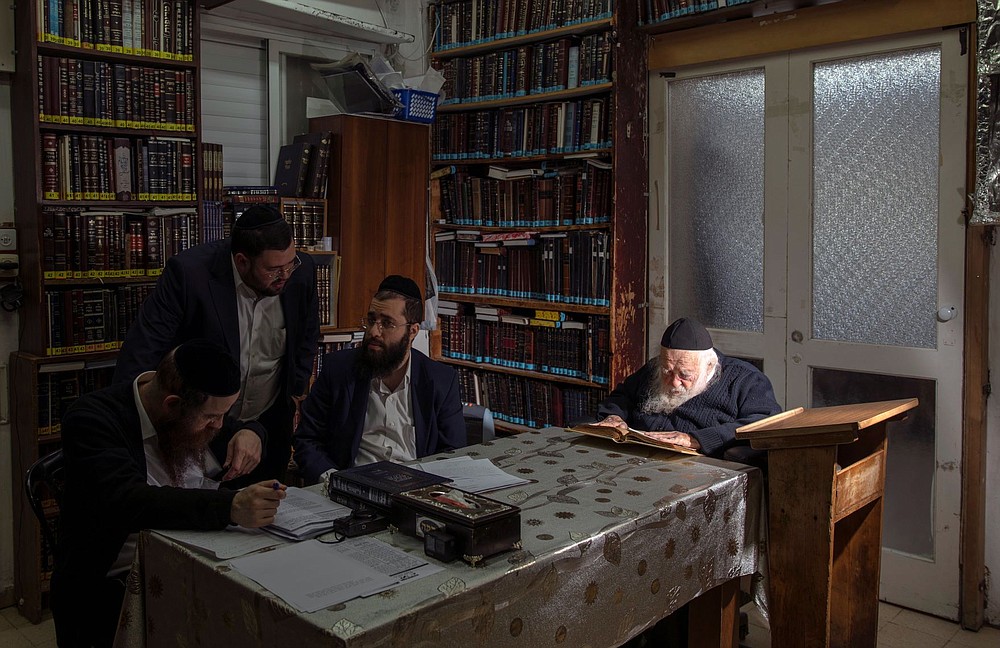