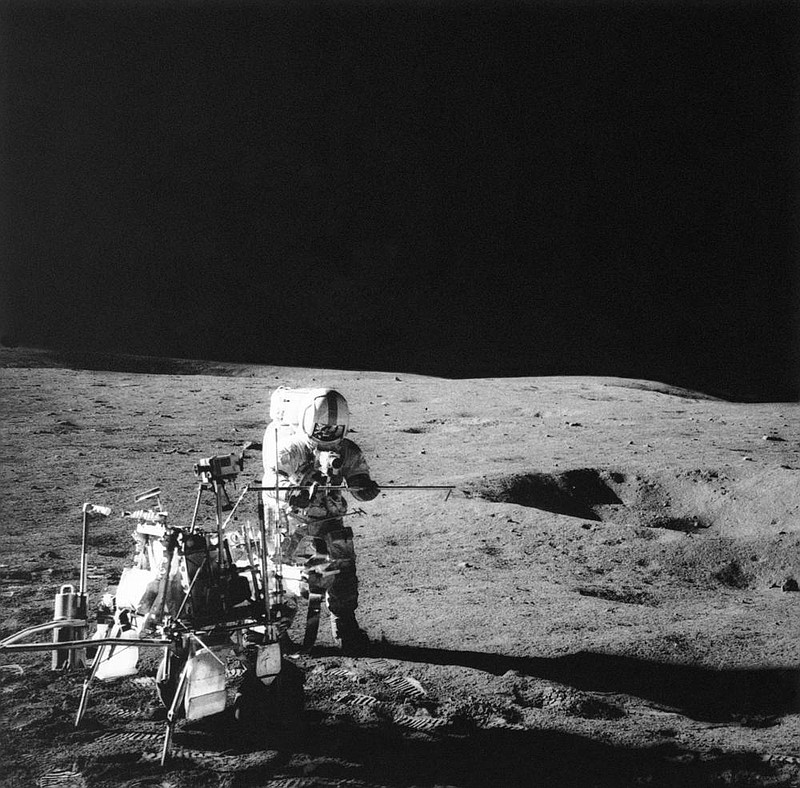 Fifty years later, it remains the most impressive bunker shot in the history of golf, mainly because of the location.

Apollo 14 commander Alan Shepard and his crew brought back about 90 pounds of moon rocks on Feb. 6, 1971. Left behind were two golf balls that Shepard, who later described the moon's surface as "one big sand trap," hit with a makeshift 6-iron to become a footnote in history.

Francis Ouimet put golf on the front page of American newspapers by winning the 1913 U.S. Open. Gene Sarazen put the Masters on the map by holing a 235-yard shot for an albatross in the final round of his 1935 victory.

Shepard outdid them all. He put golf in outer space.

"He might have put golf on the moon map," Jack Nicklaus said this week. "I thought it was unique for the game of golf that Shepard thought so much about the game that he would take a golf club to the moon and hit a shot."

Shepard became the first American in space in 1961 as one of NASA's seven original Mercury astronauts. After being sidelined for years by an inner ear problem, he became the fifth astronaut to walk on the moon as Apollo 14 commander.

Shepard waited until the end of the mission before he surprised American viewers and all but a few at NASA who did not know what Shepard had up his sleeve -- or in this case, up his socks. That's how he got the golf gear in space.

"Houston, you might recognize what I have in my hand as the contingency sample return; it just so happens to have a genuine 6-iron on the bottom of it," Shepard said. "In my left hand, I have a little white pellet that's familiar to millions of Americans."

He hit more moon than ball on his first two attempts. The third he later referred to as a shank. He caught the last one flush, or as flush as an astronaut can hit a golf ball while swinging with one hand in a pressurized spacesuit that weighs 180 pounds (on Earth).

"We used to say it was the longest shot in the history of the world because it hasn't come down yet," famed golf instructor Butch Harmon said with a laugh.

Harmon is loosely connected with the shot through his relationship with Jack Harden Sr., the former head pro at River Oaks Country Club in Houston whom Shepard asked to build him a 6-iron he could take to the moon. Harden managed to attach the head of a Wilson Staff Dyna-Power 6-iron to a collapsible tool used to collect lunar samples.

The shots did come down on the moon. Still up for debate is how far they went.

"Miles and miles and miles," Shepard said in a light moment that was broadcast in color to a captive television audience watching from nearly 240,000 miles away.

Not quite. The shot for years has been estimated at 200 yards, remarkable considering how much the bulk of his spacesuit restricted Shepard's movement. He had even practiced in his spacesuit in a bunker in Houston when no one was around.

What stands out all these years later is Shepard even thinking about taking a golf club to the moon and back. The inspiration came from Bob Hope, who carried a golf club just about everywhere he went. That included a trip to Manned Spacecraft Center in Houston a year before the Apollo 14 mission.

According to USGA historian Michael Trostel, that's what made Shepard realize a golf shot would be the ideal illustration of the moon's gravitational pull. To build a club, he found the right person in Harden at River Oaks.

"He was an incessant tinkerer with equipment," said Brandel Chamblee, a Golf Channel analyst and longtime friend of Harden's son. "I would tease Jack and his father, any club they got had been 'Hardenized.' No club off the rack was ever good enough for them. They always changed the lie, the loft, the bounce. They used lead tape. It was apropos he made Shepard's 6-iron."

The actual club is one of the prize exhibits at the USGA Museum in New Jersey, which came with one awkward moment.

For years, no one knew what golf balls he used and Shepard was determined to avoid any commercialism. Chamblee and Harmon unlocked the mystery this week, and it came with a twist.

They were range balls from River Oaks.

"Within the Hardens, the legacy is he gave him golf balls from the range that had 'Property of Jack Harden' on them," Chamblee said. "Technically -- if the balls aren't melted -- Jack is the only person who owns property on the moon."