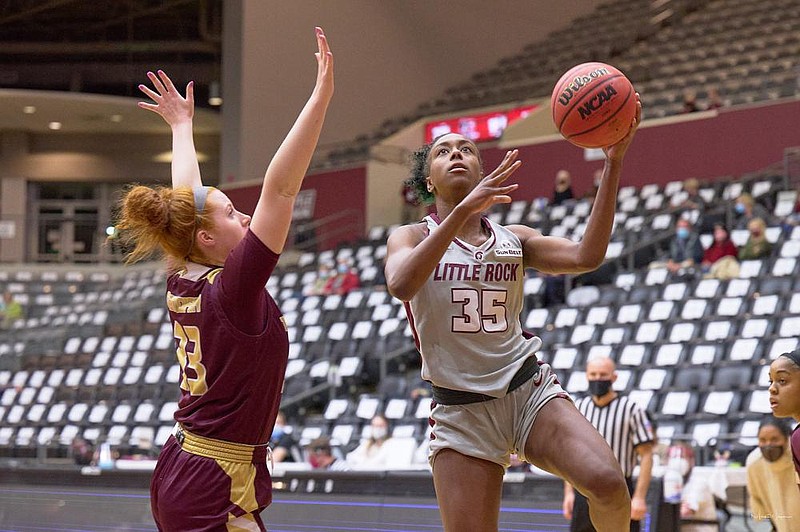 UALR’s Teal Battle (right) goes up for a shot Friday while being defended by Texas State’s Gabby Standifer during the Trojans’ 62-51 victory over the Bobcats at the Jack Stephens Center in Little Rock. Battle led the Trojans with 20 points. (Photo courtesy UALR Athletics)

Teal Battle scored eight of the Trojans' first 10 points -- then nine consecutive to open the second half -- to carry the University of Arkansas at Little Rock women's basketball team to a 62-51 victory over Texas State at the Jack Stephens Center on Friday.

The senior finished with 20 points -- one shy of matching her season-high -- and added five assists, leading a turnaround offensive performance in which the Trojans shot 45.3% from the field after a season-low scoring effort in Tuesday's 51-44 loss at Texas State.

"[Teal] did a good job of driving the ball, passing the ball from the high post," UALR Coach Joe Foley said. "That high post move is the catalyst. She had to make a lot of decisions out there, and she made pretty good decisions tonight."

Senior Krystan Vornes scored 13 points to go along with 13 rebounds as the Trojans won the battle on the glass 39-22 and bullied Texas State for 42 points in the paint.

Junior Mayra Caicedo scored nine points and dished out six assists for UALR. Sophomore Alayzha Knapp went 3 of 4 from the field to finish with 8 points.

Da'Nasia Hood, the Sun Belt's leading scorer (17.3 ppg), paced the Bobcats with 12 points, but she was largely held in check on 5-of-11 shooting.

The teams meet for their third game of the week at 4 p.m. today at the Jack Stephens Center.

Foley's response to Tuesday's loss was to attack inside against the Texas State zone, and the Trojans made a lineup change to do so. Freshman Tia Harvey recorded four points and 13 rebounds in her first conference start. She also created space for UALR's forwards in the paint, where the Trojans converted 59.2% of their shots.

The switch put the offense in Battle's hands, and the senior took advantage from the post.

"It put me closer to the goal so I'm able to drive a bit quicker and better," Battle said. "Playing outside more, they know that I'm a driver, so they closed the paint up for me, but having Tia out there as an extra guard, putting me back in the post helps a lot with our offense."

Battle assisted Vornes for the opening points of the game, then rattled off eigth in a row to give UALR a 10-6 lead on a contested finish at the basket. Hood responded with seven consecutive points of her own, and Texas State held a short-lived advantage before Caicedo's baseline floater put the Trojans ahead 15-14 in the closing seconds of the first quarter.

Texas State led 23-21 on Kennedy Taylor's three-pointer with 4:52 remaining in the first half before UALR returned to the paint, where Vornes scored six points over the final 4:41 and sent the Trojans to the locker room ahead 28-23.

With the score 28-25 early in the second half, Battle hit two layups and followed them with a three-point play. Her jumper on the next possession moved the Trojans' advantage to 10.

Battle scored nine points in the first 3:27 of the half.

"Today I think we came in with a game plan to get it inside, so when I couldn't score somehow, then the high low was there or we could kick it out," Battle said. "Basically, our whole game was from the inside out."