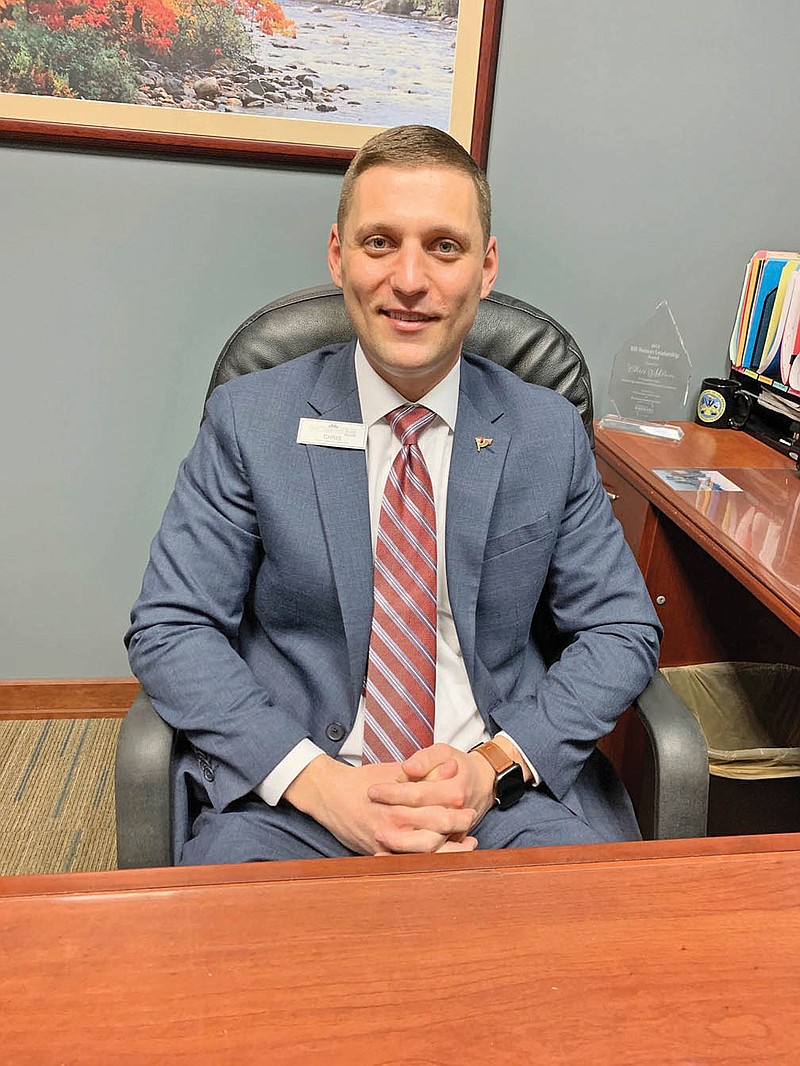 Chris Milum of Batesville is the recipient of the 2020 Bill Holmes Leadership Award in recognition of outstanding leadership and community involvement, presented by The Emerging Leaders Section of the Arkansas Bankers Association. He was also selected as the Army National Guard’s Company Grade Officer of the Year presented by the National Guard Association of Arkansas.

Growing up, Chris Milum of Batesville always wanted to fly airplanes. In fact, more than once, he told his mother he was going to join the Air Force, and she would always respond with, “You need a college degree to fly airplanes.”

But Milum didn’t like school, and around age 11 or 12, he was diagnosed with dyslexia.

“I loved all my teachers, but school wasn’t something I enjoyed at the time. The older I’ve gotten, the more I’ve enjoyed learning, but being a young boy, I didn’t really care,” Milum said.

By college, things were different, and he went on to earn multiple degrees and have a successful career at First Community Bank in Batesville, where he serves as vice president of commercial lending.

“Chris is a rising star in our institution, and he contributes to our success,” Dover said. “His leadership has enabled the bank to meet the needs of our customers and the communities where we operate. Chris’ dedication to his profession, country and community can be seen through his work and work ethic.”

Throughout elementary and high school, Milum said, his dyslexia caused him to struggle, but even from an early age, he knew he had an aptitude for numbers and math.

“I’ve always liked that [math is] cut and dried. There’s black and white — two plus two is always four, no matter what. I like the fact that if you do the steps in the proper order, you always get the correct answer,” he said.

After graduating from Batesville High School in 2006, Milum went to Arkansas State University in Jonesboro and earned a Bachelor of Arts degree in business management in 2010 and, while in college, interned at First Community Bank for a couple of summers.

“What got me into the banking side of it was not only did I get to do the math side of the house, but I’m also very passionate about helping others,” Milum said. “I figured banking would bridge both of these by helping someone start the business of their dreams or buy their first home.”

Milum said he wanted to go to work at First Community Bank partly because his grandfather George Rider helped establish the bank, but that wasn’t the only reason Milum got into banking.

“I also like how involved the community banks are in the community,” he said, noting that when he was a kid, he always saw the banks doing things such as sponsoring his sports teams, giving money to local causes and promoting community events.

When Milum and his wife, Kaylea, who is a pediatric physical therapist at Stars Academy, moved back to Batesville, Milum talked with Dover about coming back to the bank. In September 2015, Milum went to work at First Community, and in December 2019, he completed his Master of Arts degree in management and leadership from Webster University.

In the meantime, he had put his dream of being in the military and flying airplanes on hold — that is, until he saw a college friend who said he had joined the National Guard.

“That started the wheels,” Milum said. “I was going back and forth to Memphis to my traveling sales job, and I was crossing the Memphis bridge and thought, ‘If I died today, what would be my regrets?’”

What he kept coming back to was the fact that he had not joined the military.

“The very next day, I joined [the National Guard],” he said.

Milum said he was around 25 or 26 years old and that he was one of the oldest guardsmen in basic training, but he felt honored to be there and to give back to his community.

Milum has now served eight years in the Arkansas Army National Guard, holds the rank of captain and is currently the commander of the 224th Support Maintenance Company in Mountain Home. He was recently selected as the Army National Guard’s Company Grade Officer of the Year by the National Guard Association of Arkansas.

“I later found out that I won the federal version of this award, the Theodore Roosevelt Leadership Award for Company Grade Officers. Both of these awards were presented for my time as a guardsman, but also for my leadership in the community,” Milum said.

Milum was also recently nominated for the Gen. Douglas MacArthur Leadership Award, which recognizes officers in the Army, Reserve and National Guard who have displayed the ideals that MacArthur once stood for: duty, honor and country, according to information from the U.S. Army.

Milum said he has enjoyed every minute of his time in the National Guard and feels fortunate to have an employer who allows him to take time off for guard training.

“I can’t thank my employers enough for how supportive they’ve been,” Milum said. “Every time I put on the uniform, I feel great pride.”

Both of his grandfathers served in World War II, “so I feel like they’d be pretty proud [of my service to my country], he said.

Milum continues to serve his community with terms on the Batesville School Board, the Batesville Area Chamber of Commerce Board and the Eagle Mountain Properties Association Board, and he is treasurer for state Rep. Stu Smith (R-Batesville). Milum previously served on the Main Street Batesville Board as economic vitality chairman, as president for the Fast ForwARd Fund’s Committee for ForwARd Arkansas, and on the city Planning and Zoning Commission.

Milum and Kaylea have two children, Olivia, 5, and Luke, 3.

“Ever since I had kids, that’s really driven me to serve not only my community but also my country. Once we have kids, it seems we start living for them rather than for us, but I wanted to leave a better community and country for them. In my opinion, I picked the best two occupations to do that,” Milum said.

2020 was a rough year for Milum, healthwise, as he had two tonsil surgeries and contracted COVID-19, but on the flip side, the year brought about recognition for his career and military service.

“It’s been the most ups and downs I’ve ever had,” he said.

The world changed in 2020 with COVID-19, and banking was no exception. Congress approved an aid package that included the Paycheck Protection Program to help businesses. First Community leaders asked Milum to help lead a team for all 27 branches across two states that “was not only going to help the businesses in our communities, but also help the workers stay employed and put food on the table,” Milum said.

“Being put in charge of a historic program for the bank was a huge undertaking,” he said. “After assembling a team of more than 30 individuals, we were able to help over 900 businesses, totaling over $70 million. This also helped give 10,234 employees a paycheck during this unprecedented time. This took countless hours of work from many great people. One night, I remember leaving the bank at around 12:30 in the morning from submitting PPP applications to the SBA.”

Milum said he’d had no idea that Dover had nominated him for the Bill Holmes Leadership Award and was shocked to learn the news.

“I know a lot of people in the banking community thought a lot of Mr. Holmes, so to receive an award in his honor was mind-blowing,” Milum said.

While Milum has yet to attain his pilot’s license, he said he started training on an old simulator his grandpa had.

“Then I flew co-pilot on many flights with my grandmother Sue [Rider],” Milum said. “I also used a Microsoft flight simulator.

“I never started the formal process because I got busy with baseball and racing as a kid.”

Milum said that what might be even better than him getting his pilot’s license would be for one of his kids to become a pilot and take him up for flights.

“That would be awesome!” Milum said.