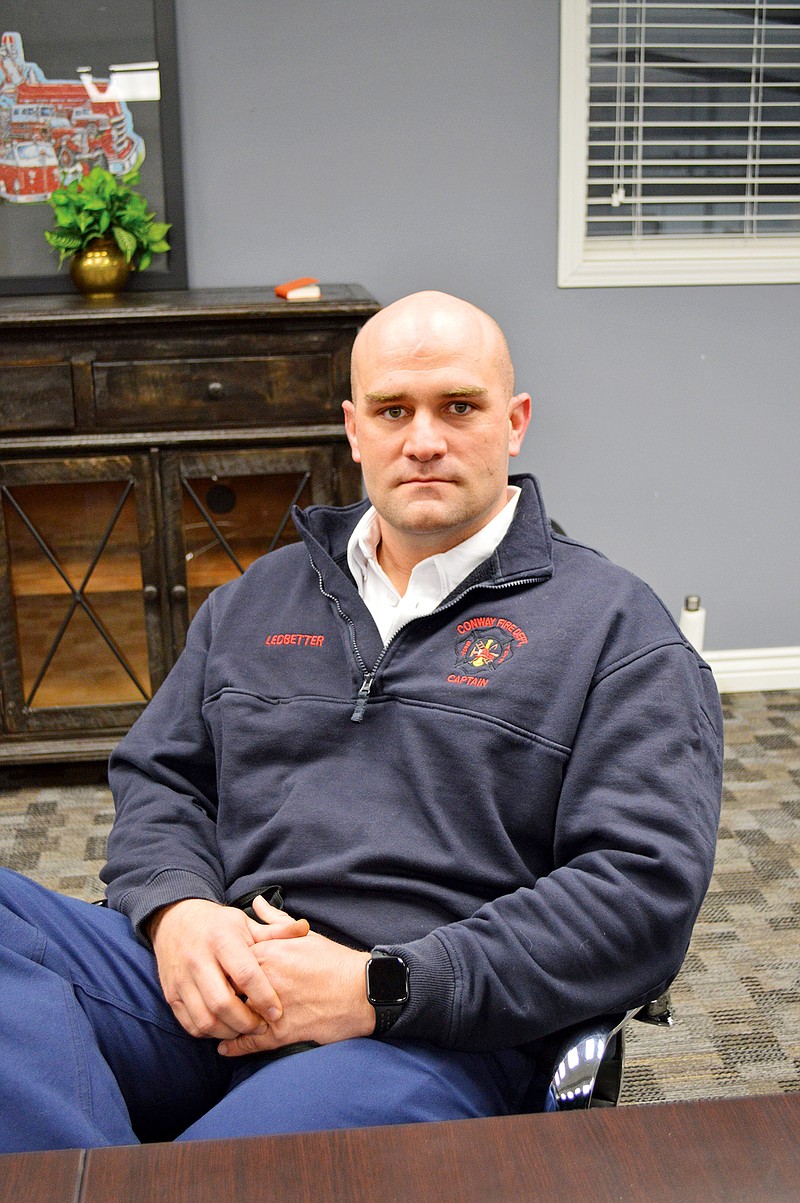 Capt. Ty Ledbetter of the Conway Fire Department started a fundraiser to install a Safe Haven Baby Boxes unit in a station to allow a parent to anonymously surrender an infant. Ledbetter, a father of four, said the idea has been on his heart for years as he’s read about babies abandoned in unsafe places. Donations to assist the project may be made on his Facebook page.

Capt. Ty Ledbetter of the Conway Fire Department launched an online fundraiser to install a Safe Haven Baby Boxes unit at one of the city’s fire stations after years of hearing stories of mothers abandoning newborns.

“You see people, all across the country, where they find these abandoned babies in a parking lot,” Ledbetter said. “It’s always been kind of a vision of mine to get one of these boxes here. We knew [the Fire Department] was a safe-haven drop spot, but how often does the public know that?”

The Safe Haven Law was enacted in 2001 in Arkansas, allowing mothers to anonymously and legally surrender a baby 30 days old or younger at any hospital emergency room or law-enforcement agency. The law was amended in 2019 to include manned fire stations.

“That’s great in theory, and it happens, but a lot of these mothers, whether it be shame or whatever, they don’t want to do that — hand that baby face to face to somebody,” Ledbetter said.

Safe Haven Baby Boxes’ stated mission is to prevent illegal abandonment of newborns. The organization, based in Indiana, offers a 24-hour hotline for mothers in crisis: (866) 99BABY1.

The box is a “medical bassinet,” according to signage on the receptacles. The box is accessed by an opening on the exterior of a building, and the door locks after the baby is placed in the bassinet inside the building.

“This is not a cargo box,” Ledbetter said. “It’s climate-controlled, alarmed, so that any time the door shuts on that box, a silent alarm goes off inside the fire station, and it goes to 911 dispatch.”

If the firefighters are out of the station on a call, “dispatch will notify other people in the department, myself included, to get somebody down there as fast as possible. We will follow protocols to ensure the safety and health of the baby,” Ledbetter said.

An ambulance will take the baby to a hospital emergency room, likely Conway Regional Medical Center, which is a safe-haven drop-off location, Ledbetter said. The baby will then be placed in the care of the Arkansas Department of Human Services.

DHS spokeswoman Amy Webb said that if a baby is surrendered to a fire-station baby box,” the fire department should provide a medical exam and treatment, if needed. DHS should be immediately notified, and our Division of Children and Family Services will immediately take custody and place the child in a foster home.”

Ledbetter, a father of four, said he and his wife, Amanda, have talked for years about the Safe Haven Baby Boxes program.

“She supports it 100 percent; she thinks it’s a wonderful idea,” he said.

Amanda Ledbetter is a nurse, and she worked for a few months in Little Rock as a postpartum nurse.

“Working at the hospital, I saw young mothers who really had no clue how to take care of their baby and did not have the support,” she said. “I was younger when I had my first baby, but I had a lot of support. I think having a place like that where they can go and not feel pressure or shame — I think that would be a great thing for our community.”

Any struggling mother who makes the difficult decision to surrender her baby at the Safe Haven Baby Boxes site could know “that was the right thing to do. I got my baby to someone who could care for it and love it and do things I wasn’t able to do,” Amanda Ledbetter said.

Louise Witcher, coordinator for Children of Arkansas Loved for a Lifetime in Faulkner and Conway counties, said the baby box is “an awesome, awesome idea.”

The CALL works to recruit, train and support foster families, typically through churches. Witcher said 1,200 people in Arkansas are on a waiting list for a child under the age of 2.

“[The baby box is] a very nonthreatening way for someone who wants to give up their child not to have charges brought against them and to leave the baby in a safe place, not on the side of the road or a doorstep,” Witcher said. “When I think about all the families out there who want a baby, … it’s meeting the needs on both ends.

“[There are] so many homes that would love a baby and the unselfish mother who gave it away. It’s going to help her life, and that newborn is going to have a chance to make it.”

Ty Ledbetter, who is a captain in the Fire Department’s Emergency Medical Services Division, said he talked to Conway Fire Chief Mike Winter last year about his goal to get a baby box, preferably at the Central Station in downtown Conway. It is the most populated fire station and the most visible, Winter said.

Winter said he was on board immediately because he had supported the legislative effort in 2019 to include manned fire stations in Safe Haven Baby Boxes locations.

“I supported this measure back before it went to the state Legislature, where they changed the laws where a fire station could be considered a safe haven for a baby,” Winter said, adding that he gave a written endorsement. “We still have some concerns: How’s it going to work … protocols, procedures? It’s a matter of instructing our personnel and getting them up to speed on how this works.”

A Safe Haven Baby Boxes representative will train firefighters on the program.

“The way [the baby box is] made, the way the alarms work, it’s perfect; it’s ideal,” Winter said.

He said he knows the grim alternative to a baby being safely surrendered.

“In our profession, we’ve had to respond to situations where there wasn’t a baby box, you know. Those are heart-wrenching — where somebody puts a baby in a dumpster,” he said.

Winter said he was a firefighter on duty 22 years ago when an infant was found in a dumpster in Conway. Ledbetter said he has not experienced that situation.

In 1993 in Faulkner County, a baby was abandoned in a couple’s garage. The infant was wrapped in a jacket, and a note was left asking the couple to love the baby.

The only Safe Haven Baby Boxes unit in Arkansas is in Benton at Fire Station No. 3. Fire Chief Bill Ford of the Benton Fire Department said the box was dedicated in September 2019, and a baby was surrendered in May 2020. A baby-box installation is underway in Jonesboro but is not yet operational, said Monica Kelsey, founder of Safe Haven Baby Boxes.

Ledbetter’s goal is to have the Conway box installed by spring. He said the location of the building for the box portal will be decided after consulting with the contractor and Safe Haven Baby Boxes.

“We have to put ourselves in the shoes of whoever is dropping off this baby,” he said. One possible location on the brick building faces a street. The other is more secluded, around the corner of the building in a parking lot.

Winter and Ledbetter emphasized that the baby box is being funded with donations.

“This is not coming out of the city budget. This is me taking the lead, not as a firefighter, but as a citizen,” Ledbetter said, adding that Hiegel Building Solutions will donate the installation cost for the unit. Donations may be made through a link on Ledbetter’s Facebook page. At press time, more than $7,700 had been raised toward the $15,000 goal.

“I really want this to be a community effort; we have such an amazing community,” Ledbetter said. “I know they’re going to stand behind this and support this. By making it a community effort, it’s raising awareness. This box — not only will it serve its purpose [for a mother] to be able to surrender a baby, but I think it also serves as a visual, a reminder to people: It is OK to surrender a baby safely and legally.

“We tend to look at things through rose-colored glasses, and this is such a great community, but we forget that there are still people struggling within,” Ledbetter said. “I hope nobody ever has to use [the baby box] … but living in the real world, there’s a good chance it’s going to get used.”