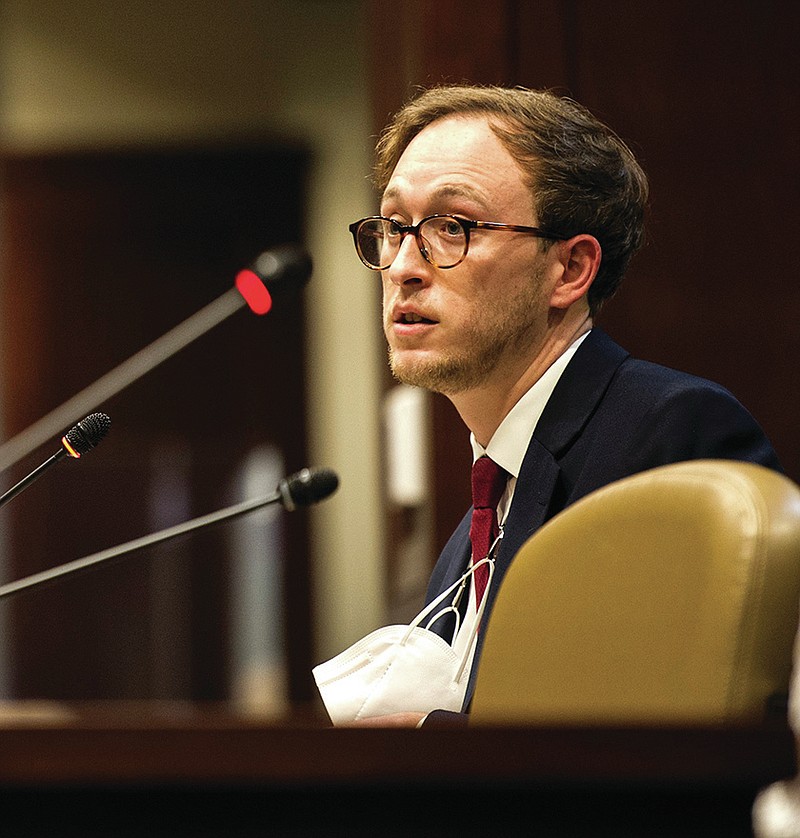 Michael Kaiser, a Defense Attorney, speaks to the House Judiciary Committee in opposition of a senate "stand your ground" bill that would remove the requirement to retreat before using deadly force in self defense on Tuesday, Feb. 2, 2021. (Arkansas Democrat-Gazette/Stephen Swofford)

Faced with intractable opposition from across the political spectrum, the sponsor of a bill to eliminate the "duty to retreat" from Arkansas' self-defense laws said last week that he will attempt to negotiate with a gun-rights group whose supporters helped derail the bill in committee earlier in the week.

Senate Bill 24, a "stand-your-ground" bill that has the support of the National Rifle Association, has faced resistance from a rival group called Gun Owners of Arkansas. That group's most prominent supporters include a former Republican gubernatorial candidate and a man who attracted news coverage in recent years because of his relationship with a woman convicted of killing a former state senator.

The language in the bill that concerns the Arkansas gun group -- that a person defending himself must be "lawfully present" -- was put there to satisfy prosecutors.

Gun Owners of Arkansas, which touts thousands of followers on social media, has depicted SB24 as a "Trojan horse" that would sow confusion in Arkansas' concealed-carry and self-defense laws.

While SB24 passed easily out of the Senate last month, several House Republicans cited the concerns raised by Gun Owners of Arkansas as part of their decision to withdraw support for the bill.

Democrats have also vocally opposed SB24, pointing to studies in other states that show a correlation between stand-your-ground laws and an increase in gun violence, as well as greater success in using stand-your-ground defenses in Florida to justify killings of Black people.

Republicans have a supermajority in the House, but a slimmer majority on the 20-member House Judiciary Committee, and the loss of support of at least one Republican who joined Democrats in opposition to SB24 during a committee meeting Tuesday caused the bill to fail in a voice vote. (Two GOP members did not attend the meeting.)

The sponsors of the bill -- state Rep. Aaron Pilkington, R-Clarksville, and Sen. Bob Ballinger, R-Ozark -- then said they would attempt to extract the bill from committee by seeking approval from two-thirds of the House's 100 members. However, they faced pushback from House leaders over the rarely used maneuver.

Some lawmakers took aim at Gun Owners of Arkansas -- Ballinger referred to its supporters as "gadflies" and posted a letter from a larger but unaffiliated organization, Gun Owners of America, in support of SB24. But after a closed meeting with the Republican caucus Wednesday, Pilkington said he would meet with Gun Owners of Arkansas members to discuss possible amendments to the bill.

"We want to be good partners with them," Pilkington said Thursday.

At the center of Gun Owners of Arkansas' concerns is language in SB24 stating that someone must be "lawfully present" in a location in order to defend himself with use of deadly force and not attempting to retreat.

That language was added to similar legislation that Ballinger ran in 2019 to ease concerns raised by prosecutors opposed to the bill at the time.

Since Ballinger's version of a stand-your-ground bill failed two years ago, he and Pilkington said they have worked with prosecutors and included the "lawfully present" language in SB24 to ensure that the Prosecuting Attorneys Association would be neutral on the bill.

When asked last month whether he would consider amendments to SB24 proposed by Morgan and other opponents, Ballinger said that doing so would risk losing the support of prosecutors, a position he reiterated last week.

"There is no way to remove that provision and law enforcement to still be OK," Ballinger said.

The head of the Arkansas Prosecuting Attorneys Association, Benton County prosecutor Nathan Smith, did not respond to a request for comment Friday. Hempstead County Sheriff James Singleton, who heads the Arkansas Sheriffs Association, said he has not reviewed any amendments that would alter the group's neutral stance.

Michael Kaiser, a Little Rock defense attorney, said Friday that the language "lawfully present" has raised concerns from the gun community about how it would apply to people who carry weapons but don't have concealed carry licenses.

Kaiser achieved prominence in Arkansas' gun-rights community for his defense for a man stopped by police in Montgomery County for carrying a concealed pistol. His successful appeal in the case, Taff v. Arkansas, led many to declare Arkansas a "constitutional carry" state.

"How can we define it, I don't know, but we're going to have to, to pass this law," Kaiser said of "lawfully present."

After he spoke against SB24 Tuesday along with a representative of Gun Owners of Arkansas, Kaiser faced online criticism from supporters of the bill who pointed to his self-described "liberal" ideology and his legal defense work on behalf of protesters arrested during the 2020 Black Lives Matter demonstrations in Little Rock.

Kaiser responded to that criticism, telling a reporter he was retained by Gun Owners of Arkansas to provide a legal analysis of the bill "without any political slant." He added that he was paid about $250 by the group for his work.

None of the bill's sponsors had reached out to Kaiser as of Friday, he said.

Two members of Gun Owners of Arkansas, Gary Epperson and Tim Loggains, said Friday that they've spoken with Pilkington about possible revisions to the bill, discussions that they described as productive.

Morgan -- who Epperson said is a "close friend" but not formally a member of Gun Owners of Arkansas -- said in a text message to a reporter Friday that she has spoken with Ballinger and another senator about "small changes" that she is seeking in the bill.

"I think we've worked out solutions to the bill that I think [Pilkington] is agreeable to," Epperson said.

Loggains has frequented the state Capitol in past legislative sessions to advocate for bills that would expand concealed carry and other gun rights, but he attracted greater publicity in 2019 when his then-fiance, Rebecca O'Donnell, was arrested and charged in the stabbing death of former state Sen. Linda Collins, a mutual friend.

In the months after the murder, Loggains spoke out to defend his then-fiance against the charges, including in a nationally televised ABC interview. But after she pleaded guilty last year, he said he had been deceived by O'Donnell.

Ballinger said Friday that Loggains' past relationship with the killer of a fellow lawmaker affected his view of Loggains and Gun Owners of Arkansas.

"I think it's another reason why that group shouldn't have any credibility," Ballinger said.

Loggains said his relationship with O'Donnell has not come up in his conversations with lawmakers, and he did not feel that it weighed on his arguments against SB24. He added that he has not recently spoken with Ballinger.

"Anyone that would stoop to a personal attack is obviously indicating that they are losing on the arguments," Loggains said.

No new amendments to SB24 had been filed by either sponsor as of Friday. Pilkington said Thursday that he will attempt to find a "workable solution" among Republicans before taking the bill back before the House Judiciary Committee, though he did not have a timetable for doing so.

Meanwhile, gun control advocates against SB24 say they will continue to fight against attempts to enact stand-your-ground legislation, which they view as unnecessary and dangerous.

"Any amendments that are made to appease Gun Owners of Arkansas or other groups are not going to change Democrats' view of the bill," said state Rep. Nicole Clowney, D-Fayetteville.

Changes to the language around 'lawfully present," Clowney added, are likely to draw objections from law enforcement officials that "will only make [Democratic opposition] stronger."

Gov. Asa Hutchinson, a Republican who has yet to announce a stance on SB24, said in a statement Friday that he expects the bill to be amended.

"I have not seen the new revised language yet," Hutchinson said. "I will continue to review the legislation as it continues to be considered in committee."

House Speaker Matthew Shepherd, R-El Dorado, said last week that it was his preference along with "the vast majority of the membership" to have SB24 continue through the committee process in order to work out differences among the Republican caucus.

"I believe that there will be some form of a stand-your-ground bill passed in this session," Shepherd said. "I think that a lot of the debate and discussion is just about the technical nature, technical aspects of the bill itself."