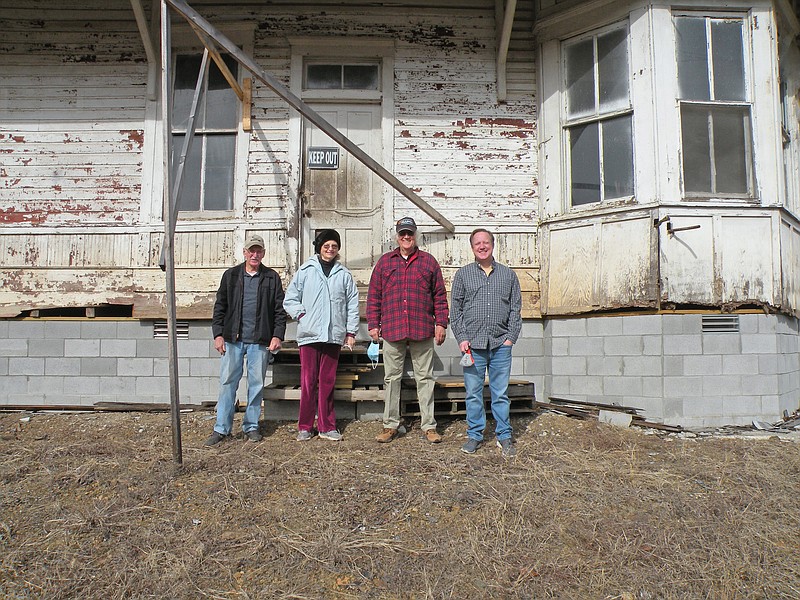 Recently named to Arkansas’ National Register of Historic Places, the Perry Rock Island Railroad Depot, built in 1918, awaits further restoration. Among those active in the campaign to restore the building as a museum and community center are, from left, Jimmy Middleton, Lynda Suffridge, Buford Suffridge and Michael Hibblen.

“Preserve Arkansas is the statewide nonprofit advocate for the preservation of Arkansas’ historic places. We fill the important role of advocating for and assisting with efforts to preserve historic buildings and sites all over the state,” she said.

“In the case of the Perry Depot, we have been working with the Perry County Historical and Genealogical Society since 2017 to save the depot,” Patton said. “It was included on our Most Endangered Places list in 2018, and after that time, efforts really ramped up to relocate the building to prevent it from being demolished.”

She said Preserve Arkansas assisted with an application for a Rural Community Grant from the Arkansas Division of Rural Services that was awarded for the project.

“Our organization also helped administer the grant by compiling and submitting the required expense reports and documentation,” Patton said. “Then, as mentioned above, I authored a National Register nomination for the depot. … The National Register designation will make the depot eligible for preservation-grant funds. The present challenge is

fundraising for the required grant match. Buford, Michael [Hibblen], Jimmy [Middleton] and others with the historical society have worked so hard on this project. When it is completed, it will be an asset for the Perry community.

“The depot stands as a reminder of the railroad’s importance to the founding of Perry and will also become a community meeting place and small-event venue.”

Suffridge, 80, is a retired dentist who lives in North Little Rock and maintains a farm in Perry County. He grew up in Perryville and was familiar with the railroad during its operational days.

“My dad had a sawmill in Perryville, and he used [the railroad] to ship and receive various things,” Suffridge said.

“I even rode the train once. It was Christmas of 1966. I was a student in dental school in Memphis, and I had read about the decline in passenger service on trains. My wife, Lynda, was teaching school in West Memphis, and she took me to the depot in Memphis. I knew the train no longer stopped in Perry, so I had to ride it to Ola, where my parents, aunt and uncle met me at 4 a.m.,” Suffridge said.

“We had to stop about midway to give way for the freight train,” he said, smiling. “We were sidelined for about 30 minutes. We were going about 30 mph as we left Little Rock, and I thought I might just jump out at Perry, but by the time we got here, we must have been going 75. … I just rode on to Ola.”

Suffridge said the first phase of the depot’s restoration project will be to refurbish the outside of the building, and the estimated cost for that project is about $20,000.

“Now that we are on the National Register, we are eligible to apply for another grant, but it’s a matching grant,” he said. “We’re just beginning our fundraising, so we will have to wait until next year before we have enough for our part of the grant.”

Suffridge said the Perry County Historical and Genealogical Society paid for the roofing of the depot last year, and R&A Roofing of Houston donated the labor. Weiss Building Supply of Perryville donated part of the materials as well.

“We finished the roof in August 2020,” he said, adding that the depot was moved to its current location in January 2020 by Combs Home Builders & House Movers of Ratcliff [in Logan County].

Michael Hibblen of Little Rock, a railroad historian, author of the book “Rock Island in Arkansas” and news director of National Public Radio’s KUAR in Little Rock, became involved in the depot-restoration project several years ago. He said the Perry Rock Island Depot was built in 1918.

“The line through Perry was initially built by the Choctaw, Oklahoma & Gulf Railroad in 1899, which was soon taken over by the Rock Island,” Hibblen said in a post on his website, hibblenradio.com. “This was part of a major railroad linking Memphis to Tucumcari, New Mexico. The shortline Little Rock & Western Railway was created to continue service on the tracks between Little Rock and Danville after the Rock Island was shut down in 1980.”

Patton wrote in the application for the National Register designation, “By 2017, the Little Rock & Western wanted additional storage space for equipment, and the most ideal place to put it was right next to their locomotive servicing facility, [where the old depot was located]. The only way to save the depot was to move it, and thankfully, the railroad was willing to wait for the depot to be relocated.”

Suffridge said the historical society believes the Perry Rock Island Depot is one of the few wood-frame depots still standing in the United States.

Jimmy Middleton, 86, who grew up in Perry, also remembers the railroad in its heyday.

“There wasn’t much for us kids to do here in Perry except stir up wasp nests and walk the railroad,” he said, laughing. “We want to restore this old depot … use part of it as a museum and part of it as a community event center.”

Middleton was instrumental in the restoration of the old Perry High School gymnasium, which is now rented out as an event center.

“It’s bigger than the depot, so if people just want a smaller place, the depot, when restored, will be just the place for them,” Middleton said.

Dr. Bill Pollard, a dentist in Conway, is also a longtime railroad enthusiast. He has photographed the Perry Rock Island Depot for many years.

“The restoration is an amazing project, a real success story for Perry and those who appreciate and want to preserve history,” Pollard said.

“For most communities, the railroad depot was a huge part of the day-to-day life, functioning as an economic driver, as well as a source of communication and, of course, transportation,” he said.

“Perry joins a small but elite group of cities that are successfully restoring what was once such an important part of the community. Many larger cities, such as Conway, lost their depots when city leaders or railroad management chose to ignore the historic value of these unique structures,” Pollard said.

“The Perry depot was witness to the passage of daily passenger trains delivering U.S. mail and railway express — yesterday’s version of the United Parcel Service,” Pollard said. “The depot saw departures as recruits left for service in the armed forces, and it was the place for excited homecomings to meet friends or relatives traveling from distant places.

“Many felt that the Perry depot was in an advanced state of deterioration and was perhaps beyond saving, but Michael Hibblen, Dr. Suffridge and others were determined to see the structure preserved. We all look forward to the continued progress of bringing this historic reminder of the Rock Island Railroad back to life.”