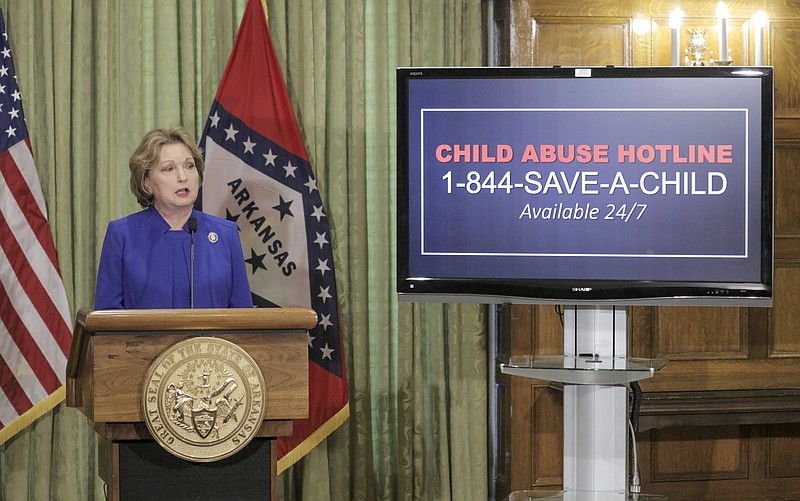 First Lady Susan Hutchinson talks about child abuse during the covid-19 outbreak on April 20, 2020, at the Governor's Conference Room in the state Capitol in Little Rock.

Arkansas Children’s Hospital saw an increase in the number and severity of child-abuse-related cases last year, a troubling pattern in a state that had high rates of child maltreatment before the onset of the covid-19 pandemic.

A preliminary review of data from March to September shows the number of maltreatment-related cases at the hospital was up 20%, said Dr. Karen Farst, a pediatrician and child abuse specialist. Some of the increase may have stemmed from population growth, she said.

The increased severity of injuries is concerning because the more serious a child’s injuries the more likely death will occur.

Nationally, the number of emergency department visits related to maltreatment decreased last year, but the percentage of those visits resulting in hospitalization “increased dramatically” compared with a year earlier, according to a study released in December from the U.S. Centers for Disease Control and Prevention. The study examined data from January 2019 to September 2020.

Before the pandemic began, Arkansas ranked among the 10 states with the highest rates of child deaths from maltreatment-related causes: 2.9 deaths for every 100,000 children, according to federal mortality data.

Child abuse professionals also “feel more stressed working in this environment,” Farst said, not just at the hospital but also at the Division of Children and Family Services, the Arkansas State Police and “all different layers of the response.”

That reality is paired with one in which children have fewer interactions with people other than their caregivers, so fewer people are able to spot signs of maltreatment and call the child abuse hot line.

The Arkansas State Police saw a decrease of about 9,000 calls for 2020 as of November and conducted about 100 fewer investigations, said Maj. Jeffrey Drew, commander of the Crimes Against Children Division.

Most of that drop occurred from March to May when school was all virtual, according to state reports.

School personnel place the most hot line calls of any mandated-reporter groups — at least 32% from 2015-17. Virtual school made it tougher for educators to spot signs of maltreatment, such as unexplained bruising, malnutrition or changes in behavior, said Mischa Martin, director of the Division of Children and Family Services, part of the Arkansas Department of Human Services.

When teachers and other school staffers “went home for three months, we saw significant drops” in abuse reports, Martin said. “But then our summer numbers were pretty close to in line with what they had been for prior years.”

“Not all kids are safe in their home,” said John, the ARBEST director. She noted that “upwards of 80% of maltreatment happens by parents and caregivers.”

The program she runs provides mental health resources for families and children, as well as training for therapists and teachers focused on childhood trauma.

Farst also said she’s seen more neglect-related cases, which she thinks is the result of families unable to provide for their children because of the economic decline created by the pandemic. Other childhood trauma and maltreatment prevention experts interviewed by the newspaper agreed.

Nationally, the percentage of emergency department visits related to child abuse and neglect that resulted in hospitalization went from 2.1% in 2019 to 3.2% in 2020, according to the CDC study. The largest increase was in children age 5 and under.

“The COVID-19 pandemic and the social and economic effects of mitigation measures, such as loss of income, increased stress related to parental child care and schooling responsibilities, and increased substance use and mental health conditions among adults increase the risk for child abuse and neglect,” the study says.

“These pandemic-related risk factors might be tied to the observed increased proportions of ED [emergency department] visits related to child abuse and neglect.”

Farst said this is the first time in her career that she can recall seeing such large swings in numbers of cases and injury severity. She started working in child-abuse medicine in 2004.

There was some research “after the great recession as far as families that were impacted by financial stress and job loss having a higher rate or risk of child abuse and the outcomes on that were kind of mixed,” she said.

“We’ve certainly had situations where kids were sick and also abused, and you just kind of have to minimize your risk,” Farst said.

Now that a vaccine is available, Division of Child and Family Services workers were among the first group as “first responders” eligible to receive inoculations, and Martin alerted staffers of their eligibility in an email Jan. 14.

A survey of workers indicated that only about 19% of 555 who responded said they had been vaccinated. Another 3% said they had a dose scheduled. The division isn’t requiring workers to get vaccinations, Martin said.

“We felt like tracking them or forcing them might make them less likely to get it,” she said.

Training also took a hit because of the pandemic. The state police took its investigator training online. The Human Services Department, meanwhile, skipped its annual training for family service workers.

Both agencies have faced staff shortages because employees have gotten sick or been exposed to the virus and had to quarantine, but they’ve continued to meet their service obligations, officials said.

“Covid has been really, really stressful to our organization when it was already a stressful job,” Martin said. “We didn’t shut down. We are charged with children’s safety.”

Read more in the Children in Peril series:

• Arkansas ranks high in child abuse and deaths. See more about the data:

• What happens when you call the Child Abuse Hotline? Learn more:

• Arkansas has a unique system of investigating allegations of child abuse. Read:

• Arkansas child gun-death rate among nation's 10 highest. Toddler Tacari Briggs was one of the youngest. Her story:

• Mental health workers fight rising number of suicides in Arkansas. A young survivor joins the push and talks about her struggles: