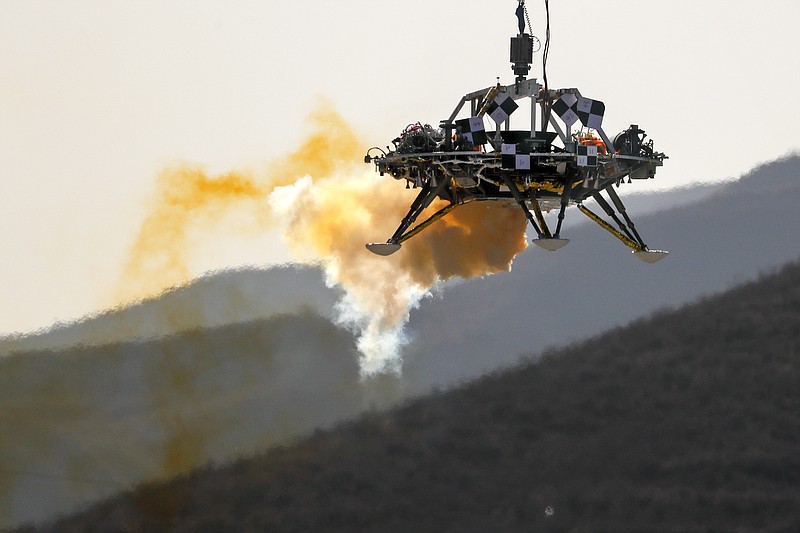 FILE - In this Thursday, Nov. 14, 2019 file photo, a lander is lifted during a test of hovering, obstacle avoidance and deceleration capabilities of a Mars lander at a facility in Huailai in China's Hebei province. China’s orbiter-rover combo, Tianwen-1, is scheduled to reach Mars on Wednesday, Feb. 10, 2021. (AP Photo/Andy Wong, File)

CAPE CANAVERAL, Fla. -- After hurtling hundreds of millions of miles through space since last summer, three robotic explorers are ready to hit the brakes at Mars.

The United Arab Emirates' orbiter reaches Mars on Tuesday, followed less than 24 hours later by China's orbiter-rover combo. NASA's rover will arrive on the scene a week later, on Feb. 18, to collect rocks for return to Earth -- a key step in determining whether life ever existed at Mars.

Both the UAE and China are newcomers at Mars, where more than half of Earth's emissaries have failed. China's first Mars mission, a joint effort with Russia in 2011, never made it past Earth's orbit.

"We are quite excited as engineers and scientists, at the same time quite stressed and happy, worried, scared," said Omran Sharaf, project manager for the UAE.

All three spacecraft rocketed away within days of one another last July, during an Earth-to-Mars launch window that occurs only every two years.

Called Amal, or Hope in Arabic, the Gulf nation's spacecraft is seeking an especially high orbit -- 13,500 by 27,000 miles high -- all the better to monitor the Martian weather.

China's duo -- called Tianwen-1, or "Quest for Heavenly Truth" -- will remain paired in orbit until May, when the rover separates to descend to the surface. If all goes well, China will be only the second country to land successfully on the red planet.

The U.S. rover Perseverance, by contrast, will dive in straight away for a harrowing sky-crane touchdown similar to the Curiosity rover's Martian entrance in 2012. The odds are in NASA's favor: It's succeeded in eight of its nine attempted Mars landings.

Despite their differences -- the 1-ton Perseverance is larger and more elaborate than the Tianwen-1 rover -- both will prowl for signs of ancient microscopic life.

Perseverance's $3 billion mission is the first leg in a U.S.-European effort to bring Mars samples to Earth in the next decade.

"To say we're pumped about it, well that would be a huge understatement," said Lori Glaze, NASA's planetary science director.

Perseverance is aiming for an ancient river delta that seems a logical spot for once harboring life. This landing zone in Jezero Crater is so treacherous that NASA nixed it for Curiosity. But scientists are keen to get hold of its rocks.

"When the scientists take a look at a site like Jezero Crater, they see the promise, right?" said Al Chen, who's in charge of the entry, descent and landing team at NASA's Jet Propulsion Laboratory in Pasadena, Calif. "When I look at Jezero, I see danger. There's danger everywhere."

Steep cliffs, deep pits and fields of rocks could cripple or doom Perseverance, following its seven-minute atmospheric plunge. With an 11 1/2-minute communication lag each way, the rover will be on its own, unable to rely on flight controllers. Amal and Tianwen-1 will also need to operate autonomously while maneuvering into orbit.

Until Perseverance, NASA sought out flat terrain on which to land -- "one giant parking lot," Chen said. That's what China's Tianwen-1 rover will be shooting for in Mars' Utopia Planitia.

NASA is upping its game thanks to new navigation technology designed to guide the rover to a safe spot. The spacecraft also has a slew of cameras and microphones to capture the sights and sounds of descent and landing, a Martian first.

Faster than previous Mars vehicles but still moving at a glacial pace, the six-wheeled Perseverance will drive across Jezero, collecting core samples of the most enticing rocks and gravel. The rover will set the samples aside for retrieval by a fetch rover launching in 2026.

Under an elaborate plan still being worked out by NASA and the European Space Agency, the geologic treasure would arrive on Earth in the early 2030s. Scientists contend it's the only way to ascertain whether life flourished on a wet, watery Mars 3 billion to 4 billion years ago.

NASA's science mission chief, Thomas Zurbuchen, considers it "one of the hardest things ever done by humanity and certainly in space science." 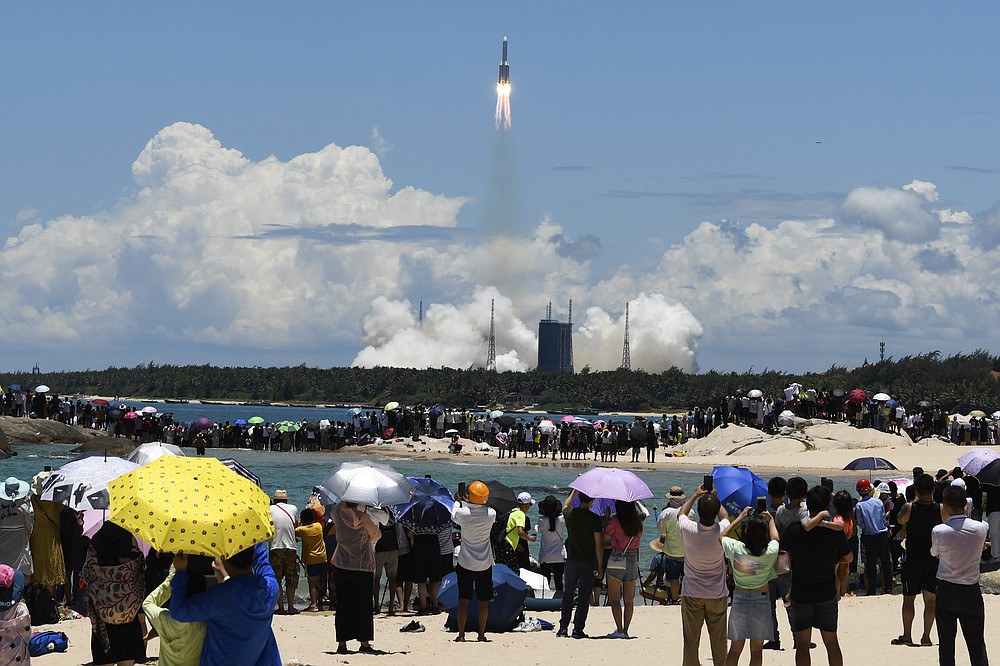 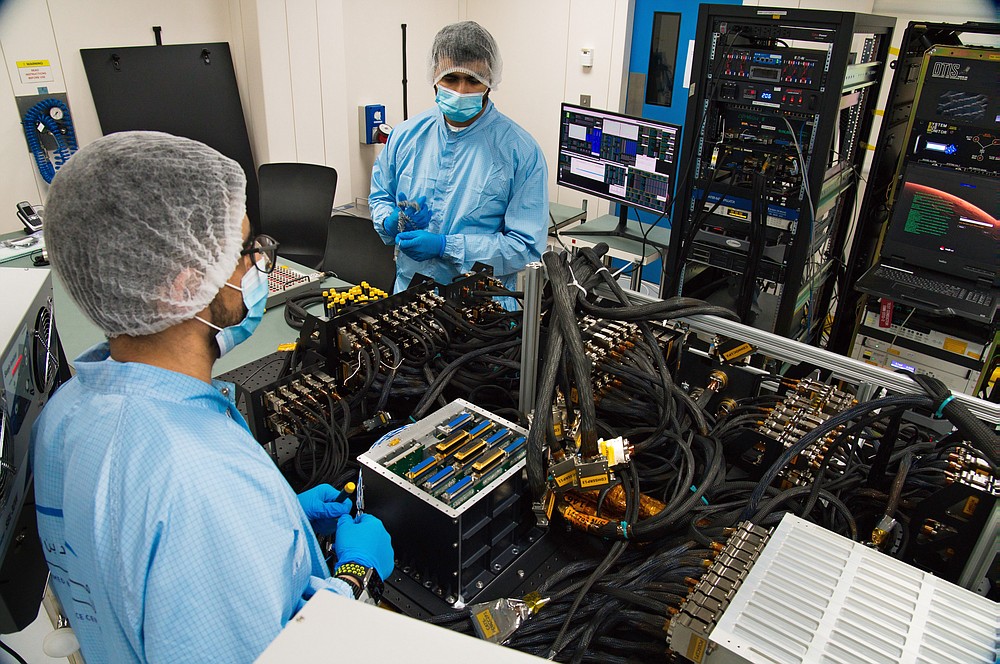 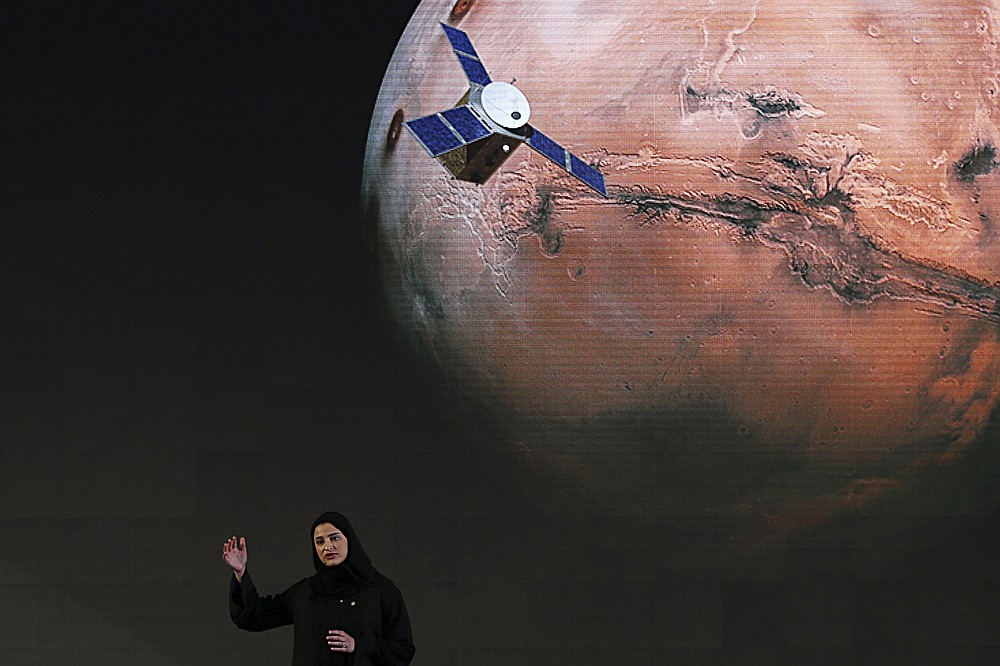 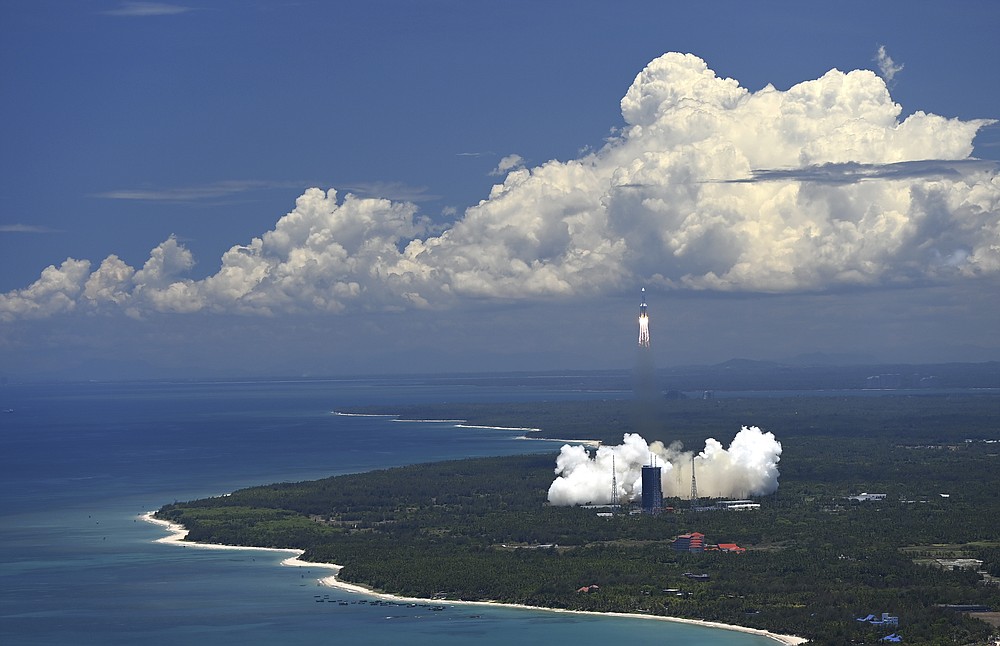 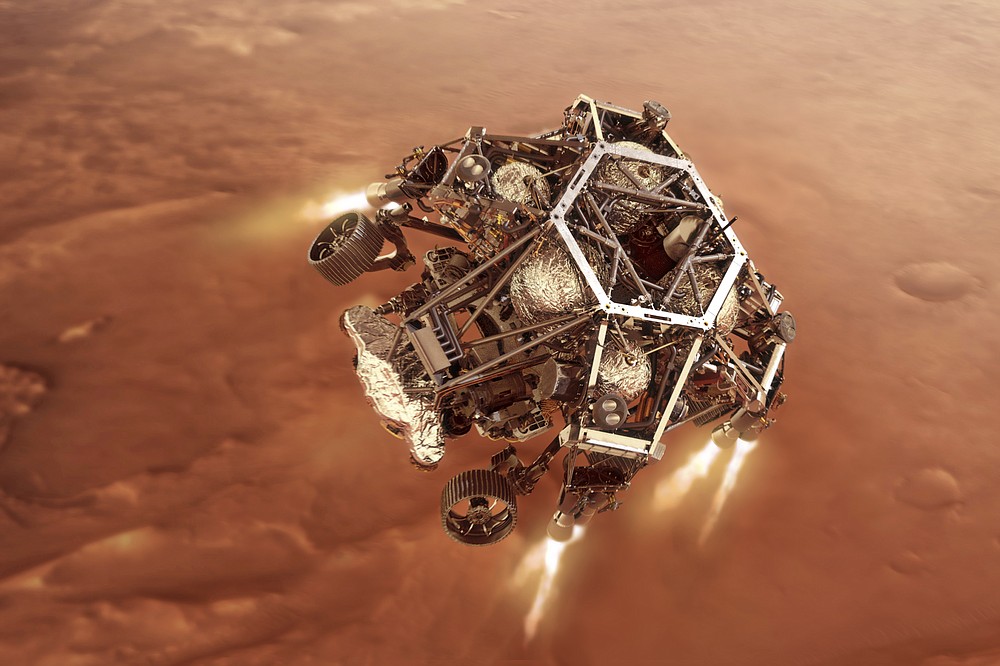 In this illustration provided by NASA, the Perseverance rover fires up its descent stage engines as it nears the Martian surface.. This phase of its entry, descent and landing sequence, or EDL, is known as "powered descent." (NASA/JPL-Caltech via AP) 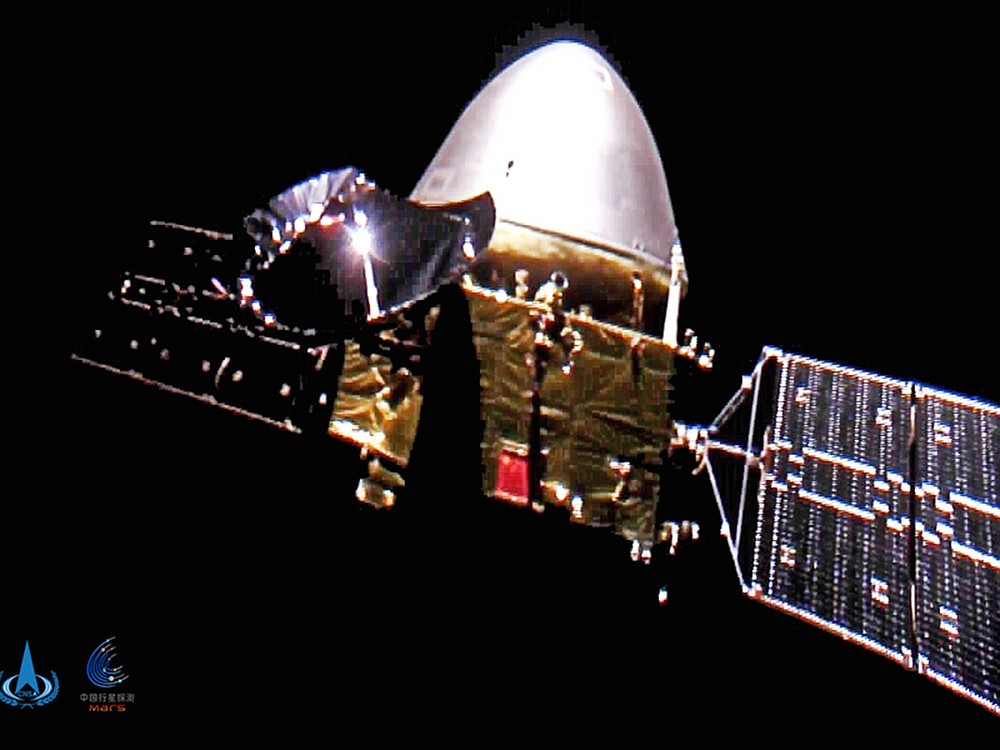 This image made available by the China National Space Administration on Wednesday, Dec. 16, 2020 shows the Tianwen-1 probe en route to Mars. China's duo _ called Tianwen-1, or “Quest for Heavenly Truth” _ will remain paired in orbit until May, when the rover separates to descend to the dusty, ruddy surface. If all goes well, it will be the second country to land successfully on the red planet. (CNSA via AP) 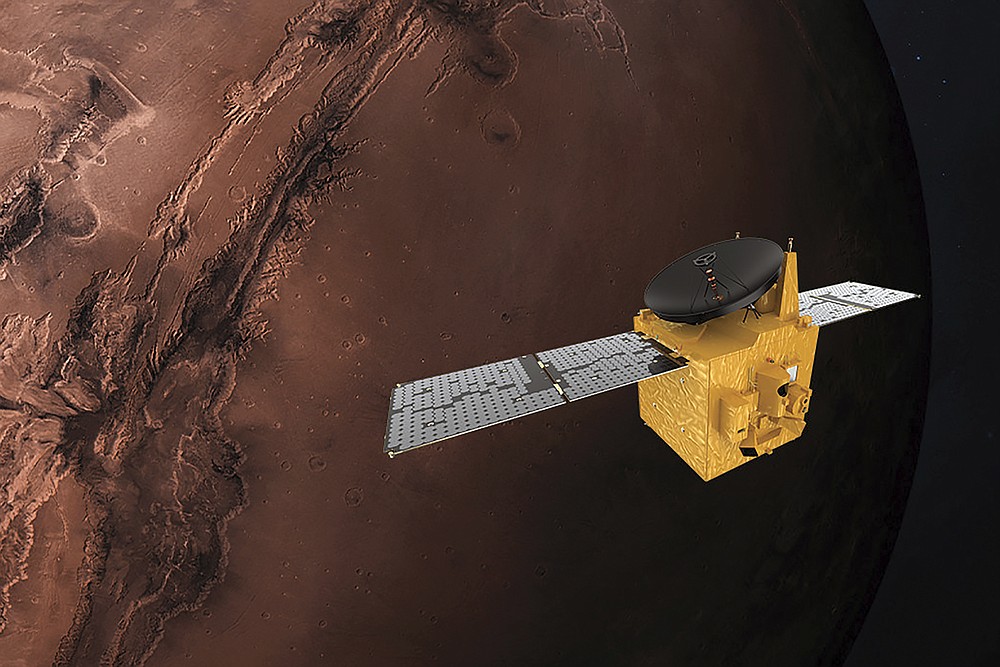 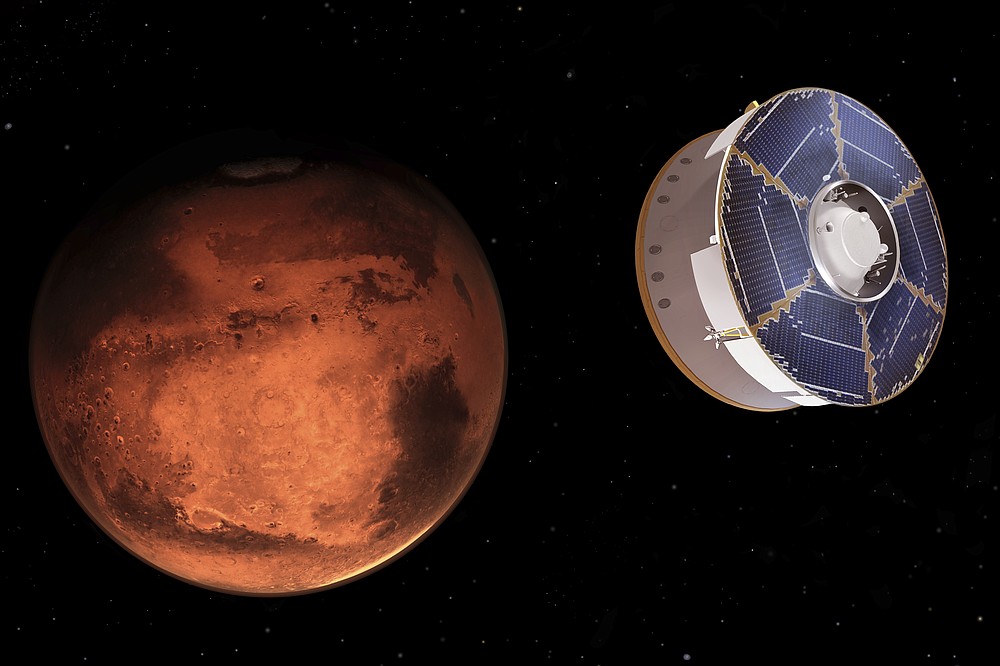 This illustration provided by NASA depicts the Mars 2020 spacecraft carrying the Perseverance rover as it approaches Mars. Perseverance’s $3 billion mission is the first leg in a U.S.-European effort to bring Mars samples to Earth in the next decade. (NASA/JPL-Caltech via AP) 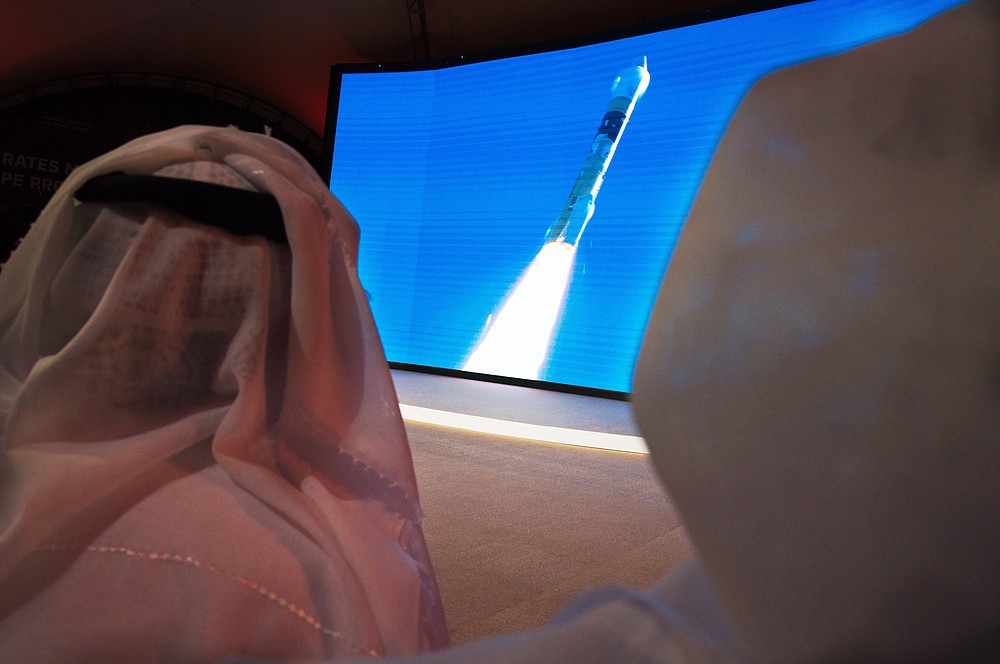 FILE - In this Monday, July 20, 2020 file photo, men watch the launch of the "Amal" or "Hope" space probe at the Mohammed bin Rashid Space Center in Dubai, United Arab Emirates. The orbiter is scheduled to reach Mars on Tuesday, Feb. 9, 2021, followed less than 24 hours later by China’s orbiter-rover combo. NASA’s rover will arrive on the scene a week later, on Feb. 18, to collect rocks for return to Earth _ a key step in determining whether life ever existed at Mars. (AP Photo/Jon Gambrell)
ADVERTISEMENT