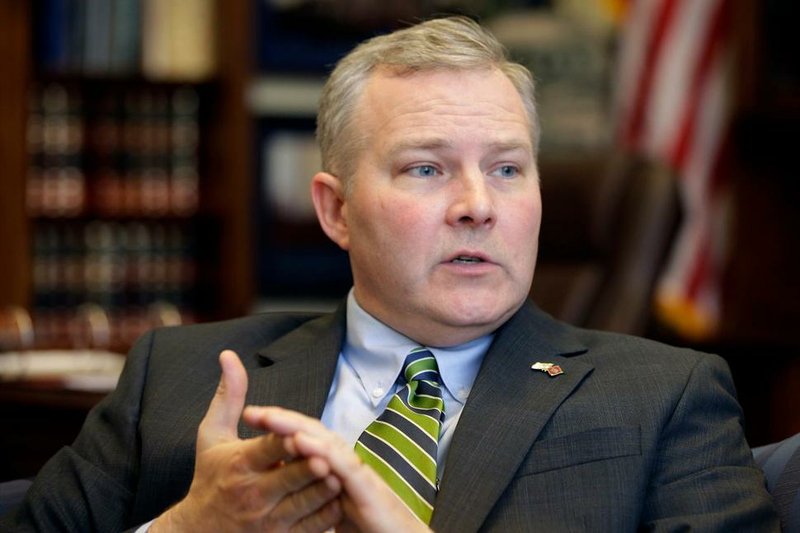 Lt. Gov. Tim Griffin said he will announce today that he is departing the governor's race to run for attorney general.

Griffin's announcement about his decision to change what office he is seeking in the Republican primary in 2022 comes two weeks after Sarah Huckabee Sanders, a former press secretary for the Trump administration, announced her own bid for governor in a campaign video. Former President Donald Trump endorsed Sanders.

Griffin's decision to bow out of the race he entered in August 2019 leaves Attorney General Leslie Rutledge of Maumelle and Sanders of Little Rock as the two announced Republican candidates for governor. Sanders is the daughter of former Gov. Mike Huckabee, a Republican. No woman has been elected as Arkansas governor.

Griffin reported raising more than $1.8 million in contributions for his campaign for governor from March 3, 2020, through the end of last year, and accumulating a campaign treasury totaling more than $1.7 million.

However, Sanders reported raising more than $1 million within four days of announcing her campaign.

Rutledge, who announced her candidacy in July, reported that she raised more than $1 million in contributions in two quarters through the end of last year.

The next campaign finance reports for candidates for state offices are due April 15.

Gov. Asa Hutchinson, who has served since 2015, is barred by the state's term limits amendment from seeking reelection.

Griffin, of Little Rock, said he has been "overwhelmed by the incredible support I have received from all corners of the state" since he announced his campaign for governor.

"While I believe Arkansans are ready for my message of bold, conservative leadership, my conversations with friends and supporters have persuaded me that at this time, I can do more for Arkansas in a different capacity," he said in a written statement to the Arkansas Democrat-Gazette.

"I have prayed about this decision with my family and I have listened."

Griffin has served as lieutenant governor since 2015 and was the state's 2nd District congressman from 2011-15. Among other things, he is a former aide to President George W. Bush and a former interim U.S. attorney.

Griffin said Arkansas needs an attorney general "who will back law enforcement, stand for law and order by cracking down on crime and corruption and fight the liberal agenda of the Biden/Harris Administration in court."

He was referring to President Joe Biden and Vice President Kamala Harris, both Democrats.

As a former U.S. attorney and an Army Judge Advocate General's Corps officer for the past 25 years, Griffin said he has prosecuted "those who have broken our laws."

"And just as I have done as your Lt. Governor, I will find ways to cut waste, save taxpayer money, and deliver results for the people of Arkansas," Griffin said. "I humbly ask for your prayers and support as I seek the office of attorney general."

As for the campaign contributions, Griffin said Sunday that "if someone requests the return of their contribution, we will return it."

Griffin's announcement that he is running for attorney general comes on the heels of Rutledge signaling last week that she doesn't plan to depart the governor's race to run for lieutenant governor.

"There is absolutely no truth in that whatsoever," she said when asked about speculation in some political circles on whether she'd switch races.

"After working a full-time job with a staff of 180 people, I'd be bored with a part-time job and a staff of two," Rutledge said.

"It's probably wishful thinking by one of my opponents," she added.

Rutledge has been attorney general since 2015. Among other things, she is a former aide to Huckabee when he was governor.

Another potential candidate for governor is Sen. Jim Hendren, R-Sulphur Springs, who has said he'll announce soon whether he's running. Hendren is a nephew of Hutchinson.

The governor's office is just one of several statewide offices that have confirmed and potential candidates.

Last week, the state's surgeon general, Greg Bledsoe of Little Rock, announced his bid for the Republican nomination for lieutenant governor in 2022.

Sen. Jonathan Dismang, R-Searcy, said last week that he will make a decision after this year's regular legislative session about whether to run for lieutenant governor.

Huckabee, who served as governor from July 1996-2007, said Sunday that if former U.S. Attorney Cody Hiland runs for attorney general next year, "I'd be committed to him because he was one of my 'stars' in the governor's office."

But "Tim is a long time friend, who is imminently qualified as well," he said in a text message to this newspaper.

Griffin would have been a formidable candidate in the governor's race, "but I'm obviously committed in that race as well," Huckabee said.

He said the good news is that Arkansas Republicans have a long list of very qualified and ready-to-serve candidates.

"I actually tried repeatedly to hire Tim in the governor's office, so I obviously know of his talents," Huckabee said.

Hiland could not be reached by telephone for comment late Sunday afternoon.

Arkansas Fair Housing Commission Director Leon Jones Jr. has described himself as a Republican candidate for attorney general on social media. He said Sunday in a text message to this newspaper that he is "still planning to run" for attorney general and will give interviews after he makes his formal announcement as a candidate.

Talk Business and Politics reported over the weekend that James "Rus" Russell, a 48-year-old small-business owner from Little Rock, said he will seek the Democratic nomination for governor next year, noting that he was "frustrated by leadership" after the state's covid-19 response and was motivated by the social justice protests of last summer. He and his wife run New Dawn Counseling, an outpatient mental health clinic.

Russell could not be reached for comment by telephone by the Democrat-Gazette on Sunday night.