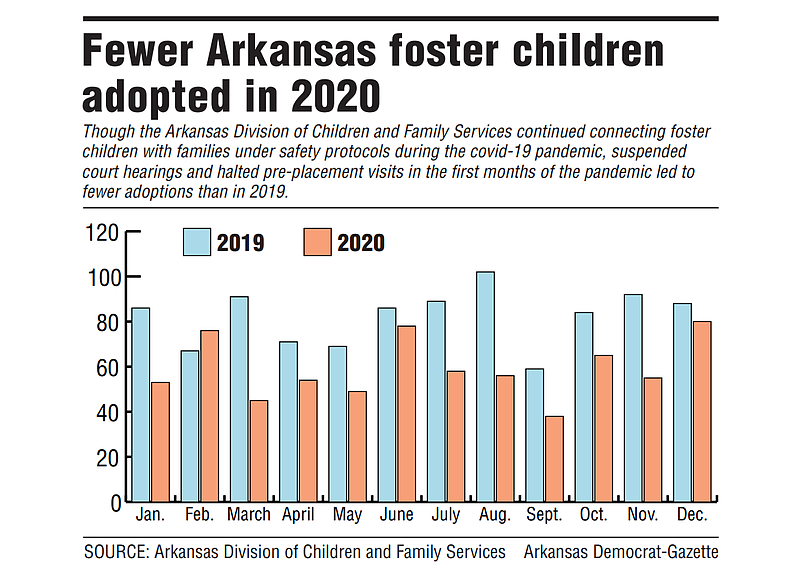 Fewer Arkansas foster children were adopted in 2020, according to figures from the Arkansas Division of Children and Family Services.

For adoptive parents in Arkansas in 2020, the covid-19 pandemic brought unpredictable timelines and unconventional processes.

Serena Vanderford, a mother of five, said the pandemic brought together her three adopted children, who are teenage siblings, sooner than expected when the two boys' school shut down before the rest of the state in March, and they could join their sister in her home. They were in separate foster care placements and hadn't lived together in nearly five years.

"At that point, we really just tried to focus on the fact that we got to be together when everything else seemed so uncertain," she said in an email.

But adding them to the family officially became a challenge when they all tested positive for the virus in August, derailing the planned September adoption date.

"I'm really proud of all my kids. Getting to be their mom, officially, is beyond anything I can describe," Vanderford said.

A myriad of pandemic-related factors, including halted court hearings and difficulty accessing services, resulted in more children waiting in the foster care system and fewer leaving it in 2020, according to Mischa Martin, director of Arkansas' Children and Family Services Division. There wasn't an increase in the number of children entering the system each month compared with 2019, data provided by the division shows.

In March and April, courts in the state largely halted dependency and neglect hearings. But Martin credited some judges in the state with making a priority of hearings dealing with child welfare and adoptions.

"Our courts have been really good partners and knew that they had to start having hearings, so that families would be served and children would get services," she said.

One of them, Benton County Circuit Judge Tom Smith, said the level of cases stayed about the same and he "didn't feel like we could just suspend the proceedings and not move forward." With dependency and neglect hearings, he said, the court must either terminate parental rights or reunify the family in order to get waiting children out of limbo.

"We couldn't stand still," he said.

During the pandemic, Smith said he has done both Zoom and in-person adoptions and continues to maintain a hybrid courtroom. For sensitive or complicated testimonies, such as those in parental rights hearings, he opts for in-person hearings.

He said the pandemic was a stressful time for foster families, and for birth parents who are struggling. Covid-19 may have upended the lives of people who "might have just been on the edge."

"2020 was a tough year for everyone, and then you throw in the issues with instability, addiction," Smith said.

Martin noted that it has been harder for birth parents of children in the foster care system who are working to overcome addiction and become stable to access treatment and counseling during the pandemic.

She said she didn't want to fault those parents for taking longer to become stable, and that taking more time to achieve that is not necessarily a bad thing if it results in them achieving lasting stability and being able to reunify with their children.

Arkansas, unlike many other states, never stopped doing in-person visits between birth parents and foster kids, though the division also allowed them to connect through apps including FaceTime and Zoom.

"Visitation is the most important service that we offer," Martin said. "They need to bond with their parent. We really encouraged in-person visits and said that should be the standard."

Videoconferenced visits become the norm if a parent or child is positive for covid-19. In the spring of 2020, the division encouraged parents to visit with kids at playgrounds, because there's less risk of spreading the virus outdoors.

Martin said the division tracks the number of staff members who test positive for covid-19, but don't track the reasons for infection. She said some staff members have become positive because of visitations, but it has been minimal. If a child becomes positive, they stay at a "quarantine house" with division staff that is owned by Methodist Family Health.

Kimberly Poore Wieneke, an adoptive and foster parent in Fort Smith, said it can be scary to have the foster kids visit with their birth parents when she doesn't know if they've been following health guidelines. She said, however, those visits take place at the local chapter of The Call, a nonprofit that recruits and provides resources for foster families, and adults are required to wear masks.

Wieneke said she has cared for a total of six foster children for various amounts of time during the pandemic. She and her husband now have two young foster children who are brothers, in addition to a 3-year-old boy they adopted in April.

Martin also noted that the pandemic made it more difficult to do pre-placement visits with prospective families.

Vanderford said she met her three adopted children in October 2019 at an event put on by Project Zero, a nonprofit that aims to connect children in the foster care system with adoptive families.

Before the pandemic, Project Zero hosted "connection events" at least once a month, Executive Director Christie Erwin said. 2020 was set to have a "jam-packed calendar," which came to an abrupt halt after the first three months. The state's first case of coronavirus was identified March 11.

The nonprofit had to rely more on its digital outreach, which includes a "Heart Gallery" of photos and videos of children waiting to be adopted out of foster care on its website. Erwin said the organization worked to produce more videos about the children, something it started doing about five years ago.

"Something about hearing them talk and hearing what they like and who they are makes a difference," she said.

The organization also began a program in partnership with the Division of Children and Family Services called "Zooming for Zero," a weekly video conference event to introduce prospective parents to waiting children.

"Obviously, we look at it not as a statistic. ... Each one represents a child that's been waiting, that's been in the Heart Gallery. Some of them have been waiting a really long time to be adopted. We're grateful for that number with the kind of year that they've had," Erwin said.

Martin also noted that 2019 was a banner year for adoption. The division had made it a big focus in the last few months of the year, in part because November is National Adoption Month. Not as many children were ready for adoption at the same point in time in 2020 because of the court delays and difficulty of doing pre-placement hearings, she said.

But the division has also made uniting foster children with relatives a policy priority for several years now, and she said relatives really stepped up in 2020.

"We are very much driven by what is the right thing to do for kids," Martin said. "The research and the studies show that children do better when placed with relatives. They need that connection."

Foster and adoptive parents like Wieneke and Vanderford said they were determined to continue giving kids in need a home despite the difficulties brought on by the pandemic.

Wieneke and her husband made national news in April when they were among the first parents to go through an entirely virtual adoption process during the pandemic.

Everything was online, with the judge's secretary watching the couple sign documents over Zoom and email them in.

"It was pretty interesting," she said.

They'd been fostering Jaden, now an active 3-year-old who loves to laugh, since May 2019, and decided in November 2019 that they didn't want him leaving the "people that have loved him his whole life."

Wieneke said it was disappointing to not have the experience of being in the courtroom and getting a family picture with the judge, but "the main thing was we got to adopt him."

Vanderford says she has room for five foster children and has stayed "maxed out" during the pandemic, taking in 13 kids in the past year. She said most of the kids have been teenagers, whom she said have handled the uncertainty well, because unfortunately, it's not unfamiliar to them.

"This feeling that we are just now experiencing is something they are used to," she said. "That was a bit of reality check for me. It made me even more determined to continue fostering and with our adoption journey."