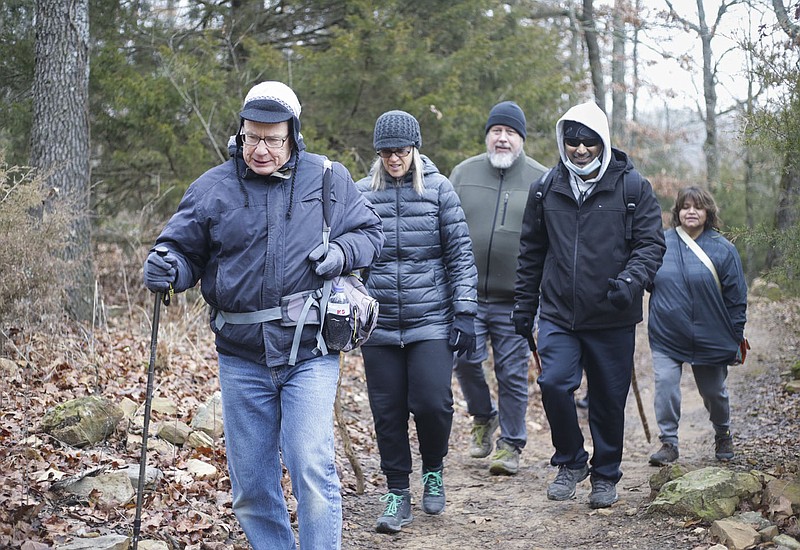 Greg Zeck (from left) leads hikers, Anne Neumann, Bryan Fleming, Pavan Pelluru and Claudia Garcia, Sunday, February 7, 2021 at the Bayyari Park hiking trail in Springdale. Springdale has six trail projects in some stage of planning or construction and has allocated all of its money available this year for the projects. Check out nwaonline.com/210208Daily/ for today's photo gallery. (NWA Democrat-Gazette/Charlie Kaijo)

SPRINGDALE -- The city has six trail projects in some stage of planning or construction and has allocated all of its money available this year for the projects, reported Brad Baldwin, director of the city's Engineering and Public Works departments.

That means $10 million for new trails and projects currently underway, he said.

Springdale adopted its Trail Plan in 2018, according to Patsy Christie, the city's director of planning. The city's Parks and Recreation Department maintains 26 miles of trails, said Chad Wolf, department director.

The city each year budgets $1 million for building trails, Baldwin said. The money comes to the city through the 1/2-cent sales tax on gasoline. The money goes to the Arkansas Department of Transportation, which allocates money back to cities and counties, he said.

The city also uses federal and state grants, which often are matched by the city dollar for dollar or with the city paying 20% and the grant paying 80%. The Walton Family Foundation also has contributed millions of dollars in grants to build trails throughout the region.

"We apply for everything and see what we get," Baldwin said.

"The trails committee has come to a good place to sit back and reevaluate," Baldwin said. "They need to consider if they want to make some connections between existing trails before pushing out east and west with new projects."

The six projects underway include:

• Dean's Trail, Phase 3B will run from the animal shelter to hook up with the trails at Lake Fayetteville. This project isn't funded.

The Northwest Arkansas Regional Planning Commission several weeks ago awarded Springdale $125,000 to help build the bicycle and pedestrian bridge. A grant from the Arkansas Transportation Department in November gave the city $250,000 for the same project.

The Northwest Arkansas Trailblazers have started a trail project to the Fitzgerald Mountain bicycle trails off Old Missouri Road to The Jones Center and downtown Springdale. The group has said it will deed the trail to the city.

Several of these projects are awaiting design approval by the Transportation Department. They have been delayed because of restrictions related to covid-19, Baldwin said. Any project that receives state or federal highway money requires state approval, he added.

The Northwest Arkansas Regional Planning Commission adopted a Bicycle and Pedestrian Trail Plan in December 2015. The commission began in 2000 a long-range planning process that included regional trails as a key component.

The Walton Family Foundation in 2018 released the results of a study that found bicycling provided $137 million to the Northwest Arkansas economy, including $86 million in total health benefits.

The backbone of the region's trail system is the 37.5-mile Razorback Greenway, opened in 2015. The paved, shared-use trail extends from south Fayetteville to Bella Vista.

Trail plans in place for Springdale and 31 other cities in Northwest Arkansas have the shared goal of trail development to tie all residents to the Razorback Greenway, which provides access to every city in the region.

"We're not close to finishing what we adopted in 2015," Conklin said. The regional trails plan set out to create a world-class trail program.

Creators of the plan identified 17 catalyst projects, which all cities continue to implement.

This loop would connect downtown to the Tyson Food corporate offices to Arvest Ballpark, Johnson, Elm Springs and Tontitown.