Sides map strategies in run-up to trial by Compiled by Democrat-Gazette Staff From Wire Reports | February 8, 2021 at 7:09 a.m. 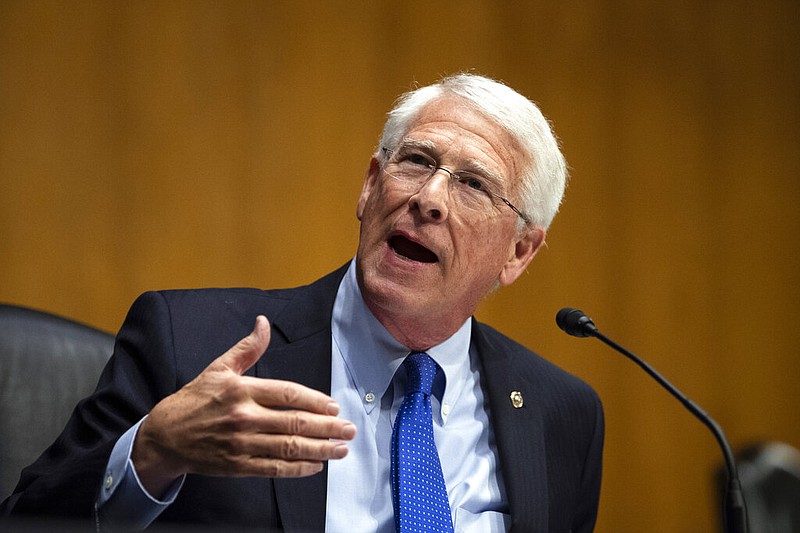 U.S. Sen. Roger Wicker, R-Miss., speaks during a meeting of the Senate Environment and Public Works committee on Capitol Hill in Washington on Wednesday, Feb. 3, 2021. Michael Regan, the nominee to serve as administrator of the Environmental Protection Agency, was testifying during his confirmation hearing.

WASHINGTON -- Former President Donald Trump's defenders in the Senate on Sunday rallied around the former president before his impeachment trial, dismissing it as a waste of time and arguing that the former president's fiery speech before the U.S. Capitol insurrection does not make him responsible for the violence of Jan. 6.

"If being held accountable means being impeached by the House and being convicted by the Senate, the answer to that is no," Sen. Roger Wicker, R-Miss., said on ABC's "This Week,"making clear his belief that Trump should and will be acquitted. Asked if Congress could consider other punishment, such as censure, Wicker said the Democratic-led House had that option earlier but rejected it in favor of impeaching him.

"That ship has sailed," he said.

The Senate is set to launch the impeachment trial Tuesday to consider the charge that Trump's words to protesters at a Capitol rally as well as weeks of claims that the presidential election was stolen or rigged provoked a mob to storm the Capitol. Five people died as a result of the attack, including a police officer.

Many senators including Senate Minority Leader Mitch McConnell, R-Ky., immediately denounced the violence and pointed a finger of blame at Trump. After the riot, Wicker said Americans "will not stand for this kind of attack on the rule of law" and without naming names, said "we must prosecute" those who undermine democracy.

But with Trump now gone from the presidency, Republicans have shown little political appetite to take further action, such as an impeachment conviction that could lead to barring him from running for future office. Those partisan divisions appear to be hardening ahead of Trump's trial, a sign of his continuing grip on the GOP.

[Video not showing up above? Click here to watch » https://www.youtube.com/watch?v=G8ZuDVvlViY]

On Sunday, Wicker described Trump's impeachment trial as a "meaningless messaging partisan exercise." When asked on "This Week" if Trump's conduct should be more deserving of impeachment than President Bill Clinton's, whom Wicker voted to impeach, he said: "I'm not conceding that the President Trump incited an insurrection." Clinton's impeachment, in 1998, was sparked by his false denial in a deposition of a sexual relationship with a White House intern.

"If we're going to criminalize speech, and somehow impeach everybody who says, 'Go fight to hear your voices heard,' I mean really we ought to impeach Chuck Schumer then," Paul said on "Fox News Sunday," referring to the now Democratic Senate majority leader and his criticisms of Justices Neil Gorsuch and Brett Kavanaugh. "He went to the Supreme Court, stood in front of the Supreme Court and said specifically, 'Hey Gorsuch, Hey Kavanaugh, you've unleashed a whirlwind. And you're going to pay the price.'"

Paul noted that Chief Justice John Roberts had declined to preside over this week's impeachment proceeding because Trump was no longer president. Sen. Patrick Leahy, D-Vt., will preside over the trial as Senate president pro tempore.

"It is a farce, it is unconstitutional. But more than anything it's unwise, and going to divide the country," Paul said.

Last month, Paul forced a vote to set aside the trial as unconstitutional because Trump is no longer in office, which legal experts say is disputable. But the vote suggested the near impossibility in reaching a conviction in a Senate where Democrats hold 50 seats but a two-thirds vote -- or 67 senators -- would be needed to convict Trump. Forty-four Republican senators sided with Paul and voted to oppose holding an impeachment trial at all. Joining Democrats to reject Paul's motion were Sens. Mitt Romney, R-Utah; Ben Sasse, R-Neb.; Susan Collins, R-Maine; Lisa Murkowski, R-Alaska; and Pat Toomey, R-Pa.

Some Republicans have said the vote doesn't "bind" them into voting a particular way on conviction, with Sen. Bill Cassidy, R-La., saying Sunday on NBC's "Meet the Press" he would listen carefully to the evidence. But even Trump's sharper GOP critics on Sunday acknowledged the widely expected outcome.

"You did have 45 Republican senators vote to suggest that they didn't think it was appropriate to conduct a trial, so you can infer how likely it is that those folks will vote to convict," said Toomey, who has made clear he believes Trump committed "impeachable offenses."

"I still think the best outcome would have been for the president to resign" before he left office, he said on CNN's "State of the Union." "Obviously he chose not to do that."

Sen. Lindsey Graham, R-S.C., one of Trump's ardent defenders, said he believes Trump's actions were wrong and "he's going to have a place in history for all of this," but insisted it's not the Senate's job to judge.

"It's not a question of how the trial ends, it's a question of when it ends," Graham said on CBS' "Face the Nation." "Republicans are going to view this as an unconstitutional exercise, and the only question is, will they call witnesses, how long does the trial take? But the outcome is really not in doubt."

Rep. Adam Schiff, D-Calif., who spearheaded the prosecution in Trump's first impeachment trial last year, said he was not surprised that the ex-president's supporters would put forth "that process argument" of calling the House impeachment vote unduly rushed.

"There was a real sense of urgency," Schiff said on "Meet the Press," speaking of the riot's aftermath. Of Trump, he said, "we felt in the House... that every day he remained in office, he was a danger to the country."

House impeachment prosecutors managing Trump's impeachment trial are prepared to complete the proceeding in as little as a week, forgo distracting fights over witnesses and rely more heavily on video, according to a half-dozen people working on the case.

When the trial opens Tuesday, the prosecutors will try to force senators who lived through the deadly rampage on the Capitol to reckon with the totality of Trump's monthslong drive to overturn the election and his failure to call off the assault they argue it provoked.

"The story of the president's actions is both riveting and horrifying," Rep. Jamie Raskin, D-Md., the lead prosecutor, said in an interview. "We think that every American should be aware of what happened -- that the reason he was impeached by the House and the reason he should be convicted and disqualified from holding future federal office is to make sure that such an attack on our democracy and Constitution never happens again."

Trump's lawyers have indicated that they intend to mount a largely technical defense, contending that the Senate "lacks jurisdiction" to judge a former president after he has left office because the Constitution does not explicitly say it can.

The lawyers, Bruce Castor Jr. and David Schoen, also plan to deny that Trump incited the violence or intended to interfere with Congress formalizing Biden's victory, asserting that his claims that the election was "stolen" are protected by the First Amendment. And Castor told Fox News that he, too, would rely on video, possibly of unrest in American cities led by Democrats.

The managers will try to rebut them as much with constitutional arguments as an overwhelming compendium of evidence. Raskin's team has spent dozens of hours culling a deep trove of videos captured by the mob, Trump's own unvarnished words and criminal pleas from rioters who said they acted at the former president's behest.

The primary source material may replace live testimony. Trying to call new witnesses has been the subject of an extended debate by the managers, whose evidentiary record has several holes that White House or military officials could conceivably fill. At the last trial, Democrats made an unsuccessful push for witnesses a centerpiece of their case, but this time, many in the party say they are unnecessary to prove the charge and would simply cost Biden precious time to move his agenda without changing the outcome.

Meanwhile, Rep. Liz Cheney, R-Wyo., the third-ranking House GOP leader, said Sunday she was undeterred by a censure from Wyoming Republicans and criticism from some House colleagues over her vote to impeach Trump, and will not resign or back off her repudiation of the former president.

She suggested that if she were in the Senate, she might vote to convict Trump over his role in the Jan. 6 riot at the Capitol.

"I would listen to the testimony -- I would listen to the evidence," Cheney told "Fox News Sunday." "I obviously believe and did then that what we already know is enough for his impeachment. What we already know does constitute the gravest violation of his oath of office by any president in the history of the country, and this is not something that we can simply look past or pretend didn't happen or try to move on."

"We've got to make sure this never happens again," she said.

On Saturday, the Wyoming Republican Party voted overwhelmingly to censure Cheney. Only eight of the 74-member state GOP's central committee opposed the punishment in a vote that did not proceed to a formal count. The censure document accused Cheney of voting to impeach Trump, even though the House didn't offer him "formal hearing or due process."

That followed a 145-61 secret-ballot vote this past week in the nation's capital in which House Republicans overwhelmingly rebuffed a rebellion by hard-right conservatives to toss Cheney from leadership over her impeachment vote.

Cheney has said repeatedly she voted her conscience in backing impeachment for the riot, which followed a rally where Trump encouraged supporters to get rid of lawmakers who "aren't any good, the Liz Cheneys of the world."

Information for this article was contributed by Hope Yen and Mary Clare Jalonick of The Associated Press; by Nicholas Fandos of The New York Times; and by Laura King of the Los Angeles Times. 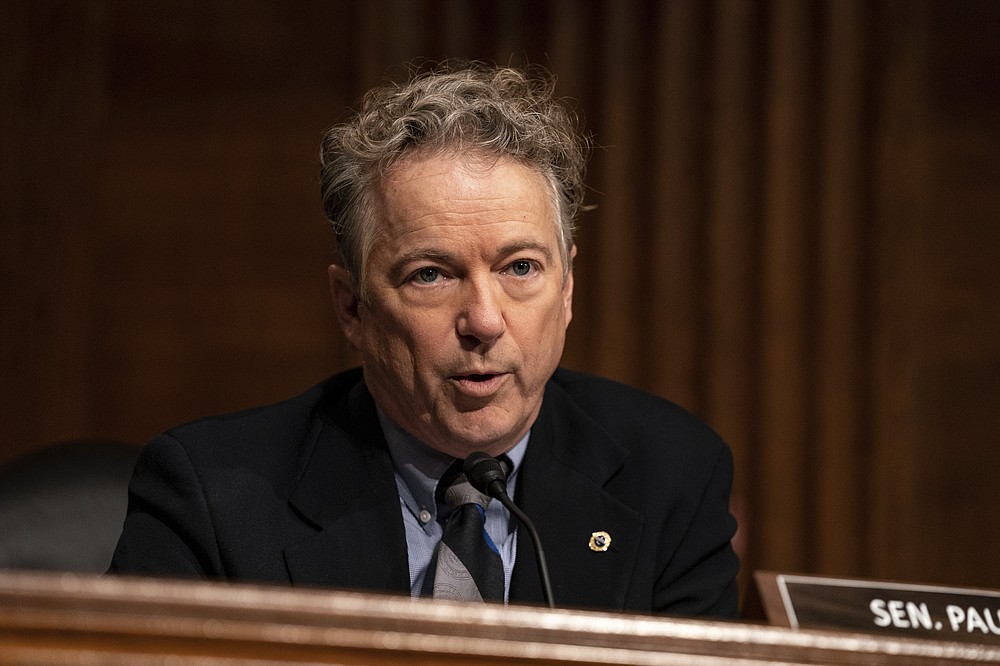 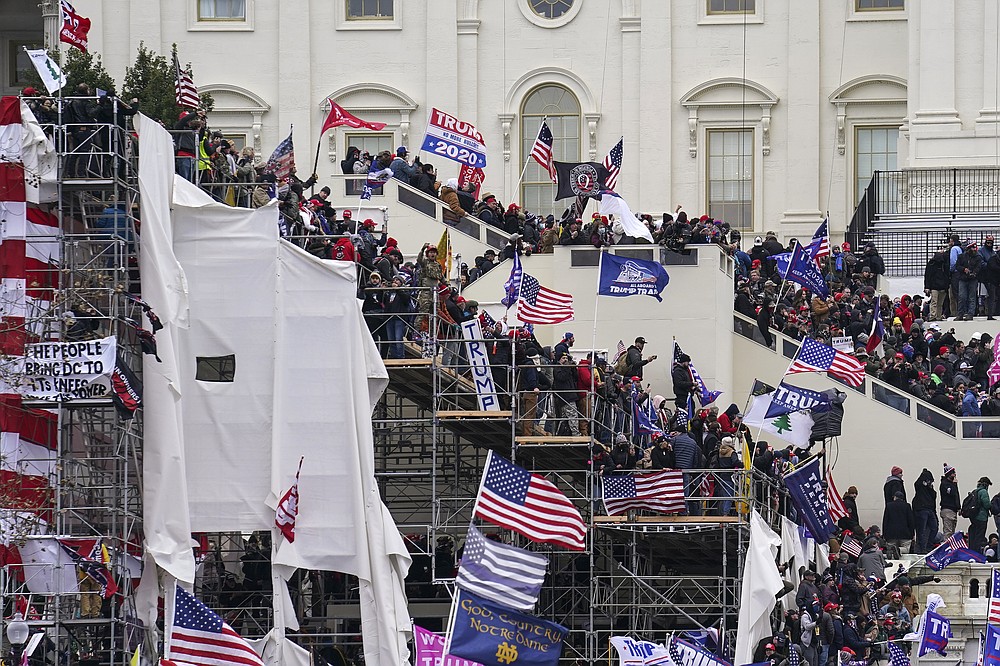 FILE - In this Jan. 6, 2021, file photo rioters loyal to President Donald Trump storm the U.S. Capitol in Washington. Arguments begin Tuesday, Feb. 9, in the impeachment trial of Donald Trump on allegations that he incited the violent mob that stormed the U.S. Capitol on Jan. 6. (AP Photo/John Minchillo, File) 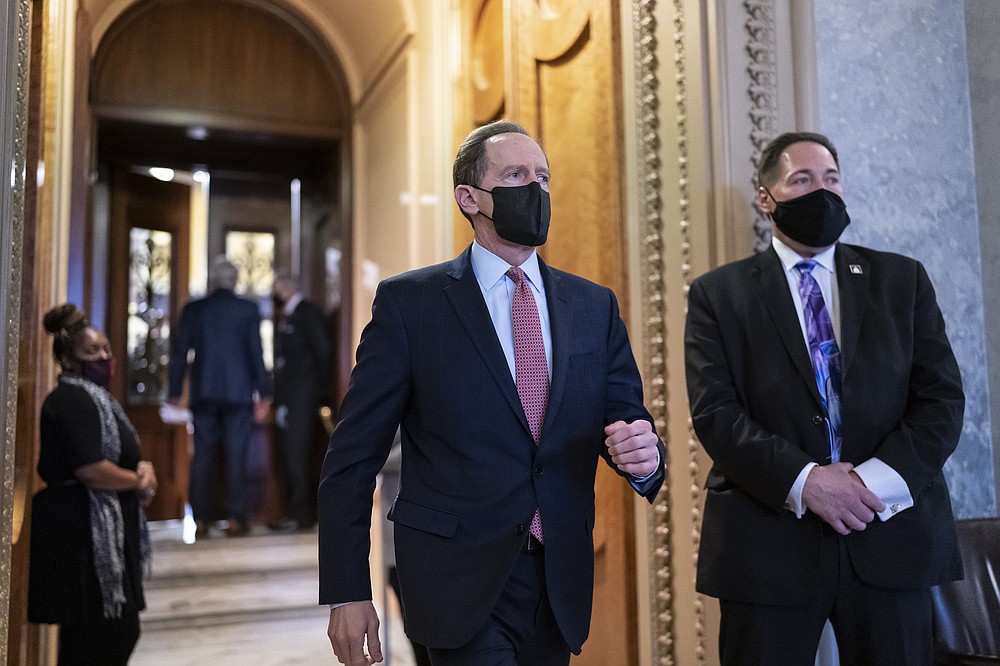 Sen. Pat Toomey, R-Pa., leaves the chamber after taking an oath and voting on how to proceed on the impeachment against former President Donald Trump, at the Capitol in Washington, Tuesday, Jan. 26, 2021. (AP Photo/J. Scott Applewhite) 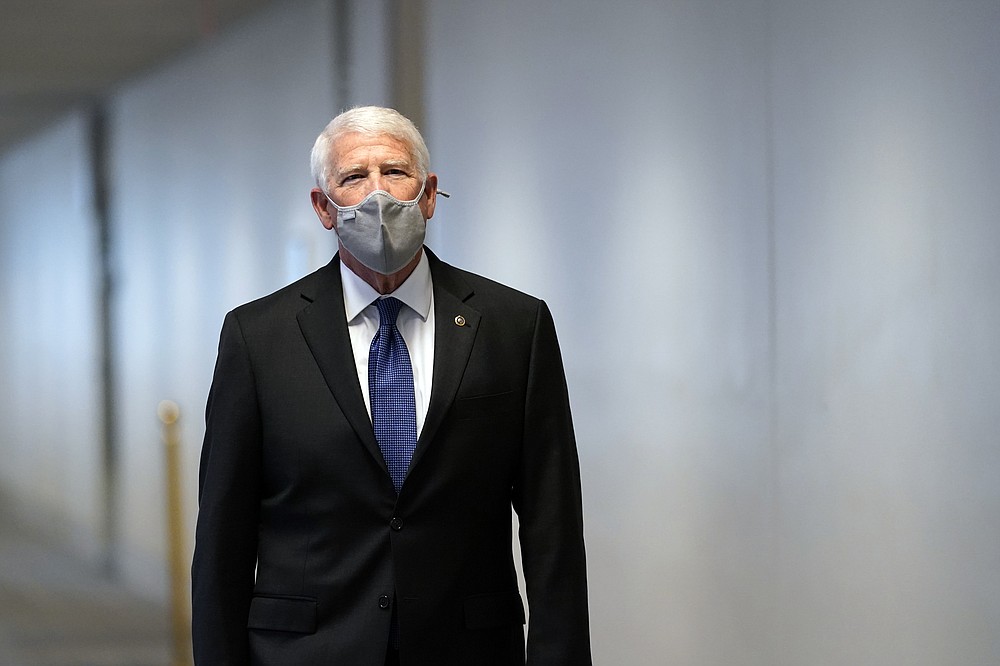