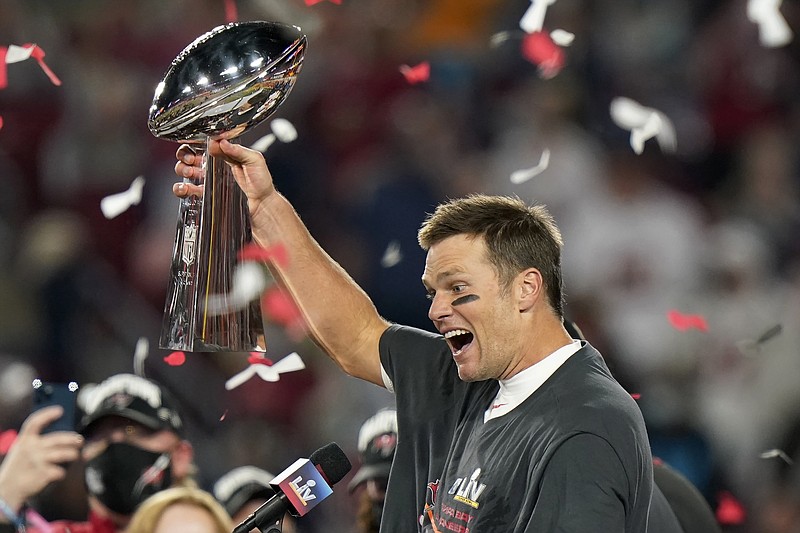 TAMPA, Fla. -- Tom Brady made the Buccaneers, their fans and their city believe from the moment he arrived in Tampa Bay.

With help from old friend Rob Gronkowsk and a ferocious defense, Brady and the Buccaneers are Super Bowl champions.

Brady threw two touchdown passes to Gronkowski and one to good pal Antonio Brown, and the Buccaneers routed Patrick Mahomes and Kansas City 31-9 on their home field in Super Bowl 55 on Sunday.

"You get this far and you wanna get the job done and we did it," Brady said. "We just believed. I"m so proud of the guys."

Despite moving south to a new team and conference during a pandemic, Brady didn't slow down at age 43.

Brady earned his fifth Super Bowl MVP award and extended his Super Bowl titles' record in his 10th appearance, nine with New England. Brady broke his own mark for oldest player to win a Super Bowl and joined Hall of Famer Peyton Manning as the only quarterbacks to win one with multiple franchises.

"I think they're all special," Brady said. "I'm not making any comparisons. Experiencing it with this group of guys is amazing."

Stunningly, it was easier than any of his previous Super Bowl victories, which came by an average margin of five points. Mahomes lost by double digits for the first time in his four-year career.

The Buccaneers took their second NFL title and first in 18 years as the first team to play the big game at home, capping an unusual and challenging season played through the novel coronavirus. They won three road games as a wild card to reach the Super Bowl, and joined the NHL's Lightning as a 2020 season champion. The Rays also went to the World Series but lost to the Dodgers.

Mahomes and the Chiefs failed to become the first repeat champions since Brady's Patriots in 2003-04.

"I didn't see it coming at all," Chiefs Coach Andy Reid said. "I thought we were going to come in and play these guys just like we've been playing teams, and it didn't happen that way. I give them credit on that."

Due to the virus, only 25,000 mask-wearing fans attended, including approximately 7,500 vaccinated health care workers given free tickets by the NFL. About 30,000 cardboard cutouts made the stadium look full.

"Obviously I didn't play the way I wanted to play," Mahomes said. "What else can you say? All you can do is leave everything you have on the field. I feel like the guys did that. ... They beat us pretty good, the worst I've been beaten in a long time."

"This really belongs to the coaching staff and our players. I didn't do a damn thing," Arians said after he was handed the trophy.

Bowles devised a masterful plan to frustrate Mahomes and shut down the Chiefs, the complete opposite of Kansas City's 27-24 win in Tampa in Week 12, when the Chiefs jumped to a 17-0 lead in the first quarter. Tyreek Hill had 269 yards receiving and three TDs in that one. He was held to 73 yards on seven catches Sunday.

"To come here and be Super Bowl champs, it's surreal, man," said Gronkowski, who came out of retirement to play with Brady. "We have so many superstars on this team but nobody's head was too big. Whoever got the ball got the ball. That's what was so great about being on this team. There was no one who was selfish on this team. No one selfish in the organization. It just happened to be me this time getting the touchdown passes."

Tampa missed an opportunity to extend the lead when Brady's 2-yard pass to offensive lineman Joe Haeg was knocked out of his hands in the end zone, and Ronald Jones was stopped short on consecutive carries.

But the Chiefs didn't gain any momentum off the stop. Instead, they made one costly mistake after another.

First, All-Pro tight end Travis Kelce dropped a pass that would've been a big gain on third down. Then punter Tommy Townsend shanked a 29-yarder after a penalty forced him to kick again. The Bucs started at Kansas City's 38 instead of their 27.

Brady fired a strike to Gronkowski for a 17-yard TD and a 14-3 lead. Gronk hesitated before spiking the ball, waiting to make sure another flag on the play was against the sloppy Chiefs.

Mahomes drove the offense for a 34-yard field goal by Harrison Butker that cut it to 14-6, but Kansas City's defense fell apart in the final minute of the first half -- allowing 42 yards on two pass interference penalties. One against Mathieu in the end zone set up Brady's TD pass to Brown for a 21-6 halftime lead.

It was Brady who convinced his new team to give Brown a chance after the troubled former All-Pro came off suspension. His TD toss to Brown was his 50th of the season, including 10 in the postseason.

Mathieu took an unsportsmanlike penalty after the TD pass for getting into it with Brady as he ran to the sideline.

Leonard Fournette, like Brown an in-season addition, ran 27 yards untouched to extend Tampa's lead to 28-9. Arians pumped his fist after that score and pointed toward offensive coordinator Byron Leftwich, who made the call.

Last year, Mahomes rallied the Chiefs from a 10-point deficit in the fourth quarter against San Francisco and earned MVP honors in leading Kansas City to its first NFL championship in a half-century. But Tampa's pass rush gave him no chance in this one.

Shaq Barrett had one of three sacks on Mahomes, who spent most of the game trying to escape Jason Pierre-Paul, William Gholston and a relentless group.

"There was nothing that was gonna stop us from winning this game," Barrett said. "I knew we were going to keep the pressure up. Coach Bowles had a great game plan. We had the guys up there to make it work and we made it work, baby." 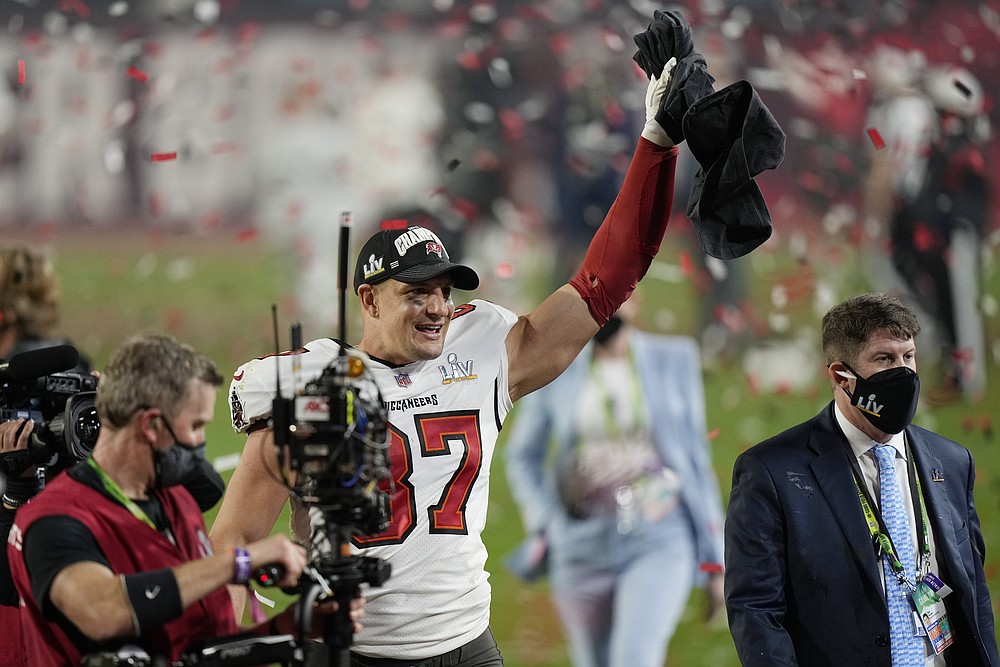 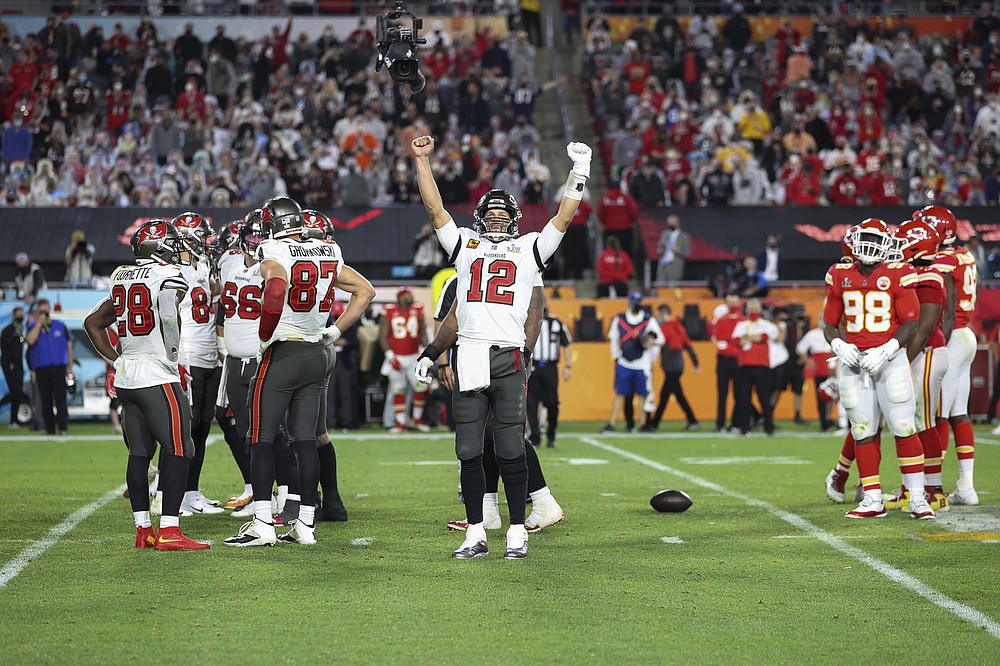 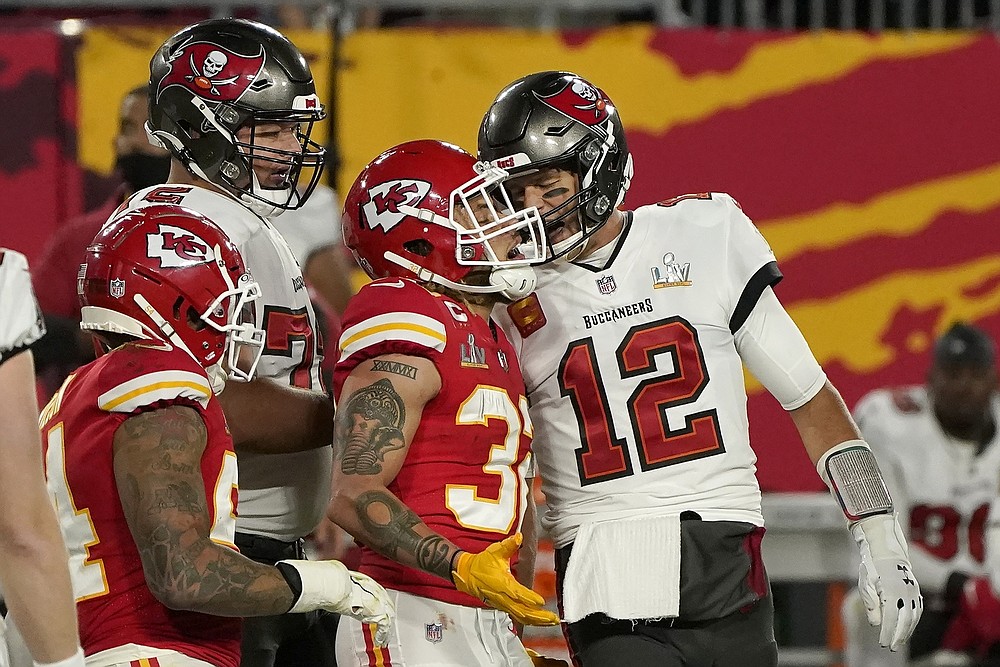 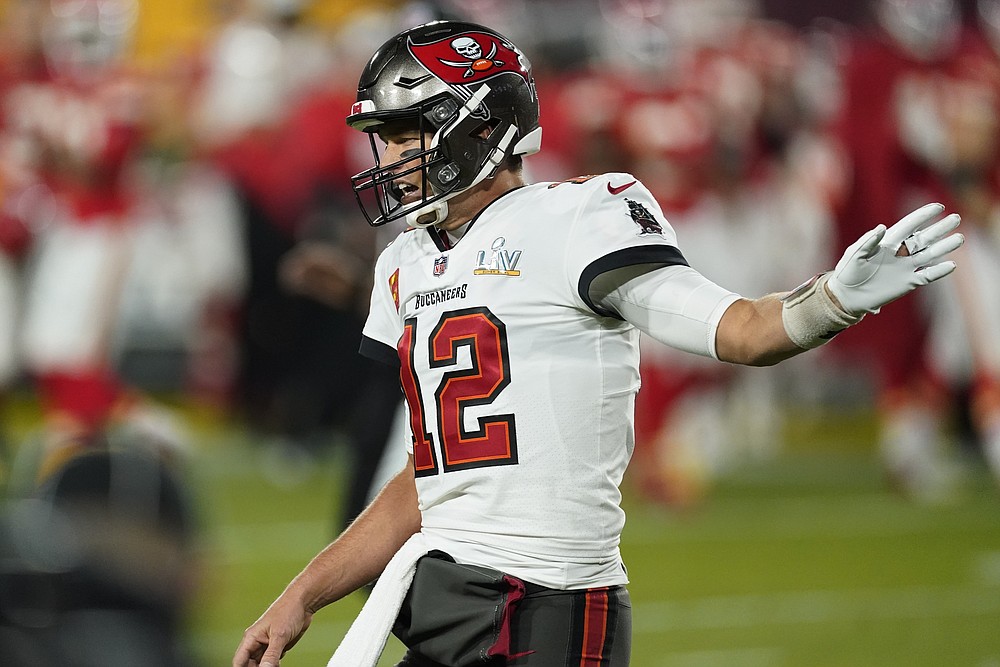 Tampa Bay Buccaneers quarterback Tom Brady reacts after getting stopped at the goal line against the Kansas City Chiefs during the first half of the NFL Super Bowl 55 football game Sunday, Feb. 7, 2021, in Tampa, Fla. (AP Photo/Ashley Landis) 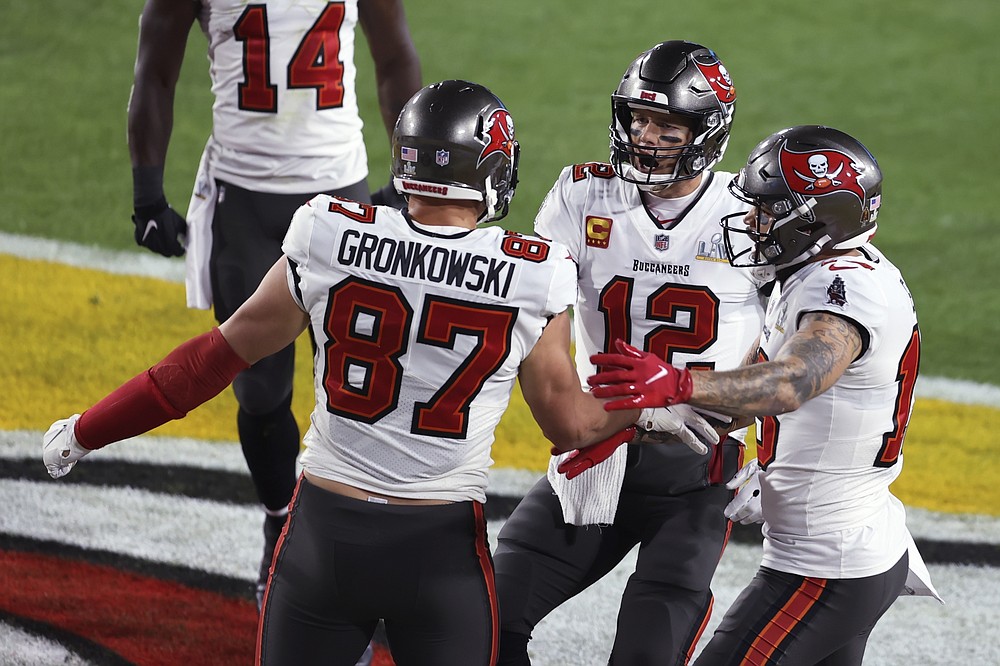 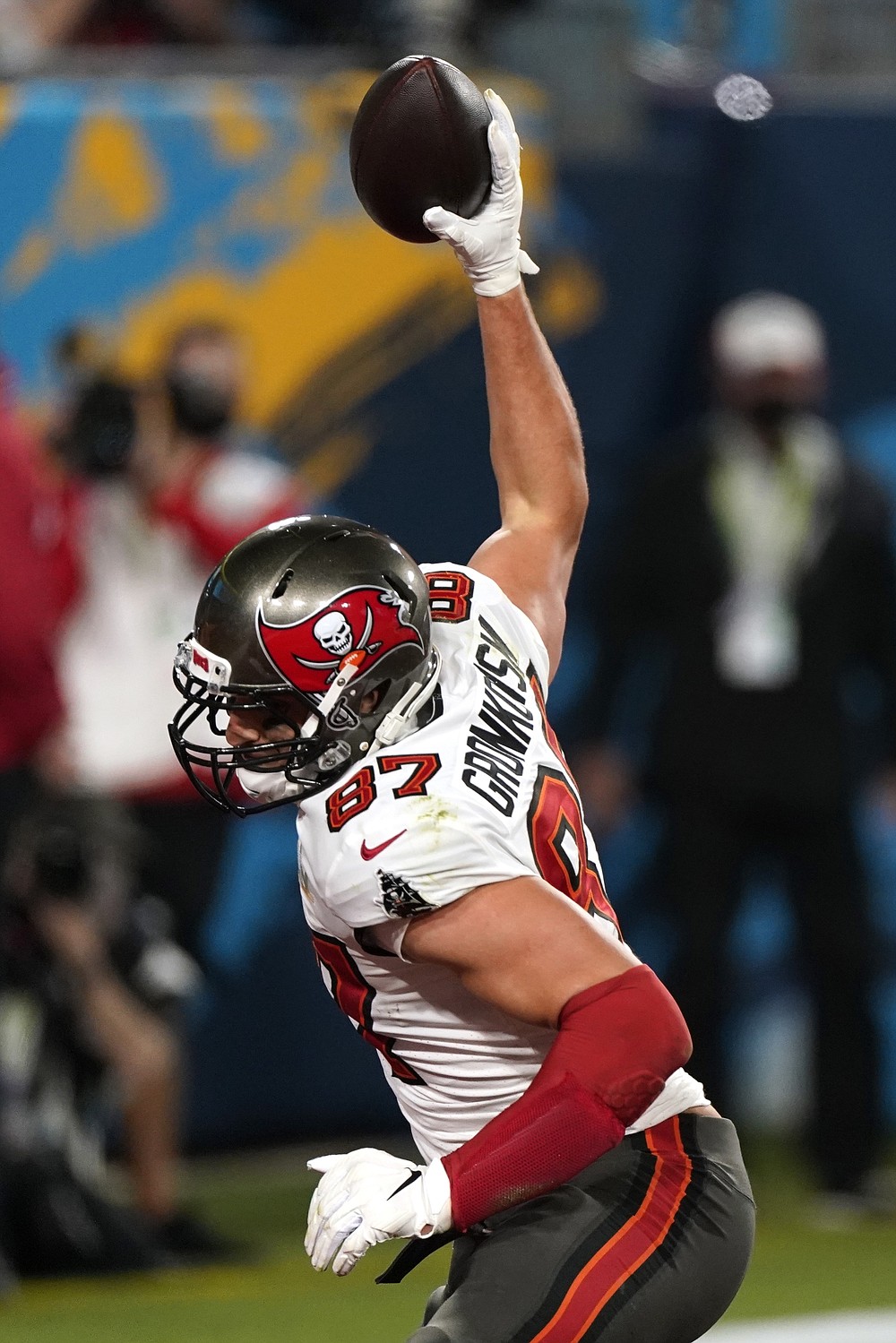 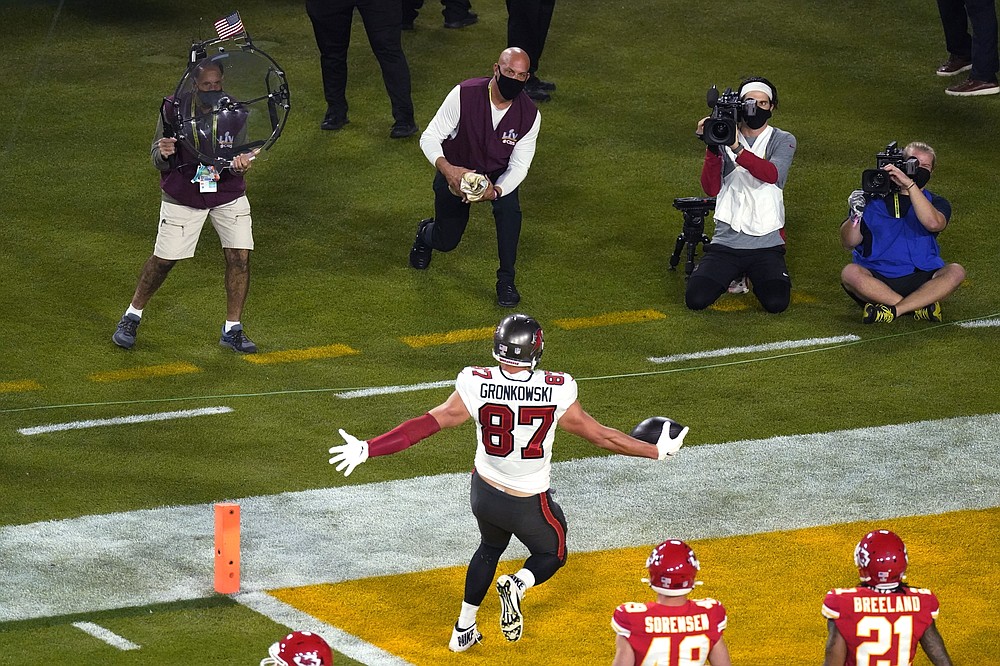 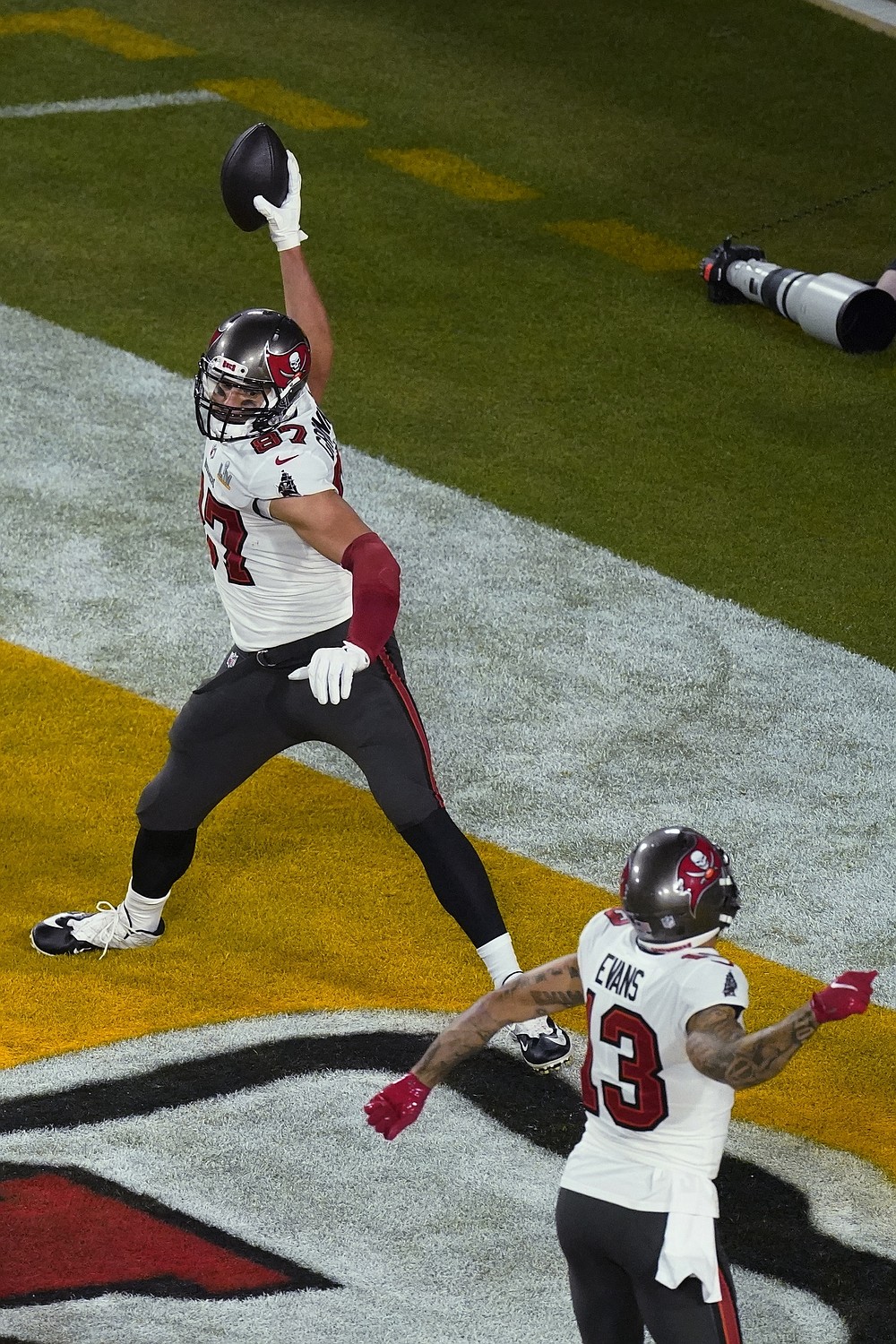 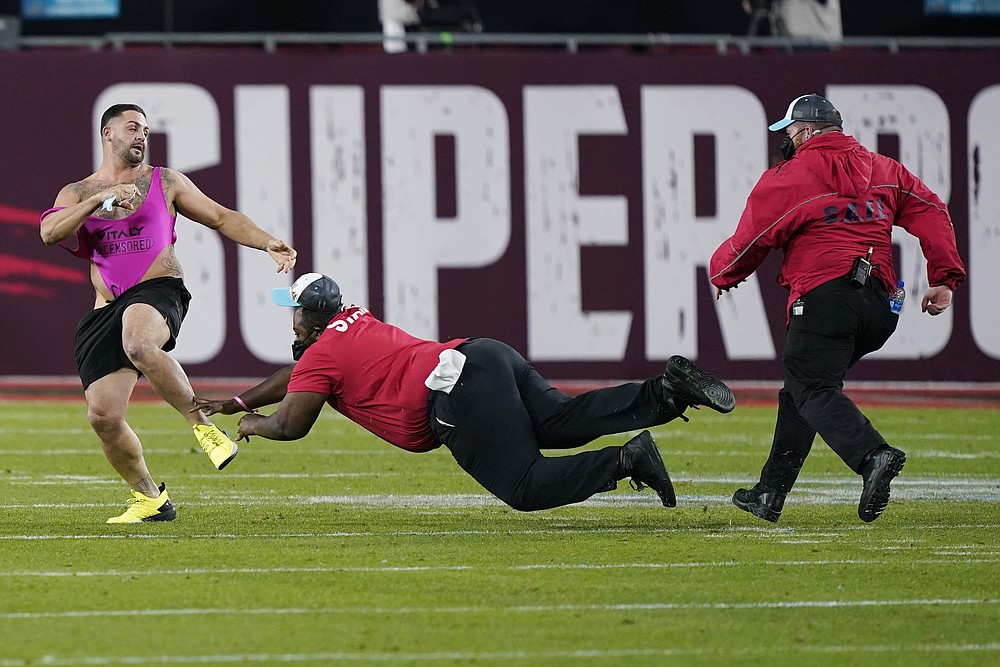 Security tries to grab a fan on the field during the second half of the NFL Super Bowl 55 football game between the Tampa Bay Buccaneers and the Kansas City Chiefs, Sunday, Feb. 7, 2021, in Tampa, Fla. (AP Photo/Mark Humphrey)
ADVERTISEMENT