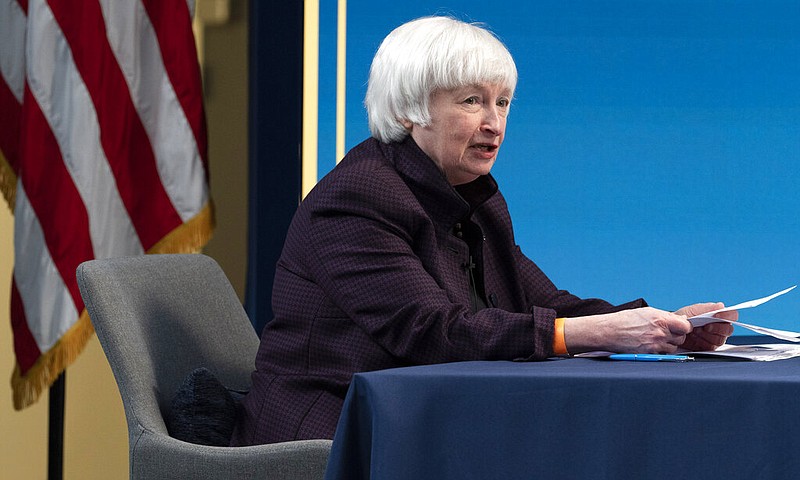 Treasury Secretary Janet Yellen speaks from the South Court Auditorium on the White House complex in Washington on Friday, Feb. 5, 2021, during a virtual roundtable with participants from Black Chambers of Commerce across the country to discuss the American Rescue Plan.

WASHINGTON -- Treasury Secretary Janet Yellen said Sunday that the country is still in a "deep hole" with millions of lost jobs but that President Joe Biden's $1.9 trillion relief plan could generate enough growth to restore full employment by next year.

House committees are set to start cobbling together Biden's coronavirus relief bill this week, although certain elements -- including income limits for stimulus checks -- remain under discussion, according to Yellen.

As part of their bill, House Democrats plan to propose boosting the child tax credit, now at a maximum of $2,000, to as much as $3,600 per child annually, according to information obtained Sunday by multiple news outlets.

The House is expected to pass a relief bill by the end of February, with the Senate to follow. Democrats want to get a relief package signed into law by mid-March, when enhanced unemployment benefits will expire if Congress doesn't act.

Republican senators argue that Biden's proposal is too expensive, and they cite criticism from Larry Summers, a treasury secretary under President Bill Clinton, that passage of the measure could run the risk of triggering runaway inflation. Summers also contended that Biden's plan would make less money available for other initiatives, such as improving the nation's infrastructure.

Yellen, a former Federal Reserve chairwoman, said the central bank has the tools to handle any potential inflationary threat. She said the urgent need now is to deal with the problems raised by the pandemic-induced recession: joblessness, lost small businesses and closed schools.

Biden and his team have argued that a big economic package is needed to avoid the mistakes made in 2009 when the Obama administration was unable to get increased support through Congress, resulting in a long, slow recovery after the 2008 financial crisis.

The government reported Friday that the economy only created 49,000 jobs in January after having lost jobs in December. Yellen said the recent jobs reports raised fears that the job market is stalling with 10 million people still unemployed and 4 million having dropped out of the labor market.

"We're in a deep hole with respect to the job market and a long way to dig out," Yellen said.

Citing a report from the Congressional Budget Office, Yellen said the unemployment rate could remain elevated for years to come and that it could take until 2025 to get unemployment back to 4%. The jobless rate stood at a half-century low of 3.9% a year ago before the pandemic hit.

She said that if Biden's relief package is approved, then the country could get back to full employment by next year.

"There's absolutely no reason why we should suffer through a long, slow recovery," Yellen said.

"We face a huge economic challenge here and tremendous suffering in the country. We have got to address that," Yellen said. "That's the biggest risk."

The House and Senate last week approved the legislation necessary to pass the relief package through a process known as reconciliation, which only requires 51 votes in the Senate. The Senate is split 50-50, with Vice President Kamala Harris the tie-breaking vote.

House Speaker Nancy Pelosi, D-Calif., has said she hopes to approve the specific budget details of the Biden proposal over the next two weeks, aiming to get the measure through Congress before the current unemployment benefits run out in mid-March.

Meanwhile, House Democrats are preparing to unveil the legislation that would send up to $3,600 per child to millions of Americans, as lawmakers aim to change the tax code to target child poverty rates.

The proposal would expand the child tax credit to provide $3,600 per child younger than 6 and $3,000 per child up to 17 over the course of a year, phasing out the payments for Americans who make more than $75,000 and couples who make more than $150,000. The 22-page draft provision, reported by The Washington Post and obtained by The New York Times, is expected to be formally introduced today as lawmakers race to fill out the contours of Biden's stimulus plan.

"The pandemic is driving families deeper and deeper into poverty, and it's devastating," said Rep. Richard Neal, D-Mass., chair of the Ways and Means Committee and one of the champions of the provision. "This money is going to be the difference in a roof over someone's head or food on their table. This is how the tax code is supposed to work for those who need it most."

The credits would be split into monthly payments from the IRS beginning in July, based on a person's or family's income in 2020. Although the proposed credit is only for a year, some Democrats said they would fight to make it permanent, a sweeping move that could reshape efforts to fight child poverty in America.

The one-year credit appears likely to garner enough support to be included in the stimulus package, but it will also have to clear a series of tough parliamentary hurdles because of the procedural maneuvers Democrats are using to muscle the stimulus package through, potentially without Republican support.

With the House Democratic leadership aiming to have the stimulus legislation approved on the chamber floor by the end of the month, Congress moved last week to fast-track Biden's stimulus plan even as details of the legislation are still being worked out. Buoyed by support from Democrats in both chambers and the lackluster January jobs report, Biden has warned that he plans to move ahead with his plan regardless of whether Republicans support it.

Republicans, who have accused Biden of abandoning promises of bipartisanship and have raised concerns about the nation's debt, have largely balked at his plan because of its size and scope after Congress approved trillions of dollars in economic relief in 2020.

But the child tax credit could provide an opportunity for some bipartisan support, since Sen. Mitt Romney, R-Utah, introduced a similar measure that would send payments of up to $1,250 per month to families with children. Romney's proposal, intended to encourage Americans to have more children while reducing child poverty rates, would distribute payments through the Social Security Administration and offset costs by eliminating other government safety net spending.

"If you're President Biden and you're serious about having a bipartisan -- working together with people on the other side, bringing people together in unity, he has the opportunity to do it," Sen. Pat Toomey, R-Pa., said on CNN's "State of the Union."

Toomey also cited the warnings raised by Summers that the $1.9 trillion plan was too large.

"Larry Summers is a liberal Democrat ... in favor of big government spending, and he has said this is way too much," said Toomey said.

The provision expanding the child tax credit is among the legislative proposals intended to address the inequities exacerbated by the pandemic and to help families weather the nation's faltering economy. Researchers at Columbia University found that Biden's overall stimulus proposal could cut child poverty in half in 2021 because of the expansion of the child credit, as well as other changes to tax credits and expansions of unemployment and food assistance benefits.

[Video not showing up above? Click here to watch » https://www.youtube.com/watch?v=Hnj-AZpzbNs]

"The moment is here to make dramatic cuts in child poverty that could improve the lives and the future of millions of children," Rep. Rosa DeLauro, D-Conn., chairwoman of the House Appropriations Committee, said Sunday. She said she would push to make the credit permanent.

The relief package has been criticized for setting the cutoff for $1,400 direct payments too high, allowing wealthier Americas to collect the payments. Yellen said the administration was willing to negotiate with lawmakers, but she did not specify what that threshold should be.

Biden said in a CBS interview Friday that he believed his push to raise the federal minimum wage to $15 per hour from $7.25 probably would have to be removed in order to meet Senate rules on budget reconciliation.

But Sen. Bernie Sanders, chairman of the Senate Budget Committee, said on "State of the Union" that committee lawyers were trying to build the case that a wage increase would not violate those rules.

"People on top are doing phenomenally well," said Sanders, I-Vt. "And yet we have literally tens of millions of Americans working for starvation wages."

Information for this article was contributed by Martin Crutsinger and Alan Fram of The Associated Press; by Emily Cochrane and Alan Rappeport of The New York Times; and by Erica Werner and Jeff Stein of The Washington Post. 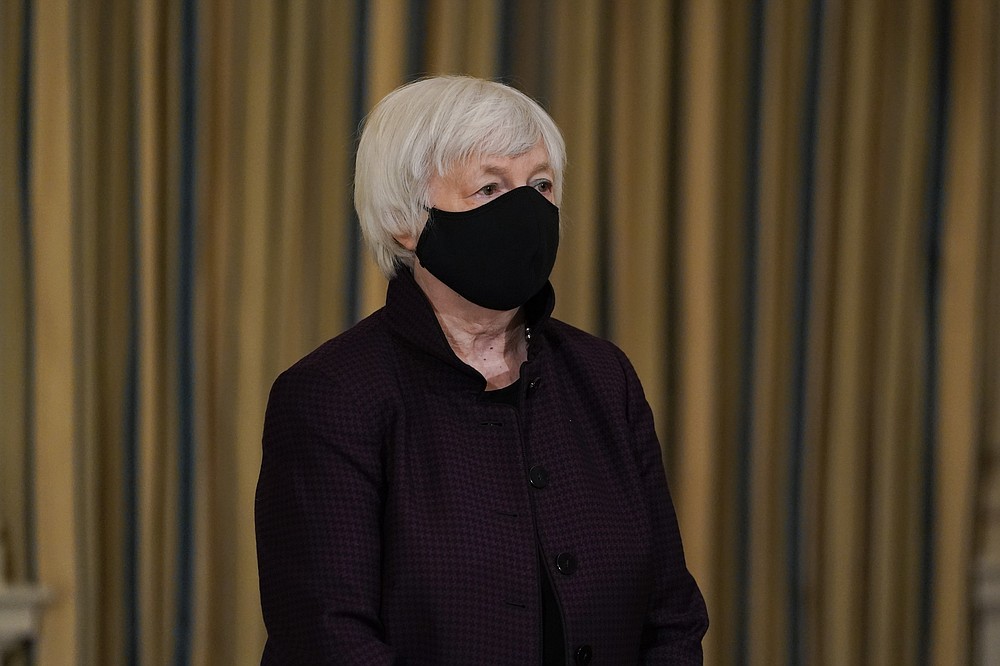 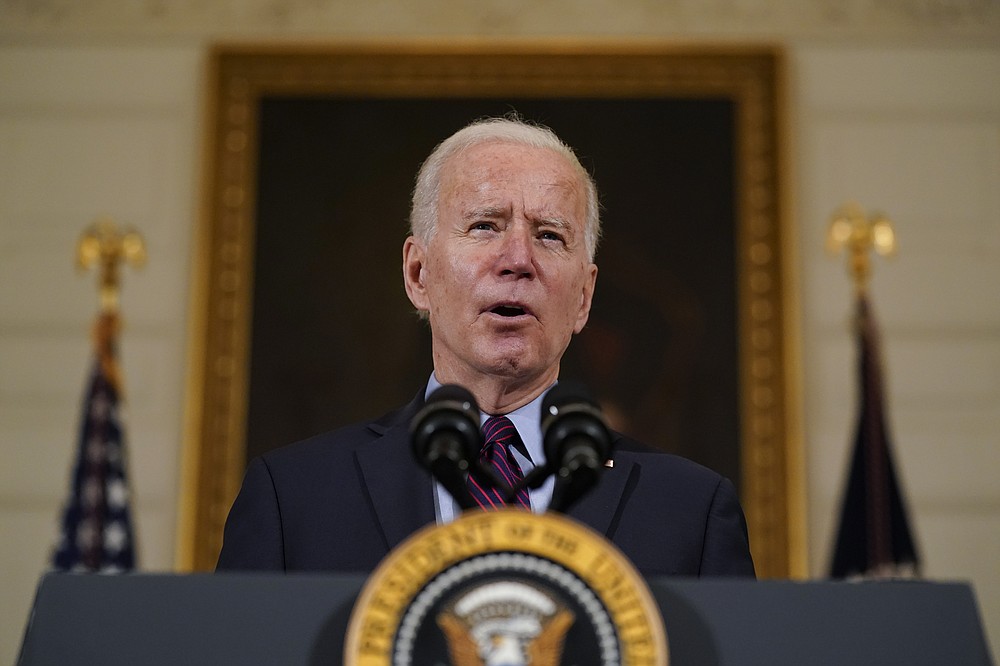