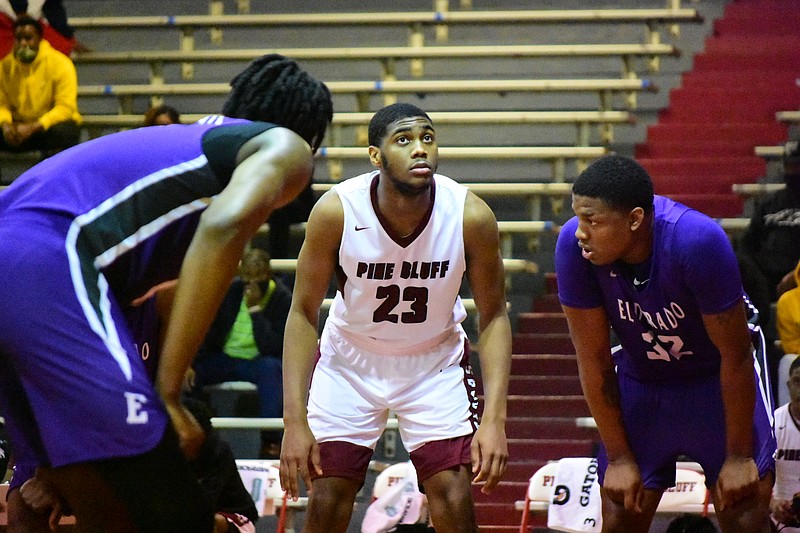 Jordon Harris (23) of Pine Bluff, pictured at home against El Dorado on Jan. 28, 2021, scored 21 points on the road against the Wildcats on Friday, Feb. 5. (Pine Bluff Commercial/I.C. Murrell)

The Zebras played on back-to-back days for the second time in as many weeks and came away with a 52-39 win over next-door conference rival White Hall in McFadden Gymnasium on Saturday. Less than 24 hours earlier, Pine Bluff had defeated El Dorado 66-49.

Pine Bluff improved to 9-3 and 7-0 in the 5A-South. The team began its conference slate last month after a 36-day layoff because of covid-19 issues.

Nine Zebras entered the scoring column, led by Courtney Crutchfield's 14 points and Jalen Tatum's 12. Tatum was just coming off a season high of 27 points in a packed gymnasium at El Dorado.

"Jalen Tatum continues to play well, matching his season high of 27 points, double-digits in rebounds, and he continues to guard our opponent's best player," Zebras Coach Billy Dixon said. Tatum has scored in double figures in each of the past five games.

Against White Hall, Pine Bluff opened up a 15-13 lead after the first quarter and was ahead 27-18 at halftime. An 18-2 third quarter for the Zebras all but put the game out of the Bulldogs' reach.

This was the second rivalry game in as many days for White Hall (5-15, 1-8), which had lost at home to Sheridan on Friday.

Against El Dorado, Jordon Harris scored 21 points, including 10 in a fourth quarter in which the Zebras outscored the Wildcats 26-13. Harris made five two-hand baseline dunks.

"Jordon does so much for this team that doesn't show up in the scoring column," Dixon said.

At Pine Bluff, Lilly Hood scored nearly half of her team's points, and the Lady Bulldogs (10-11, 2-6 in 5A-South) picked up the road victory coming off a rivalry loss to Sheridan.

Hood had 20 points Saturday, one more than she had against Sheridan, while Camille Wallace added 10 and Kamiyah Drumgoole eight for White Hall.

Pine Bluff's teams have three sets of back-to-back dates remaining, starting today at Hot Springs. The girls game will tip off at 6 p.m., with the boys to follow.

Pine Bluff is set to host Lake Hamilton on Tuesday and visit White Hall on Friday.