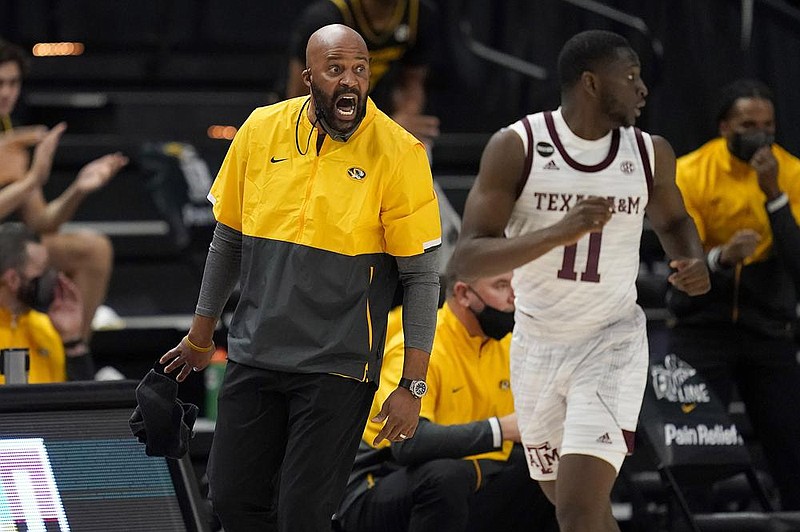 FROM TOP TO BOTTOM

The NCAA instituted in 2018-19 a rating system called the NET Rankings, which took the place of the Ratings Percentage Index. An acronym for NCAA Evaluation Tool, the NET rankings take into account game results, strength of schedule, game location, scoring margin, net offensive and defensive efficiency and the quality of wins and losses.

The Tigers lead the SEC with a 5-3 record against Quad 1 competition, including Saturday's escape vs. Alabama at home. The Razorbacks, with a 1-5 record in Quad 1 games, would like some revenge after their laggard showing in an 81-68 home loss to Mizzou, their first loss of the season and their only loss at Walton Arena.

Wins at Rupp Arena for Tennessee's Rick Barnes, the only active coach with that many

Consecutive points scored by Tennessee, twice, after trailing 58-48 at Kentucky on Saturday

"I thought it was a great performance, even the last whatever, three-plus minutes of the game. I told our guys I'm real proud of them. I know it's a long season, but oftentimes you have to celebrate these type of moments because they don't come often." -- Missouri Coach Cuonzo Martin after beating No. 10 Alabama on Saturday

"They also have a coach that's not used to losing 12 games in three years. I'm trying to stay positive. I'm trying to hold them accountable. I'm trying to continue to teach. I'm never going to stop, quit on this team. I'll give them everything I have." -- Kentucky Coach John Calipari after the Wildcats dropped to 5-12 on Saturday

"I realize our fan base loves it. They do. I get it, and we've got a lot more we can do." Tennessee Coach Rick Barnes on the Vols' winning back-to-back seasons at Kentucky's Rupp Arena

FAYETTEVILLE -- Missouri made the biggest noise in the SEC on Saturday with a statement victory that jumped the Tigers to No. 10 in Monday's Associated Press poll after they held off previous No. 10 Alabama 68-65 in a topsy-turvy game at Mizzou Arena.

The Tigers led by as many as 22 points in the second half before Alabama, which had been unbeaten in SEC play at 10-0, stormed back with a 21-2 run to pull within 66-65. The Crimson Tide even had a couple of chances to take the lead in the final minute on a pair of Herbert Jones shots, but he missed one and was rejected by former Van Buren standout Mitchell Smith on the other with four seconds remaining.

Missouri (13-3, 6-3) pulled within three games of the Crimson Tide for the SEC lead with its third win over a top 10 opponent.

"You can't overlook the fact it was a hard-fought game against a great, great team. A team, no doubt in my mind, if healthy, has every shot to win it all. Because they can score it, they can handle it, they can drive the ball, they can shoot it, have skill and experience and great coaching."

The last time Missouri beat three Associated Press Top 10 opponents in the regular season came in 2011-12 against No. 3 Baylor, No. 8 Kansas and No. 6 Baylor.

Missouri has no time to relax. On Wednesday, the Tigers travel to suddenly resurgent Ole Miss, which defeated No. 11 Tennessee at home and completed a sweep of Auburn with an 86-84 road win on Saturday. Then Missouri returns home Saturday to host Arkansas, which will take a three-game SEC winning streak into Kentucky tonight.

Tennessee is having a huge season with intermittent strange losses. The Vols' latest outcome was a huge positive, as they rallied for an 82-71 win at Kentucky on Saturday by overcoming a 58-48 deficit with 12 minutes to play.

Tennessee now has won back-to-back games at Rupp Arena for the first time.

"It means we've come up here with some good basketball teams and good players," Tennessee Coach Rick Barnes said. "A year ago we were down 16 with 11 minutes to go and won, and that's been one of the greatest comebacks I've been a part of.

"It's fun watching them play like that. I just love the way they got locked into the game. They were oblivious to everything else going on other than on the court, but I'm excited for our guys and excited for our fan base."

"It wasn't like they were jacking threes and going nuts. They just went to wherever they wanted to on the court and either went into your body and shot or jumped over and you shot."

Ole Miss had been struggling offensively before blowing up at Auburn on Saturday to win 86-84 in overtime to sweep the Tigers.

Guard Devontae Shuler provided the dagger, a jumper from 20 feet with 0.2 seconds remaining for the winning points. Shuler missed the final shot of regulation that could've been the game winner, but he was encouraged by Coach Kermit Davis' advice prior to overtime.

"Coach told me to shoot the next one," Shuler said. "He told me the opportunity was going to happen again."

Ole Miss overcame an 11-point deficit to down No. 11 Tennessee 52-50 at home on Wednesday.

The Rebels, who are 5-6 in the SEC, have a chance to move up in the next couple of weeks with a pair of games against Missouri sandwiched around games at South Carolina and at home against Mississippi State.

There already have been seven two-game sweeps between SEC teams, with league-leader Alabama topping the charts in that department.

The Crimson Tide have sweeps over LSU and Kentucky. The two-game takedown of Kentucky is Alabama's first since 1989.

Ole Miss has been on the right and wrong ends of sweeps, taking out Auburn twice but falling in home and road games against Georgia.

Auburn has fallen in sweeps to both Arkansas and Ole Miss.

Other sweeps are Florida over Vanderbilt and LSU over Texas A&M.

Two other completed series wound up in splits, the most interesting being the Missouri vs. Tennessee series. The Vols opened conference play with a 73-53 road rout in Columbia, Mo., but the Tigers avenged that loss with a 73-64 win in Knoxville, Tenn., on Jan 23. Auburn split a pair with Georgia, and each of those teams also won at the other's home arena.

The strangest pairing has been Texas A&M vs. Vanderbilt, with two games in that series already being postponed due to covid-19 issues.

The guards Smith and Shuler shared SEC player of the week honors, while Johnson was the league freshman of the week.

Smith, a 6-3 guard from Evansville, Ind., averaged 22 points, 7.5 rebounds and 4.5 assists in wins over Kentucky and Alabama, including a season-high 26 against the Crimson Tide.

Johnson, a 6-5 guard from Shelbyville, Tenn., averaged 19 points, 4.0 rebounds and 3.5 assists in two games, including a 9-of-16 shooting performance in a win at Kentucky.

Former Van Buren standout Mitchell Smith made a huge defensive play for Missouri on Saturday to thwart an Alabama rally.

Smith blocked a shot from underneath by Alabama's Herbert Jones with four seconds remaining to preserve Missouri's 66-65 lead. Had Jones' shot gone down, the Tide would have completely erased a 64-44 second-half deficit in less than seven minutes.

"Dru [Smith] came over, doing great help, and made Herb shot-fake, and I just saw my opportunity to jump up and block it," Mitchell Smith said. "It went according to plan, and I got a block, so it's all good over here."

Smith's block caromed off the backboard to teammate Xavier Pinson, who was immediately fouled.

"You always dream about stuff like that," Smith said. "Just another play to help my team win."

"I haven't had a chance to look at it on film, so I don't wan't to say, but I thought the kid landed on his back," Oats said about Dru Smith, who also was defending Jones, when asked Saturday about the key play. "I saw it live.

"I thought it was a foul live. Obviously, though, when you're coaching, you're hoping all the calls go your way. Sometimes they don't. Tough call to lose the game on."

If coronavirus issues subside for both Florida and Texas A&M this week, they will resume their schedules against each other Saturday at 7:30 p.m. at the ExacTech Center in Gainesville, Fla.

The Aggies have not played since a 68-61 win at Kansas State in the Big 12/SEC Challenge on Jan. 30. The Aggies missed consecutive games at home against Vanderbilt and on the road at Arkansas, and their home game against Georgia on Wednesday already has been postponed.

Florida came back from a standout 85-80 win at No. 11 West Virginia in the Big 12/SEC Challenge and lost 72-66 at home to South Carolina in one of the biggest head-scratchers of the SEC season.

The Gators' Saturday game at LSU was postponed and so was their Wednesday game at Tennessee.

Georgia and Tennessee will play a rescheduled game on Wednesday in Knoxville, Tenn., due to the other postponements.