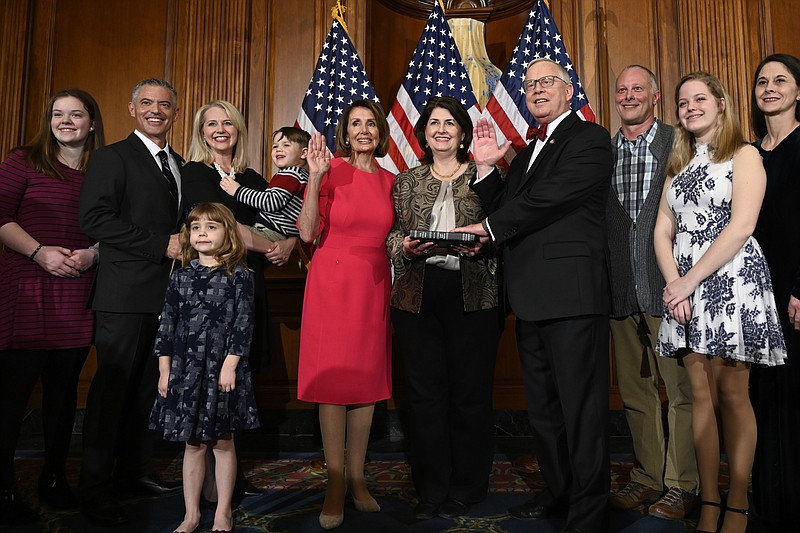 FILE - In this Jan. 3, 2019 file photo, House Speaker Nancy Pelosi of Calif., poses during a ceremonial swearing-in with Rep. Ron Wright, R-Texas, fourth from right, on Capitol Hill in Washington during the opening session of the 116th Congress. Wright, the Texas Republican who had battled health challenges over the past year including lung cancer treatment died Sunday, Feb. 7, 2021, more than two weeks after contracting COVID-19, his office said Monday, Feb. 8. He was 67. (AP Photo/Susan Walsh, File)

AUSTIN, Texas -- Republican Rep. Ron Wright of Texas, who had lung cancer and was hospitalized after testing positive for covid-19 last month, has died, his office said Monday. He was 67.

Wright died Sunday, spokesman Matt Langston said. He said he didn't know the cause of death, but the two-term congressman and his wife, Susan, had been admitted to a Dallas hospital in the previous two weeks after contracting covid-19.

Wright announced shortly after being sworn in for a new term that he had tested positive for the coronavirus. He was also hospitalized last year over treatment for lung cancer complications.

"Despite years of painful, sometimes debilitating treatment for cancer, Ron never lacked the desire to get up and go to work, to motivate those around him, or to offer fatherly advice," his office said in a statement.

Wright is the first sitting member of Congress to die after contracting covid-19. In December, an incoming Republican member of the U.S. House, Luke Letlow of Louisiana, died of complications related to the virus only days before the 41-year-old would have been sworn into office.

Wright had said he tested positive for covid-19 after coming into contact with an infected person, and he described his early symptoms as minor and said he would quarantine.

Langston said Wright never received a vaccination and was believed to have contracted the virus in Washington after he returned in early January for the swearing-in ceremony. Another Texas member of Congress, Republican U.S. Rep. Kay Granger, also announced that she had tested positive around that time.

Langston said Susan Wright was discharged from the hospital before her husband's death.

"He emulated the very best of America, and we were fortunate to have had the opportunity to call him a colleague and a friend," House Republican leader Kevin McCarthy said.

President Joe Biden called Wright "a fighter who battled bravely against both cancer and covid-19, diseases that our nation will continue working tirelessly every day to defeat in the memory of all those we have lost." Similar tributes rolled in, including from House Speaker Nancy Pelosi, who mentioned the broader toll of the pandemic.

"As we grieve Congressman Wright's passing, Members of Congress are united in sorrow and pray for the families and loved ones of the over 460,000 Americans who have been killed by the vicious coronavirus. Each death is a tragedy that breaks our hearts and demands strong, urgent action," Pelosi said in a statement.

Wright was among the 147 Republicans in Congress who voted to reject Biden's electoral victory. He was a longtime city councilman in Arlington, Texas, and won reelection to his House seat by 9 percentage points last year.

Wright had represented the 6th Congressional District in the Dallas-Fort Worth area since 2018. A special election will be called to fill his seat. 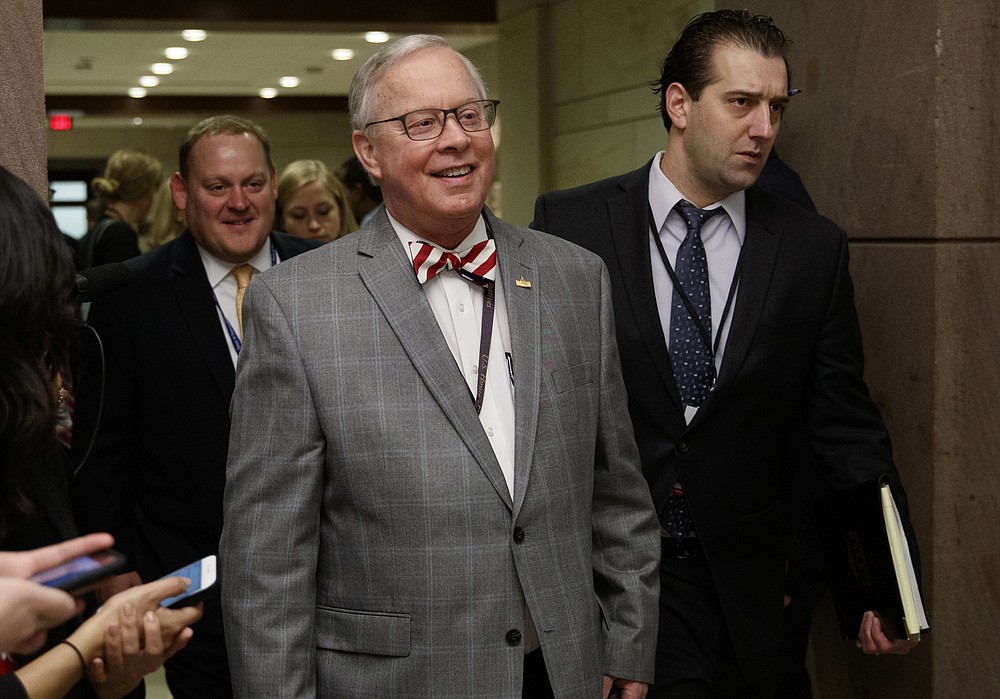 FILE - In this Nov. 15, 2018 file photo, U.S. Rep. Ron Wright, R-Texas, walks to a session during member-elect briefings and orientation on Capitol Hill in Washington. Wright, the Texas Republican who had battled health challenges over the past year including lung cancer treatment died Sunday, Feb. 7, 2021, more than two weeks after contracting COVID-19, his office said Monday, Feb. 8. He was 67. (AP Photo/Carolyn Kaster, File)
ADVERTISEMENT