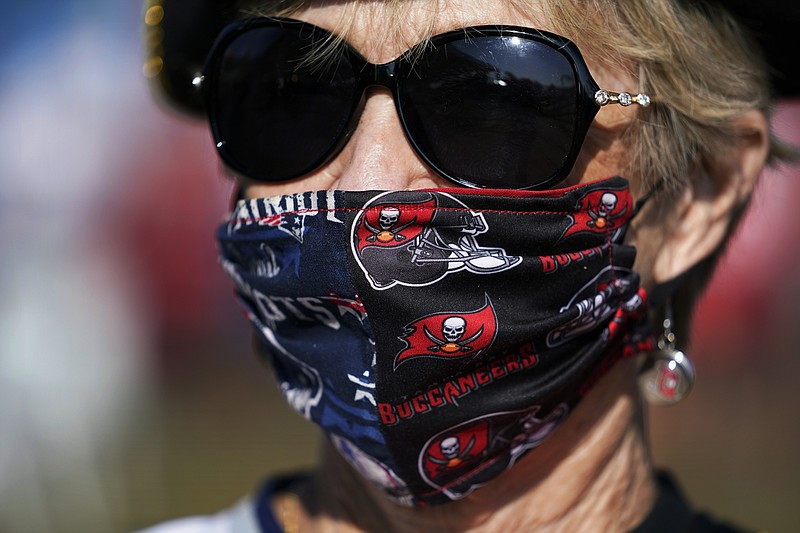 The drive to vaccinate Americans against the coronavirus is gaining speed and newly recorded cases have fallen to their lowest level in three months, but authorities worry that Super Bowl celebrations will fuel new outbreaks.

More than 4 million more vaccinations were reported over the weekend, a significantly faster clip than in previous days, according to the Centers for Disease Control and Prevention.

Nearly one in 10 Americans have now received at least one shot. But just 2.9% of the U.S. population has been fully vaccinated, a long way from the 70% or more that experts say must be inoculated to conquer the outbreak.

Newly confirmed infections have declined to an average of 117,000 a day, the lowest point since early November. That is a steep drop from the peak of nearly 250,000 a day in early January.

The number of Americans in the hospital with covid-19 has also fallen sharply to about 81,000, down from more than 130,000 last month.

Health officials say the decline in hospitalizations and new cases most likely reflects an easing of the surge that was fueled by holiday gatherings, and perhaps better adherence to safety precautions.

The drop-off in new cases comes as fewer tests for the virus are being reported. But experts say the decline in cases is real. It is more pronounced than the apparent slowdown in testing, and it is accompanied by other encouraging signs.

[Video not showing up above? Click here to watch » https://www.youtube.com/watch?v=J1YN89CMRis]

"We are seeing a real decline because it's been sustained over time and it's correlated with decreasing hospitalizations," said Dr. Amesh Adalja, an infectious disease specialist at Johns Hopkins University. "That tells you that there does seem to be something afoot."

The question, he said, is whether the lower numbers can be sustained as new variants of the virus take hold in the United States. President Joe Biden has announced plans to spend billions to increase rapid testing by the summer.

Federal officials are warning states not to relax restrictions on dining out and other social activities.

"We have yet to control this pandemic," Dr. Rochelle Walensky, head of the CDC, said Monday.

The sight of fans, many without masks, celebrating the Super Bowl in the streets, in sports bars and at game-watching parties has sparked worries of new outbreaks.

"This isn't how we should be celebrating the Super Bowl," the mayor of St. Petersburg, Fla., Rick Kriseman, tweeted after a maskless party was hosted by Rapper Curtis "50 Cent" Jackson in a hangar at the city's airport, not far from where the Tampa Bay Buccaneers won the title.

"It's not safe or smart. It's stupid. We're going to take a very close look at this, and it may end up costing someone a lot more than 50 cent."

Police in Charleston, S.C., issued citations to nearly 50 people for not wearing masks in public during Sunday's game.

Meanwhile, evidence is mounting that having covid-19 may not protect against getting infected again with some of the new variants. People also can get second infections with earlier versions of the coronavirus if they mounted a weak defense the first time, new research suggests.

How long immunity lasts from natural infection is one of the big questions in the pandemic. Scientists still think reinfections are fairly rare and usually less serious than initial ones, but recent developments around the world have raised concerns.

In South Africa, a vaccine study found new infections with a variant in 2% of people who previously had an earlier version of the virus.

In Brazil, several similar cases were documented with a new variant there. Researchers are exploring whether reinfections help explain a recent surge in the city of Manaus, where three-fourths of residents were thought to have been previously infected.

In the United States, a study found that 10% of Marine recruits who had evidence of prior infection and repeatedly tested negative before starting basic training were later infected again. That work was done before the new variants began to spread, said one study leader, Dr. Stuart Sealfon of the Icahn School of Medicine at Mount Sinai in New York.

"Previous infection does not give you a free pass," he said. "A substantial risk of reinfection remains."

Reinfections pose a public health concern, not just a personal one. Even in cases where reinfection causes no symptoms or just mild ones, people might still spread the virus. That's why health officials are urging vaccination as a longer-term solution and encouraging people to wear masks, keep physical distance and wash their hands frequently.

"It's an incentive to do what we have been saying all along: to vaccinate as many people as we can and to do so as quickly as we can," said Dr. Anthony Fauci, the U.S. government's top infectious disease expert.

"My looking at the data suggests ... and I want to underline suggests ... the protection induced by a vaccine may even be a little better" than natural infection, Fauci said.

Doctors in South Africa began to worry when they saw a surge of cases late last year in areas where blood tests suggested many people had already had the virus.

Until recently, all indications were "that previous infection confers protection for at least nine months," so a second wave should have been "relatively subdued," said Dr. Shabir Madhi of the University of the Witwatersrand in Johannesburg.

Scientists discovered a new version of the virus that's more contagious and less susceptible to certain treatments. It now causes more than 90% of new cases in South Africa and has spread to 40 countries including the United States.

Madhi led a study testing Novavax's vaccine and found it less effective against the new variant. The study also revealed that infections with the new variant were just as common among people who had covid-19 as those who had not.

"What this basically tells us, unfortunately, is that past infection with early variants of the virus in South Africa does not protect" against the new one, he said.

Walensky suggested Monday that testing people for the coronavirus before U.S. domestic flights could help reduce transmission, as she urged state and local leaders to maintain steps to limit covid-19's spread.

Requiring travelers to receive a negative coronavirus test before boarding domestic flights could be "another mitigation measure," Walensky said Monday during a news briefing. She didn't say whether the CDC will move forward with the policy, which the Biden administration is actively considering.

Transportation Secretary Pete Buttigieg told Axios the discussion is ongoing and the decision will be "guided by data, by science, by medicine, and by the input of the people who are actually going to have to carry this out."

Separately, Texas will likely partner with the Federal Emergency Management Agency to open two vaccination "super sites" in Dallas and Houston, and more could be on the way, Gov. Greg Abbott said Monday.

Abbott tweeted those vaccine locations would be open every day and operate for eight weeks, handling up to 6,000 shots per day. The governor said adding more sites is possible, but his office did not immediately release further details, including whether that meant Texas would get more vaccine doses or if those sites would pull vaccine from other areas.

The Texas news comes a week after California partnered with FEMA to open two mass vaccination centers under President Joe Biden's push to create 100 such sites nationwide in 100 days.

According to state health officials, nearly 2.5 million Texans have received at least one dose of vaccine, and nearly 780,000 are fully vaccinated. As of Sunday, Texas had 9,652 covid-19 patients in hospitals and a death toll of 38,643.

Also Monday, the head of a House oversight panel renewed its investigation into political interference in the nation's coronavirus response, releasing new allegations of meddling in scientists' work.

Rep. James Clyburn, D-S.C., chairman of the House select subcommittee on the coronavirus crisis, released emails from a science adviser to former President Donald Trump that he said showed how the administration worked to weaken guidance on who should be tested for coronavirus. Clyburn also cited evidence that Trump appointees sought to boost access to unproven treatments for coronavirus that were favored by the president.

The panel "is continuing these critical investigations ... in order to understand what went wrong over the last year and determine what corrective steps are necessary to control the virus and save American lives," Clyburn wrote to White House Chief of Staff Ron Klain and acting Health and Human Services Secretary Norris Cochran, in letters shared with The Washington Post.

Clyburn said the Trump administration had blocked the subcommittee's inquiries, noting that Health and Human Services officials "failed to fully comply with two subpoenas and at least 20 document requests."

Clyburn's latest allegations focus on emails sent last year by then-scientific adviser Paul Alexander, a Trump appointee who repeatedly clashed with career scientists -- and called for deliberately infecting younger Americans with the virus, arguing that it would speed so-called herd immunity -- before being fired in September. Alexander did not immediately respond to an email request for comment.

In one of the newly released emails, Alexander defended a contentious decision by the CDC to abruptly revise its guidance to reduce the number of people getting tested for coronavirus.

Under that revised guidance issued in August, CDC said that Americans who had been in close contact with infected people but did not have symptoms "do not necessarily need a test." According to Alexander, the White House supported the decision because the prior strategy was posing a risk to efforts to reopen the economy -- a major priority for Trump in the run-up to last year's election.

"Testing asymptomatic people to seek asymptomatic cases is not the point of testing," Alexander wrote in an Aug. 27 email obtained by the panel, adding that "all this accomplishes is we end up quarantining asymptomatic, low-risk people and preventing the workforce from working."

The CDC in September reversed its guidance on asymptomatic testing, after a torrent of complaints from public health experts who said it was necessary to uncover hidden cases of the virus, which were helping to drive the epidemic. Officials at colleges such as Duke University cited such testing as a crucial element in schools' ability to reopen last year.

The panel also released emails in which Alexander repeatedly appealed to health officials to increase access to hydroxychloroquine, the anti-malaria drug touted by Trump as a coronavirus treatment despite evidence it was ineffective. Amid White House pressure, the Food and Drug Administration authorized the drug in March to be used for patients hospitalized with coronavirus, before revoking the authorization in June and subsequently warning about the drug's risks. Trump complained about the FDA's reversal, and appointees like Alexander urged the agency to reconsider.

In his letter to Health and Human Services, Clyburn calls for documents sent by at least 46 current and former health department officials, ranging from Trump appointees like former Secretary Alex Azar, to career civil servants working on the coronavirus response. The Trump administration last year mostly limited its document releases to emails sent by Alexander, said a subcommittee aide familiar with the probe.

Clyburn on Monday also said that the administration "failed to provide a meaningful response" to his panel's requests for documents on the Trump administration's vaccination strategy.

The White House said it was reviewing the panel's requests.

"We appreciate Chairman Clyburn and the Select Subcommittee's diligent work to help ensure an effective, science-driven pandemic response on the part of the United States government," said spokesman Kevin Munoz. "The White House is focused on vaccinating the U.S. population efficiently and equitably and slowing the spread of covid-19."

Information for this article was contributed by Adam Geller, Matthew Perrone, Ricardo Alonso-Zaldivar, Andrew Dalton, Jeffrey Collins and Marilynn Marchione of The Associated Press; by Angelica LaVito and Josh Wingrove of Bloomberg News; and by Dan Diamond of The Washington Post. 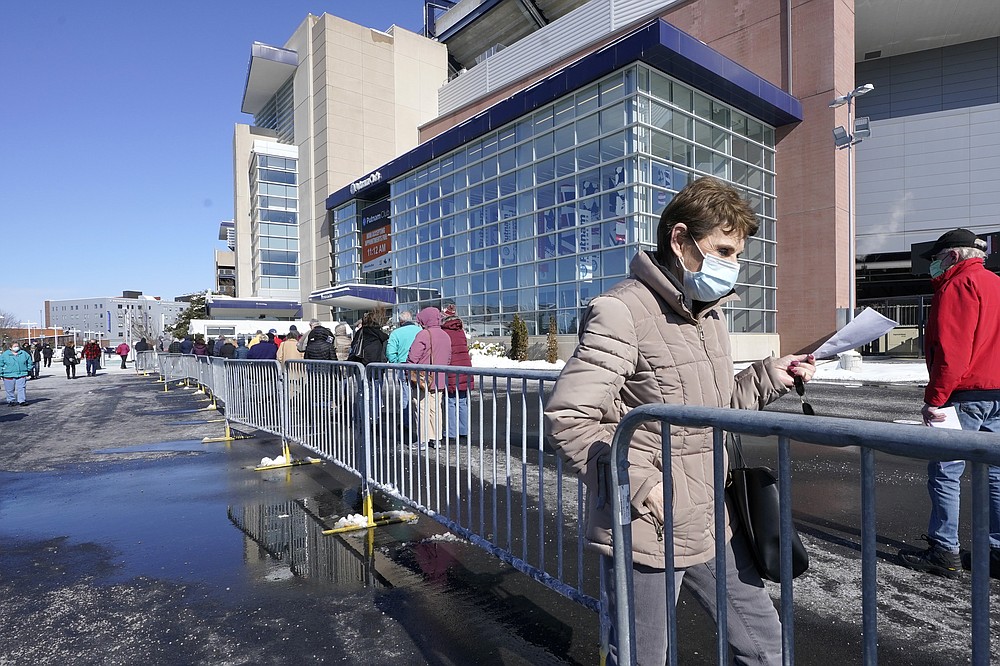