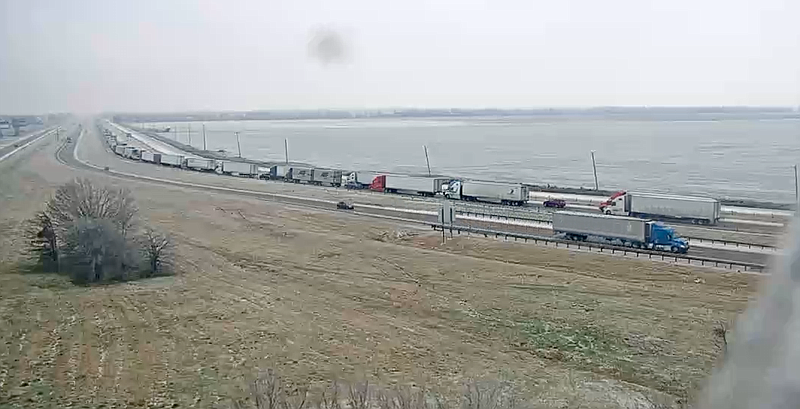 Ice obstructs part of a camera overlooking traffic on Interstate 40 in Crittenden County on Thursday in this screenshot of video provided by the state Department of Transportation.

Crashes on Interstate 40 in east Arkansas have blocked lanes and stalled traffic, according to the state Transportation Department.

A crash reported on eastbound I-40 near mile marker 234.1 just west of Forrest City temporarily blocked the inside and left shoulder lanes, according to an automated message by the agency. The department reported the crash cleared shortly after 2:10 p.m.

Also in St. Francis County, a crash reported on westbound I-40 near mile marker 261.3, about 9 miles south of Earle, blocked the outside and right shoulder lanes. The crash has been cleared, the agency reported at 2:20 p.m.

Traffic in both directions northeast of Interstate 40 was impacted as a result of a crash in Lonoke County, according to transportation officials.

A crash occurred around 10:45 a.m. 3.1 miles west of Lonoke, according to the Arkansas Department of Transportation. The wreck was cleared by 11:39 a.m.

Traffic cameras show all westbound lanes of I-40 in St. Francis County were blocked late Thursday morning as a result of a crash that happened near mile marker 254.3, according to ARDOT. That crash was cleared as of 2:07 p.m.

Dave Parker, a spokesperson for ARDOT, said both lanes of I-55 south of Blytheville in Mississippi County were closed this morning because a truck slid on ice and took out a utility pole, so utility lines are down in the area. That crash was cleared as of 11:17 a.m.

Officials have warned that current winter weather could create a coat of ice on roadways.

A state Department of Transportation map showed slush, ice patches and ice on roads throughout the eastern part of the state. Real-time traffic updates and road conditions can be seen at idrivearkansas.com/.

Read more about today's weather conditions and updates at arkansasonline.com/211weather/.

This story has been updated. It was originally published at 12:03 p.m.