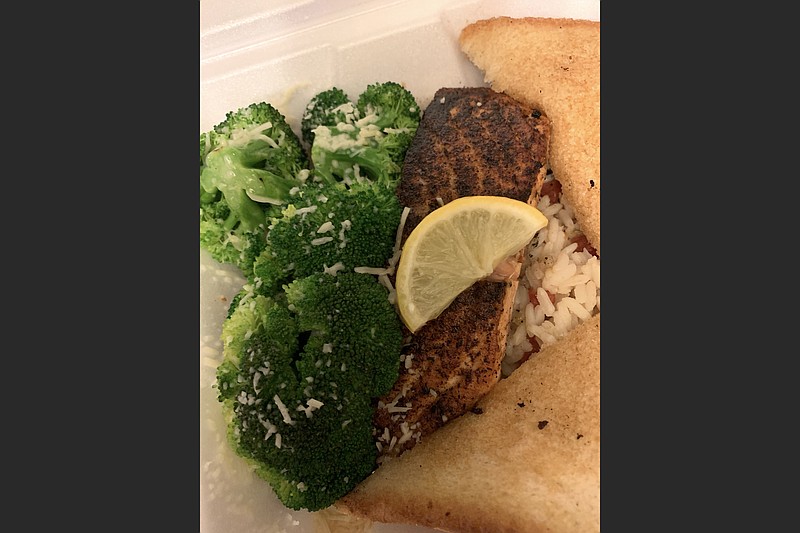 There's a whole lot of hibachi grilling going on hereabouts, between long-standing, full-service Japanese restaurants with dining-room teppanyaki grills and a number of quick-service hibachi operations that have been springing up in the last couple of years.

We have included one of each in this current grab-and-go survey. We also grabbed and got more traditional dinner, lunch and brunch offerings. As usual, we're avoiding chains (though we bent the rules a little this week), and we're sticking to a reasonable radius for keeping hot meals hot. And we pay up front for all we consume.

We had been avoiding Big Whiskey's because we had considered it part of a chain. Except that when we looked up the chain, which includes restaurants in Missouri, Alabama, Oklahoma (Tulsa) and Arkansas (Fayetteville, Siloam Springs and Bentonville) on its website, this one wasn't on the list. So, if it is part of a chain, we're making an exception. So there.

We were delightfully surprised by our 8-ounce chunk of Atlantic salmon, blackened just enough to show up but not to dramatically affect the flavor of the fish, which was moist, flaky and delicious. It came with long-grain rice dressed up with some seasoning and chunks of what appeared to be tomatoes, which also surprised us but not enough for us to finish it, and a large portion of very surprising and delicious steamed broccoli lightly dusted with grated cheese, plus a slice of buttered Texas toast.

HOW IT WENT: The website offers an online ordering system but it doesn't appear to be working at the moment. At any rate, we dropped in on a sleepy weeknight and ordered and paid at the bar. It took about 15 minutes for our food to come out of the kitchen.

HOW IT'S GOING: There were two occupied tables in the restaurant, one there when we entered, and one couple that entered while we were there. It must usually be busier, because a bartender complained at least twice in our hearing about how un-busy it was. There were no other to-go orders. 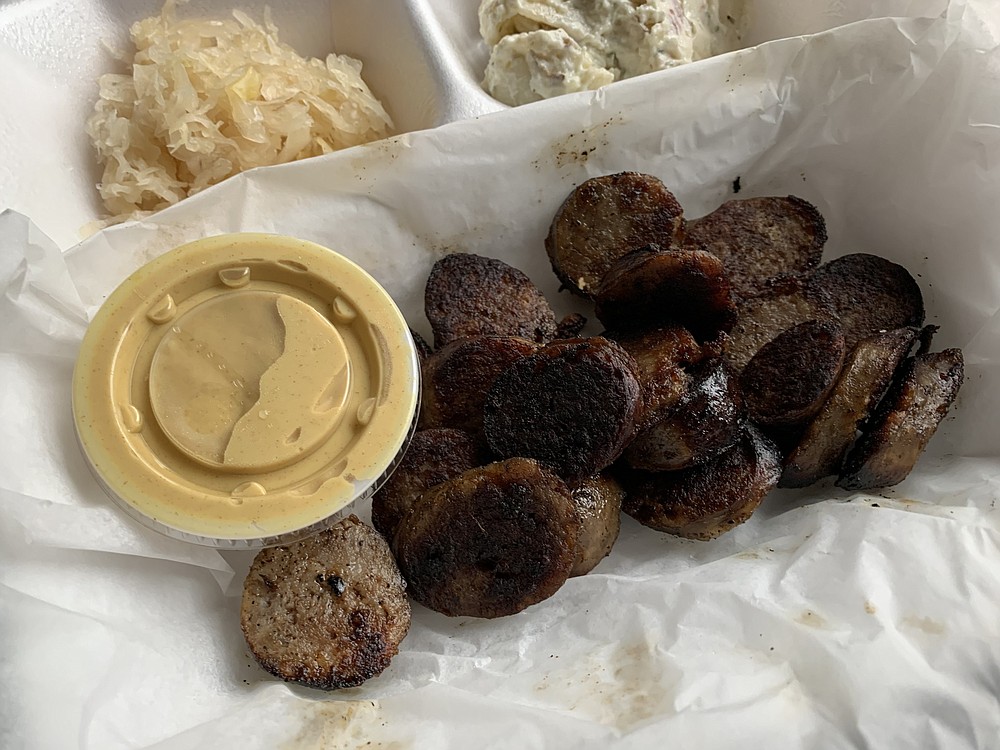 Rather than two whole bratwursts, the Double Brat Plate from the taproom at North Little Rock's Diamond Bear Brewing Co. consisted of sliced brats, with sauerkraut and a baked potato salad on the side. (Arkansas Democrat-Gazette/Eric E. Harrison)

We got a surprise here, too, when we opened the foam clamshell container: Instead of the two bratwursts we were expecting (the menu just says seasoned brats), we got a pile of half-inch-thick bratwurst slices, more or less grill-toasted to crispness, and even tastier when dipped into the more-than-adequate supply of Dijon mustard (served in a separate plastic cup). In the two other segments of the clamshell: some tangy sauerkraut and a quite-good bacon-y baked potato salad. Our only disappointment: Our rather sweet house-brewed root beer lacked fizz. (A regular brat plate, which we presume involves only one brat, either whole or in slices, is $9.)

HOW IT WENT: The taproom is open, though because the front door of the shop, through which we have always entered in the past, was locked, we had to come in through the patio. We ordered and paid at the bar; it took only about seven minutes for our food to come out of the semi-open kitchen, where we observed one maskless staff member while the other wore his mask below his chin. The single front-of-house staff member — waitress, hostess, bartender — wore her mask below her nose.

HOW IT'S GOING: There were four occupied tables in the taproom. Ours was the only to-go order. 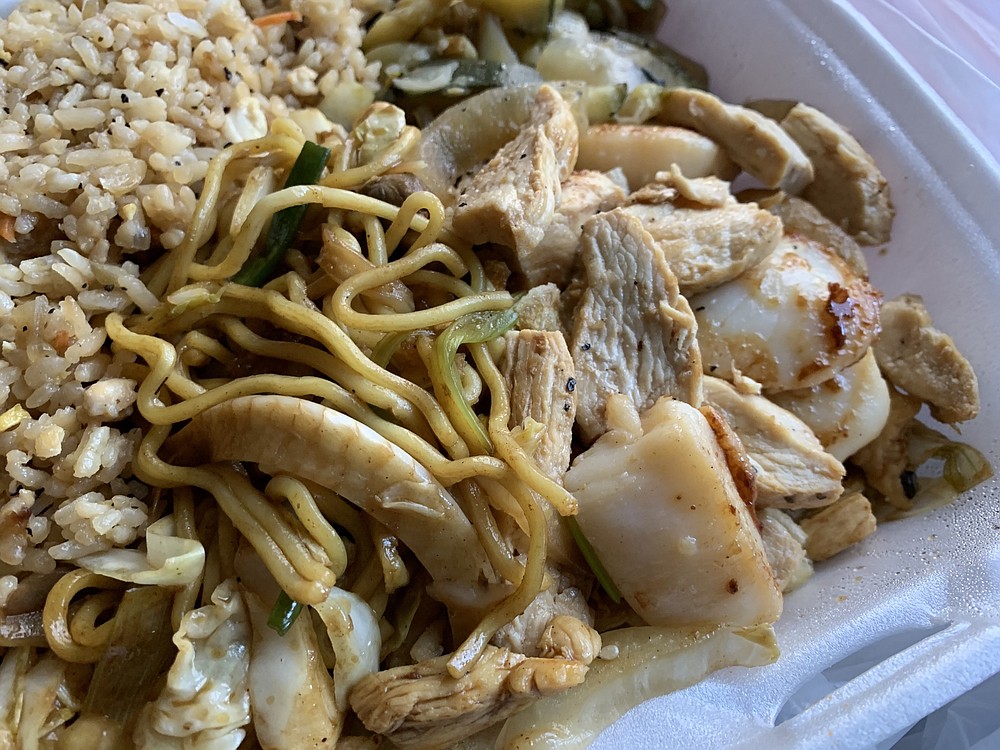 North Little Rock's Benihana is, and isn't, part of a chain. It's listed as a location on the chain's website but it's locally owned and operated by the people who own and operate the hotel where it's located. We put two items together for our lunch duet — scallops and soba noodles — which somehow also included a portion of hibachi-grilled chicken (and we're not sure how) that was flavorful but a bit dry. Everything was crammed into the to-go foam clamshell; the noodles — probably the tastiest part of the dish — bumped up against the prodigious order of flavorful fried rice but the veggies were unappetizing. Our sushi combo consisted of a perfectly ordinary California roll and five fresh but uninspiring pieces of nigiri (fish on rice): red snapper, tuna, salmon, squid and shrimp.

HOW IT WENT: We ordered and paid online. When we got our copy of the ticket we discovered there was a $6.38 service charge — just under 18% — that we don't recall seeing mentioned would be applied as we were ordering. So we don't feel guilty about not adding a tip. Benihana handles its to-go orders in an area completely separate from the restaurant that would normally be used, as we recall, as a private dining room. Our order was ready when we got there, within the half-hour we were promised.

HOW IT'S GOING: There were several to-go orders awaiting pickup and the phone rang more or less constantly while we were there. 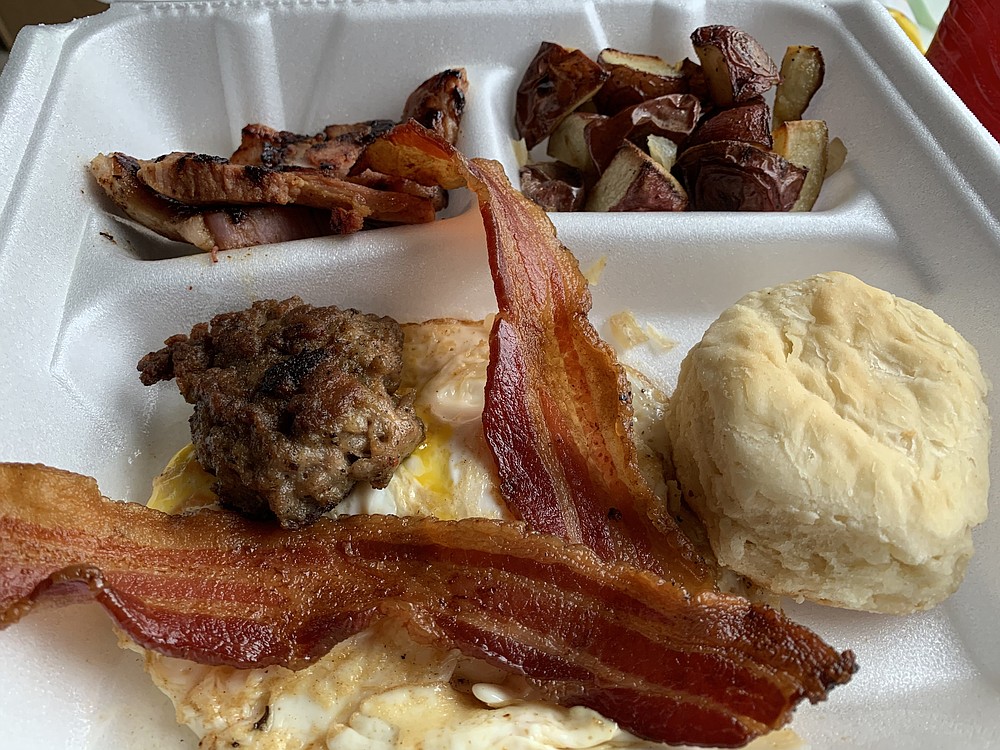 The Kitchen Sink from The Library Kitchen and Lounge brunch menu includes eggs, sausage, bacon, some pieces of country ham, a biscuit, potatoes and a waffle. (Arkansas Democrat-Gazette/Eric E. Harrison)

We had forgotten, perhaps, how few of the Library's lunch/dinner options we'd found interesting when we reviewed the place almost exactly a year ago. Those options appealed even less when we were assessing the menu online, so instead we opted to try something for Sunday brunch. The aptly named Kitchen Sink offers a bit of everything: two eggs (over medium, please), a waffle, two pieces of bacon, a single sausage patty, some pieces of country ham, a biscuit and breakfast potatoes (fried up with onions). We would have enjoyed our food better if it had been hot (see below) but we came out ahead flavor-wise. The eggs weren't unduly salted, the sausage — a coarse-ground patty so irregularly shaped that it had to have been pattied by hand — was just spicy enough. The bacon wasn't as crispy as we like, but it was cooked well enough. The ham was a little on the salty side but not bad. The biscuit was fresh. And the waffle, while soft, was fairly sweet, almost sweet enough to consume without syrup (also see below).

HOW IT WENT: Not all that well. We ordered by phone and were told it'd take 15 minutes. We got there in exactly 15 minutes and paid at the bar, and waited another 15 minutes beyond that. Did the kitchen not start our order before we got there? That might be a safe bet. Or, to be charitable, they might have been just swamped by in-house orders. Anyway, once our order did come out of the kitchen, it cooled on the bar for a few minutes before the very busy bartender could get it bagged — and that required a trip back into the kitchen for a black plastic sack, napkins and plasticware. At which point she discovered the kitchen staff hadn't included syrup for the waffle, so it was back to the kitchen, which took another couple of minutes, for that. It's probably no surprise, therefore, that, adding in an 8-minute trip back to our dining space, the sausage, bacon and particularly the eggs were giving up their last tiny vestige of warmth, and the waffle, which we saved for last, was by then downright chilly.

HOW IT'S GOING: While brunch at nearby Cache is on hiatus, this is one of a very few brunch options in or around the River Market. There were at least half-a-dozen occupied tables; there were no other to-go orders. 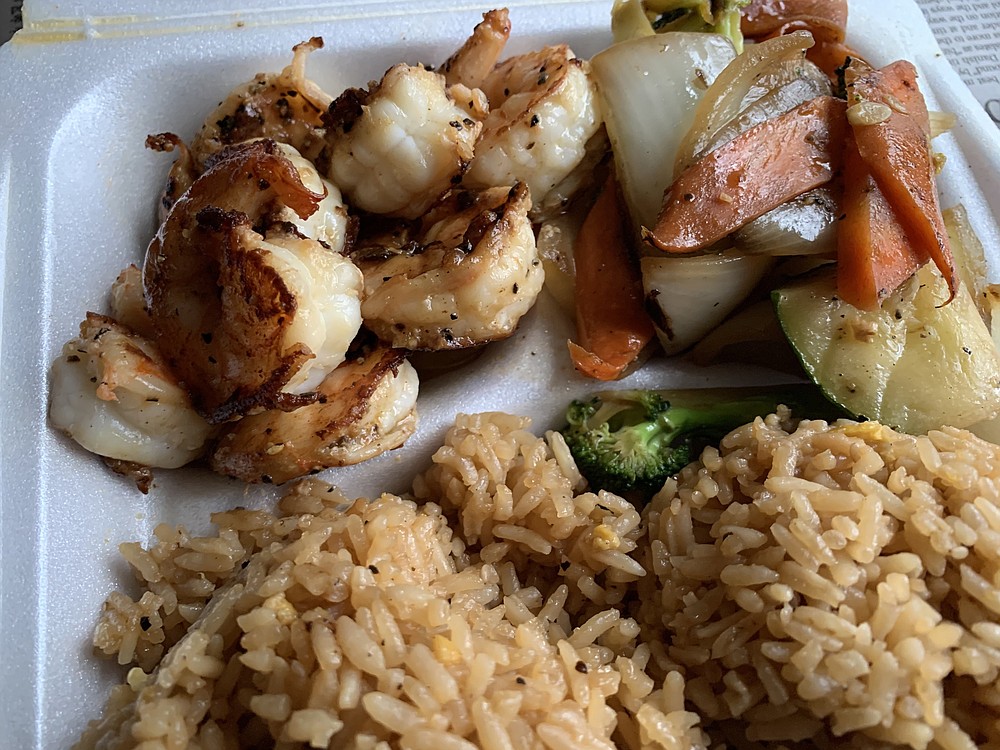 Our previous experience with this quick-serve place, part of a mini-chain with outlets in southwest Little Rock and North Little Rock's Lakewood Village, wasn't so enjoyable — a hibachi dinner of dry chicken. But this time it was much better — a good quantity of moist, firm grilled shrimp served with a pile of hibachi-grilled vegetables (carrots, zucchini and onion) and more tasty fried rice than we could consume. Our shrimp dumplings were a little chewy but otherwise worth the moderate price.

HOW IT WENT: We ordered and paid at the counter. We had about a 12-minute wait for our food to come out.

HOW IT'S GOING: There were three other to-go customers. Nobody was dining in.