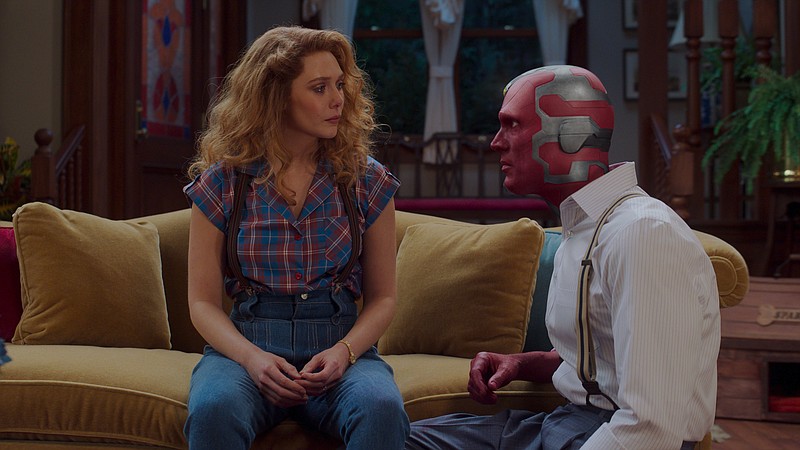 Wanda (Elizabeth Olsen) has some explaining to do with Vision (Paul Bettany) before the arrival of a surprise guest on “WandaVision.” (Marvel Studios/Disney Plus)

What does "WandaVision" plus X equal?

Marvel Studios's hit Disney Plus series went from strange to OMG in an instant with a stunning cameo at the end of the show's fifth episode. But when it comes to Quicksilver, Wanda's (Elizabeth Olsen) long-lost, supposed-to-be-dead twin brother who appeared in the final moment, things always happen fast.

Which Quicksilver? The answer to that question was the real surprise.

A speedy Quicksilver tutorial before we dive into what we think we saw. From their Marvel comic book origins in 1964′s "X-Men" No. 4 to their arrival on the big screen in 2015′s "Avengers: Age of Ultron," Wanda and Pietro Maximoff have been known for two things: reality-altering witchcraft and super-speed. The Quicksilver who made his debut alongside Olsen in "Age of Ultron" (played by Aaron Taylor-Johnson) died at the end of that movie at the hands of the film's titular villain.

Meanwhile, in Fox's X-Men movie universe, a year before "Age of Ultron" hit theaters, Evan Peters debuted as the scene-stealing Quicksilver in "X-Men: Days of Future Past."

But now that Disney and Fox have merged, Marvel Studios has brought the X-Men "home" and has the rights to use their characters any way they want. Many have assumed that Marvel Studios would just start over fresh with the X-Men, and for good reason. Hugh Jackman's Wolverine was killed off in "Logan" and Jackman has hung up his claws. And the last few "X-Men" films Fox has released, from "Apocalypse" to "Dark Phoenix," have been duds.

The truth is that despite the first two "X-Men" films essentially giving birth to this current era of superhero entertainment in the early 2000s, the rise of Marvel Studios into a Hollywood power killed Fox's ability to make X-Men movies that matter. Once fans saw the Avengers assembled onscreen, they became the definitive Marvel cinematic experience, not the X-Men. But Fox shouldn't feel too bad — the same thing happened to Sony/Columbia's Spider-Man movies. Sony eventually reached out for help from Marvel Studios to save the Spidey brand. Like Thanos, it was just inevitable.

Which brings us back to the Quicksilver that was knocking on Wanda's door. Wanda had been missing her twin brother throughout the season, setting up a possible reunion in the alternate reality she has created for herself in "WandaVision," where she has proven to be immensely powerful. But when the door opens, it's not Taylor-Johnson's Quicksilver. It's Peters.

So what is going on here?

This could very well be how we are introduced to the X-Men's mutants in the Marvel Cinematic Universe. Or, because so much of WandaVision is deception and we know Wanda is not 100% in control of things, it could all be a trick. Or it could be something bigger.

We know that Olsen will be a major part of 2022′s Doctor Strange sequel "Doctor Strange in the Multiverse of Madness," the key world being "multiverse," as in multiple realities potentially combining. Perhaps that is what's happening right now in WandaVision.

So why bring back an actor from Fox's X-Men movie world if a Marvel Studios rebranding for the X-Men was seemingly in order?

Well, not so fast.

The thrill may be gone from the X-Men films until their eventual Marvel Studios revival, but there will always be a need for speed and no one has done super-speed on film better than Peters as Quicksilver. The only thing more unbelievable than his blazing fast arrival in "Days of Future Past" was that he topped that moment in "Apocalypse" while running to the 80s hit "Sweet Dreams."

Those radar gun-breaking moments from Peters are the one thing Fox's X-Men movies can say they did better than Marvel Studios. And kudos to Kevin Feige and Co. for recognizing Peters' Quicksilver was worth keeping around (at least for now) and using as a potential doorway to Marvel Studios mutantdom.

If only one Quicksilver was going to get a second chance at cinematic life, Marvel Studios made the right choice.