RESTAURANT TRANSITIONS: It's chicken going 'back' to ex-Angus 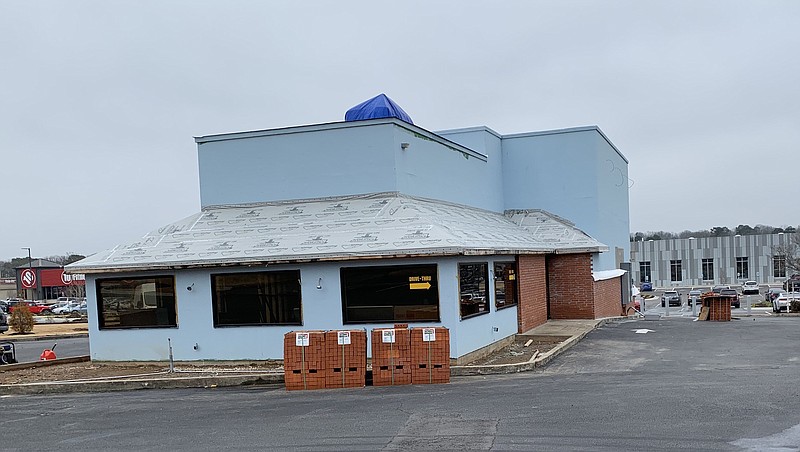 We now know at last what is going into the building at 10907 N. Rodney Parham Road, Little Rock, from which Black Angus was forced to decamp this time last year: A recent building permit filing reveals that Rodney Parham Chicken Inc., of which David Bubbus is the company's incorporator/organizer and Jessica Erin Bubbus is the vice president, is spending $400,000 on the site, where large quantities of bricks are currently piled that will apparently be applied to the exterior. If the name "David Bubbus" is familiar, it's because he's also the head honcho for David's Burgers. No timeline yet on when it will open.

You will recall, by the way, that Black Angus reopened at its pre-Rodney Parham location at 5100 W. Markham St., Little Rock. And in a bit of irony: Do you remember what the previous occupant of that Rodney Parham building served before Black Angus moved in 30-plus years ago? That's right, chicken. It was an outlet of the now-defunct Kenny Rogers' Roasters chain.

It's a question somebody should have probably asked, but didn't, when the announcement came last year of the ownership change at McClard's Bar-B-Que, 505 Albert Pike, Hot Springs. However, that question has now been answered: McClard's is now open on Sunday, 11 a.m.-8 p.m. Confirmation appears on the Facebook page (facebook.com/McClardsBBQ) — "Whether you're sitting down for a spread or grabbing to-go for the game, we'll be O-P-E-N on Sundays starting February 7!" — and on the website, mcclards.com/contact-mcclards-bbq.htm. For the rest of the week: 11 a.m.-7 p.m. Tuesday-Thursday, 11 a.m.-8 p.m. Friday-Saturday. The phone number is (501) 623-9665. 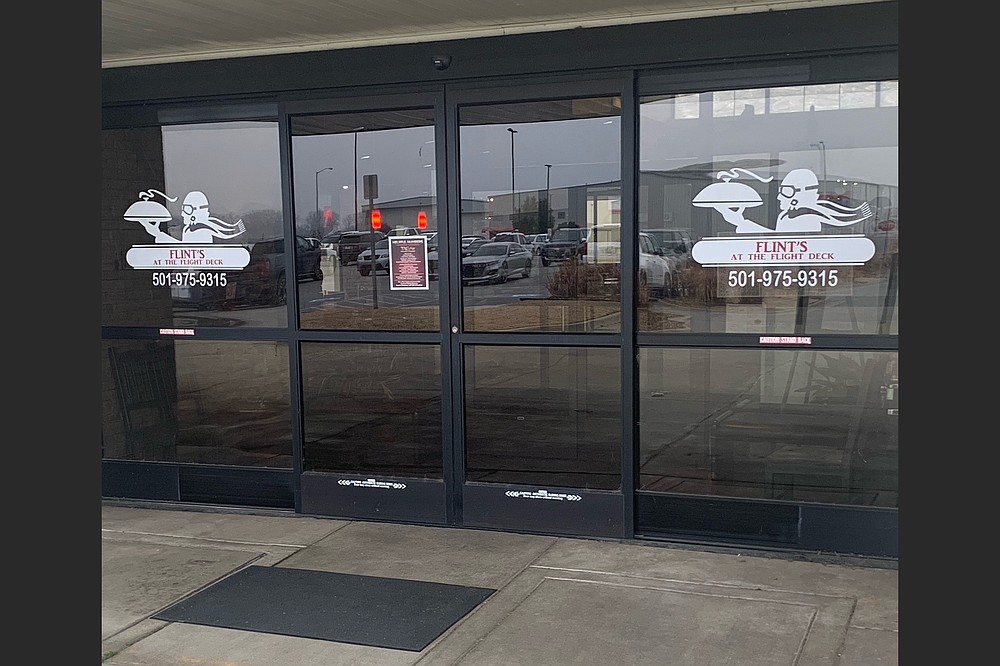 Flint Flenoy has taken over Central Flying Service's Flight Deck, where he was executive chef from 2001-12, and opened Flint's at the Flight Deck. (Special to the Democrat-Gazette)

Flint Flenoy has returned to his roots, in a way: He has taken over the former Flight Deck, in the Central Flying Service flight training facility, 2301 Crisp Drive, Little Rock, where he had been the executive chef from 2001-12. Flint's at the Flight Deck opened just over a week ago, with what Flenoy calls a "retro" menu that he first created 18 years ago — breakfast items including omelets, pancakes and keto combos and a wide range of salads, burgers (including "The Greatest Cheeseburger in Aviation History" and an Asiago Mushroom Burger), what Flenoy promises is "some of the best fried chicken in the city, guaranteed" and sandwiches on a variety of breads. Hours are 7 a.m.-3 p.m. Monday-Friday, 10 a.m.-2 p.m. Saturday. The phone number is (501) 975-9315. Flenoy also recently reopened Flint's Just Like Mom's in the Union Plaza Building, 124 W. Capitol Ave., Little Rock, and Flint's at the Regions has been operating in the former Sack-It Grill space on the ground floor of the Regions Building, 400 W. Capitol Ave., Little Rock.

The Southern Standard is now the official food truck of Me and McGee Market, 10409 U.S. 70 North Little Rock, by way of a new partnership between chefs Josh Smith and Jamie McAfee and Me and McGee partner and spokesman Logan Duvall. The truck has been around for about a year, but it will now park almost exclusively at the popular market, occasionally venturing forth for market-sponsored events, while continuing to handle catering assignments. Duvall describes it as a wholly owned subsidiary. Smith, who had worked for McAfee at the Pine Bluff Country Club, is the operations manager. The menu will focus on locally sourced items that the market carries, centering on a pair of specialty burgers — the Market Burger, for example, consists of Hoien Farm's beef with lettuce, tomato, onion and Cheddar cheese on Serenity Farms sourdough — plus a couple of sandwiches and one or more vegetarian entrees. Market produce in overabundance — Duvall says this week it's an excess of fingerling potatoes — will find its way into the food truck's other principal output: microwaveable meals "almost" ready to go. (Duvall cites Smith's chicken piccata as a popular seller.) Right now the food truck is open 11 a.m.-2:30 p.m. Friday-Saturday and 11 a.m.-2 p.m. Sunday but those Sunday hours in particular are likely to expand. The food truck's phone number is (501) 918-8600. The market takes its name, by the way, from Duvall's grandparents, whose last name is McGee. His grandfather has passed away but grandmother Debbie McGee is still a partner.

A spokesman for the Conway-based Tacos 4 Life chain is sticking to the not-entirely specific "early Spring" target for the restaurant it's readying on the site of the former Mexico Chiquito, 13924 Cantrell Road, Little Rock.

The Starbucks at 418 E. Broadway, North Little Rock, has reopened after several days of closure for what we are told was "deep cleaning." Eagle-eyed readers had reported a hand-written sign on the drive-thru that read "Closed until further notice. Sorry for inconvenience." The phone number is (501) 366-5374.

Sunday, if you have not already realized it, is Valentine's Day (also known by some as Torture Single People Day). Many restaurants that would not ordinarily be open at all on Sunday, or not for Sunday dinner, are taking advantage of the day and opening their doors for celebrating couples. Some, including Allsopp & Chapple in the 300 block of Main Street, Little Rock, are serving special prix-fixe menus. Note that if you are venturing out into the covid-19 maelstrom to dine in any restaurant, and do not want to risk disappointment as well as the virus, reservations are pretty much a must. 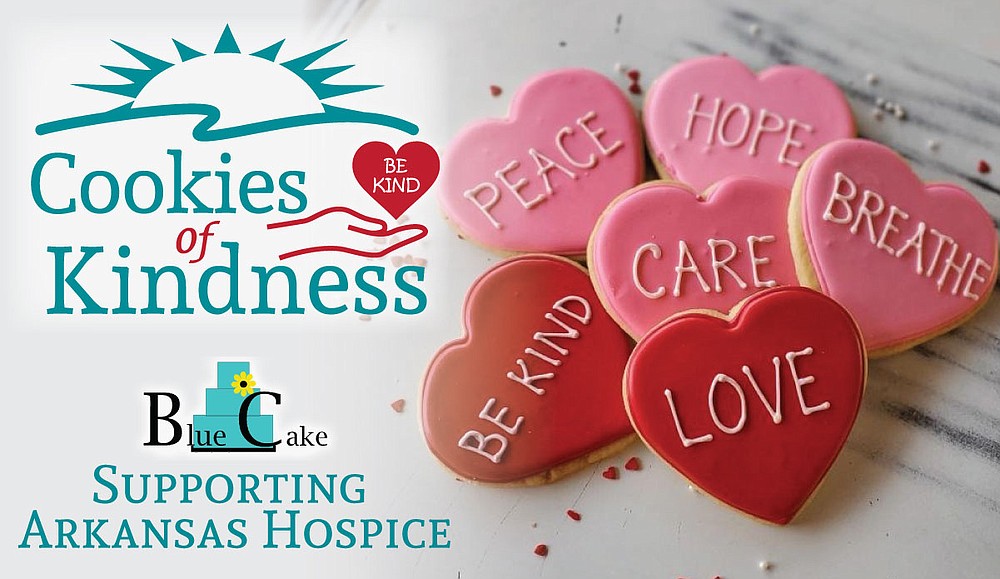 Blue Cake Company is donating a portion of the proceeds from the sale of its “Cookies of Kindness” to Arkansas Hospice. (Special to the Democrat-Gazette)

And Blue Cake Company is donating a portion of its proceeds for "Cookies of Kindness," a special arrangement of six Valentine heart-shaped sugar cookies with encouraging messages of love and hope, to Arkansas Hospice, the state's largest nonprofit hospice care provider. They're $20, available through the end of February online at arkansashospice.org/cookiesofkindness or directly from Blue Cake stores at 315 N. Bowman Road and 6800 Cantrell Road in Little Rock. Since the cookies are baked to order, Blue Cake says you need to give them a two-day notice from order to pickup.