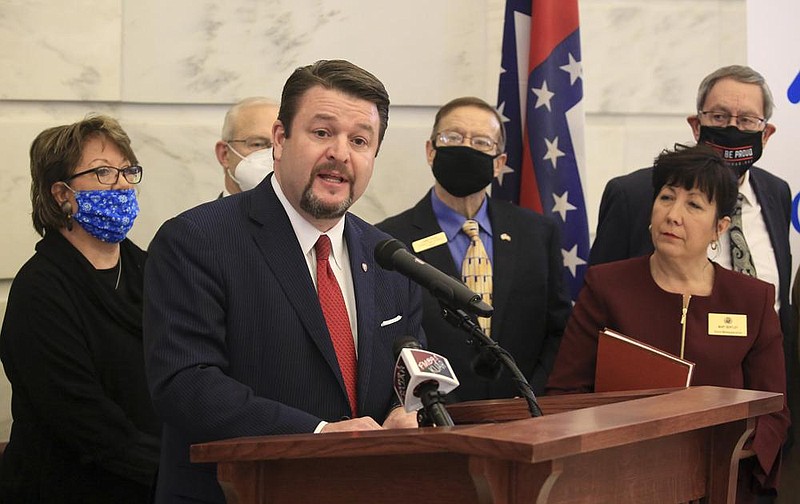 “Today, we begin the process of flipping the trigger and ending nearly all abortions in Arkansas,” Sen. Jason Rapert said Wednesday about his bill that would ban all abortions except those to save the life of a mother. More photos at arkansasonline.com/211abortion/. (Arkansas Democrat-Gazette/Staton Breidenthal)

Republican state lawmakers seeking to force the U.S. Supreme Court to reconsider its long-standing precedent upholding the right to an abortion took the first step Wednesday of advancing legislation to enact a near-total ban on abortions in Arkansas.

The legislation, Senate Bill 6, received unanimous support from the Senate Public Health, Welfare and Labor Committee after an abbreviated debate, and it now heads to the Senate floor.

If passed by both chambers of the Legislature, the bill would prohibit all abortions in Arkansas except for those performed to protect the health or life of the mother. The bill does not include exemptions for rape or incest, and would subject doctors to felony charges and up to 10 years in prison for performing abortions.

The sponsor, Sen. Jason Rapert, R-Conway, said the bill was intended to create a law that would serve as a catalyst for an eventual U.S. Supreme Court decision overturning Roe v. Wade, the court's nearly 50-year-old precedent holding that women have the right to obtain abortions.

"Today, we begin the process of flipping the trigger and ending nearly all abortions in Arkansas," Rapert said Wednesday.

The bill already has drawn the threat of a legal challenge from the American Civil Liberties Union of Arkansas, which called the proposed ban unconstitutional.

In addition, an attorney for the National Right to Life Committee sent a letter to Gov. Asa Hutchinson last month expressing concerns that a failure to get the Supreme Court to reverse its Roe v. Wade precedent could set the anti-abortion movement back. (A spokeswoman for the national committee said the group does not have a stance on SB6, and that the letter represents the personal views of its attorney, James Bopp).

The success of the bill in the Senate committee Wednesday was all but assured by its all-Republican makeup, including several co-sponsors of SB6.

Earlier Wednesday, Rapert held a news conference with lawmakers and anti-abortion advocates where he touted the support for SB6 by several groups, including Arkansas Right to Life, the Arkansas Family Council and the Catholic Diocese of Little Rock.

A sheet containing 250,000 signatures supporting an end to abortion, collected from around the country by a group headed by longtime anti-abortion activist Allan Parker, was rolled out over a flight of steps stretching from the Senate doors to the Capitol rotunda.

"There is overwhelming support," Rapert said. "There's more support for SB6 than there was for the [Arkansas Human Heartbeat Protection Act] in 2013."

The 2013 act banned abortions at as early as 12 weeks of pregnancy, but was later struck down by a federal court.

According to the state Department of Health, 2,963 abortions were performed in Arkansas in 2019 across three operating clinics in the state. Since that year, the number of clinics performing abortions dropped to two, which are both in Little Rock.

Hutchinson, a Republican, said through a spokeswoman Tuesday that he had "a number of concerns" with SB6, but the governor did not commit to signing or vetoing the bill.

Asked about Hutchinson's comments Wednesday, Rapert said he had "communicated" with Hutchinson to "cast a different light" on the Bopp letter.

"I feel good about the prospects going forward, and I hope that [Hutchinson] can come around, and I respect the opportunity for people to take time to weigh the evidence," Rapert said.

Debate on the bill was limited to five minutes for each side of the issue Wednesday because of concerns about incoming inclement weather. Several women who had signed up to speak against the bill, but who quickly ran out of their side's time, lambasted the committee for rushing to a vote.

"You've listened to so many people, to say that you would not listen to everyone is so unfair," said Karen Musick of the Arkansas Abortion Support Network during her testimony.

No one from ACLU Arkansas -- a frequent legal adversary of abortion restrictions passed by lawmakers -- spoke against the bill in committee Wednesday. Executive Director Holly Dickson said the group is reaching out to members and lawmakers to raise awareness of SB6, which she conceded was "very likely" to pass.

"Arkansas has some of the strictest hurdles in the nation for access to reproductive health care," Dickson said. "The General Assembly needs to take proactive not regressive action."

Lawmakers in Alabama passed legislation similar to SB6 in 2019, making it a felony for doctors to perform abortions other than to protect the life of a mother, according to news reports. The law was struck down by a federal judge before it it took effect.

SB6 could be heard as soon as next week in the Senate, which canceled the remainder of its business this week because of the weather. 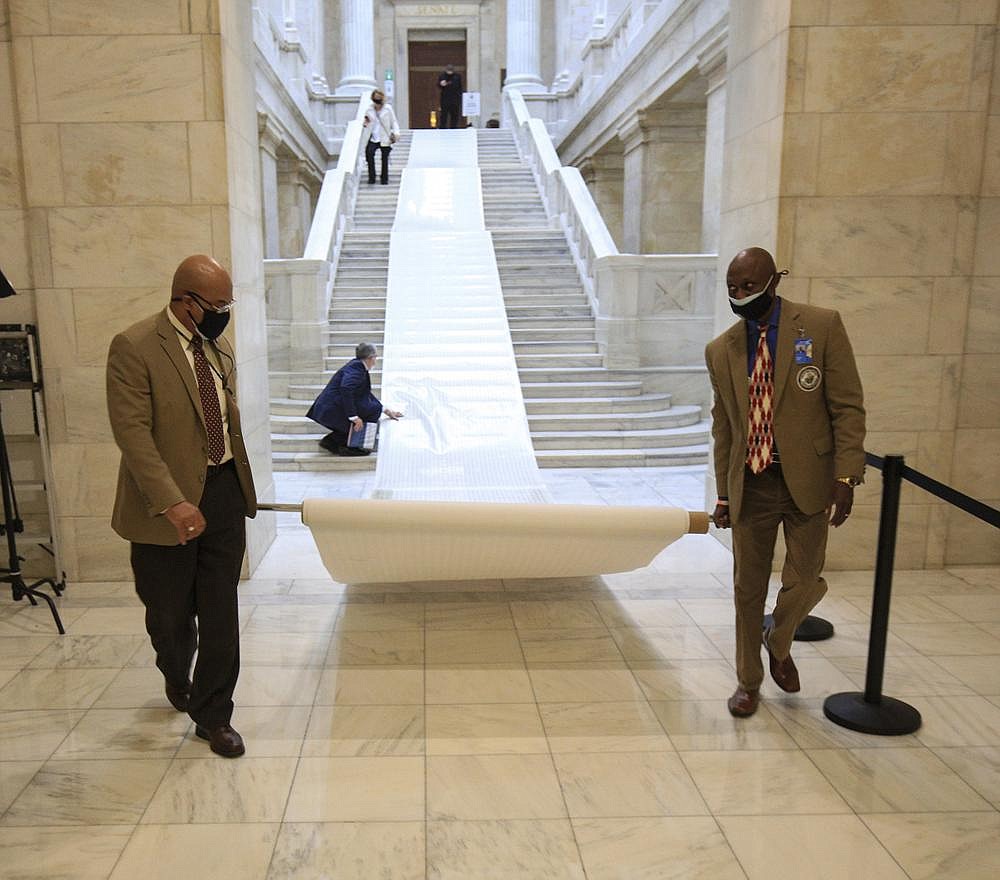 Senate sergeants at arms Alvernon Rogers (left) and Joseph Gray unroll a sheet containing 250,000 signatures of people supporting an end to abortion that were collected from around the country by a group headed by anti-abortion activist Allan Parker. The scroll stretched down a flight of stairs from the doors of the Senate to the Capitol rotunda. (Arkansas Democrat-Gazette/Staton Breidenthal)
ADVERTISEMENT