Veterans help their own with food pantry

Camaraderie comes with the groceries at just-opened NLR warehouse by Stephen Simpson | February 11, 2021 at 3:29 a.m. 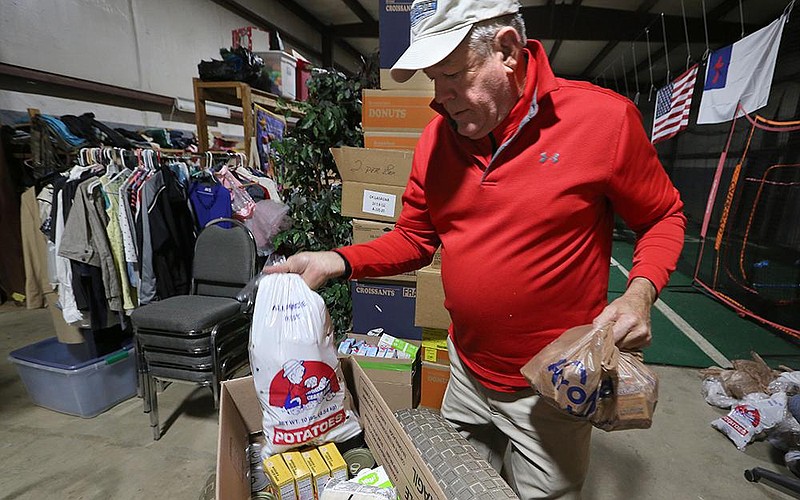 A small warehouse hidden away on MacArthur Drive in North Little Rock has been turned into a food pantry for veterans in need of more than just a box of food items.

The Veterans Village Helping Hand Program Food Pantry, at 8325 MacArthur Drive, opened Wednesday morning with little fanfare, but for veterans it is a much needed resource.

"We don't do this for publicity or anything like that," said retired Army Col. Mike Ross, who is also chairman for Veterans Villages of America Inc. "We don't share photos or anything like that, because for many veterans their pride makes it hard for them to ask for help. We want this to be the confidential place where they can get help for various things."

The pantry serves all veterans and their families who reside within Central Arkansas, including active duty, National Guard and reserve service members. The organization also delivers to home-bound veterans and will do emergency food calls as well.

The pantry plans to be open from 8 a.m. to 12 p.m. every other Wednesday. The food boxes contain canned goods, frozen foods, tuna, boxes of macaroni and cheese and more.

[Video not showing up above? Click here to watch » https://www.youtube.com/watch?v=_2BtLmsG_-k]

The boxes aren't meant to be used as full meals, but to supplement the food veterans in need already have.

"Many of our veterans and service members and their families are struggling financially, especially during this time of covid-19," said Mark Diggs, founding director of Veterans Villages of America Inc.

The Veterans Village organization received a Coronavirus Aid, Relief and Economic Security Act grant worth $29,000 in December, which Ross said had to be used by the end of the month. The funds were used to purchase food for veterans and to provide temporary shelter for those in need.

The organization received an additional $10,000 from the Bob Woodruff Foundation that must be spent by the end of this month.

"The grant requires us to feed 40 vets for $250 each," Ross said. "We decided we could do better than that, and purchased food through the Arkansas Food Bank to feed 200 to 300 vets."

The organization began renting the warehouse in December and has made it the headquarters of the food pantry.

"This is the first time we have run a food pantry, so we are kind of learning as we go," Ross said.

There were around 50 food boxes inside the warehouse Wednesday that were supposed to go out that day, but the building also housed other items for veterans that included silverware, plates, clothes, chairs and more.

"They don't have to be in need to come here and get things as long as it improves their quality of life," Ross said.

A veteran and his wife came into the warehouse around 8:30 a.m. looking for a food box, and by the time they left a mini-fridge and a table accompanied their box of supplies.

"We believe taking care of our veteran is a matter of national security, because we have an all-volunteer force and the eyes of the nation are looking to see how we treat our veterans when they come out," Ross said. "If we don't treat them well, then why would people join the military?"

Ross said veterans across the nation are facing tough times with highs in unemployment, suicide, divorce, homelessness and alcohol and drug abuse.

A Military.com article reported in December that many veterans have been plagued by unemployment and loneliness during the pandemic.

The unemployment rate for wounded veterans jumped from 11.5% in 2019 to 16.2% in 2020, and more than 40% of respondents in the article said they have experienced issues related to employment as a result of covid-19.

Such statistics are the reason Veterans Villages of America Inc. views the food pantry as an important step in helping veterans navigate society.

"This isn't a welfare program," Ross said. "We are just giving them the benefits that they deserve."

Brian Carlton, a veteran and a volunteer for the program, said the transition from military to civilian life can be hard for some.

"Not having that camaraderie anymore and just being out on your own is difficult," he said. "The civilian world is just so different.That is why places like this are so important. Just being around other veterans who have gone through the same thing as you has this calming effect." 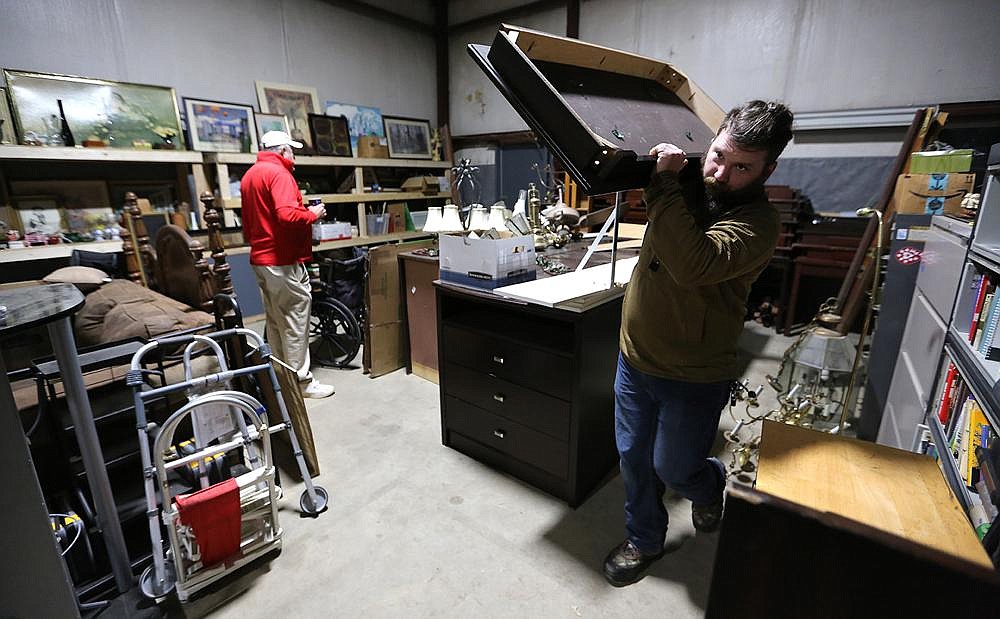 Brian Carlton carries a table to be delivered to a veteran in need at the Veterans Villages Helping Hand Program Food Pantry in North Little Rock. (Arkansas Democrat-Gazette/Thomas Metthe)
ADVERTISEMENT