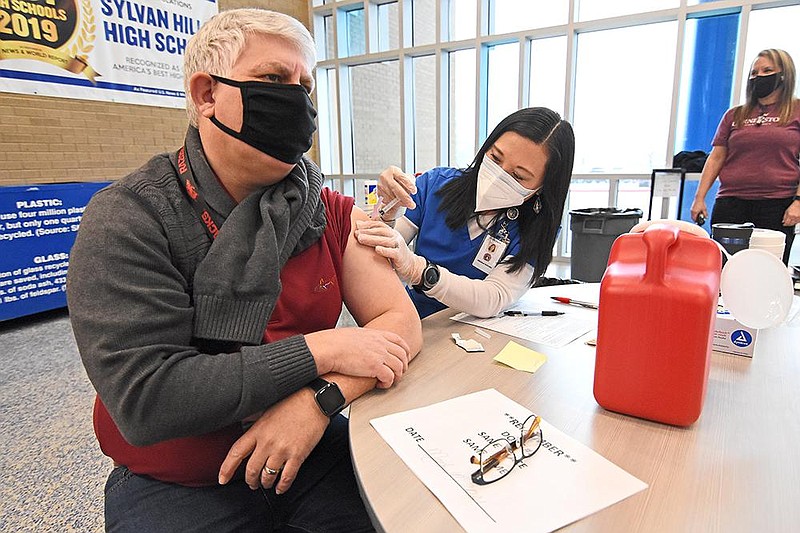 Gov. Asa Hutchinson on Tuesday said the state needs to get vaccinations to more residents age 70 and older before it can make them available to additional population groups, which he hopes to do by March 1.

Back up: Who is currently eligible for shots?

• Everyone in Phase 1-A, mainly healthcare workers and people living or working in long-term care facilities

Read more about who falls into which phase of the state’s rollout plan.

How many people 70 or older have been vaccinated so far?

Arkansas Department of Health spokesman Gavin Lesnick said 122,485 Arkansans age 70 and older or about 36% of that population had received at least one dose of vaccine as of Tuesday.

The state's regular allocation this week is 45,325 vaccine doses, distributed to pharmacies, hospitals and other providers for the initial shots of the two-dose regimens.

Additionally, Hutchinson said that at least 11,600 more doses of vaccine will be available each week at 58 Walmart stores across the state starting Friday thanks to a federal program.

Hutchinson also said 1 million doses will soon be distributed nationally to federally funded community health centers across the country. He didn't yet have details on how many of those doses will go to Arkansas' 12 qualifying centers.

Who could next be eligible for the vaccine?

"Essential priority workers," including those working in grocery stores and factories, fall into Phase 1-B, but Hutchinson declined to say what groups within Phase 1-B would be the next to become eligible.

He has said he hopes to complete Phase 1-B by April. Phase 1-C, which includes people 65 or older and people 16-64 with high-risk medical conditions, would then begin.

How many total people have been vaccinated so far?

The state reported Wednesday 651,475 doses have been allocated to that state so far, of which 425,873 have been given.

The figure doesn’t equate to the number of people vaccinated because it includes the number of second-dose booster shots given out, in addition to initial shots.

Read more of the governor’s comments on vaccine distribution from his weekly news conference on Tuesday.