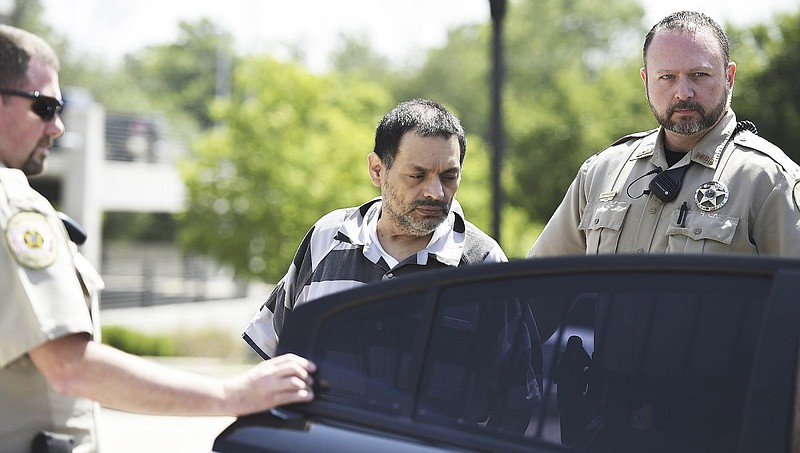 Mauricio Torres is escorted out of the Benton County Courthouse Annex in Bentonville in this June 2019 file photo.

BENTONVILLE -- Mauricio Alejandro Torres will receive a third trial in the killing of his son -- a crime for which he has twice been convicted.

The state Supreme Court heard arguments in the case Jan. 28.

Torres, 50, of Bella Vista is charged with capital murder and battery. Prosecutors seek the death penalty.

He's accused of killing his son, Maurice Isaiah Torres, who died March 30, 2015, at a Bella Vista medical clinic, according to court documents.

Torres originally was tried and convicted in 2016 and sentenced to death, but the state Supreme Court overturned the conviction in 2019 and ordered Torres be given a new trial because prosecutors didn't prove their case for the death penalty.

A second jury found Torres guilty last year of the murder and battery charges. The proceedings ended during the sentencing phase after a witness jumped from the jury box March 5 and attempted to attack Torres. A Benton County deputy and a bailiff stopped the witness from reaching Torres.

Karren declared a mistrial and ruled Torres should have another trial.

"Mauricio Torres has been convicted twice of the brutal murder of his son, but this decision means Isaiah's loved ones and the entire community will have to endure a third devastating trial," she said. "I will do everything in my power to bring justice for Isaiah."

Veda Berger, senior assistant attorney general, told the seven justices on the Supreme Court that Karren made a mistake granting a mistrial in the guilty phase for an incident that happened during sentencing.

An error in the sentencing phase does not require the readjudication of the guilty phase of the proceedings, Berger said. She wanted the justices to send the case back to Benton County and have another jury decide Torres' punishment.

Jeff Rosenzweig, one of Torres' attorneys, agreed with Karren's decision. Rosenzweig told the justices that the witness jumped from the stand and overturned a table in front of the jury in an attempt to attack his client.

The state Supreme Court found Karren didn't commit an error and didn't exceed his jurisdiction in declaring a mistrial. The high court's opinion states Karren correctly determined the unique circumstances in the case required a mistrial in the guilt and penalty phases of the trial.

Justice Shawn Womack was the only dissenting justice. He stated what happened during the sentencing phase had no bearing on the concluded phase of Torres' trial.

Torres is being held without bail in the Benton County jail. A status hearing is scheduled for March 12.

Karren has issued a gag order prohibiting prosecutors and Torres' attorneys from commenting on the case.