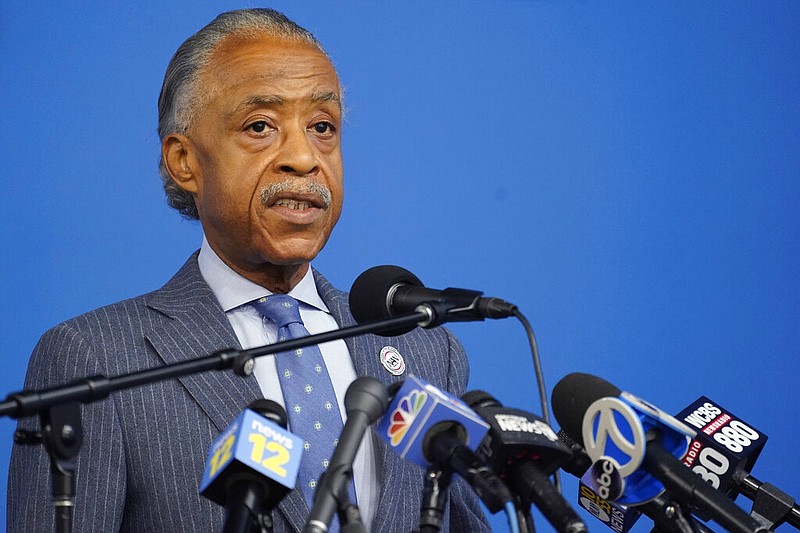 The Rev. Al Sharpton speaks to reporters during a news conference at the National Action Network headquarters in New York in this Nov. 24, 2020, file photo.

If the contributions and struggles of Black people had not been omitted, "a special effort to enlighten everyone" on African American history might not be needed, the Rev. Dr. Al Sharpton told viewers of the University of Arkansas at Pine Bluff's annual Black History Month program over Zoom on Thursday afternoon.

"When we look at what is going on during the times in which we live, we can learn a lot from the past to understand where we are and how we function today," Sharpton said.

The UAPB Office of Student Involvement and Leadership sponsored the program.

Sharpton, a well-known civil-rights leader and host of MSNBC's "PoliticsNation" and the national radio show "Keeping it Real with Al Sharpton," spoke for more than 30 minutes and touched on topics including the program's theme of "Unity For Our Nation," the 1619 Project proposed as a curriculum in Arkansas and police reform following police-involved killings that sparked a worldwide outrage against systemic racism in 2020.

During his opening thoughts, UAPB Chancellor Laurence B. Alexander said: "It is a must we recognize a path and become knowledgeable about the path we're moving on." Sharpton remarked that Americans can learn much from the past by understanding where the country is and how it functions today.

"When we talk about unity, we always had different strands, different lanes that people would label in the freedom movement, civil-rights movement, human-rights movement," Sharpton said. "But somehow we were able to be united, even if we were not uniformed. You must not fear working with people that have a different method than you or different way to believe than you, as long as we're all headed to the same [goal], which is equal protection under the law and equal opportunity."

Sometimes unity is confused with uniformity in what's considered being Black, Sharpton told viewers. An example he used was if one Black person tells another: "If you don't meet my Blackness, you're not Black in any way."

"We were brought to be enslaved, so don't act now like any tribe is any less African," Sharpton said. "We're all Black, and if we're all trying to do what is right for the whole, let people do what is comfortable to them. People don't have to imitate you to be Black. You are not the decider or convener of Blacks."

UAPB student Leon Jones III, who hosted the presentation, read a question from a viewer to Sharpton about how to confront racist microaggressions in a respectful manner.

Sharpton said he resents those who say educated Black people who are well-spoken are acting white.

"So what are you really saying? To be Black is to be unlearned and inarticulate?" Sharpton said. "Don't let people impose inferior labels on you to deal with their perception that you can't make the mark. We can do whatever anyone else does as long as we have the equal opportunity."

Sharpton recounted the incidents of victims shot to death by law enforcers and citizens acting in a law enforcement role during the first half of 2020. He linked the 2014 killing of Eric Garner, who was suffocated in an illegal chokehold at the hands of a New York policeman, to the 2020 tragedies to highlight the need for a law that would prevent such killings.

"I wanted to show the connection that if we had the right law, then maybe [the death of] Eric Garner wouldn't happen because there would have been laws against suppression of people," Sharpton said. "... That policeman would have been afraid of a federal law."

Sharpton summed up his message as a plea for individuals to unite for the common good to change policing and voting laws, adding some states are changing voting sites and registrations to suppress the Black vote. He mentioned people can rally around the John Lewis Voting Protection Act, named after the late congressman from Georgia who died last July 17, and the George Floyd Justice and Policing Act, named after the Houston native who suffocated to death at the knee of a Minneapolis policeman last May 25. The policeman and three others were charged in Floyd's death.

"The ultimate victory we've had in our battles for the last two centuries is not when we went from one episode to another, but where we used the episodes to change the law and organize around it," Sharpton said.

Larry Braggs, a former lead singer of The Temptations, even joined in the webinar and asked Sharpton how to get involved with the National Action Network, a civil-rights organization the preacher founded in 1991. Sharpton told Braggs to visit: nationalactionnetwork.net.

Sharpton also accused lawmakers of trying to keep the 1619 Project curriculum, based on a 2019 New York Times Magazine project that details the beginning of slavery in America, out of schools. A bill presented by State Rep. Mike Lowery (R-Maumelle) that would have banned the curriculum in Arkansas schools failed in a House committee meeting Tuesday.

"To say they don't want the centrality of slavery in American history taught in your state means they don't want to tell American history," Sharpton said. "They want to tell something else. That's something all of us can unite around, saying, 'No, Mr. and Mrs. Legislator, we need the whole story told.' And it's not to indict America. It's to tell the whole story because you can't heal until you deal with the [injury] and you cannot have a healing session leaving the injured out the room."