Boozman says he will vote to acquit Trump 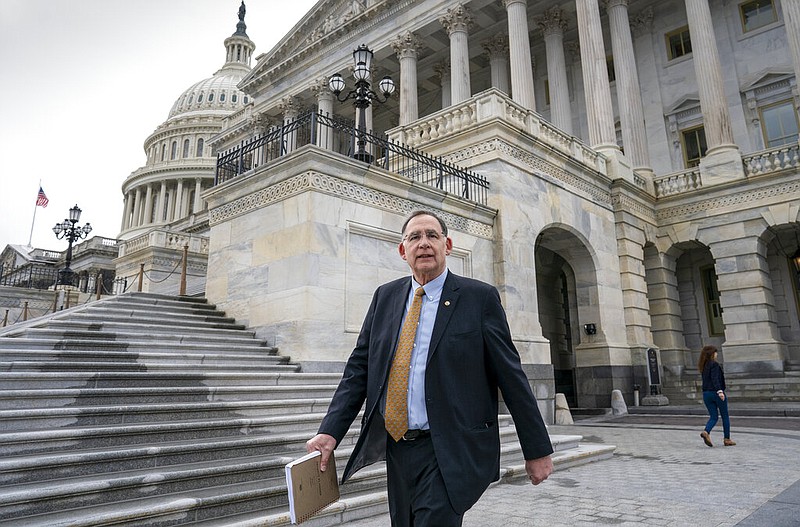 While saying the Senate lacks jurisdiction, "That does not keep [Trump] from being charged in a criminal court or a civil court," the lawmaker from Rogers said.

"If there's evidence that the president committed a crime, then he needs to be charged and held accountable," Boozman said. "The rioters in the Capitol, all those individuals need to be tried to the fullest extent of the law."

Asked whether Trump had committed any crimes, Boozman said he was withholding judgment.

"That's a question that the prosecutors, that the legal authorities have to decide," he said. "His actions were certainly not anything that I would have done and didn't condone at the time."

While supporting Trump's right to challenge the election results in the courts, Boozman quickly acknowledged Democrat Joe Biden's Dec. 14 victory in the Electoral College, and he opposed efforts to overturn the certified election results Jan. 6.

Although he believes Trump misled people about the Nov. 3 election, Boozman portrayed falsehoods as commonplace in government.

"You know, if you get onto every politician that says things that aren't true, then you're going to be impeaching about 90% of the people that serve office," Boozman said. "We have to be careful. You have the right to say things. So we have free speech, and the president, I think, actually believed that [the election had been stolen]. Some of the people that he was around were telling him those things, and a large group of the population believed it."

Boozman's statement that he would vote to acquit Trump was no surprise.

He said he had previously questioned the constitutionality of the congressional proceedings, telling the Arkansas Democrat-Gazette they were "a significant expense and waste of time."

On Tuesday, Boozman and U.S. Sen. Tom Cotton, R-Ark., voted against a motion declaring that Trump is "subject to a court of impeachment for acts committed while president."

After hearing the case against Trump, Boozman said Thursday his position has not changed.

"I think that the important thing that we need to remember is impeachment is about removal. The voters removed him; he's not in office anymore," Boozman said.

"If I were in the position of the president, [I] would not have done what he did. I have condemned that. The question is, is impeachment the appropriate vehicle for this to play out? And I've been very clear that that's unconstitutional," Boozman said.

Asked his views on a potential 2024 Trump presidential bid, Boozman said, "I don't think that's going to happen. I think the president's going to need to repair his financial abilities and he's still not exempt. He's got a lot of lawsuits now he's having to fend off. And certainly, I don't think anything that's being shown [at the trial] increases his image with the public."

Also Thursday, CNN walked back claims it had made about how Cotton was armed during last month's breach of the Capitol. The network originally reported that Cotton was armed with a gun, but Thursday corrected it to a knife.

The corrected part of the cable news network's website story about the matter now reads:

"On the afternoon of Jan. 6, Arkansas Republican Sen. Tom Cotton believed the situation at the Capitol was so dangerous that he asked one of his staffers to bring his knife to the undisclosed location where senators were being hidden from rioters, and that he was prepared to use it.

"Cotton told CNN's Jamie Gangel that afternoon during the riot: 'I'm armed and I'm immune from prosecution,' and indicated that he was prepared to defend himself, defend the room, if the rioters attacked and tried to get in where the senators were.

"After the stunning videos and photos presented by the House managers today, we now know how close it was for Vice President Mike Pence and Sen. Mitt Romney. We know that Kevin McCarthy and other leaders were desperately calling for help. We know that five people died including Capitol Police Officer Brian Sicknick.

"So in real time, on the afternoon of Jan. 6 -- around 2:20 p.m. -- Cotton thought the situation was so dangerous, he asked for his knife to be brought to him. That there was that kind of threat -- mortal danger.

"Update: Sen. Cotton's office has now clarified to CNN that he was armed with a knife, not a gun."

Cotton's spokesman told the Arkansas Democrat-Gazette on Wednesday night that "Senator Cotton did not have or request a gun that day, nor does he need one to defend himself and others under any circumstances."

Reached by the Democrat-Gazette on Thursday, a Cotton spokesman described the CNN correction as accurate.