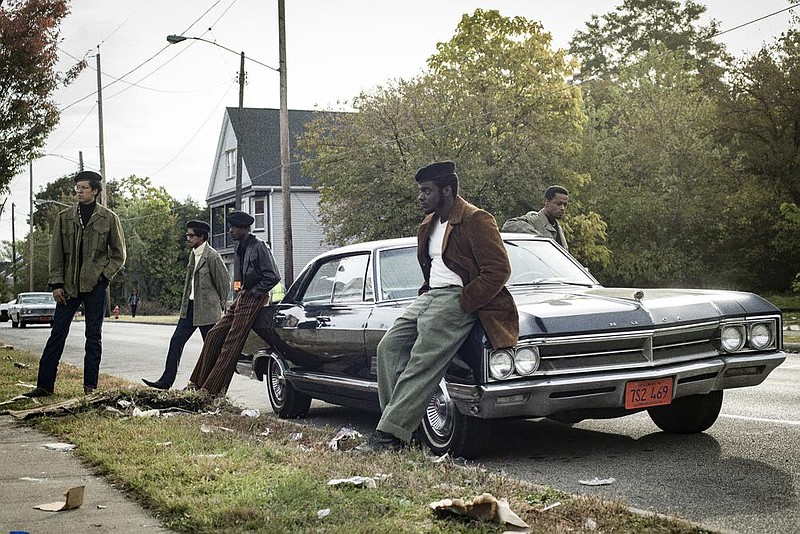 Optimistically speaking, one person out of 100 might actually act in the best interest of everybody else instead of simply looking out for themselves. Which means for every one of those selfless individuals, there are 99 more concerned only by their own micro-experience than that of the community around them.

"Judas and the Black Messiah," Shaka King's shattering film about Fred Hampton (Daniel Kaluuya), the charismatic chairman of the Illinois chapter of the Black Panther party in the late '60s, and Bill O'Neal (LaKeith Stanfield), the man who would infiltrate the organization, and betray him to the FBI, is a testament to this most egregious human principle -- memorialized, as the film's title strongly asserts, in the Bible -- and one of the confounding bedrocks of human civilization.

Hampton was a young man of 20 when he became the chairman of the Illinois chapter in Chicago, and his successes immediately grabbed the attention of J. Edgar Hoover (here played by Martin Sheen), who was obsessed with the idea that the Civil Rights movement had inlaid ties with the communists. Putting increasing pressure on his Chicago bureau office to defuse Hampton, agent Roy Mitchell (Jesse Plemons) brings in O'Neal, recently busted for impersonating an FBI agent, and offers him a chance at his freedom, but at the cost of playing snitch on "Chairman Fred."

King, who co-wrote the screenplay, boils the story down to its essence without getting needlessly choked in the details. We see Hampton's savvy, and his ability to connect with people of any creed or color -- easily, the most unnerving element of his program to Hoover's FBI was the so-called "Rainbow Coalition" where he banded together the Panthers with Black street gangs, but also Puerto Rican groups, and, shockingly, all-white coalitions, united under the rubric of being poor and abused by Chicago's notoriously corrupt and racist police department -- but also, his absolute belief in keeping political power in the hands of the people, not the government.

To get a more complete sense of the FBI's involvement/disruption within the Civil Rights movement, you could place this film as the narrative filling in a powerful documentary sandwich: Sam Pollard's excellent doc from last year, "MLK/FBI," concerning Hoover's increased paranoia about the movement, and his tasking his team with digging up dirt on the civil rights crusader in order to discredit him; and the less-known doc, "1971," Johanna Hamilton's eye-opening history lesson about a group of young radicals who broke into an FBI field office outside of Philadelphia, revealing a trove of documents proving the Bureau's standing policies of spying on its own citizens, which eventually led to major reformations (Hoover, still in office, died of a heart attack in 1972), and far more oversight.

King's film features absolutely blazing performances from its two male leads -- Kaluuya, in particular, is incredibly good at conveying Hampton's inherent humanity, the ways in which he connected to his audience, no matter their race or creed -- in addition to a strong turn by Dominique Fishback, as Hampton's wife, Deborah Johnson, and a strong, driving narrative focus that keeps the line taut, even if you know exactly what's coming.

The film manages to portray Hampton in purely human terms, grounded in the reality of the struggle, and avoids needlessly deifying him in the process. Despite the title's biblical implications, Hampton isn't divine. In fact, it is his very humanity that makes his loss feel all the more jarring. Hampton and the Panthers weren't about the "reform" that Dr. King spoke of, they were after nothing less than revolution, an armed insurrection, if necessary. But that's not to say they were some quasi-military junta lusting for personal power: The organization, under Hampton in particular, reached out to fellow disenfranchised communities of all colors and creeds -- as Hampton says at one point, "you can't cheat your way to equality" -- providing food and childcare programs in lieu of the existing local government's woeful failures. People called him "Chairman Fred" lovingly, not in irony.

By contrast, the Bureau -- a bunch of pale white men in dark suits, exploiting their natural air of superiority in service to Hoover's whims -- acts completely in the shadows, both literally and morally. Not for nothing does O'Neal continue to meet Mitchell, his "handling agent" in expensive steakhouses; and not for nothing does King more often than not have the pasty agent smoking a fat stogie, exactly like the sort of Chicago crime syndicate don the Bureau was formed to strike against in the first place. (Plemons, it must be said, has a quality not unlike that of the brilliant, late Philip Seymour Hoffman: His puffy, downtrodden aspect can be used equally effectively as an oppressor or the oppressed.)

If the film has one glaring omission, it's the lack of a sense of the inner emotional life of O'Neal. Though he remains the primary protagonist, his motivations and reservations remain largely unexplored -- King is obviously not going for "The Killing of Jesse James by the Coward Robert Ford," exactly -- but, fortunately, Stanfield gives enough breadth to the performance to keep the film reasonably balanced, regardless.

The blatant nature of the FBI's scheme, essentially assassinating Hampton in his own bed, and claiming they were acting in self-defence, might be the hardest hitting brick that King hurls at the system, but there are just as many small touches -- Hampton and Johnson's relationship is quietly affecting, and her displeasure of having to share the love of her life with the rest of the world is palpable -- that help convey the magnitude of betrayal, both by O'Neal (who right up until his death defended his actions), but also by a system of government famously meant to be "of the people," but, in practice, was anything but.

‘Judas and the Black Messiah’

Playing theatrically and on HBO Max.