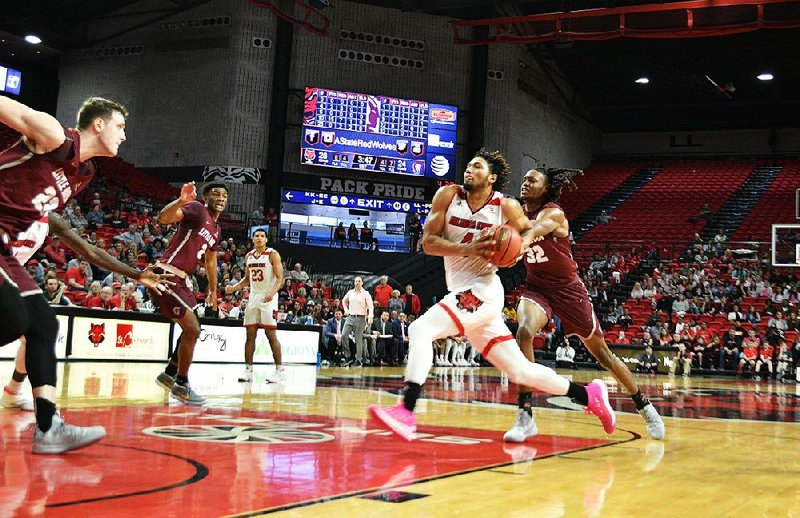 The UALR and Arkansas State men's basketball teams are heading in opposite directions.

While the Trojans stumbled on the road at Texas State last weekend -- swept by the Bobcats for the second time this season -- the Red Wolves sailed to a pair of victories over Louisiana-Lafayette.

ASU scored 95 points last Friday, its most in a regular-season conference game since 2000, then shot a season-high 57.9% from three-point range Saturday to sweep the Ragin Cajuns, who entered the weekend leading the division.

"They played really hard and executed and played with passion," ASU Coach Mike Balado said about his team. "It was fun to watch."

ASU has won three out of four after a 2-4 start to conference play. UALR, meanwhile, is struggling for consistency in its conference-title defense. The Trojans have earned consecutive wins only once since Jan. 2.

UALR's 70.5 points per game rank ninth in the Sun Belt, and the Trojans' sputtering offense hurt them against Texas State.

Over the two losses, UALR -- which commits more turnovers than all but two teams in the Sun Belt -- turned the ball over 34 times for Bobcats 44 points. From the field, the Trojans shot 38.6% in last Friday's 57-47 defeat, falling beneath 40% shooting for only the third time this season, and since the opening weekend of Sun Belt play, UALR shot above 30% from three-point range only twice.

Eaton has fueled the Red Wolves' recent surge, scoring a career-high 32 points in last Friday's win over Louisiana-Lafayette before following it up with a 15-point, 10-assist performance Saturday. Over the past four games, Eaton is averaging 17.3 points on 42% shooting with 7.2 assists.

The guard from Helena-West Helena finished with 25 and 27 points in the Red Wolves' two meetings with the Trojans last season, in which UALR got past ASU by three points both times. Along with sophomore guard Caleb Fields (12.2 points per game), the Red Wolves' backcourt presents a challenge.

"I think Eaton always plays well against us," Walker said. "Fields and Eaton are really good at pushing the ball up the court. I think our transition defense has to be paramount. It has to be on point."

The dual forces of senior Ruot Monyyong and junior Nikola Maric have provided UALR with its only offensive consistency, combining for 26.8 points per game.

"I think Monyyong and Maric are two of the best bigs in the league," Balado said. "They're good and talented. UALR has two bigs who are very skilled."

The UALR pair will take on one of the brightest young forwards in the conference in ASU's Norchad Omier. The freshman from Nicaragua is the only true freshman in the nation averaging a double-double, posting 13.0 ppg and 11.9 rpg. He registered his 10th double-double of the season in Saturday's victory against Louisiana-Lafayette.

The 6-7 Omier will contend with Monnyong, the 6-10 reigning conference defensive player of the year, and Maric. The duo pulls down 17.1 rebounds per game combined.

"Size really doesn't affect Norchad," Balado said. "It's just getting him the ball and getting him going early. I didn't think it bothers him at all."