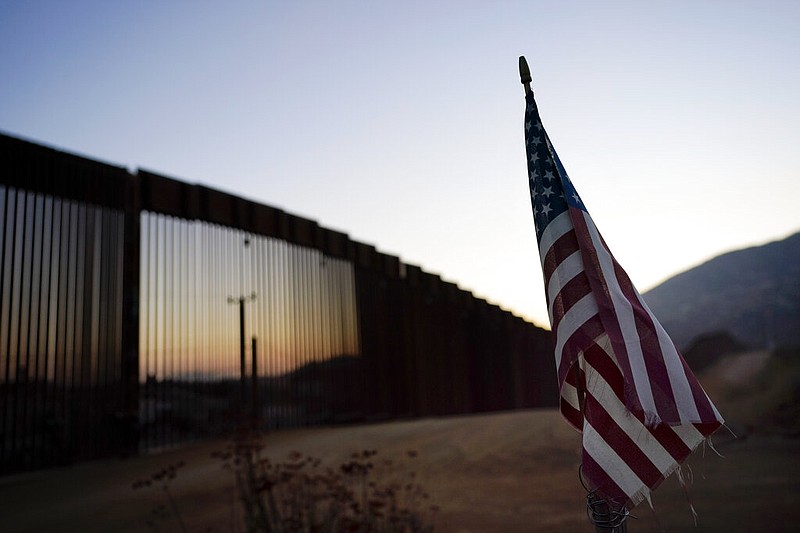 SAN DIEGO -- The Biden administration Friday announced plans for tens of thousands of people who are seeking asylum and have been forced to wait in Mexico under a Trump-era policy to be allowed into the U.S. while their cases wind through immigration courts.

The first wave of an estimated 25,000 asylum-seekers with active cases in the so-called Remain in Mexico program will be allowed into the United States on Feb. 19, authorities said. They plan to start slowly, with two border crossings each processing up to 300 people a day and a third crossing taking fewer.

The administration declined to identify the three crossings out of fear it might encourage a rush of people, but U.S. Rep. Henry Cuellar, a Texas Democrat, said officials told him that they are Brownsville and El Paso in Texas, and San Diego's San Ysidro crossing.

The move is a major step toward dismantling one of former President Donald Trump's most consequential policies to deter asylum-seekers from coming to the U.S. About 70,000 asylum-seekers were enrolled in the program officially called Migrant Protection Protocols since it was introduced in January 2019.

On President Joe Biden's first day in office, the Homeland Security Department suspended the policy for new arrivals. Since then, some asylum-seekers picked up at the border have been released in the U.S. with notices to appear in court.

Biden is quickly making good on a campaign promise to end the policy, which the Trump administration said was critical to reversing a surge of asylum-seekers that peaked in 2019. But the policy also exposed people to violence in Mexican border cities and made it extremely difficult for them to find lawyers and communicate with courts about their cases.

"As President Biden has made clear, the U.S. government is committed to rebuilding a safe, orderly, and humane immigration system," Homeland Security Secretary Alejandro Mayorkas said. "This latest action is another step in our commitment to reform immigration policies that do not align with our nation's values."

Asylum-seekers will be released with notices to appear in court in cities close to or in their final destinations, typically with family, administration officials said.

Homeland Security said the move "should not be interpreted as an opening for people to migrate irregularly to the United States." Administration officials say the vast majority of people who cross the border illegally are quickly expelled under a public health order that Trump put in place in March amid the coronavirus pandemic. But some asylum-seeking families have been released in Texas and California, working against that messaging.

White House press secretary Jen Psaki said Thursday she was concerned that limited releases in the U.S. may encourage others to cross illegally.

"We don't want people to put themselves in danger at a time where it is not the right time to come, because we have not had time to put in place a humane and moral system and process," she said.

Court hearings for people enrolled in Remain in Mexico have been suspended since June because of the pandemic. Getting word to them about when to report to the border for release in the United States may prove a daunting job.

Homeland Security said it would soon announce a virtual registration process online and by phone for people to learn where and when they should report. It urged asylum-seekers not to report to the border unless instructed.

The International Organization for Migration will help with logistics and test asylum-seekers for covid-19 before they enter the U.S., spokesman Liz Lizama said. The U.N. migration agency's Mexico director, Dana Graber Ladek, said it will seek to inform asylum-seekers across the country about eligibility.

Roberta Jacobson, coordinator for the southwest border on the White House National Security Council, said asylum-seekers who have been waiting the longest will get priority, along with people deemed more vulnerable because of their health or threats to their safety.

The announcement provides no relief to people whose cases were dismissed or denied, and Jacobson told Spanish-language media that the administration was still considering how to address any cases beyond those that are active. Advocates argue that communication problems, including lack of working addresses in Mexico, caused some people to miss hearings and lose their cases as a result.

Mexico agreed to take back more asylum-seekers in June 2019 to defuse Trump's threats of tariff increases. Mexican President Andres Manuel Lopez Obrador welcomed Biden's changes, saying at a news conference Friday that it would be good for the U.S. to host them instead while their cases wind through the system.

The Remain in Mexico releases will come as more people are getting stopped crossing the border illegally since Biden took office, challenging the administration in its early days.

Raul Ortiz, deputy chief of the Border Patrol, said Tuesday that more than 3,000 people had been stopped in each of the previous 10 days, compared with a daily average of 2,426 in January.

About 50 to 80 adults and children have been arriving daily since Jan. 27 at Catholic Charities of the Rio Grande Valley in Texas, which temporarily houses people released by the Border Patrol, said Sister Norma Pimentel, the group's executive director. The charity tests for covid-19 and sends anyone who tests positive to a hotel for isolation.

Jewish Family Service of San Diego housed 191 asylum-seekers the first 10 days of February after they were released, up from 144 in January and 54 in December, said Eitan Peled, the group's border services advocate. They are quarantined in hotels for 10 days.

Separately, the Biden administration's stalled effort to freeze deportations of migrants for 100 days got a boost from more than a dozen Democratic-led states in a lawsuit Texas filed to block the plan.

Texas Gov. Greg Abbott sued last month alleging a deal he struck in the last days of the Trump administration requires the federal government to consult him before making changes to immigration enforcement. The judge overseeing the case has already issued a temporary restraining order against the planned deportation pause.

But such an accord undermines the sovereignty of other states and illegally punishes migrants nationwide, New York Attorney General Letitia James said in a statement Friday announcing a joint effort to block the suit.

"This eleventh-hour deal by the Trump administration and the state of Texas is nothing more than a last-ditch effort by the former president on his way out the door to hogtie every other state in the nation," said James, who is leading the states in filing a friend of the court brief.

The case is overseen by U.S. District Judge Drew Tipton in Victoria, Texas, an appointee of Trump. Tipton is due to hear arguments Friday over Texas' request for a longer injunction that could block the plan throughout the litigation.

Texas argues it will face unique harm from the deportation pause because it will have to spend money on services for unauthorized immigrants who aren't removed from the country as planned. The Democratic states argue in their brief that immigrants contribute about $6.8 billion in state and local taxes each year. Many are also essential workers, crucial during the pandemic, they say.

Information for this article was contributed by Elliot Spagat, Maria Verza and Gisela Salomon of The Associated Press; and by Erik Larson of Bloomberg News.