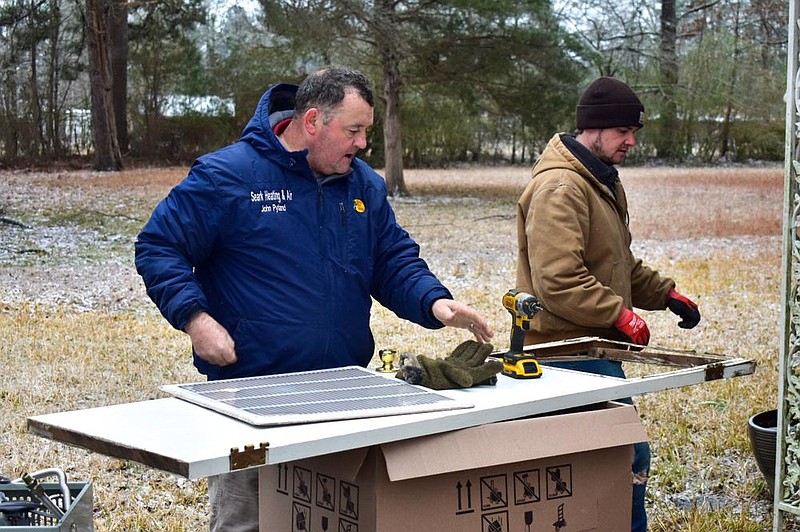 Temperatures in Pine Bluff have dropped, and calls to local heating technicians and plumbers have risen.

Residents in the city are enduring a battle to stay warm and keep water flowing as high temperatures have fallen just below the 32-degree freezing mark and wind chills are below 20 degrees in the past two days. Residents are also stocking up on food, water and other essentials as afternoon temperatures will reach only as high as 18 degrees Monday and drop down to 4 that evening.

SEARK Heating and Air went on nine calls Thursday and five before 1 p.m. Friday, according to owner John Pyland. He says it's because temperatures are below normal for this time of year in the area.

"We haven't had a freeze like this in many years," said Pyland, 52, a heating, ventilation and air conditioning technician with 30 years of experience.

It was lightly snowing and 27 degrees just before 1 p.m. Friday as Pyland's team replaced a heating unit and condenser at a residence on Middle Warren Road. They were finishing up a job that was first called in the day before.

Pyland said a woman who lives at the residence told him her daughter, who lives in the house, decided to stay with friends because it was so cold inside.

Technician Kyle Witt, 28, said most of the calls SEARK Heating and Air have received deal with aging heating and cooling systems.

"They're about 15 years old, which is their life expectancy," Witt said. "The older ones cost more to fix, so you're better off replacing them."

Witt, along with fellow White Hall resident Colton Curtis, 23, learned about HVAC systems from Pyland at Southeast Arkansas College. Pyland taught at the college for seven years before purchasing his company from George Vontungeln on Jan. 15, 2020.

The arctic blast that's pummeling Arkansas is keeping heating contractors busy in an area where they usually find the most work repairing air conditioning systems during the days of summer.

"On summer days, when you're doing a changeout in the attic and it's hot, summer is hell," Curtis said. "During the winter, it's not that bad. When you're working with tools, your knuckles feel like they'll bust open."

Technicians at Scott Systems Heating and Air in Pine Bluff have been busy as well, owner Janet Hartz said. She added that Scott Systems has received "quite a few 'no-heat' calls.

Hartz said that to handle the increased number of service calls, some former technicians who have moved on to other jobs with the company "are now helping us out so we can keep up. We're blessed as a company that we have people who are cross trained."

She said sometimes the problem is as simple as a filter that has become completely clogged and is not allowing a unit to heat properly, but occasionally it is something more serious. All in all, however, central heating and air conditioning systems work much harder as air conditioners than heaters because of the harsh summers and mild winters. Consequently, the calls she gets in the winter don't come near the calls during the long summer months.

"So this weather will be here and gone before you know it," she said.

One of Hartz' service technicians, Nakia Fisher, said Friday during a service call that he was seeing a variety of problems with systems, but not many that were serious. One thing that will help a system, he said, is for the filter to be clean. That, he said, will allow it to "breathe better and operate better."

Asked what residents can do on a night when the low is forecast to be in the single digits, he said for them to set the thermostat between 70 and 74 "and let the system do its job."

"You don't need to set it at 90 degrees," he said. "The unit will cut on and off, and you may have to put on a sweater in the house. But if you overwork a system, that's when energy bills go up, up, up."

The cold weather will also challenge water pipes in Pine Bluff. Plumber James Travelstead said his workplace, Ellis Plumbing, hasn't received as many calls this week due to freezing, but that's "definitely" going to change soon.

"The highest above freezing is next Friday," Travelstead said. "I'm assuming it's going to be really bad after that. Everybody's going to be without water for days, I assume."

To guard against the perils of frozen water, Travelstead suggests residents leave faucets dripping overnight, cover vents or outside hydrants, or insulate piping in their homes.

He said he expects the number of calls to his shop to increase next week because the ground must freeze over time before the piping will.

"I've only been doing this about five years or so. Generally when it first starts sleeting or there's ice and snow, the first two or three days, it's not that many calls. You may get one here or there where they had a line that was out of the ground or wasn't insulated or something like that," Travelstead said. "Generally, if it freezes for two to three days where the ground freezes solid, the pipes will eventually freeze, whether the pipes are insulated or not. It's dependent on the temperature."

The nature of a majority of calls likely will involve aging, frozen pipes that either crack, fracture or burst, Travelstead expects.

"Once the water starts expanding, it's definitely going to bust," he said.

Byron Tate contributed to this article. 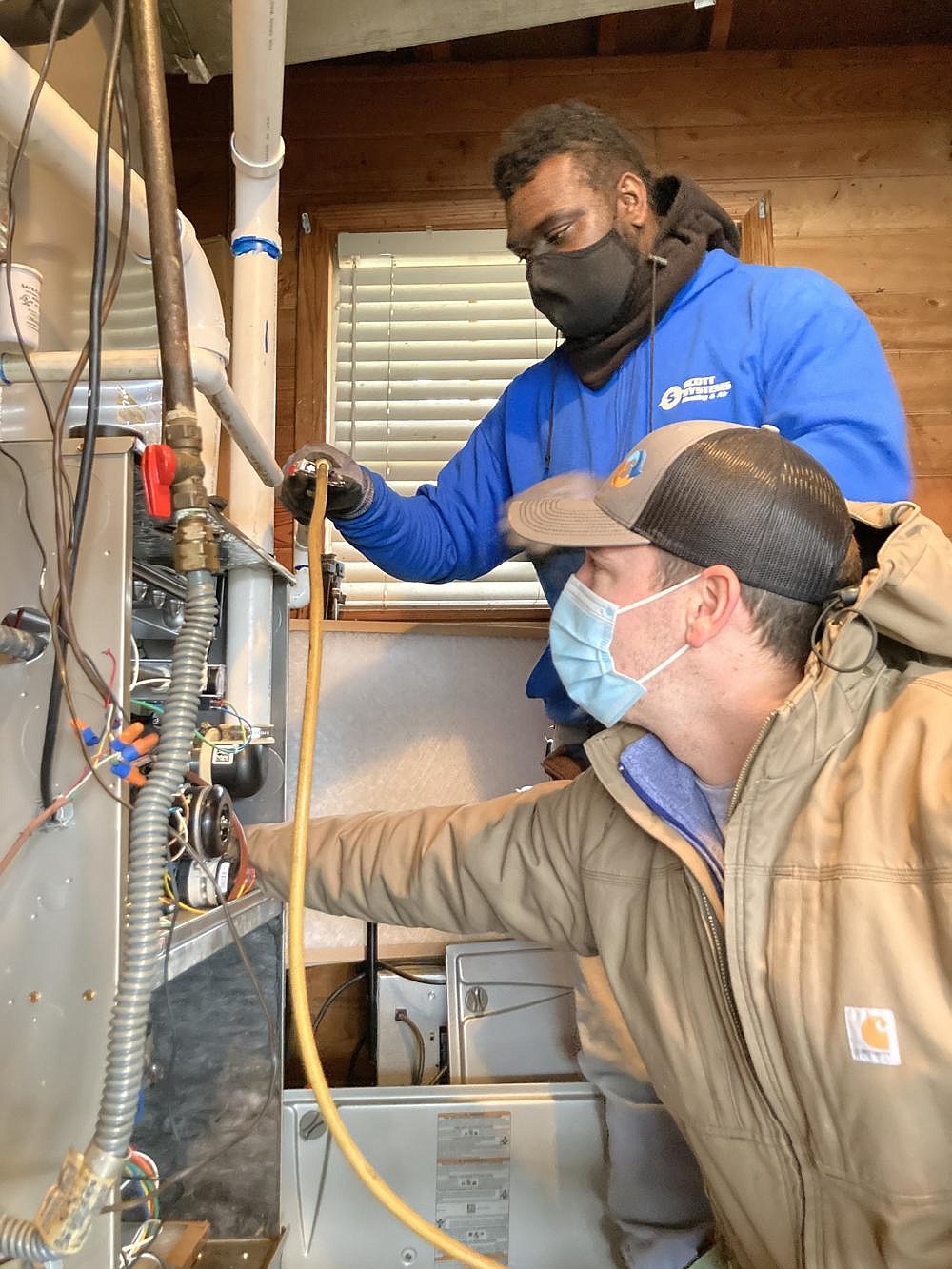 Nakia Fisher (standing), a service technician for Scott Systems Heating and Air, out on a service call Friday, said residents should make sure the filters on their furnaces are clean. Assisting Fisher on the call was Aleck Wilson, a maintenance technician. (Pine Bluff Commercial/Byron Tate) 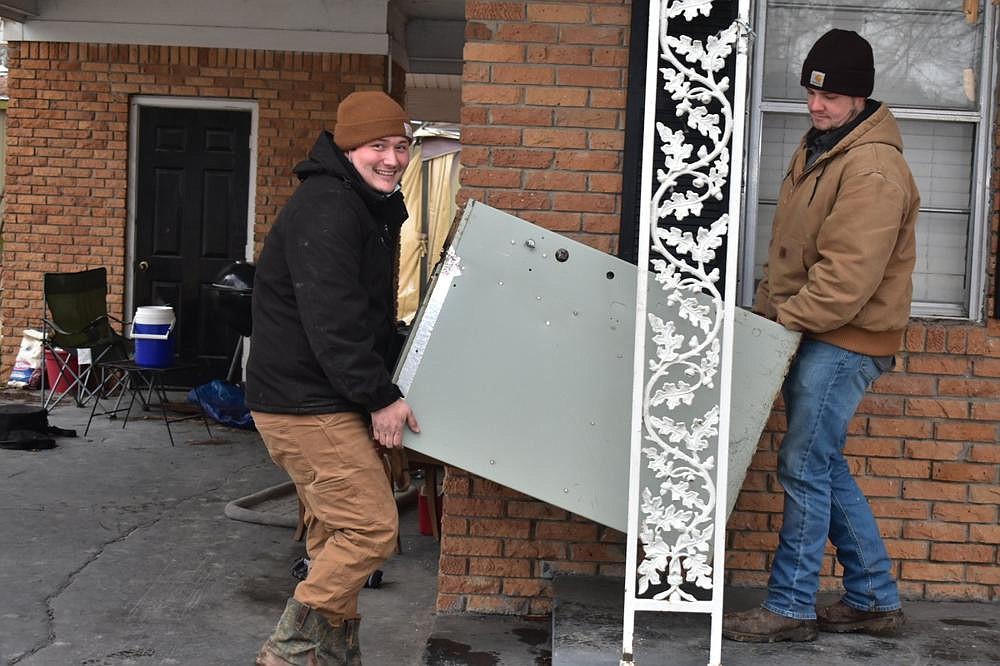 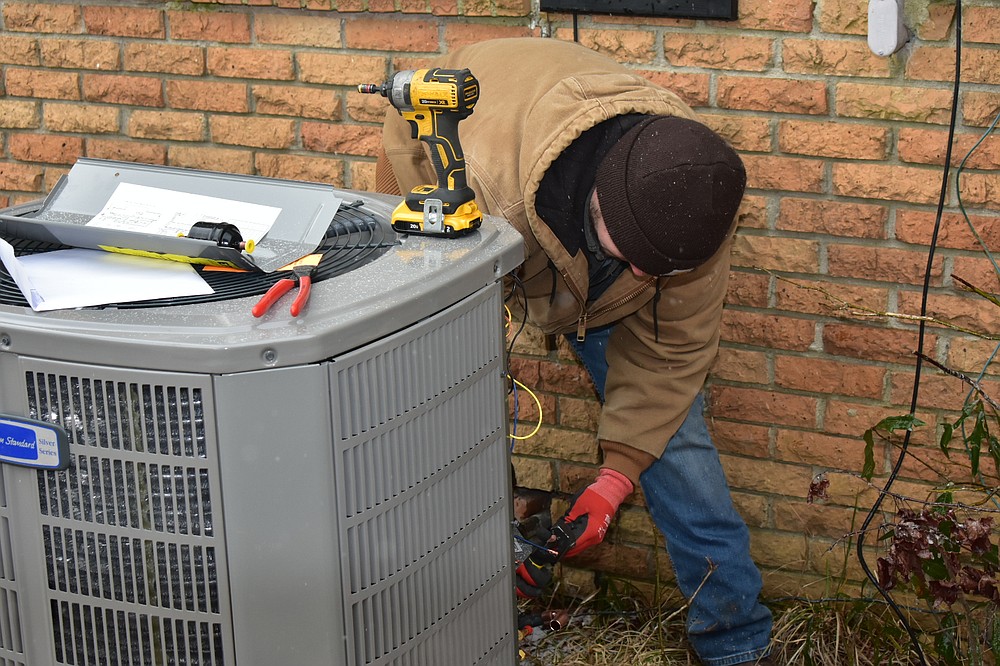 Kyle Witt, a SEARK Heating and Air technician, prepares the copper to set up a unit outside a residence on Middle Warren Road on Friday. (Pine Bluff Commercial/I.C. Murrell)
ADVERTISEMENT